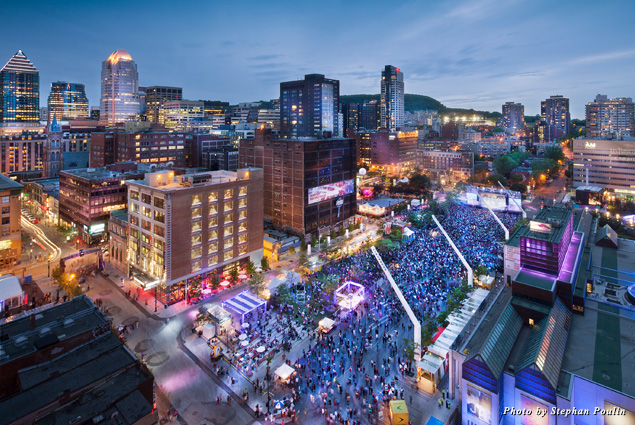 Lovers of “the beautiful game” will have ample opportunity to see top-tier soccer action up close when the FIFA Women’s World Cup comes to this beautiful city, or la belle ville, as Montréalers like to call it. It’s not just a perfect match for the World Cup matches; visitors will have the opportunity to experience the city’s vibrant, four-season arts and cultural scene, its international caliber restaurants, exciting nightlife, world-class shopping, and everything else that contributes to Montréalers’ irrepressible joie de vivre.

That Montréal was selected as a host for the FIFA Women’s World Cup is only natural insofar as the city’s well-known appetite for life and celebration also finds its expression in its love of both amateur and professional sports. Speaking of soccer, the team’s Major League Soccer team, the Montréal Impact, drew record crowds to Olympic Stadium (site of the 1976 Summer Olympics) earlier this year where they went deep in the prestigious CONCACAF Champions League tournament.

When it comes to sports, there’s a lot of love to go around, with much of it devoted to the National Hockey League’s Montréal Canadiens, the most storied franchise in professional hockey and also the winningest with 24 Stanley Cups. The Canadiens play out of the downtown Bell Centre, the busiest arena and entertainment complex in North America and a frequent host of world renowned music artists, the homegrown Cirque du Soleil, Disney on Ice, and the like. It also hosts boxing and UFC events, many of which featured three-time welterweight title-holder Georges St-Pierre, considered an icon-verging-on-saint in Montréal, where he lives. 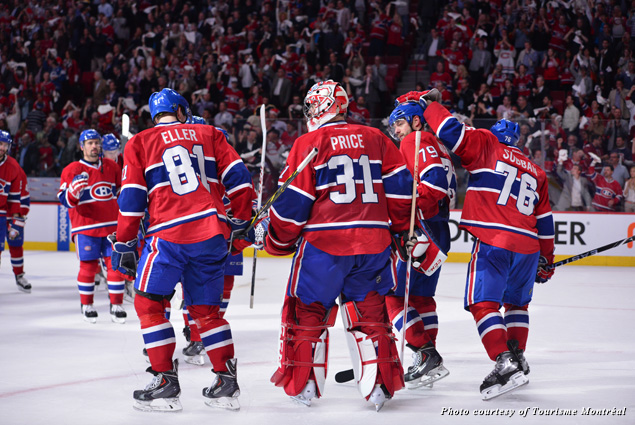 Outdoor sporting events are also enormously popular. Following a record-setting 2014 edition of the Rogers Cup in Montréal, which featured the world’s top-ranked women tennis players, including hometown favorite Eugenie Bouchard, the 2015 installment now sees the men take a kick at the Cup at Uniprix Stadium. Speaking of stadiums, Percival-Molson Stadium is home to the city’s pro football team, the Montréal Alouettes. It’s situated on the eastern flank on Mount Royal, the dominant geographical feature of this island city that’s set like a jewel in the majestic St. Lawrence River.

Preparations for Montréal’s 375th anniversary in 2017 are already underway and will showcase the unique Old World European charm and cutting-edge modernity behind such world-leading industries as aeronautics, information technology, and biotechnology as well as significant innovations in the arts and multimedia. Indeed, Montréal has emerged as a hub for creativity and innovation, as evidenced by the annual, outside-the-box business conference C2 Montréal, whose keynote speakers have included filmmaker James Cameron, entrepreneur and adventurer Richard Branson, and actor Alec Baldwin.

Montréal is far from all business, however. The unique combination of French and English cultures acts as a stimulant for creativity and conversation in both official languages and drives a thriving arts and culture scene that puts a high priority on having fun. Indeed, when it comes to celebrating, no one can hold a candle to Montréal. There are more festivals than there are weeks in a calendar year. In the summer months, the Montréal International Jazz Festival welcomes approximately two million visitors to its 650 indoor and free outdoor performances located primarily in the beautifully conceived downtown Quartier des Spectacles theater district. Similarly, the Just for Laughs comedy festival, the largest of its kind on the planet, brings A-list comedians and Hollywood stars to its venues in the Quartier des Spectacles. In the wintertime, Igloofest throws a massive multimedia dance party in the city’s historic Old Port, and MONTRÉAL EN LUMIÈRE turns the Quartier des Spectacles into a seasonally themed carnival of outdoor food, music, fun, and much, much more. 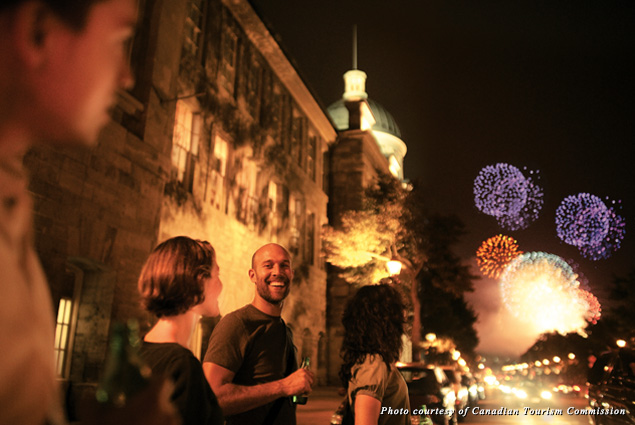 A short hop across the St. Lawrence River from downtown will find you on Île Ste-Hélène, once the site of the Expo 67 World’s Fair, now home to the recently reimagined Casino de Montréal and its top-shelf eating and entertainment options. The island is a fun-seeker’s dream, no matter which direction you go. Six Flags amusement park La Ronde dominates the eastern end, while Parc-Jean Drapeau (the site of the über popular Osheaga Music and Arts Festival and home to the weekly Piknic Électronik outdoor dance music party) provides a picturesque setting in the west. Head to the northern shore of the island to take in the Montreal International Fireworks Competition on select dates throughout the summer, and to the south is Circuit Gilles-Villeneuve, the F1 track for the annual Canadian Grand Prix, which draws hundreds of thousands and turns all of downtown Montréal into a giant party during the first week of June.

Despite having a population of 3.7 million people (comprised of some 80 different cultural groupings), Montréal has a smaller city feel while enjoying all the amenities of a large modern metropolis. One of the chief fringe benefits of its cultural diversity is the city’s raging restaurant scene. Parisian-styled bistros, lively cafés, burger bars, casual eateries, and upscale restaurants all conspire to make the city a foodie paradise.

For Montréalers, food is a way of life. And a multicultural population combined with epicurean innovation has translated into more than 6,000 restaurants citywide (fun fact: it has the most restaurants per capita in North America). All across town, Montréal’s master chefs have been creatively crafting the city’s platinum reputation for culinary excellence to rival that of other major cosmopolitan centers. And while it’s impossible to eat everywhere, Montréal Restaurant Week in the fall offers gastronomic connoisseurs an opportunity to sample many of the city’s best and most innovative kitchens at cut-rate prices. 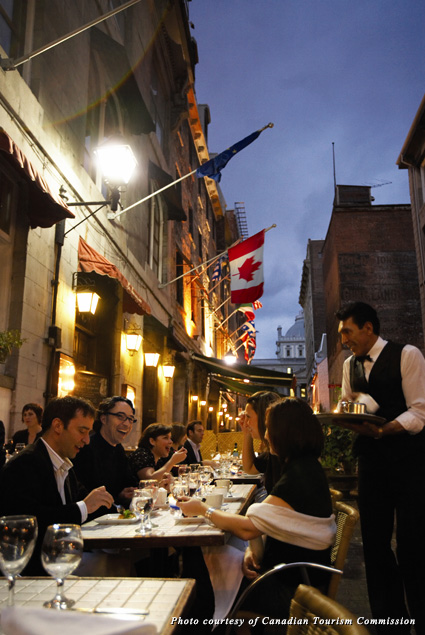 Many of the city’s restos of repute are located in the architecturally distinct Old Montréal district, which features cobblestone streets and Greystone buildings, many housing art galleries and boutiques. Here you will find the towering and ornate Notre-Dame Basilica, City Hall, and the Marché Bonsecours, among other architecturally significant edifices. It’s a magical area of Montréal that’s highly conducive to walking, as is, in fact, almost all of Montréal, which is safe, friendly, and easy to navigate. It is part of the reason why the city also popular with shoppers.

The other part of the reason it’s popular with the purchase-minded is the truly mind-bending selection of consumer goods. From high-end designer works to home décor and rare vintage pieces, Montréal offers up a wealth of shopping experiences. In fact, Montréalers’ legendary love affair with browsing and buying has given rise to hip boutiques, haute couture shops, and exclusive galleries that suit every style. From international labels to exclusive creations by Québec’s renowned designers, it’s there for the finding, even if you have to make the search subterranean. To wit, below the street-level shops there exists a vast underground pedestrian network—often referred to as the “underground city”—featuring 20 miles (33 kilometres) of brightly lit passageways connecting to more than 1,700 boutiques and businesses as well as hotels, subway stations, movie theatres, entertainment venues, restaurants, museums, and other attractions. 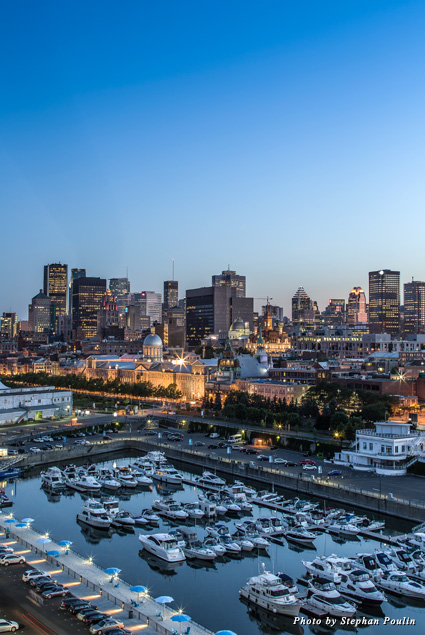 And the underground city isn’t the only thing that goes the distance: Back up in broad daylight, approximately 310 miles (500 kilometres) of bike paths—including the longest in-city cycling route in North America, which wraps right around the island—connects Montréal’s 1,000-plus parks and green spaces, making it easy for travelers to see and enjoy the city at their leisure. When it comes to joie de vivre, look no further than Montréal.