Yogawoman Is Changing the World, One Downward Dog at a Time 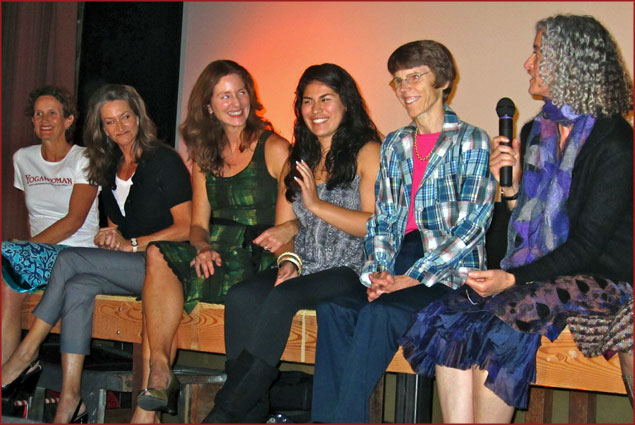 Yoga has traditionally been dominated by men. The same is true for the film industry. Lately, though, there has been a shift. It’s more noticeable in yoga, where 85 percent of the discipline’s devotees in this country today are women.

It’s less obvious in the film industry, where women are more often the objects of powerful forces than the instigating force behind them.

I attended the San Francisco premiere of “Yogawoman” last week. There are no men in the film.

It was an intentional choice, explained Michael McIntyre, who produced the film along with his wife, Kate Clere McIntyre, and Saraswati Clere. “If there were men in the film, they’d just be talking about women the whole time anyway,” he joked with the audience at the premiere.

The film weaves a web, connecting women all over the world, with all different identities, through their passion for yoga. The film takes you to Kenya, Tokyo, Manhattan, and Australia among other places.

The women in it are incredible. Each is fighting her own battle, against AIDS, cancer, incarceration, or just struggling to find strength through the trials of everyday life.

Yoga, the film suggests, can be a powerful force for all different kinds of women in their various stages of life.

All the proceeds from the premiere went to benefit The Art of Yoga Project, which is featured in the film and brings yoga to teenage girls California’s juvenile detention centers. “It’s a beautiful program,” Kate said, “that allows these young women to use the tools of yoga to grow, be empowered, and see the beauty in themselves.”

The film is available for purchase online. You can also sign up online to host a screening in your community.

The McIntyres believe in the film so much that they took out a mortgage on their house to make it. It was a bold move, one which hopefully will pay off. It should. It’s a powerful film. It deserves its place among the important films in the yoga tradition, the women’s empowerment movement, and the human one.