Wines of the Castilla-La Mancha Region in Spain 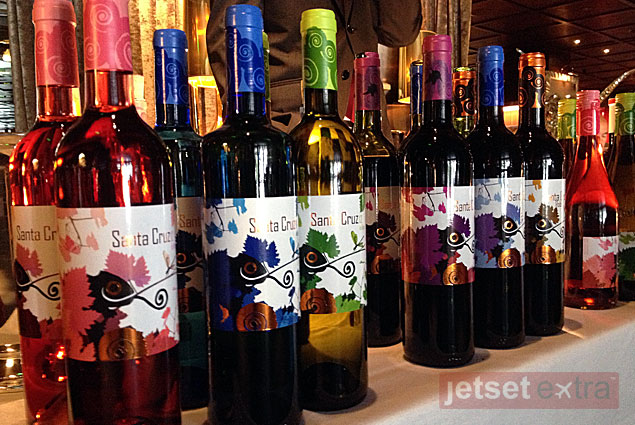 In the center of Spain sits the Castilla-La Mancha region, a place full of history, tradition, and wine. The latter is the reason I ended up at The Bazaar by Jose Andres at the SLS Hotel Beverly Hills one afternoon, to sample wine from 25 wineries in the region. Considering the fact I was responsible for driving myself to and from the event, and that I had work to do once it was over, I was unable to sample every wine the winemakers had to offer, but I did my best to get a good representation of the region.

I began with the whites, sampling Vinos & Bodegas’ icy, floral Barón de Larrainz White 2011 and refreshing Imperium Vini Sauvignon Blanc 2010, which featured hints of tropical fruits such as pineapple. Brothers Roman and Santiago Cantareto created the winery in 1997, carrying on five generations of a winemaking legacy. Their goal is to combine tradition with technological innovation to produce wines with their own personalities.

At the Bogarve 1915 table, I made the transition from white to red, beginning with a taste of Lacruz Vega Sauvignon Blanc 2012; I enjoyed its notes of passion fruit and pineapple. The winery’s Lacruz Vega Verdejo 2012 had a good bite and tasted of apples and pears.

Moving on to Bodegas El Progreso, founded in 1917, I enjoyed the Ojos del Guadiana Tempranillo Joven 2012 and the Ojos del Guadiana Crianza, which was aged in an oak barrel for six months. At the Bodegas Cristo de la Vega table, I tasted the notes of red berries in the young Marques de Castilla Red Tempranillo/Syrah/Merlot 2012, a gold medal winner at the Concours Mondial de Bruxelles in Belgium, a bronze medal winner at the Challenge International du Vin in France, and a bronze medal winner in the United Kingdom’s Decanter Magazine in 2008. I also sipped on the smoky, spicy Yugo Reserva 2007 with hints of vanilla.

My favorite wine of the event, however, came from Finca la Estacada. The winery’s Finca la Estacada Rosé 2012 stole my heart due to its semi-sparkling quality. I first fell for sparkling red wine during a month-long stay in Italy (where I could find a decent bottle for 4€ at the local market), and I was saddened to find it was difficult to obtain once back in the States. Thus, Finca la Estacada’s semi-sparkling rosé was a must-taste, and I was a huge fan. I also enjoyed sampling the winery’s Secua 2009, which is 80-percent Cabernet and 20-percent Syrah and a gold medal winner at Concours Mondial de Bruxelles, a silver medal at the Bacchus Awards in Spain, a silver medal winner of the Best Spanish Wines for Asia, and a gold medal winner of the Berliner Wein Trophy in Germany).

Made famous in the literary classic “Don Quixote,” Spain’s Castilla-La Mancha region is considered the largest vineyard in the world with more than 1,240,000 acres used for growing vines. The region boasts 46 grape varieties, 23 red and 23 white, which grow in a land composed of limestone clay; a great variety of layers of subsoil make Castilla-La Mancha an ideal enclave for growing grape wines.