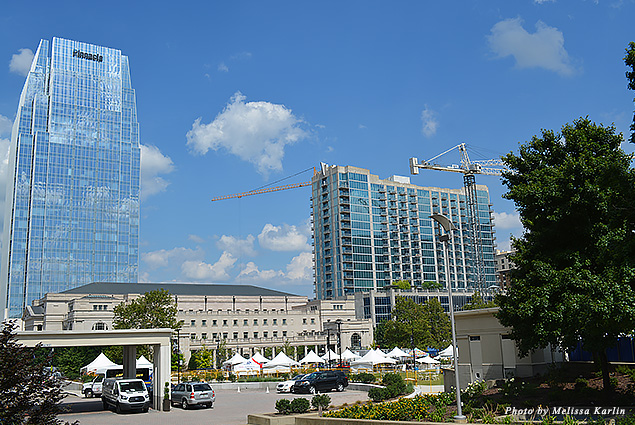 Nashville is a city in the midst of immense change. Over the past few years, the southern town has experienced such intense growth that it hit No. 20 on Forbes list of the fastest growing American cities in 2015. It feels like a town on the cusp of becoming a city, building itself up—cranes litter the sky as holes create gaps down below—and it is absolutely wonderful to observe. Everyone in town seems excited by the influx of new restaurants, sites, and attractions.

Nowhere is this more apparent than in the Gulch, an area that was once an old railway depot and is now a trendy, contemporary neighborhood. It feels a little bit like Southern California with all the new mixed-use apartment buildings, which lead to new restaurants, cafés, bars, and hotels. At the five-room 404 Hotel, you can experience this change up close and personal. The hotel is clean and modern and features “invisible service” with keyless entry, Malin + Goetz toiletries, an in-room refrigerator with complimentary beverages including local beer selections, and plenty of space to spread out.

The hotel has two types of rooms: the King Suite and the King Suite with Loft. Staying in the King Suite with Loft was like having a small apartment as a base and featured a bathroom of which dreams are made. Though Nashville has more of a country music reputation, the design of this hotel bared none of those touches. It was sleek, minimal, and a little bit French in its aesthetic. The cool tones, however, didn’t make for a cold experience (quite the opposite). I felt immediately at home in the space, like I was entering my dream home. 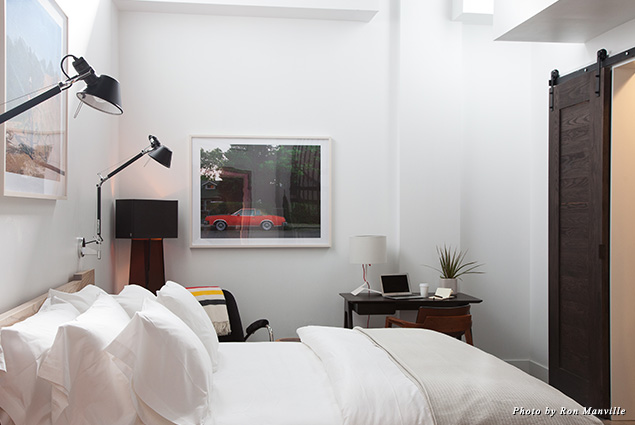 The upstairs portion of the room was a living room seemingly designed for meetings, perfect for the music industry professionals who frequent the city. Though these grand designs and beautiful offerings made the hotel a wonderful choice, it was also the little things that helped to make our stay truly fantastic. There were fresh pastries from a local bakery every morning and fruit and hot drinks available from the common area all day long. And, even though the hotel has “invisible service,” the hotel staff is incredibly attentive; all you have to do is call a phone number if needed. The small hotel also offers “Run of the House,” so you can book the entire place if traveling with a larger group.

The location is near many dining options, an organic and health-oriented grocery store, and a brilliant little wine shop. There is also the fantastic Bond Coffee Company just across the road, a perfect place for a light and delicious lunch.

However, a stay at the 404 means one doesn’t have to go far to enjoy a spectacular meal and excellent libations. Simply visit the 404 Kitchen in the front of the hotel, a true marvel of elevated Southern and European cooking. We went for drinks one night and dinner the next and were lucky enough to have the same person helping us both nights. His name was Galen and he was incredibly great at taking what I was craving at that particular moment and translating it into something I absolutely adored. Both times I was uncertain, but he convinced me! He knew exactly how to recommend to my personal cravings and offered the same to those dining with me, crafting a perfect experience for all guests. 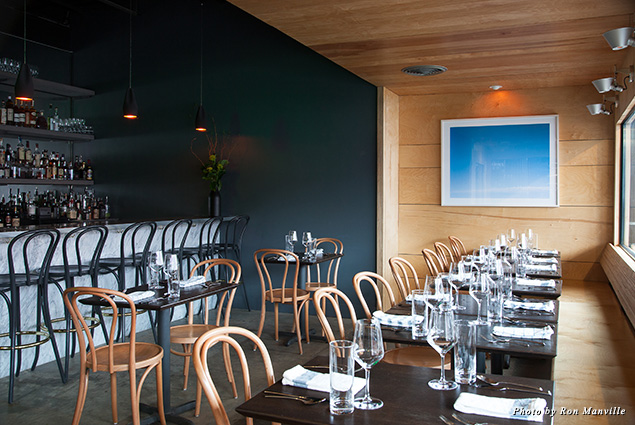 The restaurant features a rotating menu focusing on the best local produce and ingredients. It was even a 2014 James Beard Award semi-finalist for Best New Restaurant. Chef Matt Bolus and his team are truly creating something wonderful here. It’s not that the food was highly experimental but that they were taking something that has always been there to new heights.

On the more touristy side of Nashville in the heart of the downtown strip of honkytonks, the Ryman Auditorium recently completed a $14 million expansion. This added a much-needed welcome center to the old tabernacle building, allowing for them to cater to tourists with a gift shop, a café, and a new “Soul of Nashville” multimedia introduction spectacular. This show is almost difficult to describe. It’s a bit like one of those displays you would encounter at Disneyland—like Pirates of the Caribbean, with animatronics acting out tales of times gone by. But instead of robots moving oddly on stilts, it’s digital, with lights and music interacting with screens in a creative, inventive way and completely immersive. I had never experienced anything quite so well done before; it was staggering how interesting and exciting it was.

Walking through the Ryman afterward, I overheard someone say the “Soul of Nashville” was well worth the price of admission, which is hefty at $20 for a personal tour or $27 to go on a guided backstage tour (at the time of writing). I was actually inclined to agree. It was great introduction to a music hall of which I had no prior knowledge, and one that truly held my interest.

While exploring the Ryman I kept coming across these amazing show posters. Each one was crafted by Hatch Show Print, a historic print shop once found right across the street from the Ryman Auditorium. Though it moved into a new space in 2013, it is still a relatively new tourist attraction within the Country Music Hall of Fame. The print shop offers a tour of the facilities, which involves time in the print shop space and in a classroom covered in posters of shows past. While in the classroom area, guests learn more about the history of the print shop with regards to its music background and press their own print, a lovely little souvenir to take home. It is a fabulous experience if you are interested in vintage printing, music history, or typeface design. 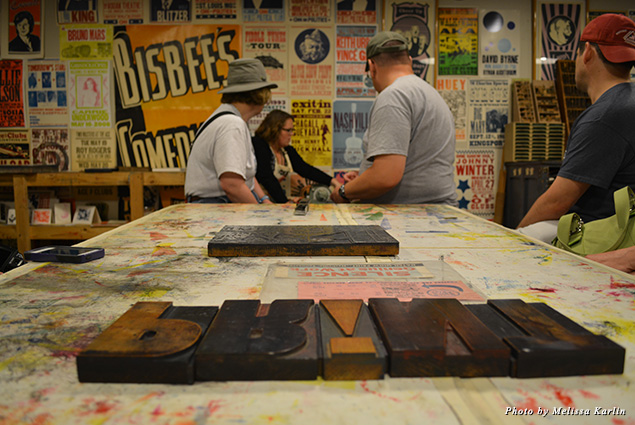 And of course no city tour would be complete without some drinks, and there are a couple of new options for that available to Nashville visitors. Located in downtown’s Marathon Village, the highly experimental Corsair Distillery has been making award-winning whiskeys since the late 2000s. It is known for whiskeys made with oats and quinoa along with other wild and interesting ingredients. But now, this site has a new offering by way of libations: beer! It is taking its playful nature and applying it to brewery practices. These brews are only available on site in Marathon Village at the moment, but that may change soon. The distillery has out-grown its production facilities in the Marathon Village space and will soon move its spirit production to larger accommodations. This will give way to an expanded brewery operation in Marathon Village and make the entire location a brewery. 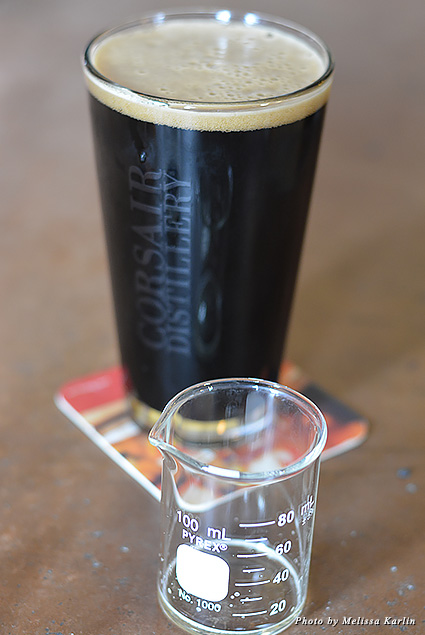 For a great night out, head to Pinewood Social. The establishment is a complex of fun and relaxation for those who enjoy a good cocktail in a well-designed space. It features two bars, each with their own menu, a patio, dipping pools, a bowling alley, a restaurant, and a coffee shop. In fact, I enjoyed myself so much one night that I went back the next night. But to change it up I went from sitting inside at the bar to lounging outside at the dipping pools. It felt as though I had gone to two different establishments. At the indoor bar we chatted with the bartenders and explored the complex and interesting cocktails—such as the Venus Rosewater, their take on a Pimm’s Cup, and the spicy Shook from the Gate—with a guided hand. It was completely different to sit outside, with my feet dangling in a pool on a warm Southern evening and a tiki-style cocktail made in a converted AirStream bar in my hand.

But there was even more to do than hang out with a good drink. Pinewood Social offers games including bocce ball and ping pong on the patio, and the six lane bowling alley is made up of vintage reclaimed wood from Bowl O’ Rama in Indiana. All together these details give the place a real groovy vibe. On the whole, this place just oozes coolness.

Nashville is truly an amazing city to explore. There’s a unique vibe to the place that’s so much more than the country music Mecca it’s known to be. It’s cool but in a way that doesn’t try to be at all. And as more places open and more people come, I can only hope and imagine that this laidback feeling with a continual strive for excellence never disappears.