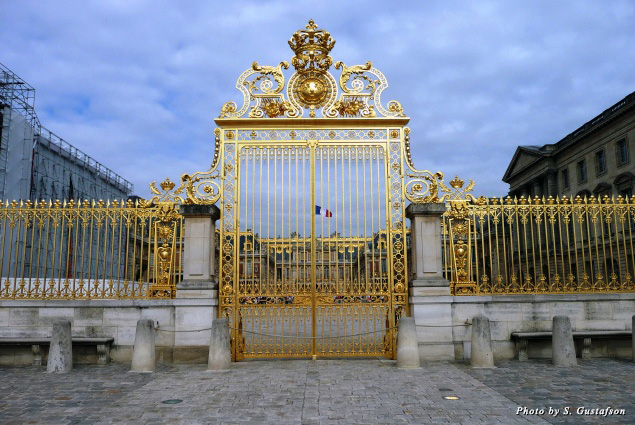 What used to be a several-hour carriage ride from Paris is now just a short train trip away, and it’s one that everyone should take. Many people think of Versailles only as a lavish palace and the reason for the French Revolution in 1789. But it’s more than that, which is why you should schedule it in your next Parisian adventure. 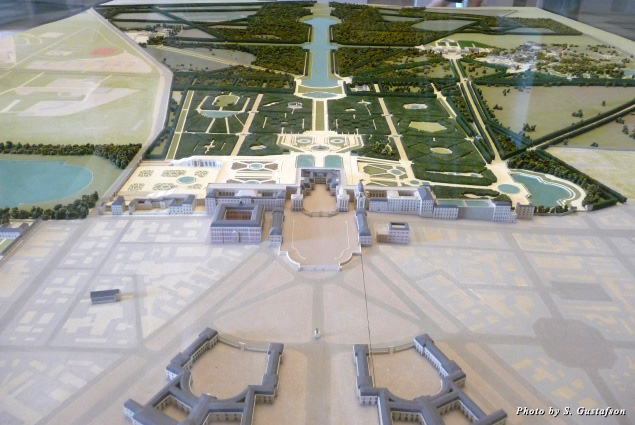 There are some important logistical details to remember when heading out to Versailles. The palace and the grounds are closed on Monday, so make sure you properly plan your visit. Because it’s all closed on Monday, the crowd on Tuesday is almost twice the normal crowd (many of them are those who forgot it was closed on Monday and are leaving Paris on Wednesday). The Paris Museum Pass covers main admission, but certain exhibits might require a supplemental charge. Even if you have your admission ticket, museum pass, press card, etc., you will still have to stand in the line outside the main entrance; everyone (except tour groups) goes through security from that one line. And finally, make sure that your camera batteries are fully charged because there are so many photo opportunities that you won’t be able to pass up.

Unlike other palaces and castles around the world, your visit to Versailles should be built around an entire day. There are fewer crowds in the morning (along with a reduced admission for entrance before 9:45 a.m.), which allows you ample time to wander throughout the main château at your leisure. You’ll want to roam from floor to floor, room to room to room before the tour groups and larger crowds arrive. 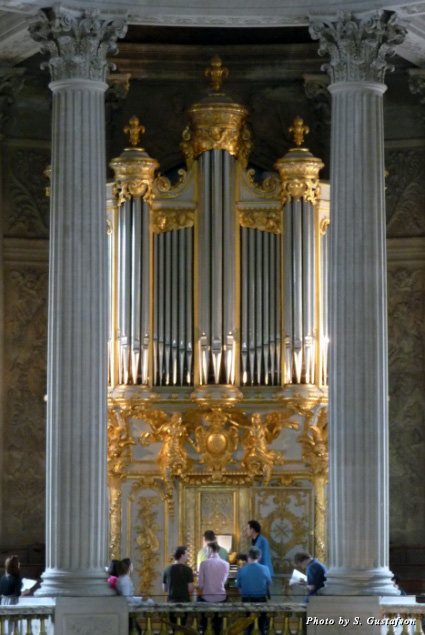 The best entrance is on the east side of the courtyard, where you’ll see the Hercules Drawing Rooms and the chapel. If you’re fortunate, you might be able to hear the organist playing the pipe organ in the chapel where the king’s visitors came to worship (and it was usually to worship him). As you weave your way in and out of each room and hallway, you’re bound to be in awe of the magnificence of each area and the way the rooms are able to take advantage of sunlight and views to the outside. 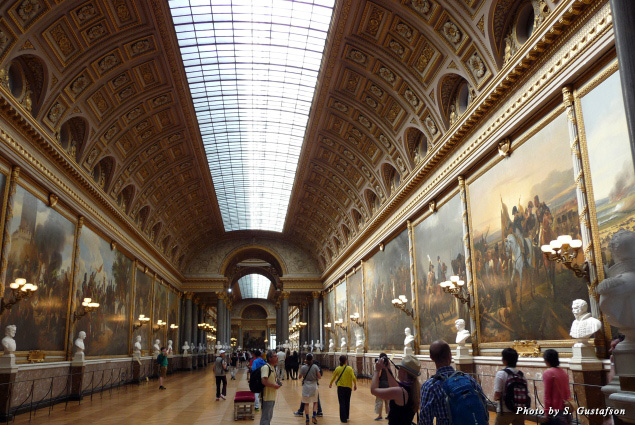 The one constant as you make your way through the château is the ceiling height. Higher ceilings naturally evoke a grander feeling, even if the rooms weren’t already large. But it’s the high ceilings that allow for the large paintings, the multiple levels of windows, and the grand visual experience of looking through a long series of arched doorways.

One surprising feature of the main château is the size of the king’s bedchamber. It appears to be one of the smallest rooms although it was centered right on the palace axis, and it had a marvelous view right out onto the Marble Courtyard. I don’t believe the king spent a lot of time in his bedroom looking out to see who was coming to visit (he usually knew anyway), but the design was done to represent that the king was at the center of everything. 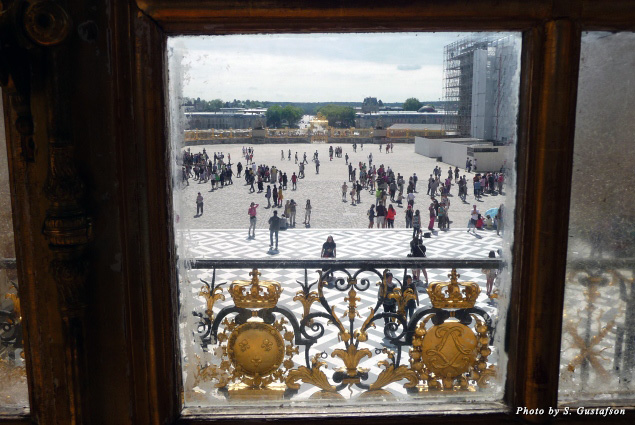 Although you could spend an entire day absorbing the beauty, the grandeur, and the history inside the main château, it would be a loss if you didn’t go out to the gardens and groves. Remember when I said Tuesday crowds were typically quite large compared to the other days? Well, I didn’t give you the entire reason up front.

Each spring, from April to mid-May, and then again from July through October, the groves of the Versailles Château come alive with energetic classical music. Called “The Musical Gardens,” the piped music plays from morning till early evening, as do the water displays in the Mirror Fountain. The music’s not in every grove, but when you walk from one fountain or grove to another—there are 28 of them—you’ll enjoy being surprised when the music comes alive. 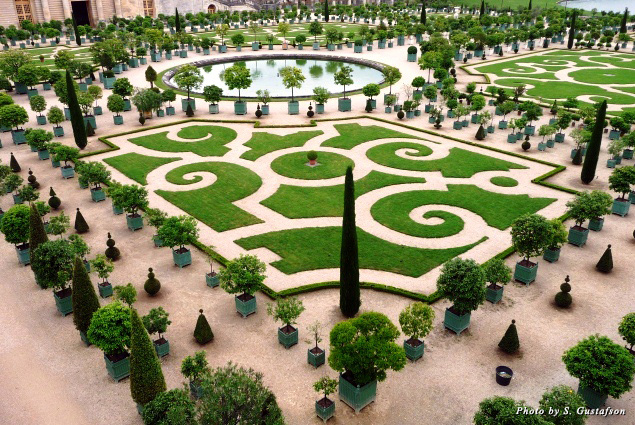 The Mirror Fountain is especially delightful as the water fountains are timed to frolic and dance along with the music. There is plenty of grass for seating, and the rhythmic beats bring smiles to all those around the 300-year-old fountain. Not to miss out on marketing opportunities, the Château de Versailles sells a CD of the music that’s played, and there’s a new CD each year—how’s that for marketing genius!

The expanse of the groves and fountains covers so much more area than the main château, and you’ll definitely get in your walking steps as you go from one area to another. It’s a little deceptive as you walk through the groves and move away from the château; there is a slight downhill incline that you don’t notice until you’re ready to head back—uphill. 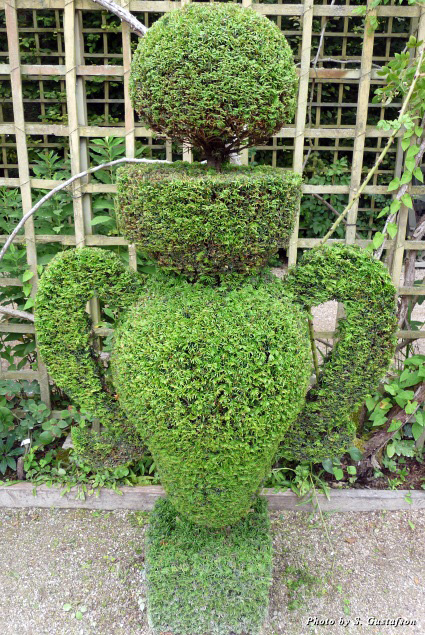 Shapes are abundant, whether they’re whimsical or plain ornamental. Framed cutouts are used to ensure consistency in the decorative bushes, and the faces in the fountains aren’t readily apparent at first glance. But once you see one of them, they all come into focus. 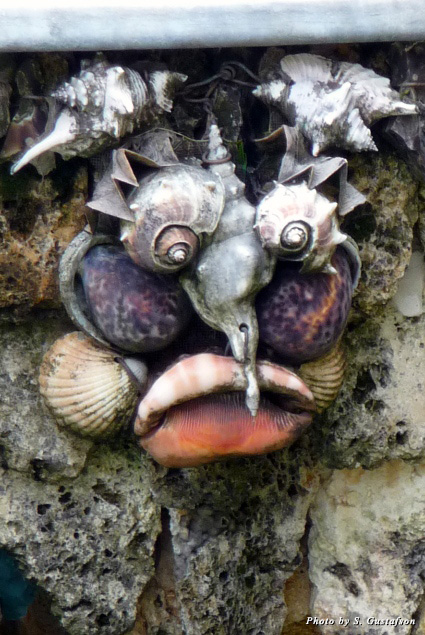 After you make your way back up the hill to the château and visit the WC and the gift shop, it’s time to stroll to the train station. There’s no need to be in a rush because the frequency of trains makes it very convenient for returning to Paris. And since all the trains go into Paris, there’s no need to worry about getting on the right train or the wrong train. The short, 35-minute ride gives you time to think about the majestic sights you just saw, organize your digital photos, or maybe just relax so you can head back out into town once you’re home in Paris, the City of Light.