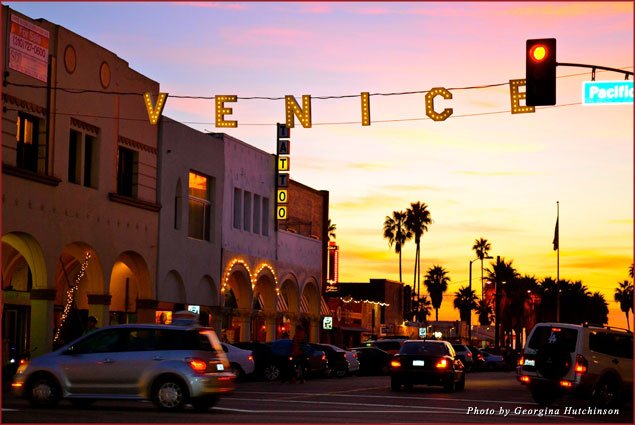 That has become my standard response when discussing my recent trip to Venice. The Southern California beach community was named after the iconic Italian destination, but that’s about where the similarities end. Even with the man-made canals, Venice Beach is quintessential Southern California. Miles of sandy beach parallel the Venice Boardwalk, a fascinating amalgamation of humanity so wonderfully bizarre that it’s almost a caricature of itself. 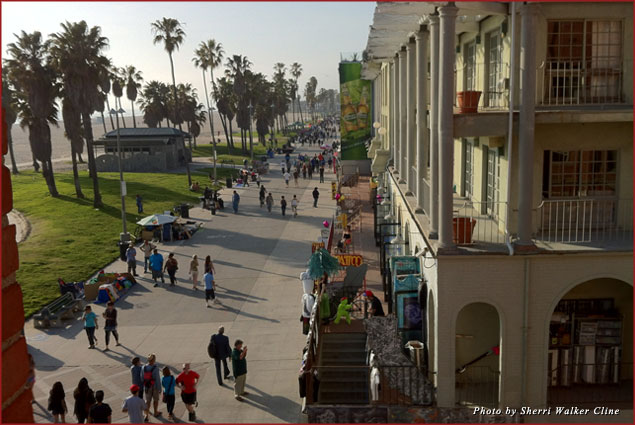 We spent three nights at the Venice Breeze Suites, a combination of long-term lodging and boutique hotel that offers a convenient accommodations right on the boardwalk. Our third-floor suite offered sweeping views of both beach and boardwalk, while giving us enough height to observe the boardwalk’s multi-ring circus from afar. One flight up was the hotel’s rooftop deck, which offered us a panoramic view of Los Angeles and its surrounding mountains on one side, and the Pacific and a sweeping sunset spectacular on the other. We spent one evening sharing wine and trading stories with other travelers long after the stars – of the celestial variety – came out. 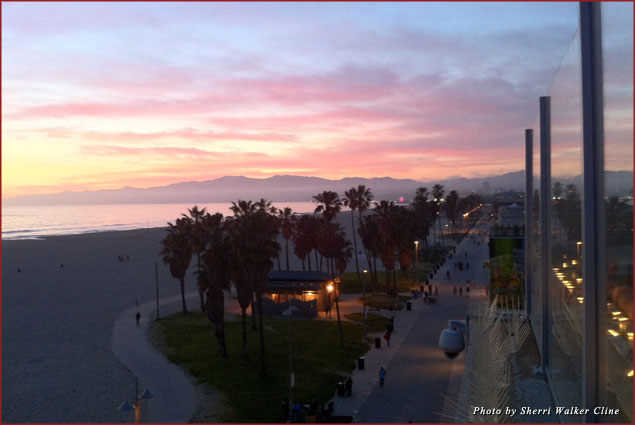 Long before the Venice Boardwalk wakes up, the susurrus of the sea begins to call you from sleep. We had plenty of time to brew a pot of coffee in the suite’s full kitchen while planning the day’s activities and enjoying the peaceful morning. The boardwalk wakes up slowly. Street vendors set up shop while negotiating with their neighbors. Buskers begin to tune up their voices and their instruments. And before long the view from our suite was of a mad spectacle of skateboard-pulling pit bulls, costumed street characters, and a cornucopia of the curious, the bizarre and the just plain weird. 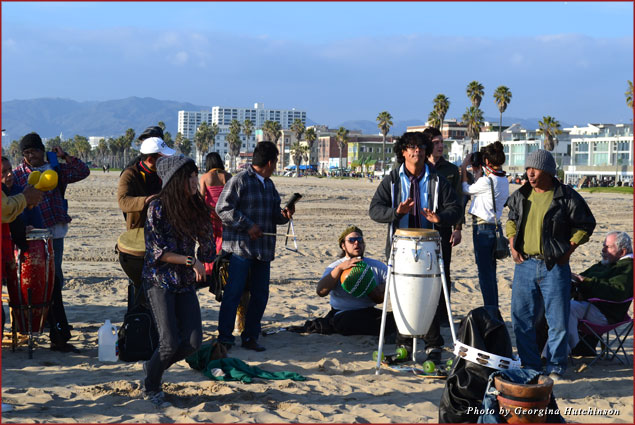 Just a couple of short blocks from the gritty quirkiness of the Venice Boardwalk is a mile-long stretch of Abbot Kinney Boulevard, which has a justly deserved reputation as one of the best stretches of street in Southern California. This utterly irresistible mile, between Venice and Main, brims with unique shopping, cutting-edge culinary experiences, and high-end people watching. The boulevard was named for the neighborhood’s founder, who had the vision to create the canals that would make Venice Beach a legend.

Abbot Kinney beckons shoppers from around the world, and we quickly found a few favorite spots along the famous boulevard.

Chocovivo produces amazing stone-ground chocolate using whole cacao nibs and whole spices. Their chocolate is sourced from an organic plantation located near where the Mayans originally developed chocolate. While that sounds tempting enough, they also offer chocolate tastings, making this a perfect spot to tempt your taste buds and please your palate. The spicy deliciousness of the Mayan Tradition bar was a favorite, but we also couldn’t resist the chocolate butter.

Made in Earth’s exotic gemstones amid stunning settings could very easily have thrown us deeply off our budget. Designer Bunny Bedi lets the gems speak for themselves, both in the jewelry and in sharing their various attributes.

Venice Beach is a muse. From the sublime sunsets to the quirky characters, inspiration is everywhere. The many fruits of that inspiration can be found both along the Venice Boardwalk and in the many galleries along Abbott-Kinney. Very Venice Art and Design Gallery was a perfect place to see a range of styles in every medium, from tile to puppets. 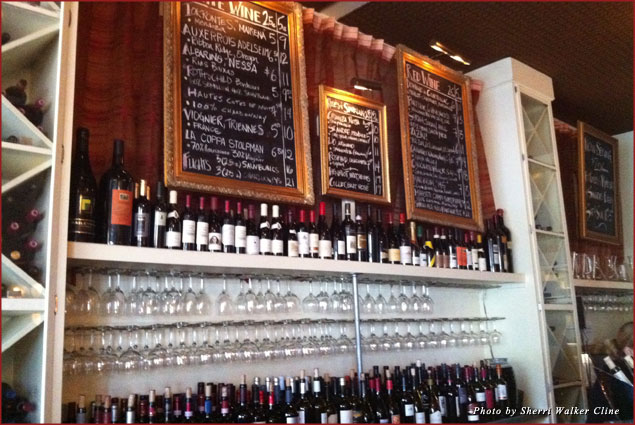 Dining in Venice Beach is a journey through the kitchens of some of the region’s top chefs. The neighborhood offers so many culinary hotspots you could spend months exploring them all. You can never go wrong at Hama Sushi, a fact which the throngs of people crammed cheek to jowl seemed well aware. We braved the crowds one evening and were glad we did. Gjelina is another popular hot-spot with a well-deserved reputation for culinary creativity. The wait here can be overwhelming – choose a late lunch or very early dinner and avoid the rush.

Our favorite was Primitivo. Even with all the options that Venice offers, we had to return several times. While the regular menus won’t disappoint, Primitivo bills itself as a wine and tapas bistro, and it’s in that arena that it really stands above the crowd. Sit at the bar and order from the tapas menu and take advantage of their hospitable wine philosophy. The wine list sports hundreds of bottles from every corner of the globe, plus they offer two different-sized glasses as well as flights and tastings if you’re not sure what you’re in the mood for. Whatever you end up ordering, it’s bound to go well with the bacon-wrapped Medjool dates with chorizo. 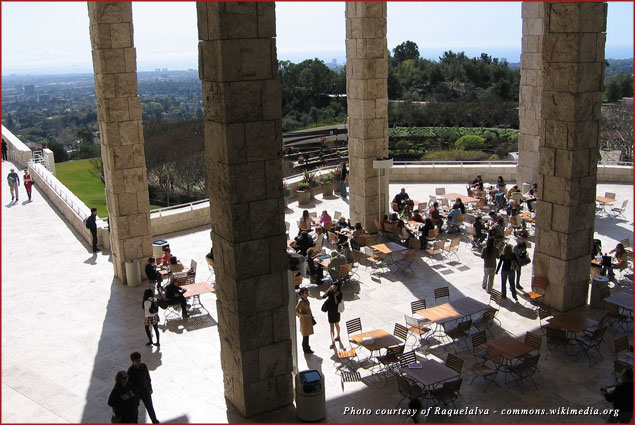 Venice is a quick drive (well, as close to such a thing as there is in LA) to any number of local attractions and we chose one of the biggest. The Getty Center is a both cultural icon and a national treasure, and is well worth being experienced again and again. Open Tuesday through Sunday, the Getty Center offers a diverse array of European and American manuscripts, paintings, and decorative arts in one of the world’s most impressive collections. Admission is free, but you’ll want to apply those savings and splurge on lunch at The Restaurant at the Getty Center, a dining experience nearly as impressive as its surroundings.

Perched high above the LA basin and overlooking the Pacific, the Getty, a bastion of classic art and architecture, has one thing in common with the gritty reality and pop culture immersion of Venice Beach. Both are essential parts of the Los Angeles landscape, quintessential experiences for both tourists and Southern Californians alike.

Oktoberfest at the Viceroy Smokin’ Hot on Melrose