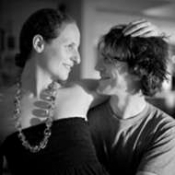 Anna Love is among the country's top family and wedding photographers, selected by San Francisco Magazine as one of the Bay Area's best and published nationally. She specializes in capturing intimate family stories and private moments in love. After a heartbreaking trip to West Virginia, where she learned about the devastation of West Virginia's eco system due to coal mining, she is committed to raising awareness about mountain top removal by coal companies. Over the past 12 months, Anna has returned to West Virginia to capture the life of the coal miners and photograph the mutilation of the Appalachian mountains.

Paul Corbit Brown has been photographing since he was twelve years old, the first man in his family to escape being a coal miner. His work has carried him throughout the United States, Mexico, Jamaica, Russia, Israel, Palestine, Kurdistan (Northern Iraq), Kenya, Rwanda, Laos, Thailand, Indonesia, and most recently Haiti. Brown has a gift for simultaneously accepting the humanity of each person he depicts and unsentimentally sizing them up. His photographs are clear-eyed looks at the difficult situations the individuals portrayed live in, but because of their directness and compassion they are hauntingly beautiful. He was acknowledged in 2009 by Frontline as one of the top 100 human rights defenders.