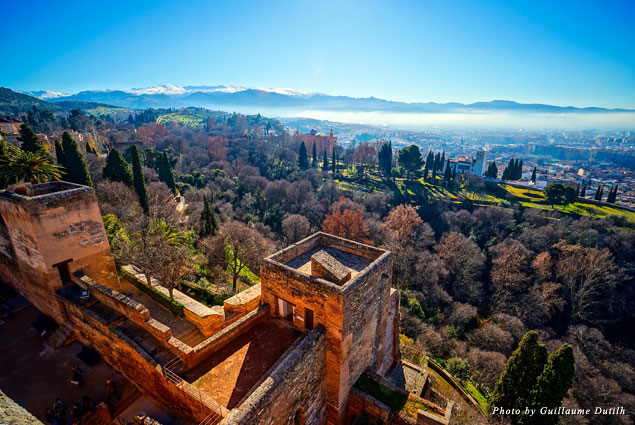 Andalusian Spain is arguably the most architecturally interesting place I have ever been. The Moorish influence is still prevalent today and even feels recent though the Moors vacated hundreds of years ago; we’d find it hiding in plain sight if we knew where to look. After a fews days of Andalusian immersion in Seville my partner and I were advised to do an overnight trip to Granada where we would see the Alhambra, an Islamic palace/fortress that dates back to 889 AD. No need to be convinced, we hopped in our rental car and were there in just a few hours.

We arrived at the Hostal La Ninfa, or so we thought. We were actually at the La Ninfa Restaurant in Plaza Campo del Principe. Luckily the restaurant owner, used to this confusion, directed us across the street to our quaint overnight home. The polka-dotted building was full of character, and the hostel manager was no exception. 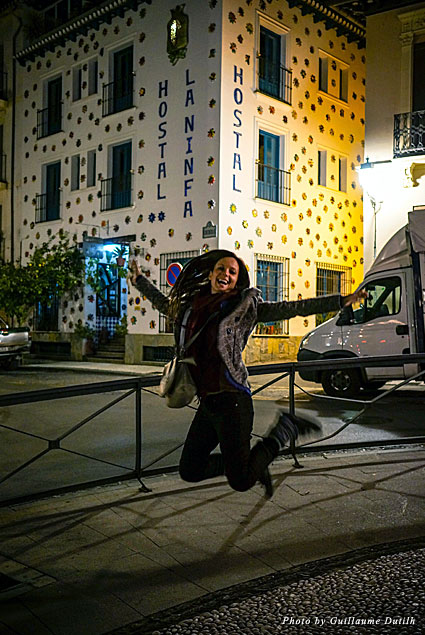 We rang the bell and our plump hostess welcomed us with a symphony of bubbly, tongue-twisting greetings. She then directed us to our private room, which had its own shower, double bed, and heater (a necessity in January). Compared to some of the other hostels I’ve stayed in, this was a palace.

The next morning we trotted down to the street for a quick tomato tostada breakfast, a Spainish favorite, before heading to the Alhambra. Time must have gotten away from us (although I’m not sure the bus system in Granada sticks to a strict timetable), and by the time we exited the restaurant we witnessed our bus simultaneously screeching past us. We glanced at each other, realizing we only had one choice: to out ourselves as tourists and chase the bus. We sprinted across the narrow street, frantically flagged down our modern day wagon, and jammed—and I mean jammed—ourselves inside.

As brisk as the winter weather was outside, our bus was the antithesis. Filled with a dozen bodies wrapped in scarves and coats, we had entered a mobile metal oven. I took the opportunity to nuzzle my travel partner, which is always enjoyable. The traveling can of sardines dropped us off at the top of the hill, and we entered the Alhambra.

Take the bus! It’s an exhausting hike up to the Alhambra and the streets of Granada are hard to navigate. 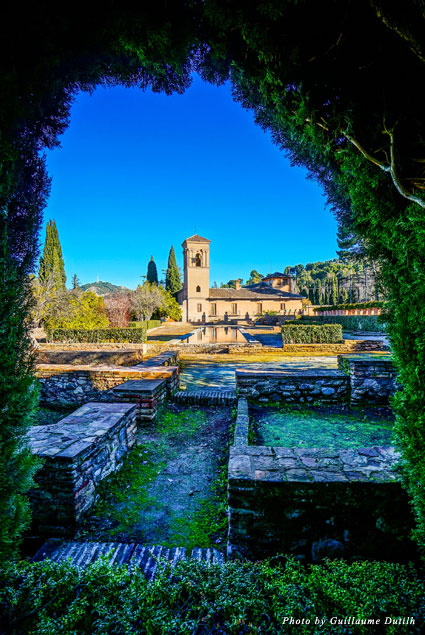 The major must-sees at the Alhambra are all inside the royal palace complex, but our palace appointment time wasn’t until 11 a.m. so we first visited the gardens and summer living quarters at the Palacio de Generalife.

You have to book ahead to visit the Nasrid palaces at the Alhambra. If possible, visit on a weekday and try to get the earliest appointment time possible. This will help avoid crowds of tourists. 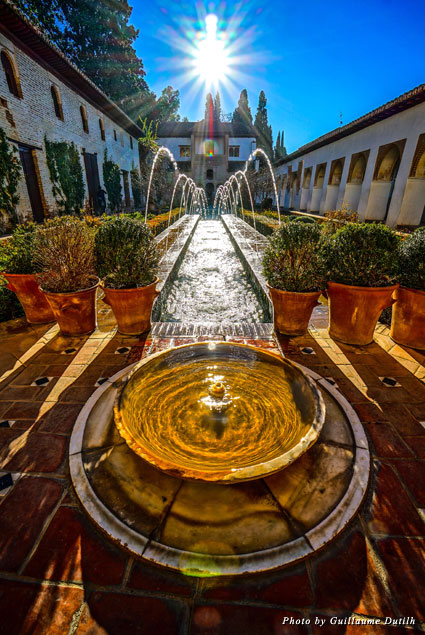 The Alhambra was built in sections over hundreds of years; thus, each complex has its own cultural and religious influence. The structures in the Generalife complex were constructed around 1300 AD, almost 500 years after the fortress area, making it a young appendage in the body of the Alhambra. As we crossed under archways and relaxed in the courtyards, I imagined the former kings and court members who strolled through on these same paths, hoping to escape royal duties. I think it would have been my favorite place inside the Alhambra if I were living on the property 700 years ago. 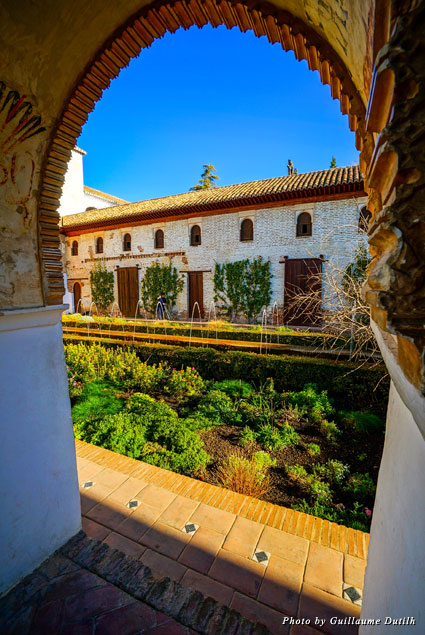 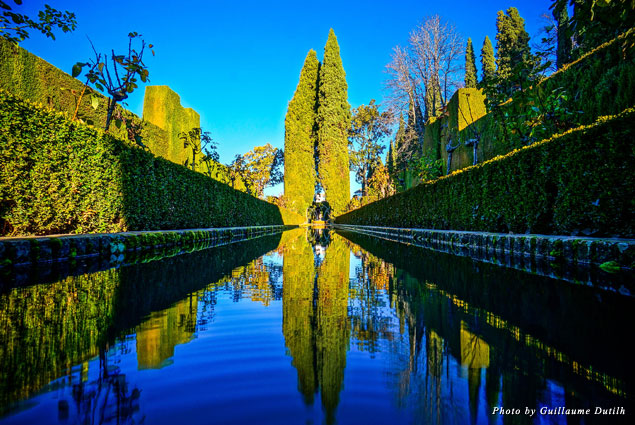 Next we entered the fortress built in 889 AD, back when the original purpose of the Alhambra was for defense instead of royal housing. As I wandered through the narrow staircases, I poked my head through the tiny holes constructed for lookouts. I imagined soldiers having to stare through those holes for hours, or days even, dedicating their entire lives to that one singular view and, although it is quite spectacular, thought about how it must have become underwhelming to even the most imaginative mind.

Make your way to the very top of the fortress, which provides a stunning overlook of Granada and its surrounding area. A great photo opportunity.

While exploring the brick and mortar of the fortress dwellings, I was taken aback by the small structures in which the soldiers resided during their meager off hours. These 10-by-10-feet squared rooms with dirt floors were shared with at least two other men! Not exactly a life of luxury. And where’s the latrine? I was afraid to ask. 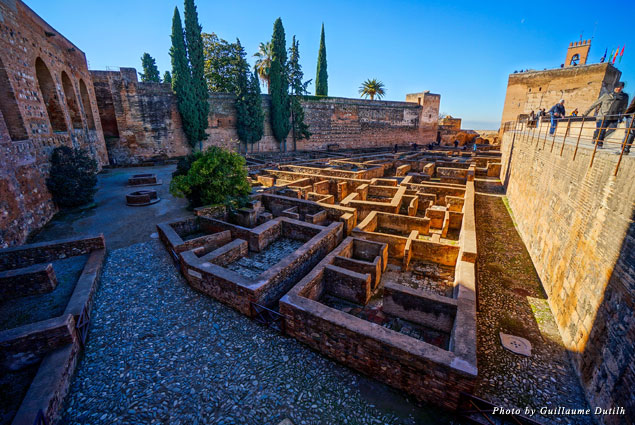 Finally it was time for a royal appearance in the Palacios Nazaríes (the palace complex). As we entered the homes of the Islamic sultans who resided here hundreds of years ago, I was awestruck in a different way than I’ve ever experienced before. Unlike Versailles or other lavish European palaces, the walls are etched with Arabic phrases and colorful tiles rather than paintings and tapestries. It’s simply breathtaking and is preserved extremely well. The marble floors have been trotted upon by millions, yet they beam a pearly white in the sun-soaked courtyards. 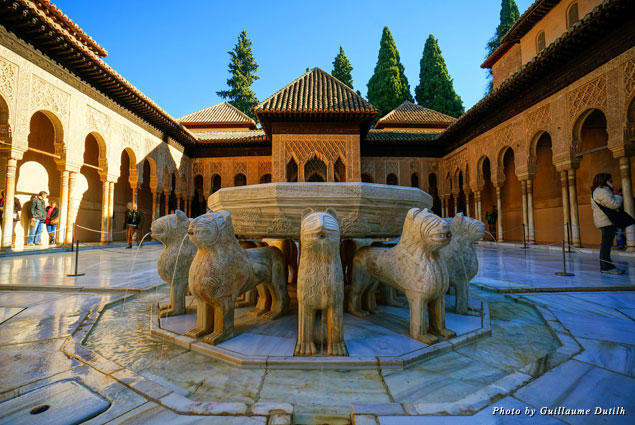 Though the arena was spectacular, I have to say I wasn’t too impressed with the amount of tourists snapping thousands of photos, using flash, and texting on their cell phones. The pure contradiction between today’s techno-crazed society and the original ladies, advisors, and sultans who used to whisper and tiptoe these very halls almost caused my head to explode! We tried our best to enjoy the experience more with our eyes and ears than our devices, as they have been enjoyed for 700 years, taking only a few photos away with us: 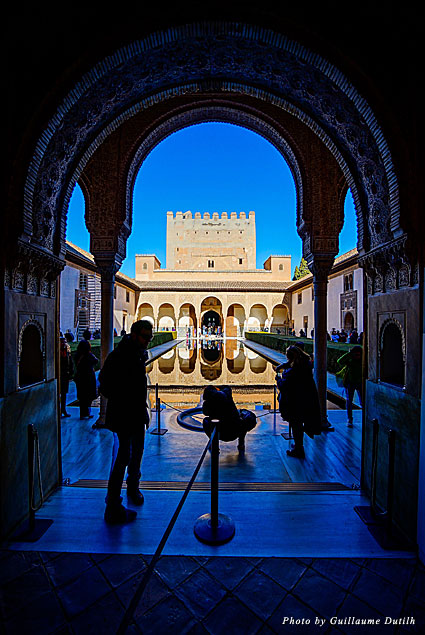 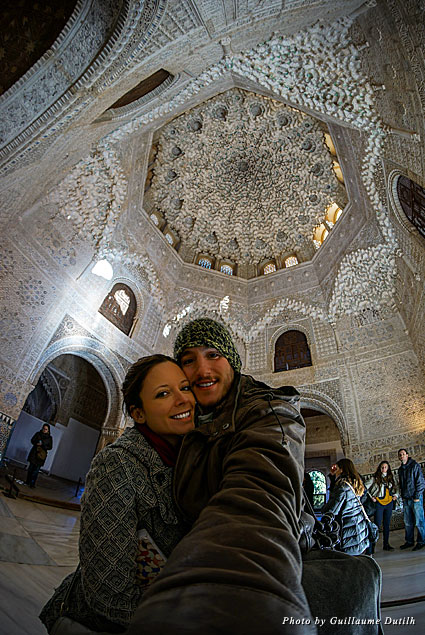 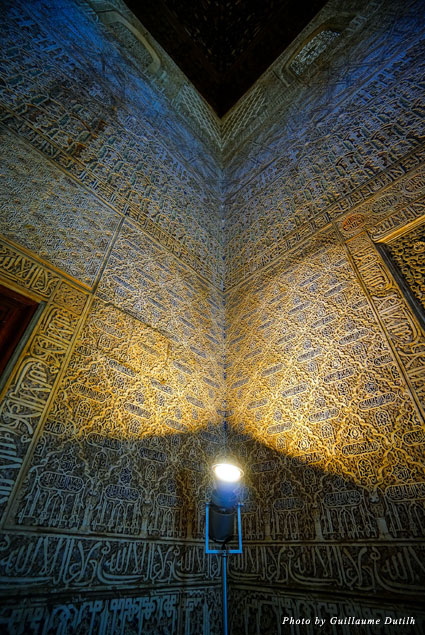 Bring a book about the Nasrid palaces and read as you walk through. You will learn about the murder and betrayal that took place and how legend says the fountains are stained red from blood. Or about the mistresses and queens, who would soak naked in underground baths while a lucky few watched and guarded from a high stone chair. There’s no denying these walls encapsulated a web of complex drama and bloodshed. 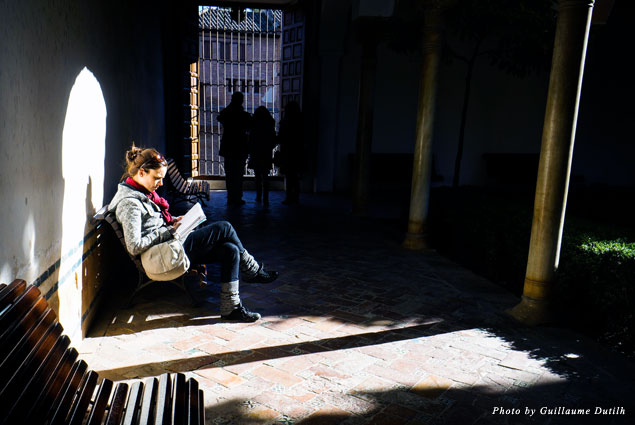 Another less fantastical palace (well, when you compare) also resides on the grounds of the Alhambra. This one belonged to Charles V, who erected a more Christian-influenced residence. The center patio reminded me of Roman structures built for gladiator fights. Though beautiful and enormous, Charles’ palace is not in harmony with its surroundings and therefore was our least favorite structure at the Alhambra. Did he have bad taste? Probably not, but this does make me rethink my modern dining table. Perhaps I should have kept the one my grandmother gave me after all. Will people laugh at my furniture choice in the future? 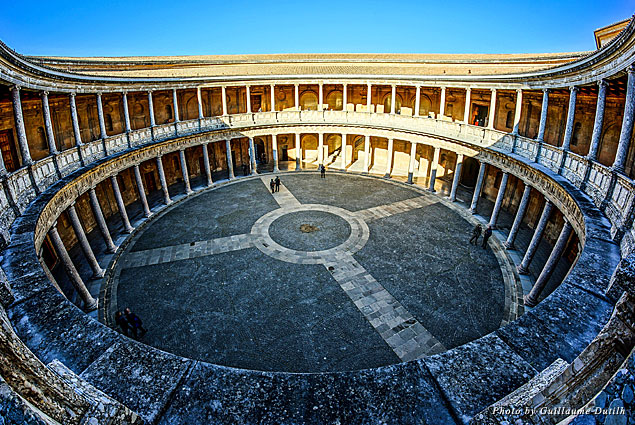 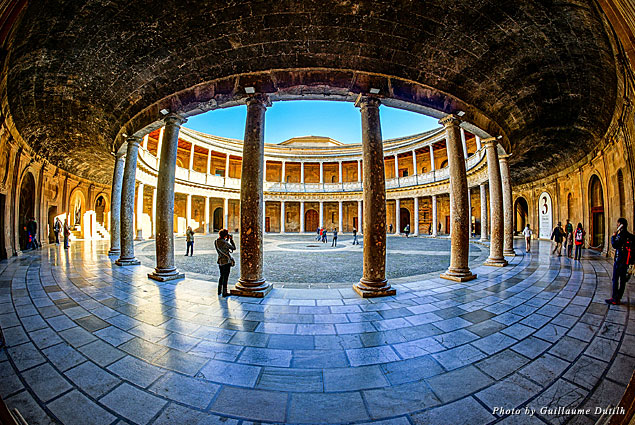 It was now time to leave the Alhambra and visit the city of Granada, a hip, young cocktail of Northern African and Spanish influence. It’s elusive with its hidden plazas full of rustic restaurants and bars. The streets can be tight (our cab driver had to tuck in his side mirrors to fit down a narrow alley), and the entire city is built on a hill leading up to the Alhambra. Navigation by foot can be tiresome and confusing.

Use the mass cab transit. It’s cheap, and you won’t have to worry about navigating Granada’s swirling maze of streets.

We hailed cabs easily and jumped from plaza to plaza, drinking and enjoying our free (yes, I said free) tapas. A culturally famous fact about Granada is you receive free tapas upon entering any restaurant and ordering a drink. Order two drinks? Receive two tapas! Each drink equals one free tapas. It’s an amazing, easy, and cheap way to fill your belly. I highly recommend it.

Stay away from Plaza Nueva. Although historically important, it is overcrowded with tourists on any given night and the tapas aren’t great (we received sliced hotdogs at one place). Try a smaller, less known plaza and hang with the locals.

After a long night with crazy cab rides and a plethora of tapas and wine we returned to our beloved hostel for a good night’s sleep. The next morning, we said goodbye to Granada and headed back to Seville to explore and enjoy other day trips around Andalucia. 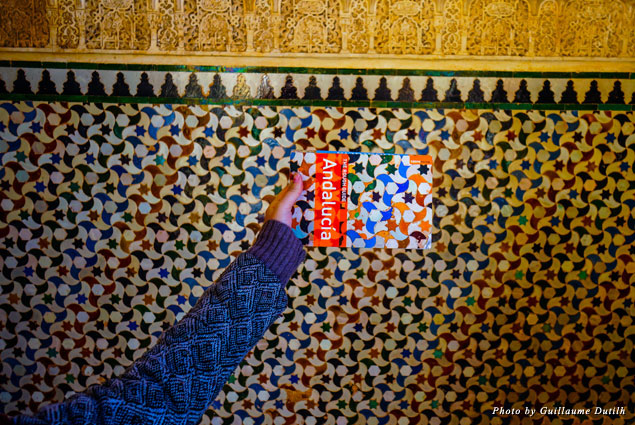 Read more from Jenna on her blog.