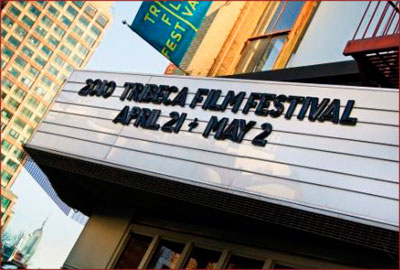 Today marks the beginning of the 9th Annual Tribeca Film Festival. Started in 2001 by Robert De Niro, Jane Rosenthal and Craig Hatkoff, to encourage the revitalization of downtown Manhattan following the attacks on the World Trade Center. The festival celebrates the city and is a great reminder of the rejuvenating effect of the arts.

At the introductory press conference held Tuesday morning, festival co-founder Jane Rosenthal opened up the remarks by emphasizing the heart of the festival is in Tribeca. “At our heart, we are a neighborhood festival” Rosenthal said, while talking about the work the organization is doing to support young and aspiring filmmakers all over the world. “We are so excited to share events and opportunities in our city in the next 12 days”.

Featuring world premieres, classics and filmmaker panel discussions, Tribeca really opens its doors to the film community—both those producing and consuming films. As Rosenthal summed up its program, “Like the city itself, you never know who you’re going to meet.”

Kicking off the festival, Shrek Forever After, the fourth installment of everyone’s favorite ogre movie, opens the festival, Wednesday evening (the movie opens nationwide May 21st). The next 12 days see a variety of films represented: documentaries, foreign film, shorts and features. Not able to make it to Manhattan these next few weeks? Tribeca has launched the Tribeca Film Festival Virtual, allowing movie buffs not in New York to attend this dynamic event, by way of their laptops. 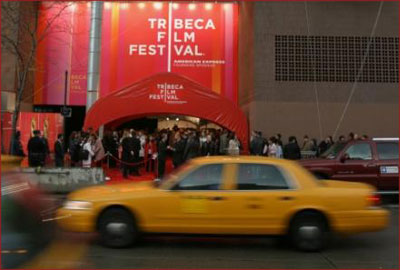 Some movies being screened the next few days: Letters to Juliet, starring Amanda Seyfried and Vanessa Redgrave; Freakonomics, made by a group of rogue filmmakers that include Alex Gibney ( director of the Oscar-winning documentary Taxi to the Dark Side) and Morgan Spurlock ( director of Supersize Me); Actor-Director Ed Burns’ new film, Nice Guy Johnny; and Please Give, Nicole Holofcener’s latest film centering on a Manhattan couple waiting out the death of their crotchety neighbor so they can take over her apartment (what’s more New York than real estate envy?).

A standout Tribeca event fun for a night out with friends and family: The Tribeca Drive-In. Jokingly referred to as more of a “sit-in” by Rosenthal (there clearly isn’t enough space on the island of Manhattan for an actual drive-in), the Drive-In is a particular favorite, as it’s an opportunity to enjoy a classic movie outdoors, right on the water on the Hudson River. Screening this weekend at the Drive-In: The Spirit of Salsa (Thursday night, April 22nd); Big (Friday night, April 23rd); The Birth of Big Air (Saturday night, April 24th).

Proving the power of the arts to empower and rebuild a community, the Tribeca Film Festival has only grown in the past nine years. Since 2001, the festival has seen its film submissions to be previewed grow from 1300 submissions to over 5,000 this year. The festival has attracted more than 2.3 million people, generating an estimated $600 million in economic activity for New York City.

The lines may be long, but this is the rare event where the lines will be worth it. So, download your Tribeca Film Festival iPhone app for instant notification of all events and screening times in lower Manhattan these next few weeks, and support the city through its dedication to the arts.