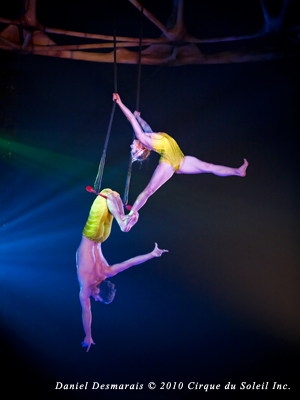 When it seems that Cirque du Soleil has topped everything ever done in the circus before, the company comes up with yet another signature production harmoniously combining acrobatics and art.

Totem, the latest collaboration between Cirque du Soleil and writer/director Robert Lepage, is coming to San Francisco with a dazzling multidisciplinary presentation on the evolutionary progress of species delivered through the language of movement, costume, music, and light.

In one after another fascinating number, like Fixed Trapeze Duo (Louis-David Simoneau and Rosalie Ducharme), Russian Bars, Unicycles and Bowls, Foot Juggling (Marina and Svetlana Tsodikova) and Roller Skates (Massimiliano Medini and Denise Garcia-Sorta) the acrobats are interacting with each other and their equipment with a mind-boggling precision and grace, amply aided by the hyper-creative costumes (Kym Barrett) and makeup (Natalie J. Simard). Set and props designer Carl Fillion, lighting designer Etienne Boucher, and image content designer Pedro Pires bring the stage space to life with endless combinations of water-themed projections from an amphibian marsh to the outer space.

Totem premiered in Montreal in April 2010 and employs 51 artists from 17 countries.

Cirque du Soleil was founded by Guy Laliberte in 1984 in Quebec to celebrate the 450th anniversary of the discovery of Canada by Jacques Cartier. “The mission of Cirque du Soleil is to invoke the imagination, provoke the senses and evoke the emotions of people around the world.”