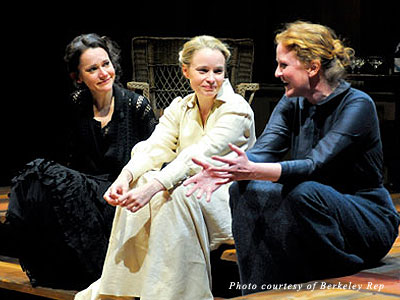 Why wouldn’t Irina, Masha, and Olga take a train to Moscow instead of daydreaming about it in their stifling provincial town? Provincial towns are horrid, there is no doubt about it, but how trapped you really are, if you are a healthy young woman with inheritance, a houseful of servants, and a freedom of living your life any way you want in a rather developed society of pre-revolutionary Russia? The most obvious answers to these questions would preclude the Russian genius Anton Pavlovich Chekhov from penning one of his most beloved plays, Three Sisters – and that would be unfortunate, wouldn’t it?

Location, location, location aside, whatever makes the three sisters suffer, makes their audiences happily compassionate, reflective and misty-eyed time and again, on numerous stages, on all continents. Berkeley Rep’s new successful production (co-produced with Yale Rep) of a century-old play was created by a concerted effort of a number of talented people. A play by Sarah Ruhl, directed by Les Waters, was based on a literal translation by Elise Thoron with Natalya Paramonova and Kristin Johnsen-Neshati. Heather Wood (Irina), Natalia Payne (Masha), and Wendy Rich Stetson (Olga) effortlessly merge with their characters, while Emily Kitchens absolutely shines in the role of Natasha, their only brother Andrei’s (a persuasive Alex Moggridge) wife, who in the play embodies all the dread of provincial callousness. The majority of the male roles in Three Sisters were written by Chekhov as supporting parts, with the exception of Masha’s husband, Kulygin – the author’s alter ego, perfectly depicted by Keith Reddin. While all other male performers are also doing a great job, their onstage presence would benefit, perhaps, from some consulting from an expert on Russian military etiquette and uniform. For example, back in the day, an army officer (necessarily of high birth, education, and self-discipline, even when drunk) wouldn’t dream of sitting casually in the presence of women with his right boot resting on his left knee. He wouldn’t try to lift a woman’s skirt with a tip of his boot, and he wouldn’t sit in the presence of a woman entering or exiting the room. Moreover, his attire would be mostly starched, ironed, and well-fitted. At least, that’s what we know from multiple chronicles of the time and from abundant historic documents. This might not be hugely important for the new version of the classic play, but those sisters were so attached to those men for a reason. Could that be that the men were at least in some respect extraordinary?