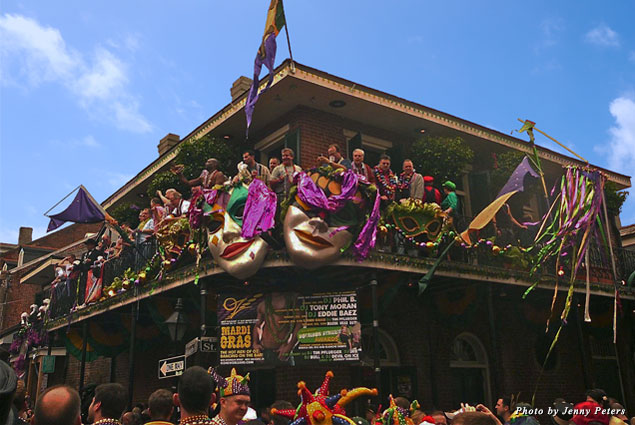 If celebrating Carnival and Mardi Gras in New Orleans has always been a dream of yours, but you’ve never been quite sure whether it truly is as much fun as it sounds or is, instead, simply a mess of drunken college students acting stupid, then this is the story for you. (It’s as much fun, trust us, and read on.) 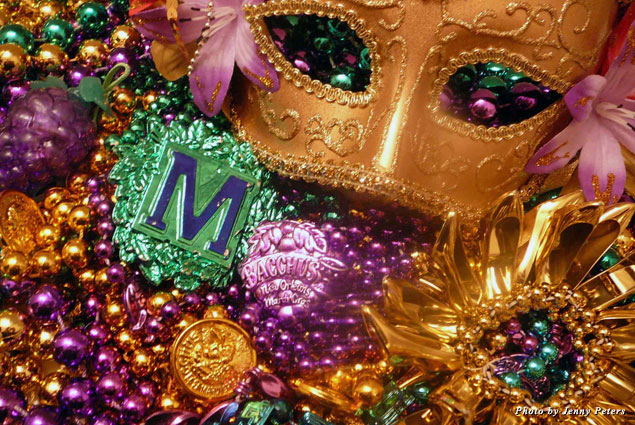 “Carnival” describes the weeks leading up to Mardi Gras Day (also known as Fat Tuesday), the day before Lent, the Catholic time of atonement, begins. And while some in New Orleans use that term, most just call all of the season of revelry “Mardi Gras.” It actually begins on Epiphany, January 6, but the big celebrations and major parades really happen in the last two weeks leading into Mardi Gras Day (which is a city-wide holiday in NOLA). 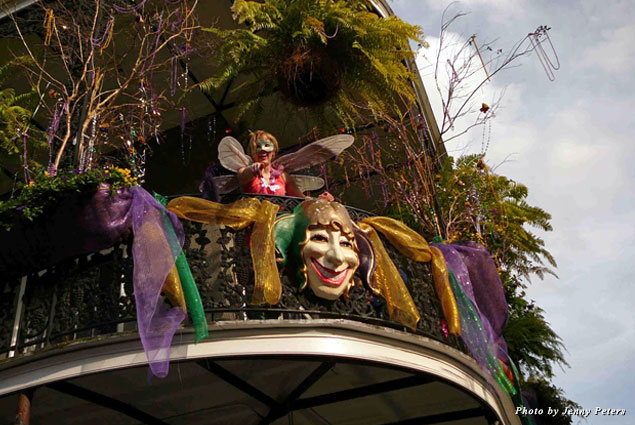 Counting back from that Tuesday (a changeable date, 40 days before Easter Sunday), which falls on March 4 in 2014, you’ll find big parades happening two weekends before in the heart of the city, going from Friday to Sunday, run by “krewes” on that weekend with names such as Cleopatra, Sparta, and Ponchartrain. Then, after two quiet days, the real onslaught begins. 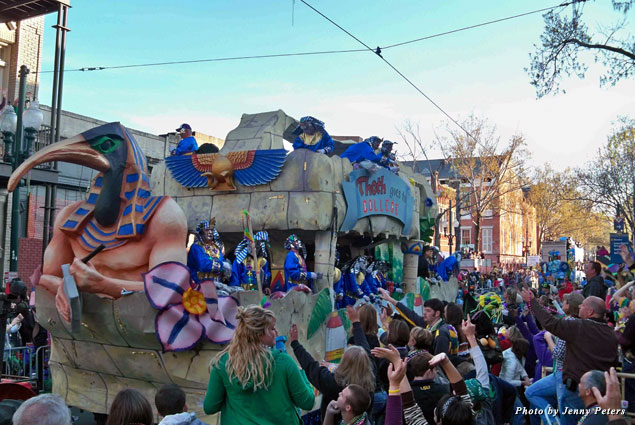 From the Wednesday evening before Fat Tuesday, it’s time for the super krewes to roll, as the celebration really gets going and doesn’t stop until midnight on Tuesday. Don’t miss Muses, the all-female krewe with the best throws ever, on Thursday night, and make sure to see Bacchus, Endymion, Thoth, Orpheus, Zulu, and Rex. Oh heck, just see them all! 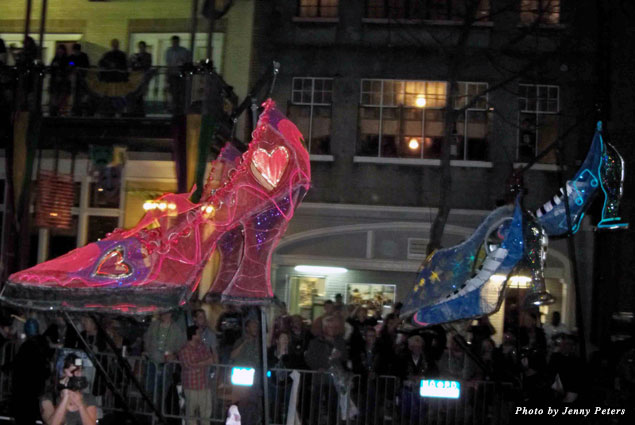 Generally, the parade routes begin at Napoleon Avenue at Tchoupitoulas Street in the neighborhood called Uptown, turn right onto St. Charles Avenue, roll through Mid-City and the Garden District, go around Lee Circle into the Central Business District, turn off St. Charles onto Canal Street, double back (never actually going into the French Quarter) and head into the Warehouse District on Tchoupitoulas Street, ending at the Convention Center or the Superdome, where the krewe then celebrates into the night with a massive, music-filled black-tie ball. 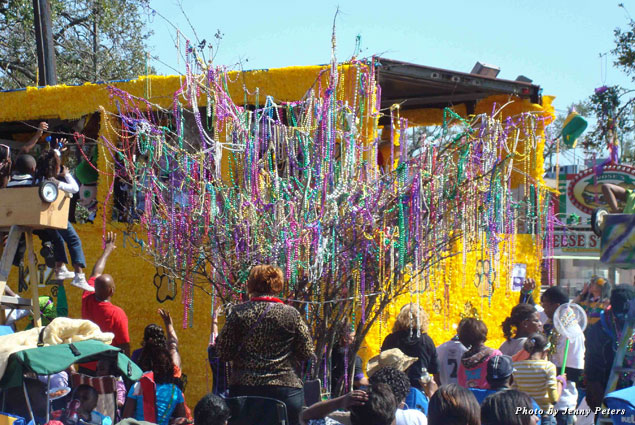 You can watch the parades anywhere along the route, but locals do tend to stake out space (often setting up in the same place for decades!), so respect the chairs, ladders, scaffolding, etc., that you see along the route. No matter what your spot, you’ll be showered with beads, doubloons, boas, cups, stuffed animals, mini-footballs, and more the minute you hit the street during a parade. 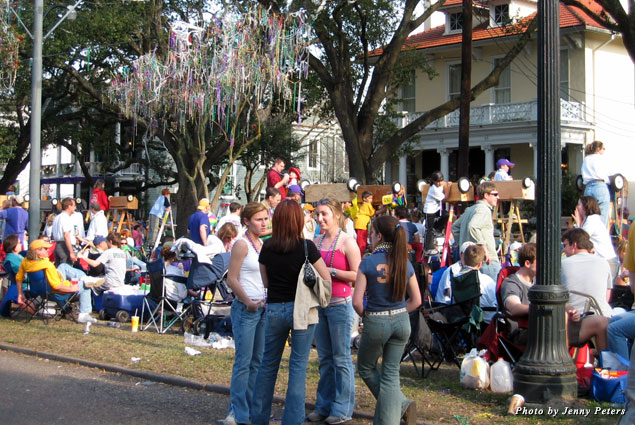 And do remember that, regardless of what myths you have heard, Mardi Gras is for families; so don’t expect to see women (or men!) flashing their private parts to get beads. That only happens on Bourbon Street, where adults-only revelers go to party (do NOT take your children to Bourbon Street). Instead, you’ll see little kids on ladders (with built-in seats added on) all along the route and tweeners and teenagers reaching out for beads while staying close to their families’ camps. And notice that camps are everywhere, on both sides of the street, for the floats are all two-sided, with riders on both sides chucking throws at the cheering crowds. Do pay attention when floats are going by; it isn’t nice to get hit hard by flying beads you don’t see coming. They can actually leave dents in your face! 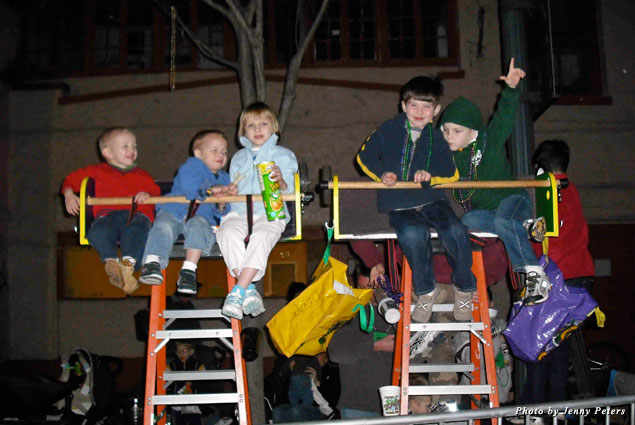 Always bring a bag to carry your loot, for those beads get very heavy when worn around your neck, especially if you’ve snagged some of the coveted “big beads.” The float riders will often throw down their empty bead bags, which come in very handy, but don’t count on catching one. And learn the lingo, too: Always say “Happy Mardi Gras!” to everyone you meet, and when you want to get thrown to, make eye contact with the rider and yell the traditional line, “Hey, mister! Throw me somethin’, mister!”

Probably the hottest room in town during Mardi Gras is at the Sheraton New Orleans Hotel on Canal Street. The hotel offers 1,100 beautifully appointed suites and rooms and sits just across the street from the French Quarter literally right on the parade route. It is such a popular spot that only hotel guests are allowed inside during the week leading into Mardi Gras Day, so expect to wear a wristband for the whole time you stay there. We recommend the Pelican Bar there as a place to start the party. Out front are the hotel’s viewing stands, so all you’ll have to do is step outside and start catching beads! 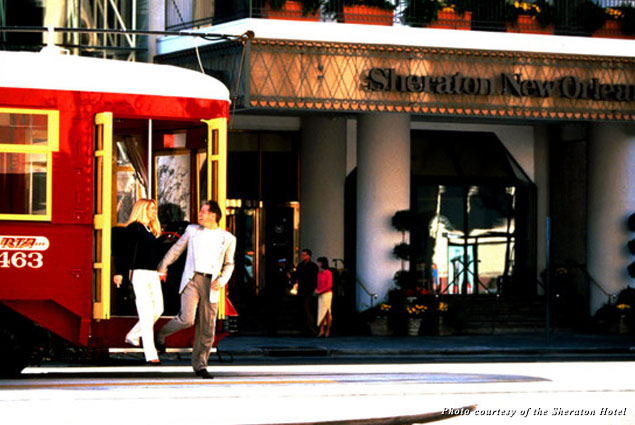 Other well-situated choices include the genteel Hotel Monteleone on Royal Street in the Quarter, where Tennessee Williams used to stay; the cool-vibed W Hotel New Orleans on Poydras or the W Hotel French Quarter on Chartres (make sure to have a delicious meal at SoBou there); or the Royal Sonesta Hotel, right on Bourbon Street, with its coveted balconies. Do not expect to sleep at all if you stay on Bourbon (or any of the streets close by), for the crowds do not go home (or quiet down) until dawn.

NOLA is known for the “go cup”—that plastic cup filled with the alcoholic libation of your choice, which can be legally carried down the street. With the party atmosphere that is especially present during Carnival/Mardi Gras, it is also known for creating killer hangovers. Solve that by making sure to eat, and eat often, in this city of fabulous food. Reserve a table at one of the top spots such as August, Herbsaint, Brigtsen’s, Mondo, Emeril’s New Orleans, Cochon, or Jacques Imo’s to have a world-class culinary experience. Or simply wander the streets and eat as the locals do, grabbing a bowl of the rib-sticking jambalaya or seafood gumbo served in just about every bar along the way.

Hit Acme Oyster House on Iberville in the Quarter for a fried shrimp po’boy or Restaurant R’evolution for its fire-roasted oysters—and make sure to find your way to Drago’s in the Riverside Hilton for the best charred oysters you have ever eaten. Be sure to have a piece of King Cake, too, as it’s a delicious cinnamon cake topped with the colors of Carnival: purple, green, and gold. You might even get the pink plastic baby Jesus cooked inside, which means very good luck.

When to Costume Up

One of the biggest delights of Mardi Gras season is getting to costume up and transform into someone else for a day. But be prepared: New Orleanians are the best (and cleverest) costume makers on the planet, so the competition is fierce. Most people don’t dress up beyond beads, boas, wigs, and hats in the days leading up to Tuesday, but everyone dresses on Mardi Gras Day. If you’re not in costume, you’re not experiencing the real Mardi Gras; it is as simple as that. Plan to do it up big with an over-the-top costume and you won’t regret it; just make sure to wear shoes you can walk in all day long.

Whatever costume you choose, get ready early and head into the French Quarter, then just start walking and looking around. Elaborate creations are everywhere—and YES, they did make the whole thing themselves! Make sure to be near Bourbon Street and St. Anne at about noon, when the annual Drag Queen Costume Contest culminates. You seriously will not believe the costumes you see there.

Bring a camera and plenty of extra batteries, for the photo opportunities all day long are endless. There’s always a big street dance party outside Lafitte’s Blacksmith Shop on Bourbon at St. Philip and also over on Frenchman Street in the Marigny, too. It’s a day to make friends with strangers you’ll never recognize again!

How to Actually Ride on a Float

If all this whets your appetite to not only visit New Orleans during Mardi Gras but to also actually spend most of a day and night riding on a float, here’s how:

Many of the oldest krewes—think Rex, Zulu, Babylon, Bacchus, Endymion—are all but impossible to join; they continue to have solely male riders, as was traditional in all Mardi Gras parades until Harry Connick, Jr., started the Krewe of Orpheus in 1993 and opened membership to both men and women. And they mean open, as “all men and women of good character are welcome to apply for membership.” Membership means the chance to ride on one of their massive floats, in their parade that rolls on Lundi Gras (Monday). You’ll have to pay a hefty membership fee to join, then pay more for the ride itself, which includes your costume, mask, and the myriad throws that pile high inside the float.

It’s worth every dime, a heady bucket-list experience that will make you grin from ear to ear and laugh the whole way, as you fling throws into the arms of waiting partiers all along the route. It takes about eight hours from start to finish, and Orpheus knows how to finish with a bang. The floats roll right into the Orpheuscapade the black-tie ball held inside the Convention Center, so make sure to save some “big” beads for the krewe awaiting your arrival. Then settle in for a night of fantastic music, as great live bands play long into the night. In 2014, Cheap Trick, Big Bad Voodoo Daddy, and the Party Crashers are the headliners, guaranteeing a packed dance floor yet again. For more information visit the website.