“The Trip” 1: Nashville to Columbus 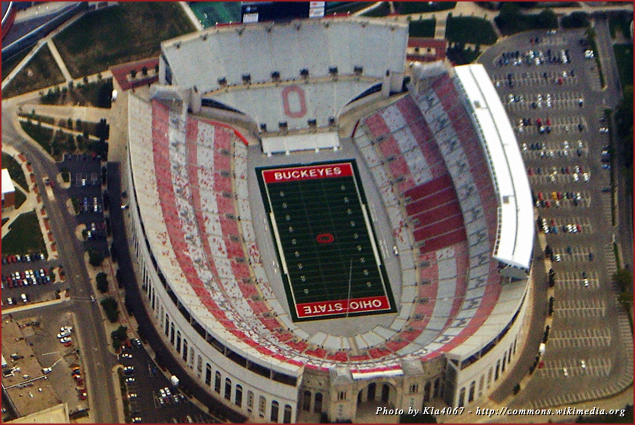 We were crunched for time and headed out early, as Saturday would begin with a six-hour drive. The goal was to make it to Columbus not only in time for the traditional pre-game festivities, but also to see my sister who was in the hospital at Ohio State. If we were pressed for time and thought we would miss kick-off then we would try to see my sister after the game or when I was back in Ohio another time. Another time would surely present itself, as we were young and there was no reason to think otherwise, so we drove and would make a game-time decision.

Originally our plan was to see Ohio State play Bowling Green in the afternoon and then race to Athens to see Ohio University play that night. Ohio University changed the start time of their game – dashing our hopes for what would become known as the “elusive double.” For now, we would settle on seeing our Buckeyes play and head back south.

We made it to Columbus in time to see my sister. We walked into the hospital at Ohio State University in full scarlet and gray regalia – when you are seeing your hometown team, you do not mess around and have one guy wear the other team’s hat as at neutral games – and the woman at the front desk – without a hint of irony – asked us who we were rooting for. I smiled at Ronnie and we chalked it up to her being another character we would meet on The Trip.

I didn’t know it, but it was going to be the last time I saw my sister (she died from a brain aneurysm a week later). There are times in your life when you wish you could hold on for just a bit longer. I hugged her and it seemed like the right amount of time, but maybe holding on one more second may have been more right. You never know. She was done holding on though. She had held on and fought with every ounce of her being for 18 years, and a week after this visit, she couldn’t hold on any longer.

What I have learned in the time since Melissa died is that time is all we have. Every moment is precious. If I had not come up with this crazy Trip or the idea to see all of these teams, I would not have seen her before she died. It is easy to sit on the couch and watch football on a Saturday. It is more fun and more rewarding, however, to get off the couch and feel the rush of energy when you are truly pursuing something worthwhile. These trips not only occupy four days during the fall, but also year-round conversations, stories, and planning. Having a passion or hobby and the pursuit thereof makes living worthwhile. College football sounds meaningless to some, but to me it brings energy and excitement.

The last time Ohio State lost to another team from Ohio was in 1921, when they lost to Oberlin College. We did not think that this game was going to break an 85-year-old streak, but there is nothing that compares to game day at Ohio Stadium. We made it over to the parking lot to meet some friends and see the line at The Varsity Club. They do more business on six home Saturdays than the rest of the year combined. As one would expect, Ohio State made efficient, quick work out of the Falcons. I always enjoy a Buckeye win no matter the opponent, so it was a good day. I like to think that Kyle had a good day too. As the crowd turned into a frenzied mass cheering on the band as they entered the stadium, I dialed Kyle’s number and held up the phone so he cold hear the noise of a Big Ten stadium. Kyle, if you are out there, I hope you got what you needed from that brief bit of white noise at the other end of the line. Keep dreaming big and keep painting yourself blue.

After the game we got in the car and hit BW3. This is an Ohio staple that has grown into a national chain. In college I lived equidistant to their two campus locations and frequented them both often. On Tuesdays they always had a 10-cent wing promotion and sometimes wings were my lunch and dinner on Tuesday nights. We were just getting started on laying the groundwork for lots of eating on future travels. After some tasty wings and flavors and smells that reminded me of more carefree days, we headed back south.

We were disappointed that the Ohio University game was moved to earlier in the day, because our one-game-per-day pace was too slow. We needed more football, but we would have to wait. Our next game was the next day in North Carolina, and we were in Ohio. (I think we should get a map and a compass before planning another adventure like this.) It got dark quickly and we were on long stretches of highway with no lights other than our own headlights. Given the desolation, we thought it would be a no-brainer to find a motel for the night. After several hours of driving and being turned away from at least five roadside hotels, I was starting to feel like Ronnie and I were a young black couple in the Jim Crow south. Every time I walked up to a hotel, I could see the sign change from “Vacancy” to “No Vacancy.”

At some point after midnight we arrived at a Holiday Inn Express near Roanoke, VA. Did we really start the day in Nashville, drive to Columbus watch some football then end up in Roanoke, VA? Yep. Had to, more BBQ and football was on tap for Sunday. Sleep sounded good.