“The Trip” 5: Morgantown to Louisville 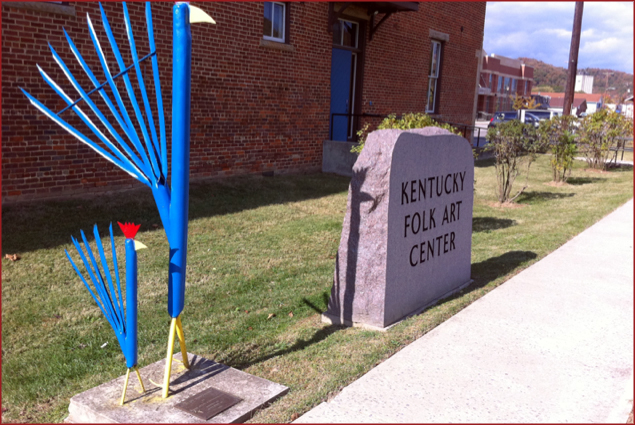 We got going early to head to Kentucky. On the way, though, we had to stop at Hillbilly Hotdogs—not because any of us were hungry for hot dogs at 8 am, but rather to prove my theory that the show Diners, Drive-ins and Dives picks restaurants that make good TV, not good food.

Unfortunately, my theory continues to be true. Hillbilly Hotdogs is very overrated. The hot dogs were nothing special, nor were the toppings. More importantly though, it disappoints from an authenticity standpoint; everything seemed as though they were trying a bit too hard to be hillbilly instead of just being hillbilly.

Being from Ohio, I know a thing or two about hillbilly, and this seemed like combination of PT Barnum and Walt Disney’s vision of Appalachia. Not only that, but considering our country’s obesity problem, seeing your average American couple sharing a meal called a “homewrecker” is not the best way to start a long day. I can honestly say, on the road of life, skip the Hillbilly Hotdogs detour.

The drive out of West Virginia and into Eastern Kentucky is a picturesque one through rolling hills. We wound our way to Morehead, KY, the home of Morehead State University and the Kentucky Folk Art Center – our next stop. Why? Good question. Ronnie has something going on with his friends from Chicago about stick chickens. It is some inexplicable inside joke; that is better left just that, unexplained. However, this was the perfect spot to pick up some stick chickens, which I later learned became wedding presents. I can only imagine the bride’s glowing face we she opened the box, “look honey, stick chickens!”

They had some cool-looking things, and my cousin collects folk art, so I picked up some small items in the gift shop for her and my kids. My daughter now has a nightlight that illuminates a small painted piece of folk art from Kentucky. I don’t think she cares, nor does she have much need for a nightlight anymore, but each time I see the glowing light in her room, I remember a great road trip.

From there it was off to Keeneland and some horse racing. Keeneland is a charming place in Kentucky horse country that has a three-week racing schedule every fall, and we happened to be driving through right in the middle. Imagine SEC-football-type passion applied to horses.

We hit a ton of traffic and started to panic about the time. Remembering that we were in this for the experience and that time didn’t matter on “the trip,” I relaxed. We made our way in, got a great parking spot and walked to the track. It was college day at Keeneland, and the place was filled with Southern debs in sundresses and future good ole boys. Beer was flowing, backs were being slapped and girls were whispering. I felt like I was at a rush party – I may have been.

Our attention turned to the horses that were being trotted out to the post. They looked strong and well-cared-for. We placed our wagers and made our way back to a vantage point right on the rail. After two races and coming up empty-handed both times, it was time to hit the road for some more football. First though, the BBQ…

It had been an entire four hours since our last real meal (snacks at the races didn’t count) so when debating a slight detour to Wholly Smokers in Georgetown, KY, we had no problem deciding it was worth it. So despite being a bit delayed by traffic, we headed north.

I posted this on Facebook after our stop there: “Wholly Smoker’s BBQ in Georgetown, KY: the meat should taste good before you even put the sauce on. It didn’t. Sauce was really good though. Sides = not good. On to the next.” Enough said.

It was time for some fried chicken and our first of two famed chicken spots for the day. We had called in our order so we could just grab it and go. When I ran inside to pick it up, I saw (to my utmost delight) a huge portrait of The Colonel at the top of the stairs. I was completely thrown off my game and forgot about my mission of running in to get the goods and getting back on the road. I ran outside and insisted that Ronnie come in and get a picture with the picture.

Ronnie has an unhealthy obsession with fried chicken (note: 2nd crazy chicken/Ronnie story of the day) and I knew this was as close as he was going to get to Colonel Sanders. It was as if a lifelong Beatles fan was meeting Paul McCartney on the street. I could feel the love Colonel Sanders was giving him from the painting as he practically whispered “thank you for your loyalty” through the canvas.

We walked back downstairs to the hostess stand to pick up our order and noticed a beautiful thing. Instead of having mints for departing guests, there was a bowl of Buckeyes with a sign saying “for good luck.” Here we were, three die-hard Buckeye fans in the middle of Kentucky being wished well by a bowl of Buckeyes. The trip was just over 36 hours old and already epic.

We took the food to the car and continued the ride in to Louisville. The chicken was good, but our expectations were higher. The biscuits on the other hand were an absurd combination of texture and taste that I will not soon forget. We had ordered as though each one of us was headed to the electric chair and this was our last meal, so there were enough biscuits for us each to enjoy a few.

At this rate, I was going to end up back at Hillbilly Hotdogs eating a “Homewrecker” and earning a nickname like Bubba. However, food intake is an essential part of “the trip” experience and I enjoyed it all.