The Sweet Spot Chocolate Shop Hits It… Right… There 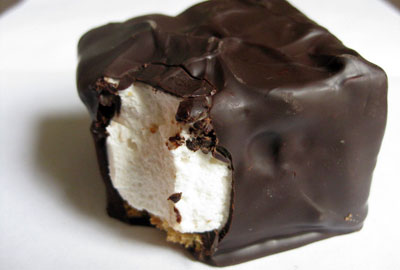 Do I have your attention? Good! Normally, when I write about food it’s “delicious” or “amazing” or “incredible”. This indulgent experience, however, was downright out-of-this-world! Now, as many women will attest, chocolate is one of the greatest (food) things on earth. It’s the culinary equivalent of heroin; mouthwatering, lip-biting, shiver-inducing goodness that revs you up and stops time, all at once. For me, it induces the ‘Gotta have it’ urgency followed by that of ‘Damn, that was good’ contentment.

Unfortunately, for North Americans unlike the French, Belgians and Italians, to name a few, chocolate carries a certain amount of stigma; it’s a guilty pleasure, conjuring up an ‘I’m so bad’ feeling. Well, since this is the case, I guess I’m one bad girl.

I recently attended an event where one of the exhibitors was the Sweet Spot Chocolate Shop. When faced with the aforementioned gastronomic drug, I often go all out – this occasion was no exception. I purchased two sweet treats; a milk chocolate peanut butter patty and a dark chocolate s’more (Sidebar: is it a coincidence that a s’more has more in its name? Very strategic, don’t you think?). Personally, I think the Sweet Spot’s name is fairly strategic as well…

Moving on. The s’more had a thick shell that responded with resistance to my teeth. I love the sound it made; a deep thud as I bit through the chocolate , a whoosh of marshmallow, and a dull crunch as I made it to the graham cracker layer. Though I had my first bite with the intention of saving half for later, the idea was quickly abandoned as I poured myself a tall glass of ice-cold milk. The dark chocolate was intense, with a thickness that coated my tongue and the top of my mouth. Then, it all becomes a blur… 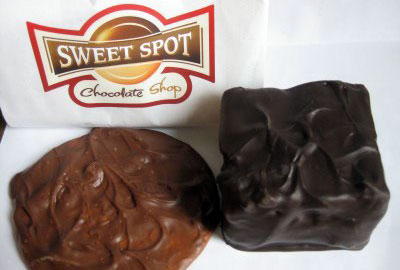 A couple of days later, I succumbed to the call of the peanut butter patty, which had taken up residence in my refrigerator. Outta sight, outta mind, right? Not particularly, in this case. I love peanut butter. When I raised it to my lips and inhaled, my heart started beating faster as I smelled the sweet aroma of this timeless marriage of flavor. The creamy entanglement of silky-smooth PB and achingly sweet milk chocolate was brief, as it quickly disappeared from my hand and slid slowly down my throat, arousing a sigh on the way down.

Now, I’m pretty particular about my chocolate—Cadbury and Nestle simply won’t do. What some women spend on shoes, I’m willing to dole out for a mere few moments of pleasure. There’s nothing quite like a good chocolate fix- unless it’s a beef tenderloin served rare… but that’s another post in itself!