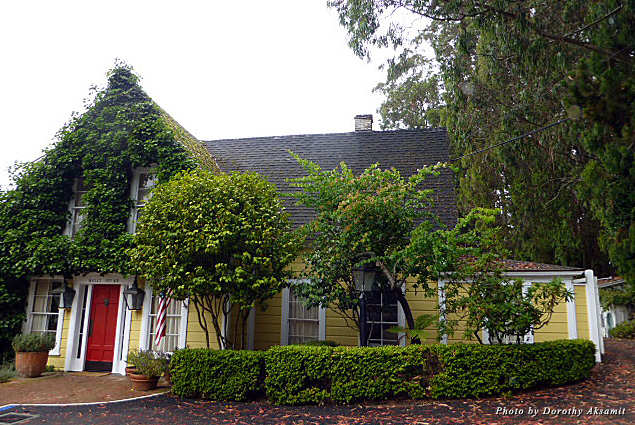 A soap opera litany of woes closed historic Heritage House Resort for five years. Now, fans of Mendocino’s former favorite destination are anxious to see the reopening of this magical setting—where many of us were lured by the romantic 1978 movie “Same Time Next Year,” in which the very married CPA, Alan Alda, had a yearly tryst with the very married housewife, Ellen Burstyn.

But for most of us, Heritage House was not a one-night stand. While Mendocino evokes pastel images of winding roads bordered by picket fences with wildflowers on one side and the peaceful Pacific’s foamy waves on the other, Heritage House presents another view. As I settled into a private cottage high on a bluff and enjoyed wine and cheese in front of the mesmerizing flames of a crackling fire as fearsome waves crashed on the rocks below, I realized it’s a transcendent mix of serenity and the forces of nature. It was hard to believe we just left San Francisco a little more than three hours ago. 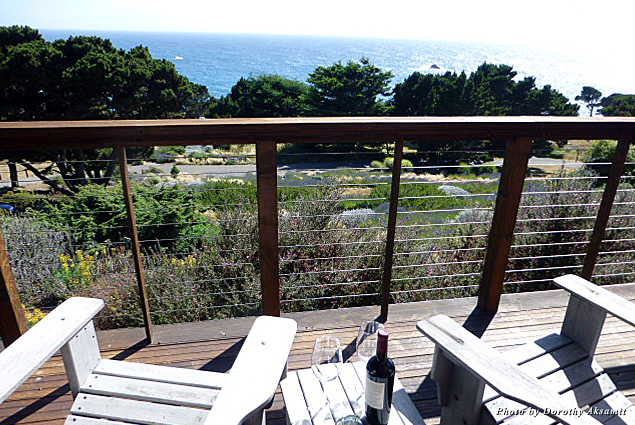 Would the setting still be the perfect space for reading, writing, meditating, or just gazing at the sea? Jackie, another history hound, and I decided to go to Heritage House midweek and do some sleuthing in this often foggy, sometimes dazzlingly brilliant land developed by lumber barons from the East Coast and taken over by tourism after the old growth redwoods were logged out.

Curving around the seascape on Highway 1, it’s easy to miss the redwood sign on the left just before you get to Van Damme State Park, but it’s there. Down the slope from the sign is the same ivy-covered cottage entrance, much as it was when Heritage House was built in 1877 for the Pullen family, just two years after the lumber mill was built at Little River. We were met in the cozy Victorian parlor entrance by Chris and quickly checked in and turned over to Bob, who led us in his golf cart to the Greenwood Building. We were staying in Contemporary Premier King rooms 9 and 10, which had a small reception room in between them. 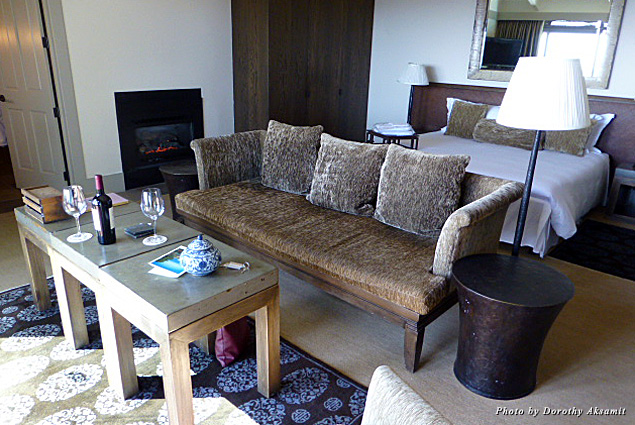 Our rooms were painted a restful gray and white, rather Zen-like, and perfect for framing the Pacific view that was ever-changing. The bed was a Dux, and the spacious bathroom with earth-colored tiles contained bongo drum-shaped sinks, a waterfall shower, a hair dryer, and French toiletries. It was perfect, as was the closet that hid a refrigerator, microwave, and coffeemaker. The balcony was inviting, but happy hour had started and we were pleased to find that from our rooms it was a level walk to the main building. However, Bob assured us he would buzz up in the golf cart if we wanted a ride to or from the dining room. 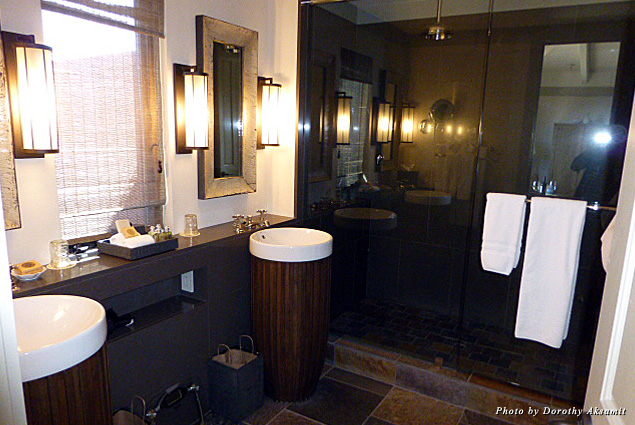 The bar was as I remembered it, with a panoramic view over the grounds and out to the ocean. It was surprisingly full on a weekday, but when we saw the half-price appetizers we understood why. The cheese plate was the most intriguing item, and the flat breads came in a close second. No wonder locals have discovered it. 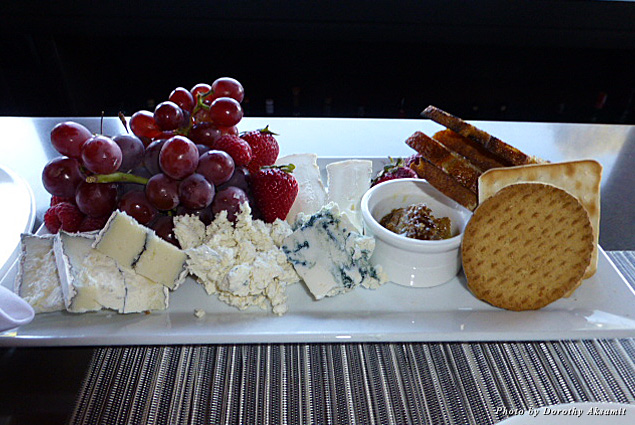 During Heritage House’s happy hour, well drinks are $5. The blackberry mojito with blackberry purée and mint was refreshing, as was the Lemon-Gin Collision with mint and lime. 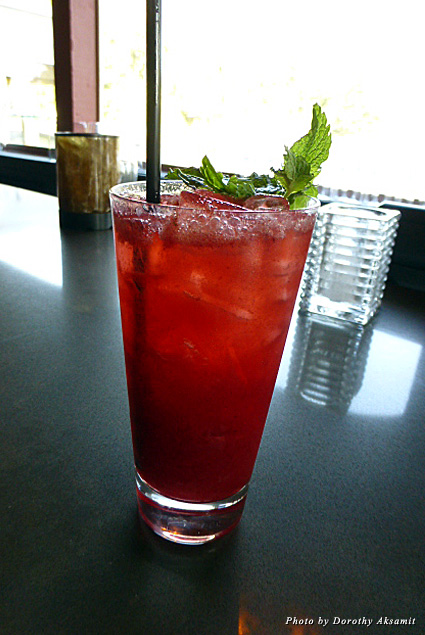 Naturally we overindulged on all counts and should have gone to our balconies to wait for the sunset, but it was one of the rare dazzlingly brilliant days—an exclamation point to the foggy days that would follow—so we walked around on a few trails, passing many cabin clusters scattered over the resort’s 37 acres.

The first owner of the property in its resort form was Lauren Dennen, who opened it in 1949. The resort slowly grew as he bought all the vacation homes on the bluff when they came up for sale, turning each room into a bedroom and adding a few extra cottages until there were 70 total. 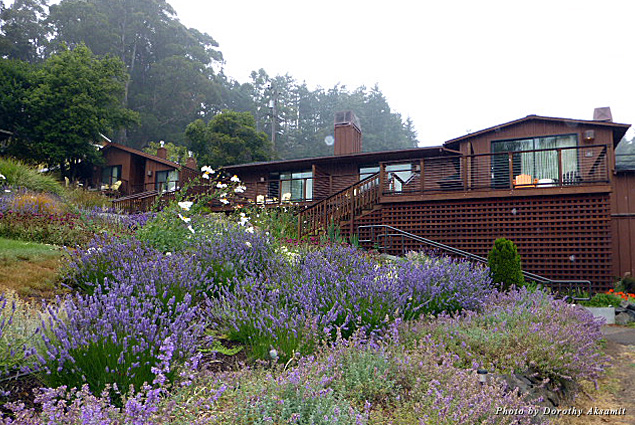 When it came time for dinner we walked through two bright lounges to the light-filled dining room with an exhibition kitchen. We sat in the solarium, which has a panoramic view of the Pacific. It turned out Brandon, our excellent bartender, was our excellent waiter, too. We were anxious to see what Parisian chef Fabrice Dubuc could add to the magic of the moment. 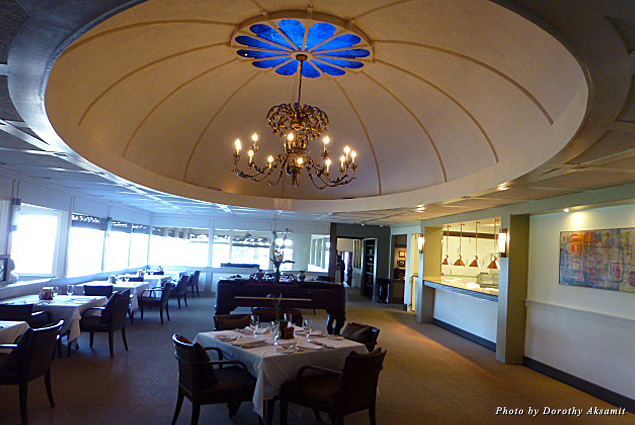 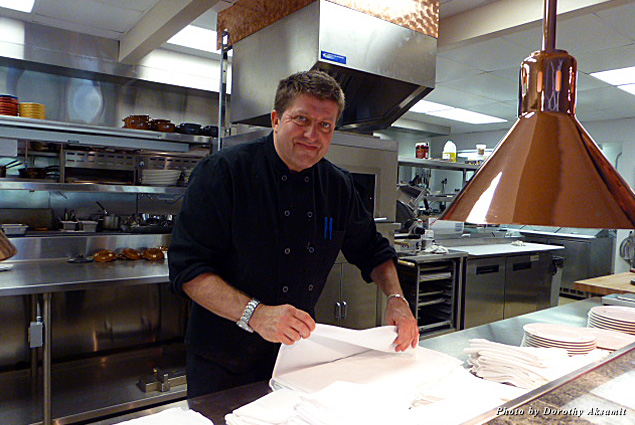 Jackie’s corn tamale pancake with guacamole, braised pork carnitas, pico de gallo, crème fraîche, and fried onions was over-the-top as a first course. Although the pancake tower looked small, it was filling. Nevertheless, Jackie still swooned over her wild mushroom risotto with white truffle oil; it was served in a tureen and would have fed two hungry lumberjacks, so more than half of it landed in her refrigerator. Her wine, from the mostly local wine list, was a Pinot Noir, Esterlina, from Anderson Valley, which she said was a perfect foil for the earthy mushrooms.

For my first course, I chose a cucumber wrap mixed green salad with local lettuces, tomatoes, and red onion vinaigrette. It was a shame to dismantle this work of art. Of course, a seafood dish was a must when staying by the sea, and the lemon penne pasta with crab, scallops, tiger shrimp, asparagus, local mushrooms, and pesto cream sauce, was bursting with flavor but very filling. My refrigerator also received a heavy box. A crisp Pinot Blanc, Girasole, from Mendocino was a bright note.

It took me a minute to realize what was different about the dining room: Everyone was talking to each other and to other tables, especially those who were reminiscing about the days of “Same Time Next Year.” The secret is there is no cellphone coverage at Heritage House (although you can still make free phone calls from your room). There is Wi-Fi in every room as well as a booster with Verizon coverage in the lobby.

We shouldn’t have dared, but Jackie had a sinful layered sundae for dessert and I had a semifreddo with a light texture that belied it’s decadent nature.

Breakfasts at Heritage House Resort were equally sumptuous. We worked our way through brioche French toast and an omelet with goat cheese, mushrooms, spinach, onions and a balsamic reduction.

In the afternoon, general manager Jim Hunter gave me a mini-tour of the resort and a glimpse of future plans, which include a wellness spa, a swimming pool, and possibly tennis courts.

The guest rooms I looked at all had the same décor but different configurations. The Deerfield complex is on the south end of the property, and Jim said that in May a wedding for 180 people had been held in the open field. On the north end of the property, the owner’s cottage with three bedrooms and a dining room is also a popular reunion or wedding party choice. My favorite cluster was in the Carousel unit, which includes five separate rooms just above the gazebo. It is the most popular choice for a wedding.

Jim pointed out all rooms have waterfall showers, 11 of them have bathtubs, and three have hot tubs. All rooms have fireplaces and two are wood burning. There are four ADA rooms. Pets (a maximum two per room) are given a welcome bag; there is a $50 per pet per stay fee.

After the tour we could have traveled 10 minutes from Heritage House to the nostalgic New England village of Mendocino, with its museums, art galleries, and destination restaurants, or gone to Navarro Beach and kayaked through sea caves, or visited the Pygmy Forest out on Old Airport Road, but we didn’t. We decided instead to order a cheese plate and wine, watch the sunset, and then tune in to the still charming “Same Time Next Year,” which plays continuously on channel 1.

Heritage House Resort, before the renovation, had the hushed ambience of a posh private club, but now its more casual vibe suggests a “Cheers” meeting place. All it needs to really rock for future “Same Time Next Year” fans is a little live music in the lounge.