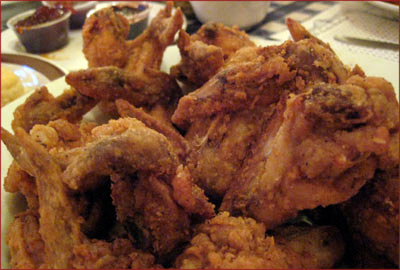 You may recall that I possess a drooling obsession with ladylike enjoyment of fried chicken. So imagine my beast-like frenzy pleasure at getting to visit Nashville, TN”s southern famous food fortress, Loveless Cafe and Motel. Loveless has served up staples like chicken, ham and biscuits for over 50 years and has seduced countless palates. Loveless? After my “family style” all-you-can-eat chowdown, I may be in love…

Let’s start with the digs. The building itself, plus various renovations, is from the early 1900s, and its countrified charm has stuck to its walls like ribs in the gut. With a brief stint as a motel during the 70s/80s, former guest rooms now house small shops including a country market and an art gallery.

You may have seen Loveless on “Throwdown with Bobby Flay,” in which the chef takes on “Biscuit Lady” Carol Fay Ellison. Sadly, Carol recently passed away, but I have no doubt her fierce spirit lives on in her sublime Southern biscuits. With a crisp outer shell and melty inside, just the right amount of salt in the dough and a magic secret ingredient (“Lard,” a waitress told us), I can’t imagine how Flay bested Fay… they were so good. 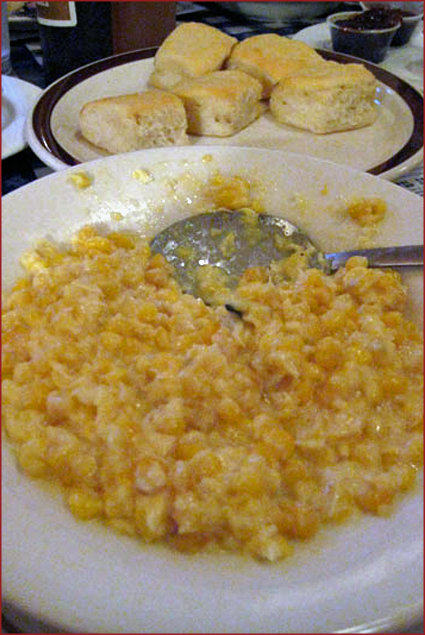 While we’re looking at the above pic, let’s talk sides. I wanted to adore the mac and cheese (another one of my faves), but Loveless’s mac lacked density and depth. I’d say skip the runny, bland cheese sauce and opt in for some creamed corn (pictured above). It coats the tongue in a-maize-ing awesomeness. Also good are the hush puppies, which offer a satisfying fry on the outside with delicate, sweet breadiness within.

And speaking of fry, hello fried chicken! The batter on these babes is thin, but it sure is tasty. Loveless’ fried chicken maintains a salty crunch on the outside and a moist tenderness on the inside that makes it a great plate. FYI: tables come topped with a range of condiments including ketchup, hot sauce, honey and sorghum molasses. The ultimate chicken-lickin’ good combo? Hot sauce and honey!

For dessert, I enjoyed the Made from Scratch Real Banana Pudding. After the hefty meal preceding it, the pudding was surprisingly light and fluffy. I, however, after eating all of that, was not.