The Barrel Room in Oakland, California: Focus on Wine Education 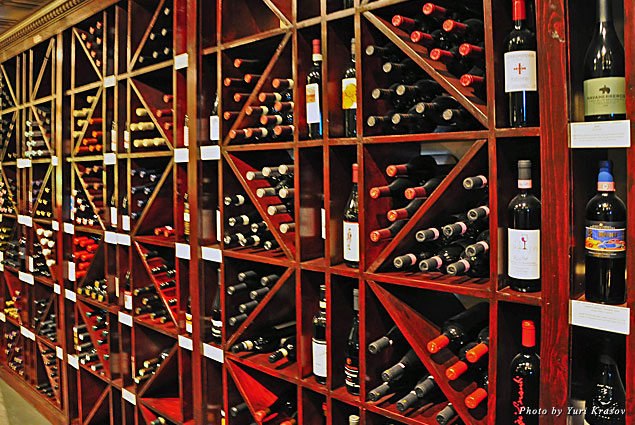 The Barrel Room, a popular San Francisco wine bar and club for connoisseurs, now has an offshoot in Oakland, where international regional cuisine complements the featured wines.

Two young women with professional sommelier certification, Sarah Trubnick and Carolyn Johnson, who own both Barrel Rooms, see their mission in introducing to the dining public hard-to-find and small-production wines and their indelible connection to all the other crops of the soil. 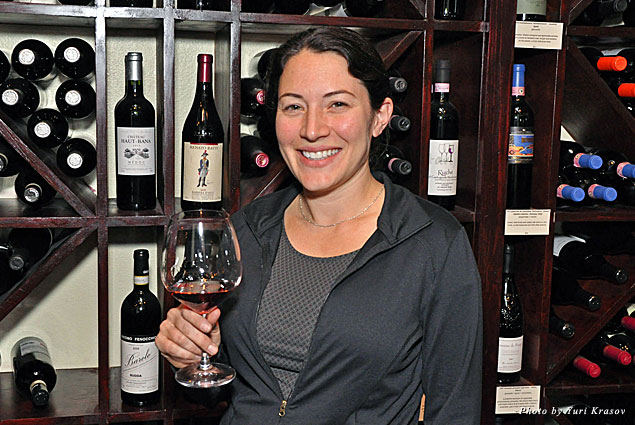 “Carolyn and I focus on education,” said Trubnick, explaining their desire to pursue little-known labels from rarely advertised winegrowers. Even those bottles that come from well-established wine-producing regions tend to be from remote or understated areas, making for a kind of treasure hunt with some very satisfactory finds. According to Trubnick, many regulars and wine club members quickly establish their favorites among the vintages they’d never heard of before their first visit to the Barrel Room in San Francisco, where wine flights from various geographical regions change every six weeks.

At the Oakland facility, the change will occur every two months, “to give the chef some time to adjust,” said Trubnick. 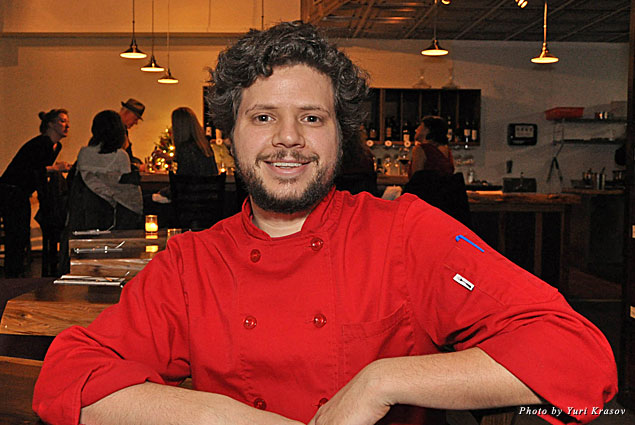 The entire menu changes with the featured wine region so chef Sam Paulding, who made his name at Paulding & Company in Emeryville and Oliveto Restaurant & Cafe in Oakland, needs to come up with seasonal and suitable food pairings that would “rotate around wine, not the other way around” at the owners’ request.

“We see this as our chance to give people the profile of the country,” said Trubnick, referring to the lineup of planned countries to be featured this year, among them France, Germany, Austria, Italy, and the United States (there are surprisingly good wines from the Midwest and other unexpected locales). 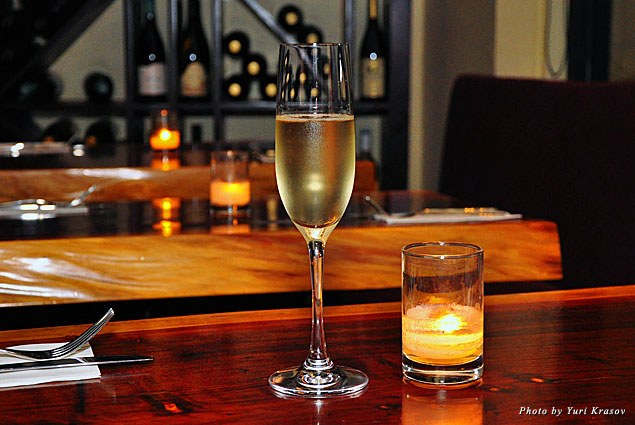 With the underlying approach “something for everyone, from the wine novice to die-hard oenophiles” and almost 50 wines available by the glass, starting a dinner at the Barrel Room with a glass of Andre Robert Grand Cru “Cuvee de Reserve” Brut Chardonnay Champagne is an obvious choice.

And since the owners feel that “to showcase the wine you need good hearty country cuisine—rustic and simple but delicious,” a starter of classic Brandade of true cod, cream, and potato with toasts—a traditional Basque dish made with house-salted cod—definitely fits the bill. Fruity, light, and crisp 2012 Valle Isarco Kerner Alto Adige, Italy provides a refreshing contrast, while 2007 Rijckaert “Grand Elevage” Vieilles Vignes Savagnin Arbois, Jura, heavy and oxidized, is rich enough to compliment the cod. 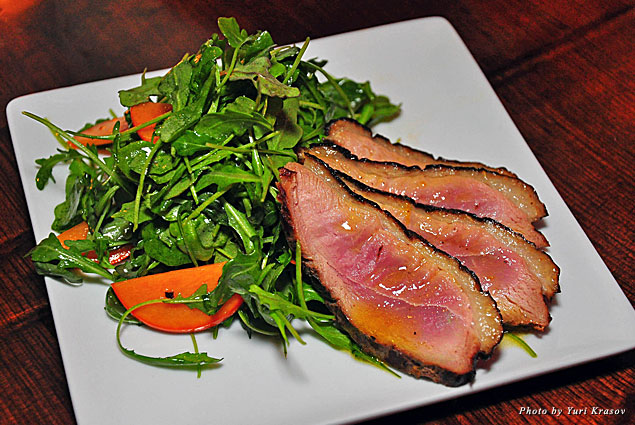 Tea-smoked duck breast with arugula and persimmons, smoked in-house and seasoned with orange zest, has a distinct and pleasant tea flavor and is rich and succulent, especially paired with two different choices: a traditional 2011 Domaine Combier Syrah Crozes-Hermatage, Rhone and, for the more adventurous, a 2011 Trosset “L’Expression d’un Terroir” Mondeuse Arbin, Savoie. 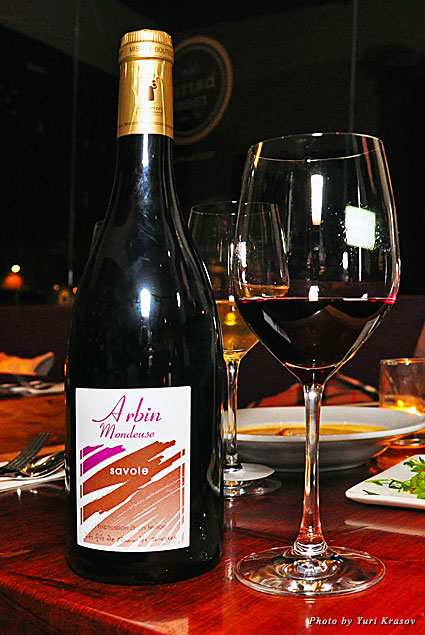 Wonderfully tasty crab bisque, made with brandy, cream, leeks, and paprika, and traditionally paired with white Burgundy wine, finds its match in a classic with a touch of butter 2011 Guerin “La Roche” Pouilly-Fuisse Chardonnay Burgundy and its counterpart in a complex 2011 La Sorga “Cuvee du Bu” Terret Bourret Languedoc-Roussillon with candid orange zest and pickle aroma. 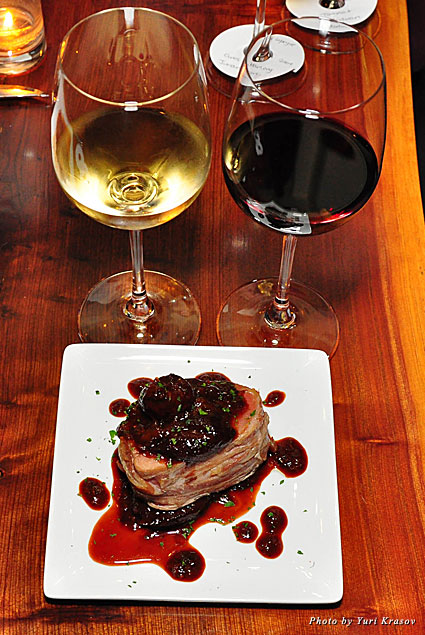 An authentic Loire Valley dish, porc aux pruneaux—pork tenderloin wrapped in pancetta and garnished with preserved prunes in port reduction sauce—is so versatile and pleasing on all occasions and pairs nicely in the establishment-honored contrasting/complementing mode with either a light crisp white with lots of character, such as 2011 Francois Pinon “Silex Noir” Chenin Blanc Vouvray, Loire Valley, or with a bold full-bodied 2011 Blue Rock “Baby Blue” Cabernet Sauvignon Alexander Valley, California.

An amazing chicken dish with a distinct kick, poulet basquase, smothered with piperade sauce, is also masterfully paired with either a white 2009 Cazin “Le Petit Chambord” Romorantin Cour-Cheverny, Loir Valley with lots and texture and a mouth feel of peach skin, or with the red 2010 Domaine Berthoumieu “Cuvee Charles de Batz” Tannat Madiran, Southwest. It’s strong and heavy, but it’s also the kind those real Basques would drink with their peppery chicken.

For dessert, a classic French crème brûlée, silky and smooth under its crackling golden surface, is complimented by Chateau Haut-Mayne Semillion and Sauvignon Blanc Sauternes France. 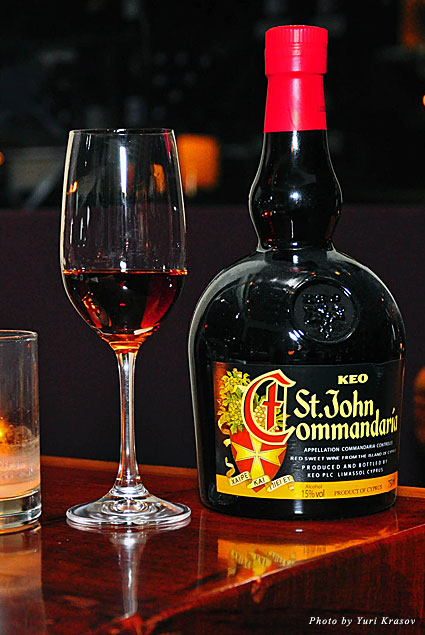 A generous slice of addictive pistachio torte with sabayon and apple relish is matched with a noble St. John Commandaria Xynisteri and Mavro Cyprus of deep velvety color and accretive sweetness.

Relatively small but well-appointed, the dining room is decorated in rustic modern style, with redwood-topped tables and bar, bench seating, a pressed tin ceiling, pendant lights over the bar, and a polished concrete floor. 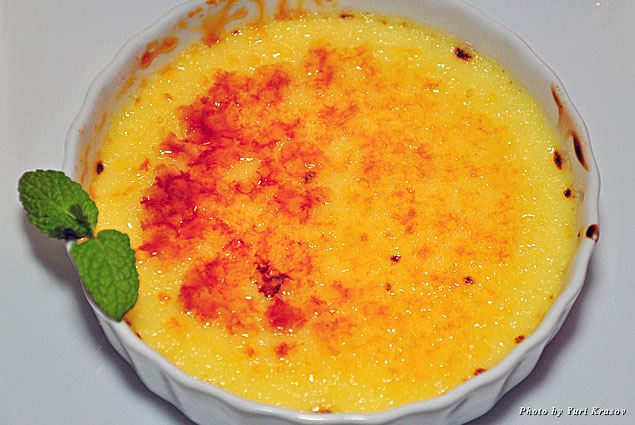 Esteban Brunello, whose experience working as the wine director at Oliveto and as a manager and the sommelier at SPQR in San Francisco, adds to the scope of the Barrel Room experience and is always happy to help choose between more than 200 bottles of wine organized by profiles such as light and crisp, aromatic, bold, plush, spicy, or earthy. A selection of international beers and local craft brews is also available at this wine-centric restaurant.