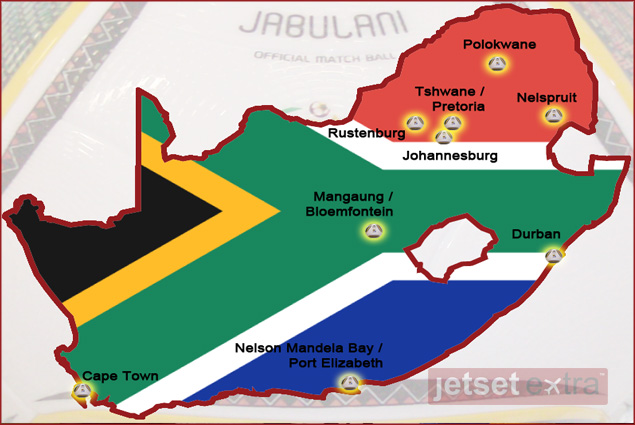 Jetsetters abound, if you’re a diehard football fan, this week is about you. We’re talking about the heart-pounding, head-butting skin-to-skin contact that the world calls football. And this month is all about 32 teams on a mission to becoming the best in the world. That’s right, we’re talking about The 2010 FIFA World Cup.

Here in the US, ESPN has been revving us up with their World Cup ad featuring rock legend Bono delivering an inspiration message over the U2 song “Magnificent.” We found it so moving that we just had to share it with all our jetsetters. Let us know what you think by leaving a comment. Check out the video here:

The FIFA World Cup is the biggest sporting event in the world. Drawing 26.29 billion viewers in 2006 alone, it’s bigger than Tour de France, Wimbledon, The World Series, The Olympics, The Super Bowl, or the ICC Cricket World Cup. 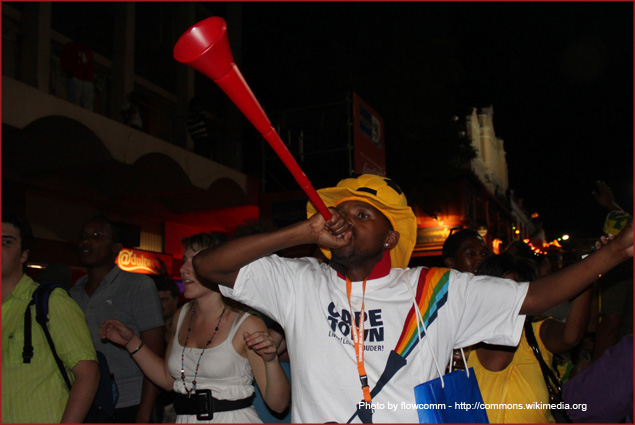 The 19th World Cup begins this Friday June 11th in South Africa. The matches will take place in 10 stadiums, in 9 cities, with the Final being played within “Soccer City”, Johannesburg on July 11th.

But, what makes this game so popular? For those of you who don’t know much about it, we’ve contacted Mike Chesney, also known as “Kiwi” our New Zealand football fan, to answer a few of our questions on the World Cup. Check out his interview here:

Ok, Mike…so how did we get down to the 32? How does that happen?

Why did FIFA change the team count from 24 to 32? Is this just to get more countries involved?

I don’t know exactly. I imagine it was to keep pace with the globalization of the game. 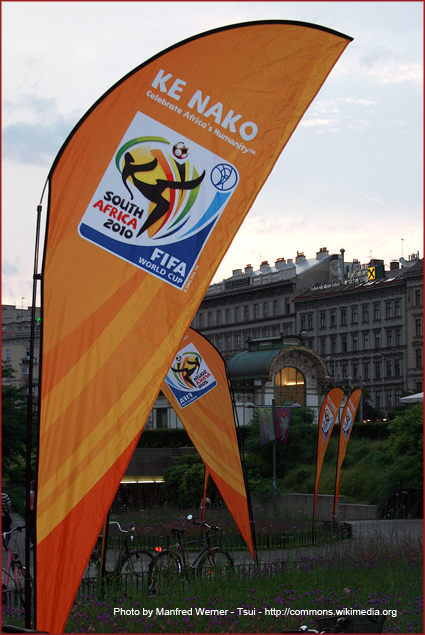 Some are regional, but none are set by rivalries. The top 7 teams in the October 2009 world rankings, plus South Africa were seeded and headed their respective pools. The remaining teams were put into pots. Pot 2 was composed of teams from Asia, Oceania, and North and Central America and the Caribbean. Pot 3 included teams from Africa and South America. Pot 4 had the remaining European teams. Pools were drawn, some with geographical criteria, so teams from smaller conferences did not end up in the same pool.

Ok, Now we have our 32 in our 8 groups. Does everyone play each team in their group once? I’m guessing that points are awarded for wins losses and ties, yes? What are the points for each?

4 teams per group, 3 games each; each team plays each other team in their group; Winner receives 3 points, 1 point for a draw and no points for a loss.

Then once all of the group matches are over, and each team has been ranked, the top 2 from each group move forward to the Round of 16. Can there be a tie in points for the group matches? How is that worked out, what’s the Tie Breaker to determine the team that advances?

To decide the group ranking at the end of the group games FIFA uses the following criteria: 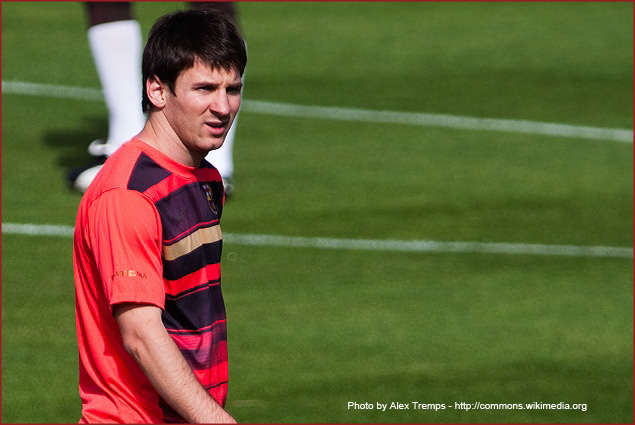 We then head into the Round of 16, How does this all work out? I’m guessing that it’s lose and you are out from this point on?

Single elimination from Round of 16 onward. If a match is level (tied) at the end of 90 minutes, extra time, of two periods (15 minutes each) will be played. If the score is still level after extra time, the match will be decided on penalty kicks.

So they go with “penalty kicks” or “shootouts” at the end of a tied match? How do those work to break a tie?

Yes, after extra time, best of 5 penalties per team, then sudden death shoot out.

Are the Groups split at this point? By that I mean does Group A only play against C, E and G? or could Team USA (Group C) play The All Whites (Group F) in the Round of 16?

Ok, onto a bit about the game, not so much about how it’s played, but there are a few things that I’m curious about. I get the deal with the number 10:

Is that player called the “Striker”? What are the other terms for the players?

You have a Goalkeeper or Goalee; a Sweeper; some Backs, Midfielders, a Striker, 2 Wingers, depends on the pattern you are playing. 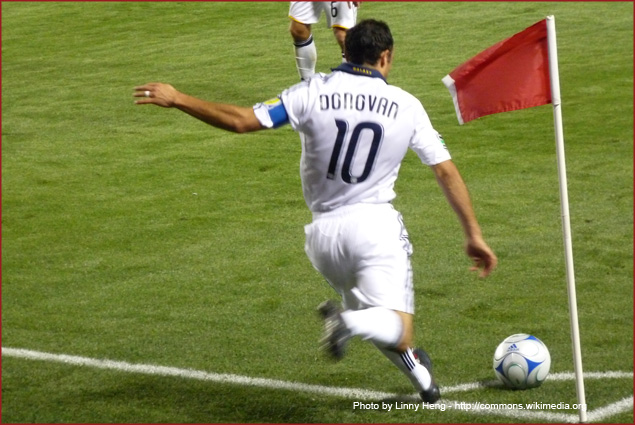 What numbers are reserved for what positions? Are certain numbers reserved for other players that specialize in certain skills, similar to 10?

By the way, what does FIFA stand for?

What’s your opinion of this World Cup compared with some from the past? Will this be more competitive or less?

This will be very competitive from the round of 16 onward. Once the lower tier teams are eliminated, I’m expecting close, tight games.

With Mexico playing vs. South Africa in the first match of The Cup, what do you expect? Will this match set the tempo for the opening weekend?

This is a tough one; SA will be “UP”, Nelson Mandela will be there to inspire them. Mexico are skillful, but smallish in size; I watched them play New Zealand in Pasadena earlier this year, they created lots of chances but struggled to score. I’m expecting a comfortable win for the Mexicans. 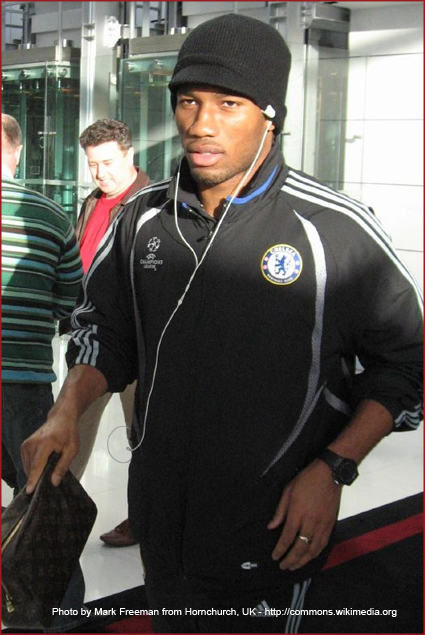 Upsets are always going to happen, but what teams do you think should dominate?

The usual suspects will come through, Brazil, Spain, Germany, England, the Netherlands….

Which teams do you think are just “glad to be nominated” and probably won’t cause too much trouble for the top teams?

New Zealand, North Korea & Honduras are currently 1000:1 with Ladbrokes, I don’t think any of these team will bother the opposition, the score sheet or the bookies.

Does USA have chance to reach higher than in 2002 when they reached the Quarterfinals? Will Donovan lead well for the US team?

No, I don’t see the US coming out of the group stages, England should dominate Group C; the other team will be scrapping for the number 2 spot, resulting in a date with the Germans in the round of 16, yikes.

Realistically, what are your expectations for your All Whites from New Zealand? This is their second appearance in The World Cup, yes?

The All White didn’t disgrace us in 1982, losing to Brazil 4 – 0; Russia 3 – 0 & Scotland 5 – 2; This time around the overall standard is higher and it is harder for teams to surprise. I am not expecting any wins, but I hope the boys play well and fair. 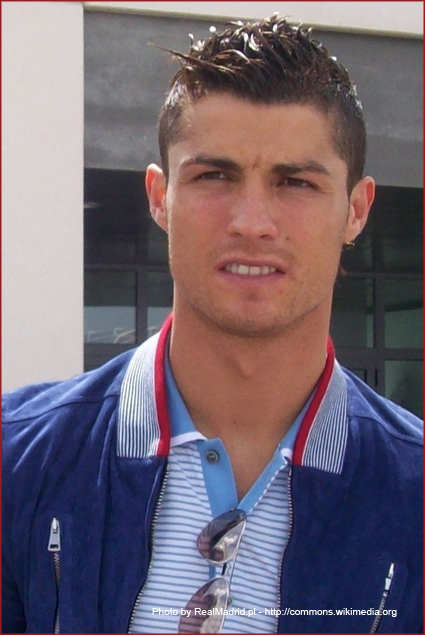 Will Mexico be a surprise?

They may surprise, and get eliminate early, if South Africa is hot, France should win that group and Mexico my hit Argentina in the Round of 16.

Is Brazil still the favorite to win?

Spain is the favorite, but Brazil is right there.

I’ll be watching as many matches as I can, but, at least in the Group Matches, which ones are a must watch?

EA Sports ran their video game in simulation mode and came up with Spain over Brazil 3 – 1. Do you agree?

In my unofficial pool I have this exact score, Spain are really good, you can’t count out Brazil; I would love to see the Dutch win, they came so close in 1974….

What are your feelings on Diego Armando Maradona coming back to the World Cup stage as a coach. Will he inspire this new Argentina squad especially Messi?

In my opinion Maradona doesn’t have the credentials to be on the world stage as a coach; He has some nasty personal demons to deal with, hopefully the focus will be on his team and not him. 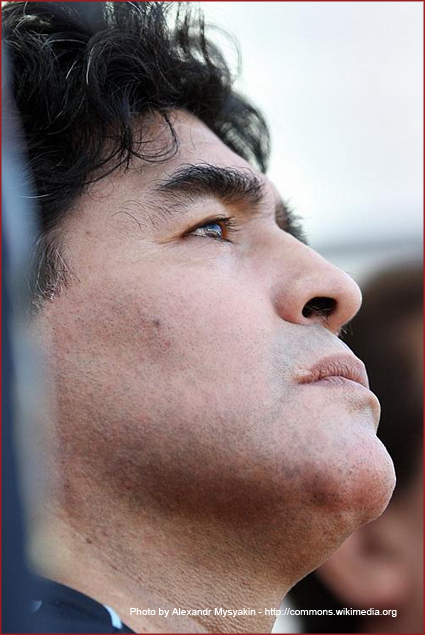 What do you think of Messi, will he outshine Maradona’s “Hand of God” and make everyone forget about Mexico ’86?

“Hand of God” is folk law; nothing will change that. I don’t see Argentina as strong as in the past, even with Messi.

Will Cristiano Ronaldo continue to “showboat” with tricks or will he concentrate more on making plays?

Ronaldo is outstanding and I think he can do both. Portugal are lethal and should go far.

Will Drogba play for Ivory Coast with a broken arm? Do you think he the best “striker” of all time?

Drogba could play in the later games, they desperately need him to qualify. As for the best striker of all time, I don’t see him in the top 100 all time, I see him as “over-paid, over-emotional and over-he-goes-again….

So, you are the Coach…who would you choose,

Pele, Pele & Pele. He is the only one in this class.

Who is/was your favorite Footballer?

Kiwi, my friend, I appreciate your time and your insight. Thanks for sitting down with Jetset Extra.

For those of you who can’t wait until Friday, or you just want to learn more about the game, here are some sites that we think you’ll dig.

The official FIFA World Cup site, with team breakdowns, World Cup History, news update and anything else you might need to find out about the game. They offer a downloadable PDF of the schedule here (all times are local for South Africa.)

Here in the States, ESPN offers up an online schedule with Eastern Times. If you are not able to see the games on your television here you can watch most of them on ESPN3, streaming live in HD. 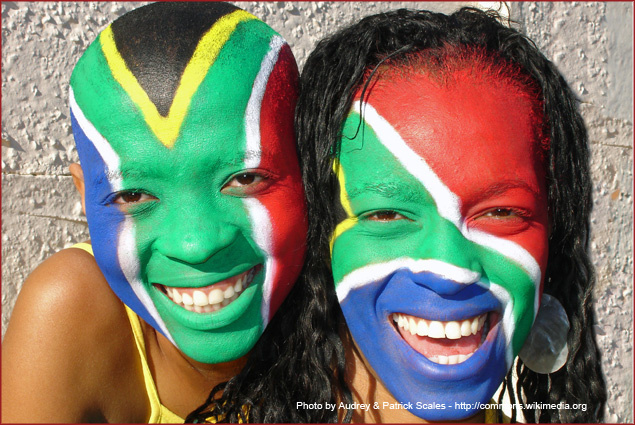 If you go to ESPN’s FIFA World Cup 2010 website, there is also a link to enter your picks and play against others from around the world. Click the link titled “Fantasy.”

Who will win? Well if you believe EA Sports, one of the largest video game makers in the world, then Spain defeats Brazil 3 -1. This is according to the simulation they ran on 2010 FIFA World Cup South Africa. Here are the rest of the simulation results.

We also found a World Cup blog that has done an excellent job with two different downloadable PDF’s of “Wall Charts” as both a “Classic” and a “Bracket.” Nice work there, Daryl!

Lastly, ESPN has published a quick one minute video about each and every team in The World Cup. These are narrated by actor/model Djimon Hounsou. We have set these up in a playlist for you in order of the nations’ FIFA World Cup areas:

Tune in on Friday June 11th at 8:00 am ET for the Opening Ceremony followed by the first game at 9:30 am ET with host Nation South Africa playing Mexico in “Soccer City” (must have been named by an American). Team USA starts off against England on Saturday June 12th at 2:30pm ET.