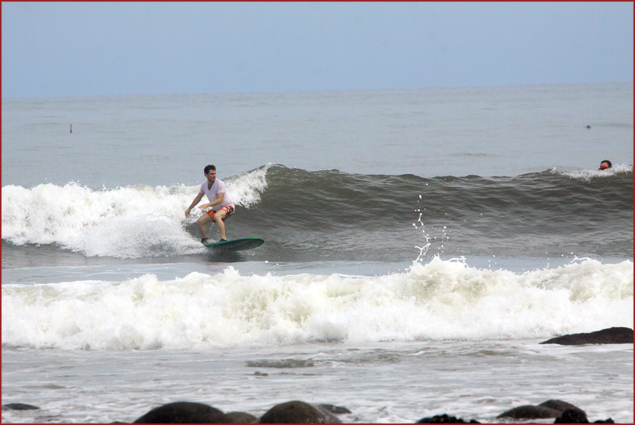 Surfing in different parts of the world is one of my favorite things to do. Though the culture is somewhat universal with the tattoos and the laid back attitude, there is always something unique about every break. Nothing is truer than surfing in the remote town of Medewi in Bali. Two and a half hours from the airport, it is known for the longest left in the region.

Our first morning in Indonesia we were driven five stunning minutes away from our little eco-resort to this remote break. Arriving in a van that screamed “the tourists are here,” we were besieged by board hawkers, surf lessons, and photographers trying to sign us up for a shoot. Young punk-rock Balinese boys smoked cloves and charmed us into answering personal questions about our age and marital status. Even though it was early morning, I couldn’t resist sharing a Djarum with them.

Before we could even make it to the cliff’s edge, or were even sure the waves were fit to ride, we were whisked away through pastures of grazing cows and fitted for our boards.

We negotiated a price that we thought was a bit too much, but we agreed to it seeing that they were really nice boards. Never mind that the guy tried to claim when I got out of the water that I only gave him 10,000 rupiah instead of 100,000 – a common scam in Bali I was glad to be aware of – or that we were bullied to buy photos we didn’t want. We were there to surf and the waves did not disappoint.

The water was filled with Japanese surfers mostly, two of them bad-ass chicks that were catching all the waves. The tide was going out and the sets were sporadic but my husband and I managed to catch a few fun lefts anyhow.

At one memorable moment we heard a Hindi call to prayer coming from a temple’s loudspeaker on shore. Paul wondered if it would be sacrilegious to take a wave during it. I joked that surely it would be respected since surfing was our our religion, but it seemed that even the ocean took that moment for reflection. We all sat in silence, captivated by the timber of his voice. As the prayer ended so did the calm. A mighty set rolled in and all was in motion again.