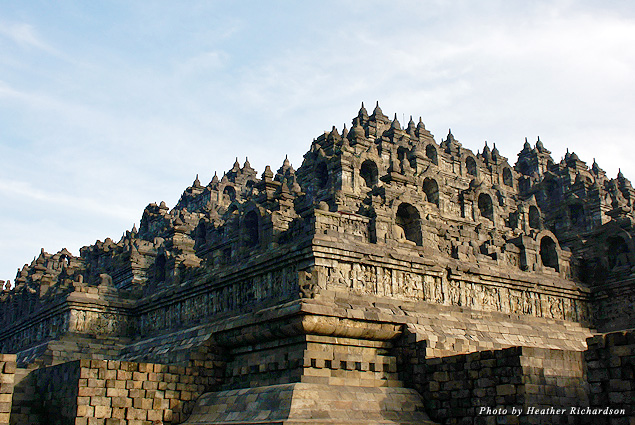 It was only when I lowered my camera and took the time to actually look at the magnificent sight before me that I realised how sublime it was. I’d seen plenty of photos of Borobudur Temple, but I had always suspected most of the dramatic sunrise images had been heavily edited in Photoshop. I can’t claim those images of Borobudur weren’t doctored, but I can say they needn’t be; watching the sunrise from the top of this ancient temple in Indonesia was a truly awe-inspiring experience.

Three hundred years older than Cambodia’s famous Angkor Wat, Borobudur is the largest Buddhist temple and one of the most striking ancient sites in the world. Built between CE 750 and 842, Borobudur was unearthed from under the cover of wild jungle in the 19th century. The name is taken from the Sanskrit ivihara Buddha uhf, which means “Buddhist monastery on the hill.”

The temple itself is incredible—a pyramid-shaped structure with 72 stupas, each housing a statue of the Buddha set along the top tiers—but the landscape in which it is situated is partly what makes Borobudur such a spectacular sight to behold. Central Java is a terrain of thick, lush rainforest and hulking, active volcanoes; Borobudur perches on its hilltop amid this dramatic scenery. 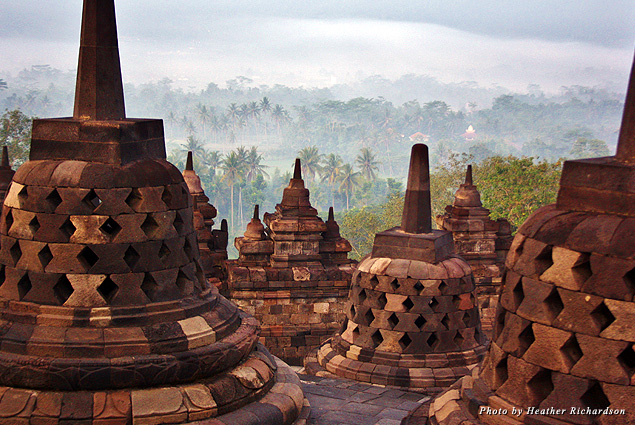 The closest main city to Borobudur is Yogyakarta (known also as Jogjakarta or simply Jogja), an hour’s flight from Jakarta. From here, Borobudur is about 90 minutes’ drive, traffic dependant.

I stayed at Plataran Borobudur, just a few minutes away from the temple, as I wanted to do a sunrise tour of Borobudur. This is the best time to see the temple. You can travel from Yogyakarta, but because you need to arrive between 4 and 4:30 a.m., I’d recommend staying closer. I was only at the Plataran for one night, but I would suggest staying two or three nights, so as to make the most of the epic trekking around the region.

The hotel was gorgeous, with a mixture of colonial and traditional Indonesian styling, and a view of Borobudur, which poked out of the tree tops in the distance. It was very quiet when I arrived, and I had the pool all to myself for the majority of the afternoon. From the terrace of my cabana, all I could hear was the clicking and chirping of the rainforest and the occasional call to prayer echoing through the valley. 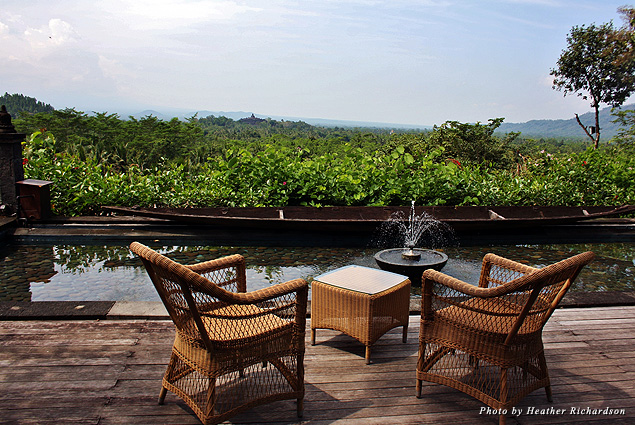 In the morning, I rose at 4 a.m. and was driven the short distance to the Manohara Hotel Borobudur, just outside the park. The Manohara runs private sunrise tours, so the only way to get into the temple complex before its official opening time of 6 a.m. is through the hotel. Sunrise tickets for foreigners not staying at the hotel are around $40 (R380,000).

I’d estimate there were around 40 or 50 in the group. The space at the top of the temple isn’t huge, and with everyone facing the same direction, it’s a good idea to arrive at the temple on time and make sure you’re not one of the last to reach to top. This should ensure you get a good perch.

I was handed a flashlight and a sarong to wear (it didn’t appear to matter if you were wearing trousers, as everyone was told to wear one), and then at about 4:30 a.m. the group headed through the dark park to the foot of Borobudur.

It was too dark to see the temple, so I just had to follow the beam of my flashlight focused on the tall stone steps that led to the top. After a short climb, I arrived at the top tiers, the stupas rising out of the pre-dawn gloom. In each one of these stupas—measuring more than twice my height—was a statue of the Buddha and a couple of them had been opened up, revealing the cross-legged statue. 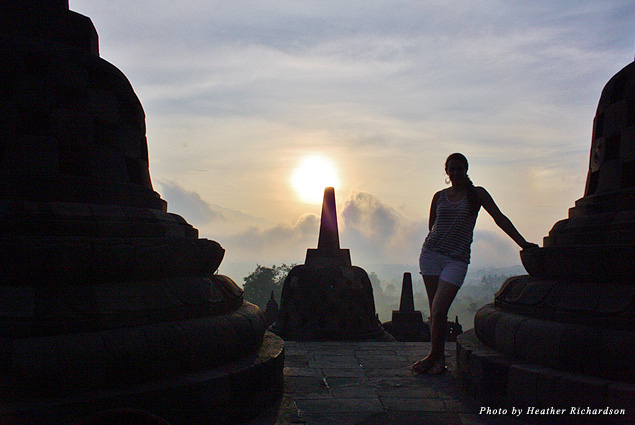 Once everyone had climbed up to the top and found a place from which to watch the sunrise, the wait began. Then, gradually, the sky began to change. As the light started to bleed over the horizon from behind the great shadow of the volcano Mount Merapi, the valley beneath the temple emerged, mist rising up from the tree canopy. A lilac haze was cast over the landscape with the silhouette of the stupas in the foreground. The sky was washed in an apricot hue, and birds flew up from the trees, their morning song filling the air. 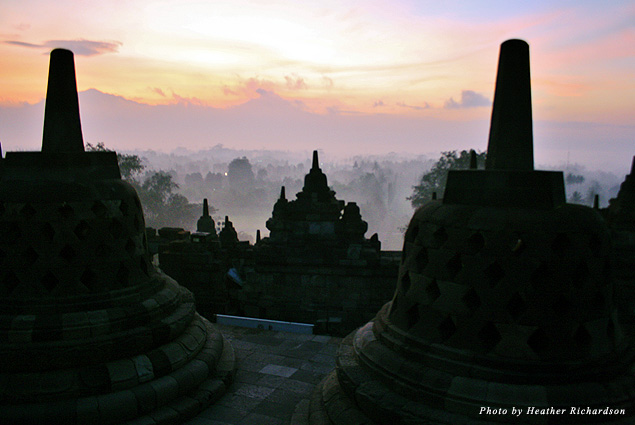 That was the point when I put my camera down for a few moments and just stood there, taking it all in. There was something so tranquil about the scene, despite the others around.

A few years ago, I watched the sunrise at Angkor Wat, but that experience paled in comparison to this view. This was much more memorable and vivid, both visually and in its ambience, with an unexpectedly spiritual atmosphere that reminded me of visiting the Taj Mahal. It was incredible to think these Buddha statues had silently witnessed this natural spectacle play out every morning for more than 1,000 years.

The colours changed from purple to peach, the sun cleared the horizon, and the mist evaporated. People started to leave, keen no doubt to get back to their hotel for a much-needed coffee.

This turned out to be an excellent time to stick around. The site opens to the public at 6 a.m., but between 5:30 and 6, there’s a quiet period. This is a great opportunity to walk around the temple, take some photos without anyone else wandering into the frame, and enjoy the quietness. 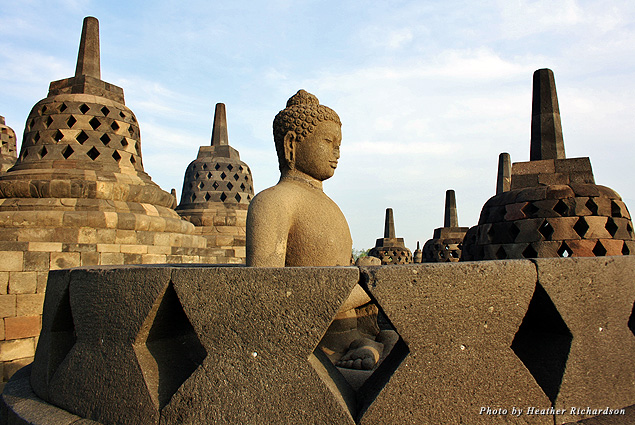 It didn’t last; by 7 a.m., the temple was mobbed with what seemed like millions of schoolchildren (take note: the end of May is a holiday in Java), and I ended up being a bigger attraction than the temple itself as I sat on a wall and was faced by a sea of camera phones and giggling teenagers.

I took that as my cue to leave, but not before I’d had a walk around some of the lower tiers, where there are more Buddha statues and hundreds of panels depicting scenes from holy texts. 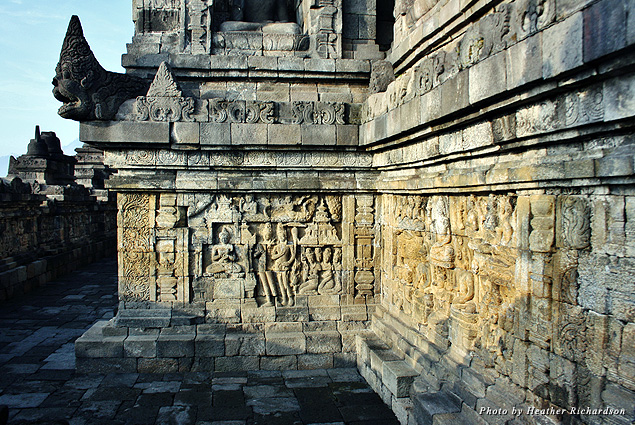 You can take a guided tour of the temple, but I’d recommend experiencing sunrise by yourself. If you want to find out more about the history and the meaning of Borobudur, you can organise a tour for later on in the day (although I would strongly recommend checking if it’s a school holiday!).

Borobudur is an essential part of any trip to Java, and I can only see it becoming increasingly popular as travel becomes more accessible to more people throughout the world. My advice? Go now.