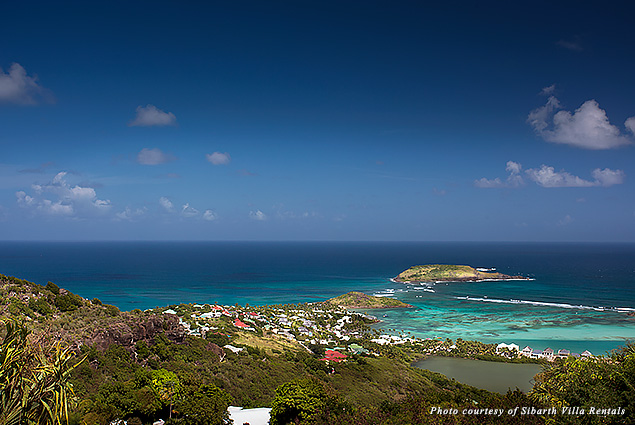 Let’s just go ahead and get this part of the story over with: I was turning 40, the big 4-0. And I was not happy about it. As I contemplated the various ways I could numb the pain, my thoughts inevitably turned to travel. If I could just be in a beautiful place surrounded by friends, that would make it all better, right?

I chose the Caribbean island of St. Barts in the French West Indies—known for its French chicness, white sand and clear blue water, amazing restaurants, designer boutiques, and dance-until-dawn nightlife. I then chose several friends that have been along for the ride with me throughout my life, from friends I’ve had since Kindergarten to the friends I’ve made as an adult.

Instead of staying in a hotel, I did what many people do who visit St. Barts: I searched for the perfect villa to rent. I started with Sibarth Villa Rentals, a bespoke villa rental agency that has been renting villas in St. Barts since 1975 (coincidentally, the same year as my birth!). Julie, a villa specialist at Sibarth, helped me narrow down the wide field of villa choices to Villa Bibi, a four-bedroom villa in the hills of Vitet with a private pool and views of the Caribbean Sea.

Our group of five 30-somethings arrived in St. Barts via a 15-minute Winair flight from St. Maarten. The landing into St. Barts, consisting of a steep descent over a hilltop onto an extremely short runway of a little more than 2,000 feet, is touted as one part impressive, one part terrifying. Our flight itself was one part celebrity sighting (Dr. Oz sat behind us), one part fun roller coaster, and we landed without incident. Within minutes we breezed through customs and collected our bags in the tiny airport. 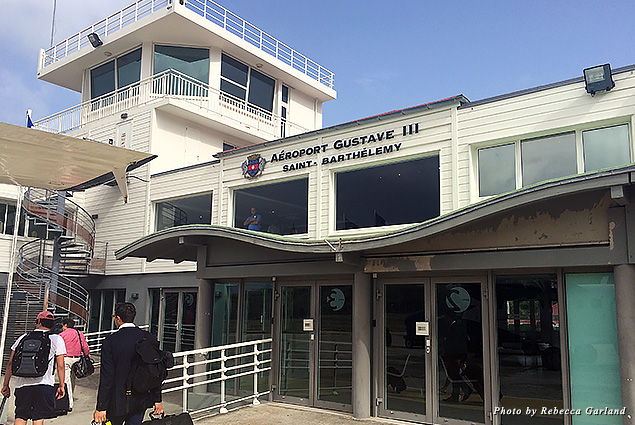 Sibarth provided us with our own personal concierge, Alex, to assist us during the week. Alex met us at the airport and shepherded us through the process of renting a car, which we then used to follow him to Villa Bibi. Twenty minutes later, we walked into the villa and were absolutely blown away—the pictures had not done the place justice. Villa Bibi was built to feature the outdoors with its pool, sun loungers, and covered deck with several areas for both lounging and dining. Palm trees and greenery surrounded the villa giving it a secluded feel. 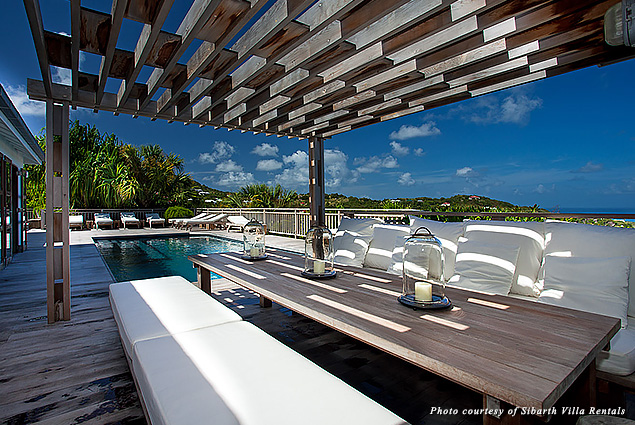 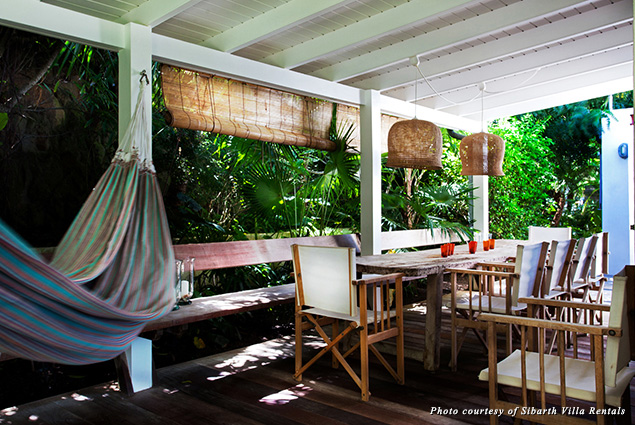 We took a quick tour around the interior of the villa, including the oversized kitchen with a refrigerator built flush into the wall, a pantry, a gas stove, a wine refrigerator, a dishwasher, and a shelf filled with liquor Alex assured us we were welcome to drink. The dining room just off of the kitchen provided an indoor option for eating, and the living room offered ample seating on all-white sofas and chairs, the perfect backdrop to the room’s colorful accents and quirky collections of globes, books, and straw hats. 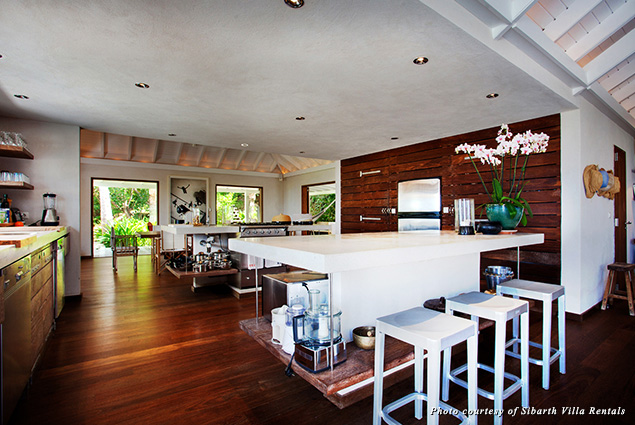 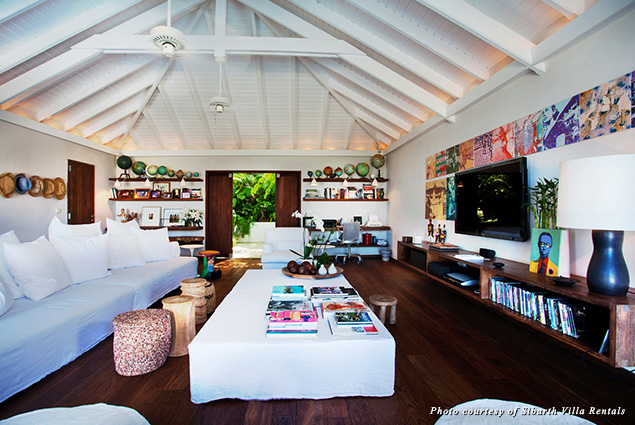 After checking out Villa Bibi’s common areas, we took a peek in our individual bedrooms, three of which opened directly to the pool deck and one of which opened at the back of the villa, offering the room and its outdoor shower additional privacy. Each of the bedrooms had ensuite bathrooms as well as ample closets, shelving, and hangers—a necessity for a group of women who did not pack lightly. 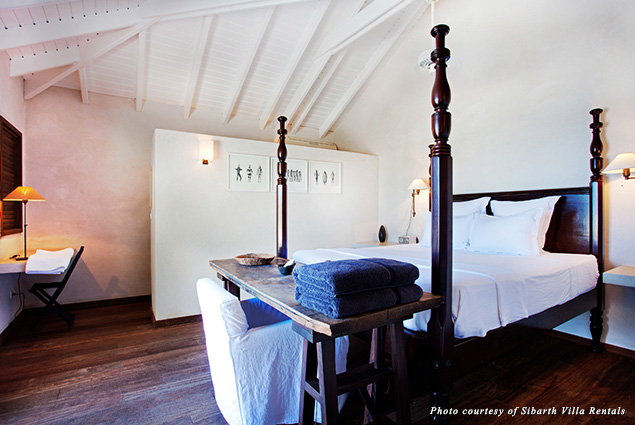 Alex left us with the keys and instructions to text him if we needed anything at all. After unpacking, we drove to the largest grocery store on the island, Marché U, where we stocked up on food and wine for the week. Back at the villa, we snacked on fruit and cheese courtesy of Sibarth while drinking champagne and swimming in the pool that was still warm from the heat of the day. 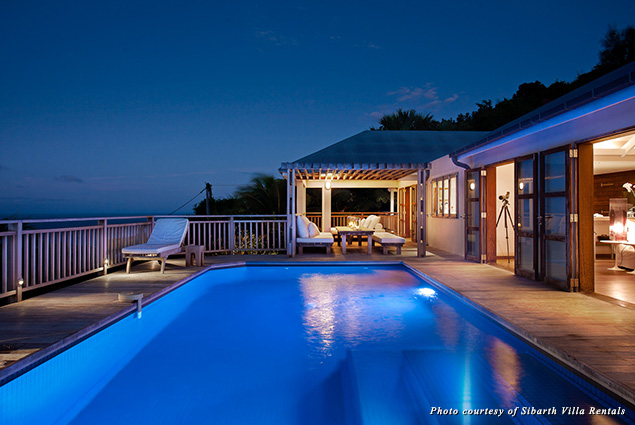 The next morning was Saturday. It was also birthday day and time for a reality check: I was 40 and no longer one of the 30-somethings. I was able to suppress a sob after seeing the gorgeous reality that greeted me outside my bedroom door. Just as I had suspected, it was easy to put a stop to wallowing in self-pity while in St. Barts. 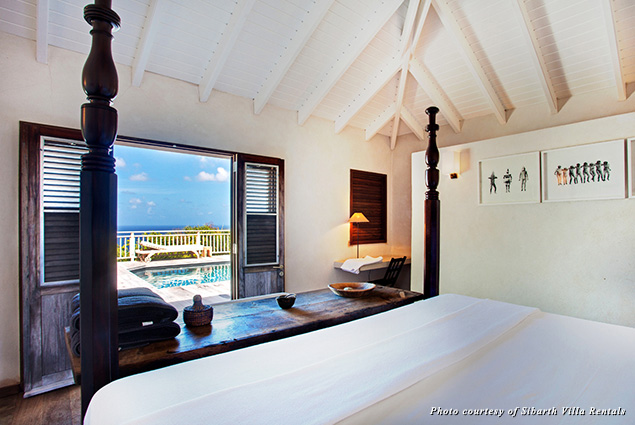 We kicked off the day at Tom Beach Hotel’s La Plage Restaurant, which hosts a weekly Bikini Brunch. Though we weren’t wearing bikinis, the models who provided a fashion show during our lunch were. A DJ played music, making the scene feel more like 11 p.m. than 11 a.m., but in St. Barts it worked. Inflated pink flamingos hung throughout the restaurant, and upon learning it was my birthday, La Plage gifted me a pink flamingo, which we promptly named Delphine and carried with us all over St. Barts.

Later that afternoon, it was time to get dolled up for the evening, so we headed to Salon Cristophe by MARCO. Nothing was lost in translation as the French stylists gave us exactly what we wanted—chic hair and makeup. After changing into cocktail dresses, we had a birthday toast at the villa while waiting for our taxi to arrive, arranged in advance by Alex.

We arrived at Le Ti St. Barth, an institution on the island and the place at which everyone ends up at one point or another, including our fellow flight passenger, Dr. Oz, who was seated at a nearby table. Our table was right next to the stage where Le Ti performers put on cabaret-like shows throughout the evening.

After we finished our meal, a parade of Le Ti staff, led by our server, arrived at our table carrying a decadent chocolate birthday cake and lit sparklers. I made a wish big enough to match a 40th birthday and blew out the candles. Shortly thereafter, the Le Ti staff stole one of my friends and me away to a private dressing room full of costumes, allowing us to dress up as a pirate and a cheerleader, respectively.

The party at Le Ti kicked into high gear at around 11 p.m., when plates were cleared to make room for diners to climb on top of their tables to dance. Much later, as Le Ti was winding down for the night, we were just getting wound up, so our server directed us to The First, an after-hours nightclub in St. Barts’ Gustavia harbor owned by Carole Gruson, a legend in St. Barts known for her chic establishments including Le Ti and another nightclub, Le Yacht Club.

The next morning, we managed to rally and prolong the birthday celebrations a little longer by heading to Nikki Beach’s Sunday party. Dr. Oz made his third appearance in as many days, sitting just behind us as we ate lunch. After a delicious meal, we checked out Nikki Beach’s boutique filled with colorful bikinis and cover-ups and then headed to two daybeds with umbrellas, which we had reserved. We spent the next several hours lounging, people watching, swimming, and later, when we were hungry again, eating a sushi platter served to us at our daybeds.

Once the birthday festivities were over, we settled into a groove of sleeping in late, eating breakfast at the villa while drinking coffee and chatting about all the things we might do that day, napping by the pool, lounging in Villa Bibi’s hammocks, planning our festivities for the night, and then finally getting a move on at around 8 p.m. In other words, we had no agenda and it was the perfect relaxing vacation.

Alex was a tremendous help, arranging for—and personally delivering—snorkel gear and recommending restaurants around the island and making reservations so we had to think about very little. Based on food and service alone, two of our favorite meals were at Sand Bar at Eden Rock Hotel and Bonito in Gustavia.

We designated one day for shopping, browsing stores on both of the major areas of the island for shopping: Gustavia harbor and St. Jean. In addition to the usual suspects—Louis Vuitton, Hermès, Cartier, and Roberto Cavalli—we found gifts for loved ones (and for ourselves) in small boutiques including La Casa del Habano (Cuban cigars), Elo’dine (French lingerie), Ligne St. Bart (bath and body products), and Stéphane & Bernard (women’s clothing).

We also found some of the best shopping on the island to be contained within the hotels and restaurants. In addition to Nikki Beach’s boutique, we also checked out boutiques while having lunch at Cheval Blanc St-Barth Isle de France and Dõ Brazil. Fantastic lunches followed by boutique shopping just a few steps away made me realize yet again how St. Barts was not only the perfect escape for turning 40, it was also the perfect girlfriends’ getaway.

We decided to spend our last night in St. Barts at Bagatelle, a restaurant that, like many other restaurants on the island, does double duty by creating a club-like atmosphere late in the evening. We wanted to complete our trip with a bang, and it seemed there was no better place than Bagatelle to celebrate. The night started out calmly enough with groups of friends sitting at tables eating delicious French fare while a DJ played soft music in the background.

As the night grew later and the music volume increased, signifying a shift from dining to dancing, one of the ladies tipped off our server that it was my birthday week. Two servers appeared by my side and whisked me outdoors through Bagatelle’s kitchen. A scooter and its driver were waiting for me as well as a leather bustier and bandana, which they encouraged me to wear to complete the “biker look.” I did as I was told, including jumping on to the back of the scooter while holding onto the driver with one hand and a champagne bottle lit with a sparkler with the other. We rode into the restaurant while AC/DC’s “Highway to Hell” blared and the restaurant-goers cheered.

The surreal experience continued throughout the night as we took off our shoes and danced on top of our table for the next several hours. The next morning, we said our sad goodbyes to Villa Bibi and to each other. When I contemplated turning 40, I never anticipated it would be the best birthday I ever had. There was only one explanation: St. Barts.