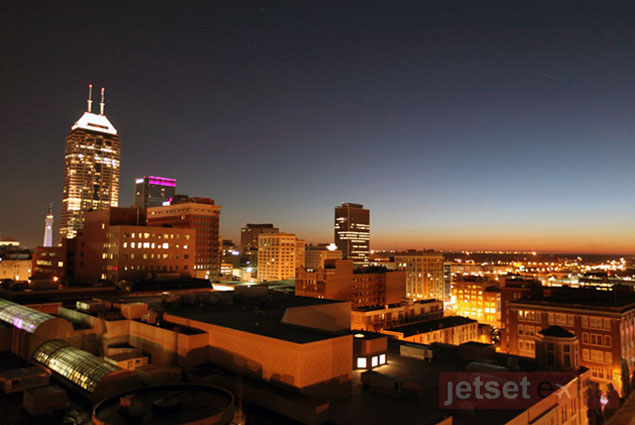 The Midwest of the United States is not somewhere I visit often, but two of my favorite TV shows, “Parks and Rec” and “The Middle,” are both based in Indiana. Noted author Kurt Vonnegut, artist Robert Indiana, and late night host David Letterman also all called Indiana home. So I thought it was about time I spent some time in “the Middle.”

I went on my trip to Indianapolis with some preconceived ideas of a city made famous by car racing and sports teams. I had two days to see and do things that would change my mind and make me think this city would be somewhere I’d want to go again.

Misconception No. 1: Midwest food is all the same, full of gravy, and bad for you.

The food I ate was far from the biscuits and gravy, deep-fried chicken-fried steaks, and Midwest Betty Crocker Cookbook ideas I had in my head. Instead, the food I ate was European inspired and full of creativity and flavor. Here are the places that changed my mind and made me a believer in Indianapolis’ food scene: 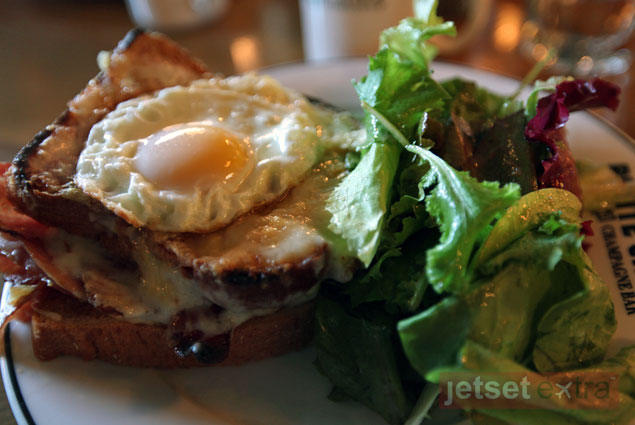 Petite Chou is in Broad Ripple, Indiana. This adorable restaurant is casual and relaxing and was named one of America’s best French restaurants by Travel and Leisure Magazine. Owner Martha Hoover opened her first restaurant, Patachou, more than 20 years ago and has since expanded with other locations around the Indianapolis area.

I was able to get my morning cup of full-bodied coffee and a delicious croque-madame sandwich for breakfast. Each bite was a treat, and by the time I was done I couldn’t believe I had eaten the whole thing. The portion sizes were great, and I for sure wasn’t going to be hungry until dinnertime. 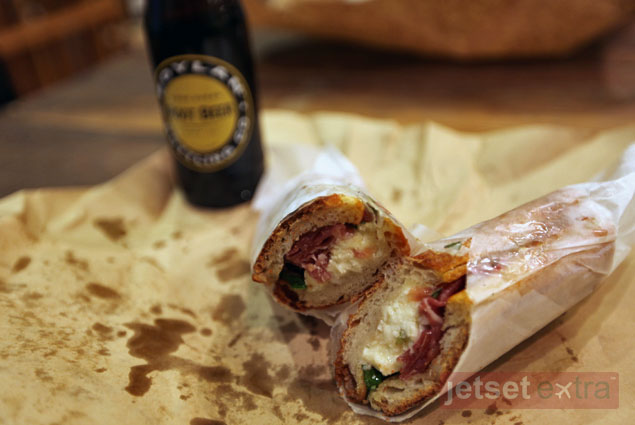 Goose the Market is in a historical neighborhood between downtown Indianapolis and Broad Ripple and is known for its Batali sandwich (named after the chef? I don’t know). I was super impressed with the array of options I had. The cases hold cured meats and cheeses from around the world, just waiting to be placed between two pieces of bread and toasted to perfection. Wines and beers made locally or from some other far-off land are available to quench that thirst you will work up eating your sandwich. It’s a bit of a one-stop shop for food enthusiasts; one can eat lunch and shop for dinner at the same time. It was a great late-afternoon stop.

Black Market, located at the end of Massachusetts Avenue, is best described as a gastropub. Its ominous entry and unmarked exterior lead you to believe you are among the elite foodies of Indianapolis. The menu is simple but unique. Menu items include daily pickles, such as pickled turnips, beets, and Indian-spiced pickled eggs with peanut butter. I know … I thought the same thing. It was SO good.

I ordered the lunch special: tacos with sweet potato, bacon, tomatoes, and greens with feta cheese. Each unique flavor enhanced each bite, and quite frankly I couldn’t stop eating them until they were gone. 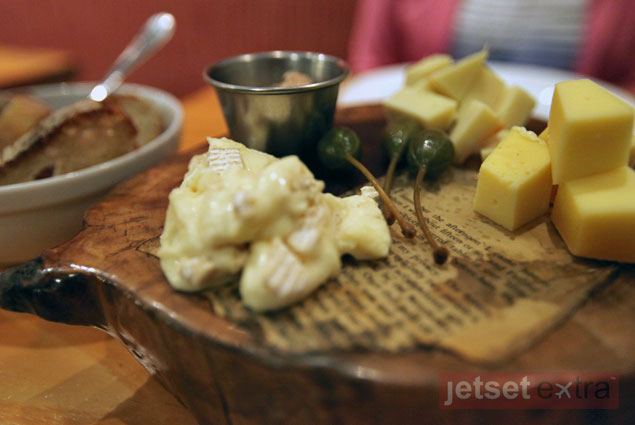 Bluebeard is located in Fountain Square, which is very hip and up and coming. I loved my time there. It felt very small town within a big city, from its vintage storefronts with funky interiors and fun things to shop for to the quiet streets to meander through.

Bluebeard is based on the Kurt Vonnegut book of the same name, and all the food and drinks are named within the theme. My dinner was slow and very enjoyable. I had a cheese platter, for which the server was awesome enough to choose three great cheeses for me, served with giant capers and apple chutney. I also tried the duck confit salad; can you say, YUM? For my entrée I had Fideo (like paella but with vermicelli noodles). The Fideo was probably the best I’ve ever tried, with rich flavors from the toasted noodles and the cured meats and fish. Love at first bite.

In downtown Indianapolis, St. Elmo Steak House is a cornerstone of the city. This is one of the original restaurants in Indianapolis, and it has been serving customers great steak dinners since 1902. I couldn’t leave the city without trying St. Elmo’s famous shrimp cocktail, which has been called the spiciest shrimp cocktail in the US due to the freshly grated horseradish cocktail sauce the restaurant makes every day. I love a spicy anything, but I will admit it got me. My eyes watered and my sinuses have been clear for the last week. I would do it again in a second. 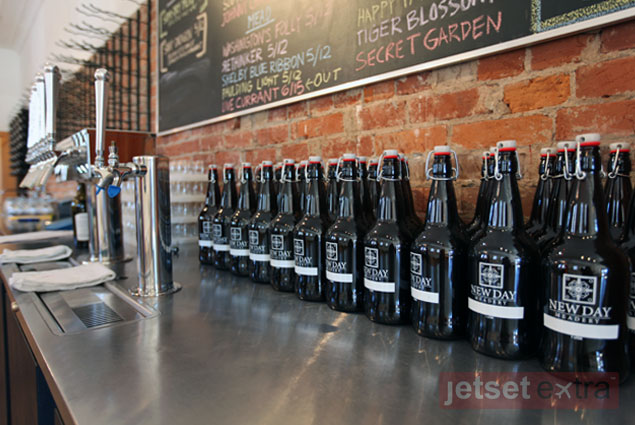 Have you ever heard of mead? I had never heard of it until I was introduced to New Day Meadery. A husband-and-wife team who had too many bees and so much honey they didn’t know what to do decided to make wine and hard cider. I love honey, so getting to taste cider and wine made from it was a pretty special treat.

Misconception No. 2: Sports culture is the only culture in Indianapolis.

Cultural experiences do not revolve around racing, football, and basketball, not that those are bad. I was very impressed with the art and history available to visitors in Indianapolis. The city is second behind Washington, DC in the amount of monuments and memorials it has. 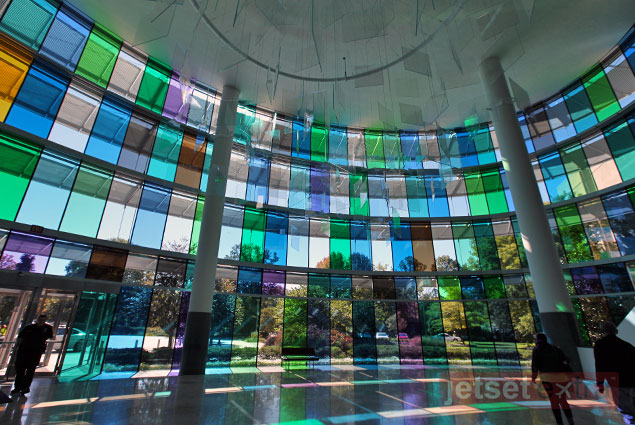 The Indianapolis Museum of Art (IMA) is huge. Not only does it have a very large collection of works by famous artists and sculptors, but also it was gifted 100 acres of land by the Lilly family, including the Lilly family home. More than a dozen outdoor art installations are available for visitors to walk through and view at their own pace. Some are interactive, so families with children will be thrilled they don’t have to warn the kids not to touch or climb on the art. It’s there to be played with.

The Indiana War Memorial is a touching dedication to the men and women who have given so much for our country. This is not just a memorial but also a museum run by General Goodwin, Indiana’s highest-ranking general. The monument was originally built to memorialize the men who fell during World War I (the war to end all wars). There are some very interesting features including different types of stone that make up the structure of the building. The stones come from all the different countries involved in the war to memorialize the Allies who fought alongside our soldiers to help end the conflict. I loved the Shrine Room, where the US flag hangs high from the ceiling over a beautiful handcrafted shrine. General Goodwin took me up to the catwalk so I could get an extraordinary view of the shrine and flag. It was a touching and proud moment.

”The fundamental intent of the Shrine Room, the emotional and architectural core of the Memorial, was to inspire citizenship amongst all who visit. Inspiration will come from the room itself, its architectural treatment, its shape and lighting, which all form a magnificent setting for the American Flag hanging from the center of the room and the lighted Star of Destiny above.”
-IWM website 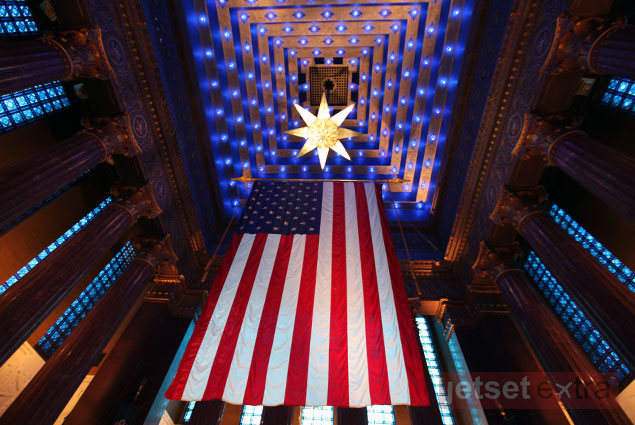 The Indianapolis Cultural Trail is a great way to see the city of Indianapolis in one day. From the cultural areas and entertainment venues to the outdoor pieces of art and sights to see throughout the neighborhoods, the well-marked trail is easy to navigate whether on a bike or by foot. Bikes can be rented at the YMCA, or some hotels such as the Conrad have bikes for guests to use. It’s a great daylong activity, and I loved it.

Misconception No. 3: Indy racing is the only racing done at the Indianapolis Speedway. 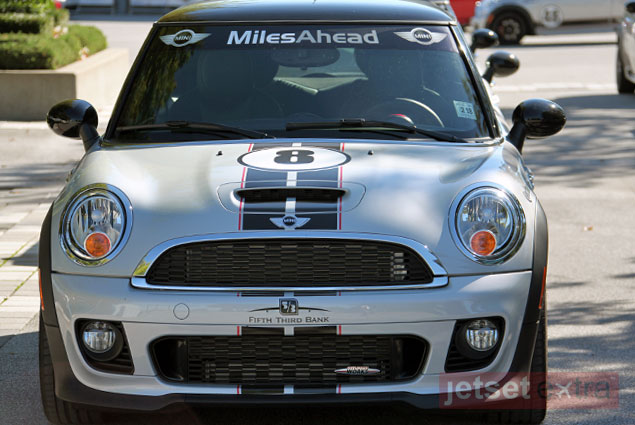 I love driving fast, and any chance I get to drive fast I take it. The Miles Ahead Driving School at Indianapolis Speedway offers courses for drivers to learn fundamental driving skills used by professional racecar drivers. I had never driven a Mini Cooper before, but the handling and breaking abilities these cars have are amazing. My instructor, Steven Simpson, is the country’s youngest Formula Ford Champion. He gave me a two-way radio and drove ahead of me all while guiding me through the techniques needed to navigate the course we were driving. It really was a blast. All the instructors at Miles Ahead Driving School are highly accomplished professional racecar drivers who gently guide participants through the different courses. The offerings range from Mini Performance Motoring School, Mini Teen Motoring School, Mini Fleet Motoring School, and Mini Clinics. This is a must-do experience for visitors to Indianapolis.

Thank you, Indiana, for changing my mind about “the Middle.” I would go back in a minute.