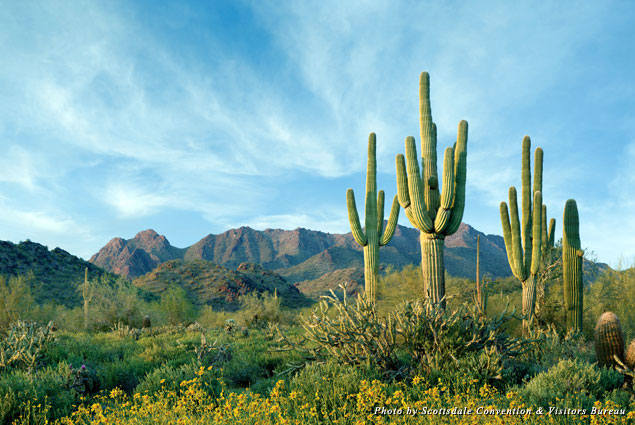 Summer is when Seattle weather is at its best. Arguably, summer is also when Scottsdale weather is at its worst. I had never visited the city so I had no preconceived notions beyond the ambiguous “dry heat” and a few choice comments by friends about being crazy for trading Seattle for Arizona in July. I ignored the warnings; summer in Arizona equals low season, and low season equals luxury accommodations at low prices. Because I jet set on a budget and Scottsdale is a mere two-and-a-half hour flight from my home in Seattle, it was too tempting to pass up. I packed a few bikinis and some sunscreen and was off.

We touched down in Phoenix on a Thursday. The 105-degree heat hit us as we walked out of the airport. Undeterred, we picked up our rental car and headed to The Mission in Old Town Scottsdale for lunch. 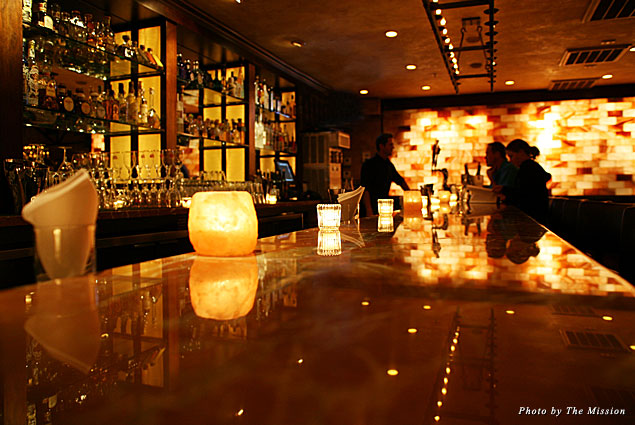 Angel was our server and, noting his obvious familiarity and pride in the modern Latin restaurant’s menu, we put our lunch in his capable hands and allowed him to select his favorite items. We began with mojitos, Mexican style. Instead of the usual rum mojitos, these cocktails were made with tequila and, for sweetness, agave nectar in place of sugar. Along with our drinks, Angel prepared an order of guacamole tableside, allowing us to choose the level of spiciness we preferred. What followed was a series of dishes—grilled street corn with butter, chili paprika, aji rocoto, cilantro, and cotija; a Kobe beef hot dog topped with bacon, grilled chili pintos, cotija, and grilled onions; and pumpkin bread pudding—each one better than the last.

There was one dish, however, worth going to the Mission for alone: the award winning almejas al vapor, a Peruvian clam stew with rock shrimp and chorizo. We could have gone back to Seattle then, sold on Scottsdale based simply on its Peruvian stew, but it was time to check out the rest of the city’s offerings.

Following lunch, we checked in at the Four Seasons Resort Scottsdale at Troon North. Located in the foothills of Pinnacle Peak in north Scottsdale, the Four Seasons has 210 guest rooms, including 22 luxury suites, housed in one- or two-story adobe casitas. The rooms are decorated in a Southwestern style, bringing the outdoor color palette inside. 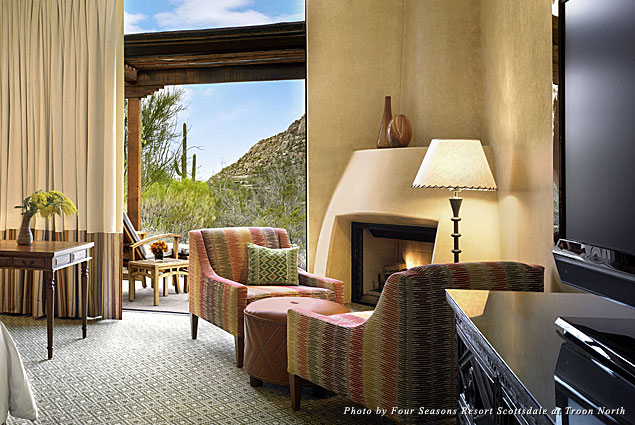 Suites provide the ultimate enjoyment of the desert scenery, with private plunge pools and outdoor fireplaces. Patios and balconies off the rooms offer views of the Sonoran Desert or rock formations along mountain peaks. 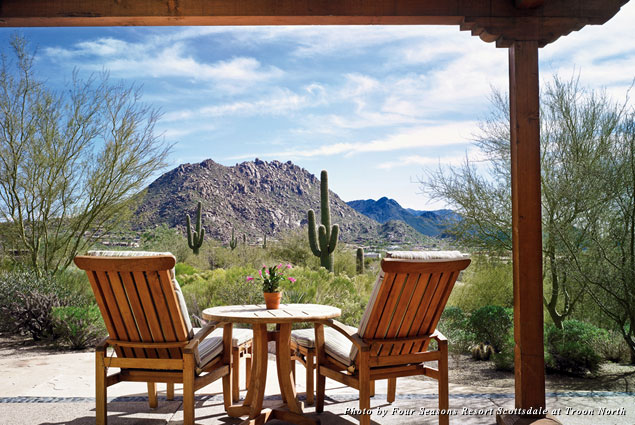 Though perfect for couples, the resort is also family friendly, offering a kids camp with a variety of scheduled activities such as pool time, scavenger hunts, games, and nature walks for children ages 5 through 12.

We had a few hours before dinner and decided to check out the pool. The Four Seasons Scottsdale’s pools are divided into a kiddie pool, a family pool, and an adult pool, all of which are surrounded by covered cabanas. A pool hostess greeted us and led us to a cabana by the adult pool, covering our lounge chairs in towels and bringing us a pitcher of ice water. Misters rotated from the top of the cabana’s entrance, lightly spraying us with cold water. We ordered frozen drinks from our server then jumped in the water until it was time to get ready for a night out. 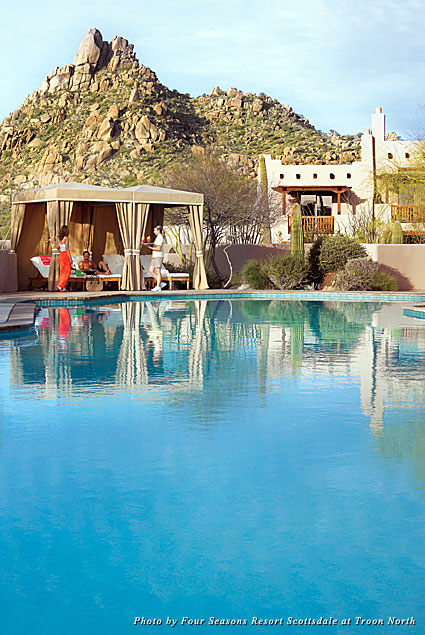 Dinner that evening was at Michael Mina’s Bourbon Steak, described as a contemporary steakhouse. We were impressed by Bourbon Steak’s wine cellar, striking architecture, and sleek décor before even opening our menus. 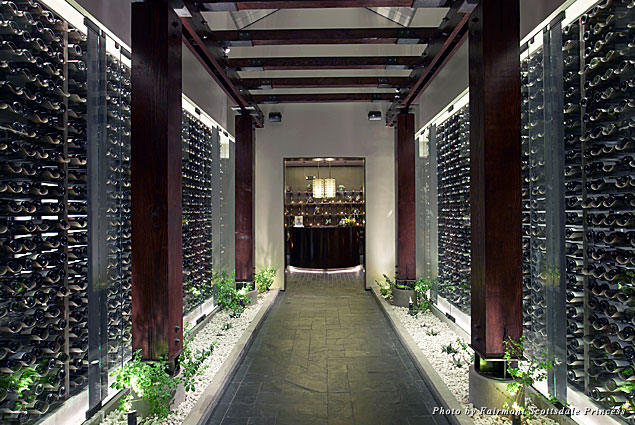 Drinks began with sparkling wine and food began with a trio of duck fat fries served with three dipping sauces. We moved on to a tiger shrimp salad with cucumber noodles, shiitake mushrooms, and tomato ponzu followed by a dish with a wonderfully deceptive name: bacon and egg. The deep-fried egg with a yolk that ran upon cutting through the fried exterior sat atop a pork belly confit with an onion soubise sauce, constituting one of the best and most inventive dishes I’ve ever had. I resisted ordering a second round of bacon and egg, moving on to flat-iron wagyu beef with sides of grilled Hudson Valley foie gras and shishito peppers served with soy and shaved bonito. The meal was rounded out with a perfectly sweet and salty Bourbon Bar of dark chocolate, peanut butter, and pretzel. 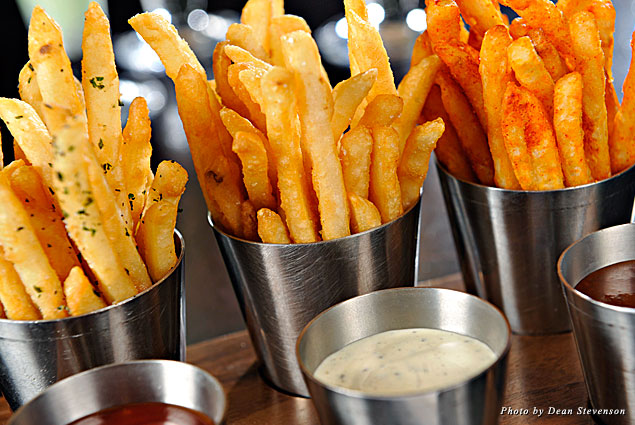 Friday morning began with a walk around the Four Seasons Scottsdale’s property. For guests who want to stay active, the resort offers a 24-hour gym, tennis courts, pools, and a variety of fitness classes including yoga, Pilates, spinning, and Zumba. Guided hikes to Pinnacle Peak are complimentary. Golf is just a shuttle ride away at the Troon North Golf Club. 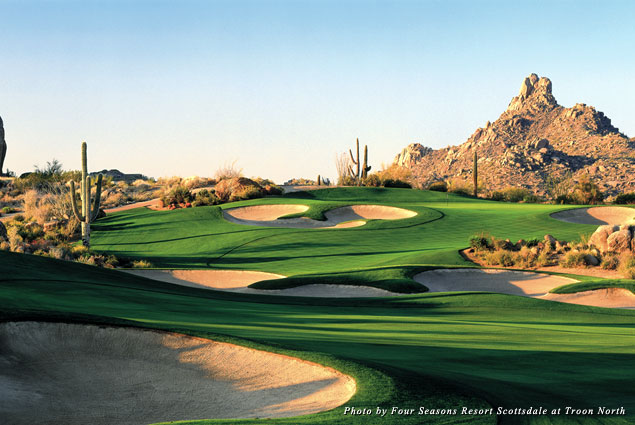 For guests who prefer to relax, the resort has a full-service spa and salon. The Four Seasons Scottsdale also offers a variety of special activities, including horseback riding, Hum-V or Jeep tours into the Sonoran Desert, or a celestial picnic under the stars, complete with a prepared meal, a telescope, and a celestial chart. 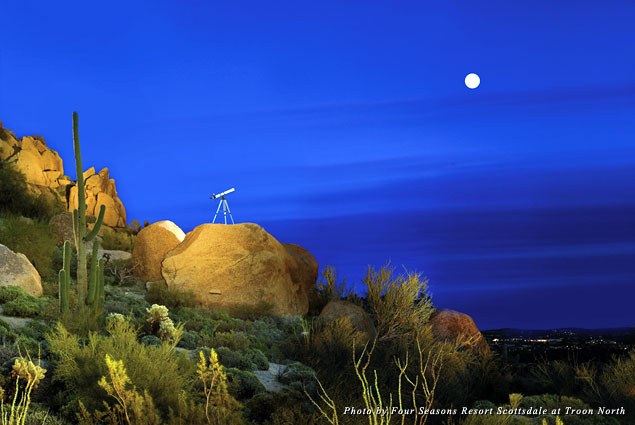 For lunch, we didn’t have to walk far, venturing across the property to the resort’s more casual restaurant, Proof Canteen. Open for breakfast, lunch, and dinner, Proof bills itself as an American canteen with elevated diner fare.

Lunch began when our server, Manny, brought us a plate of pretzel knots with a cheese dipping sauce. I nibbled on one to be polite (I had recently begun a gluten- and dairy-free elimination diet), but by the second bite, I was fully committed and ate three. Knots, that is. Not just bites. The elimination diet had come to a halt. I wanted to place a second order for pretzel knots but found the self-restraint to order lunch instead. We ate a delicious grilled peach and arugula salad and a smoked babe on a bun (a slow-cooked pork sandwich with sweet and sour coleslaw).

Despite our (weak) protests, Manny insisted we consider dessert. The dessert menu was extensive, and when my mind began to spin from all the choices, Manny made my selection for me, recommending “C” is for cookie. Cookie, indeed. The Oreo milkshake contained nearly whole Oreo pieces and was topped by a house-made chocolate chip cookie. After lunch, we returned to the pool for a lazy afternoon under the cabana.

Before dinner, we stopped for a cocktail at Onyx Bar & Lounge, just off the Four Seasons Scottsdale’s lobby. Despite the warm evening, we sat outside to enjoy a guitarist playing live music on the patio.

After one drink, we moved on to dinner next door at the resort’s steakhouse, Talavera. We again opted to sit outside where we could enjoy the sunset over Pinnacle Peak as we sipped sparkling wine.

Dinner began with a delicious chilled cauliflower soup. I then ate one of the best cuts of meat I’ve ever had, a buffalo tenderloin wrapped in bacon, topped with a brandied cherry glacé, and served with purple sweet potatoes. Our server, Shaun, surprised us with two desserts: flambrûlée (flaming crème brûlée with skewered fruit and a lemon poppy fritter) and chocolate soufflé with vanilla crème anglaise. When we finally pushed back from dessert, Shaun brought us each one final, perfect bite: cheesecake lollipops.