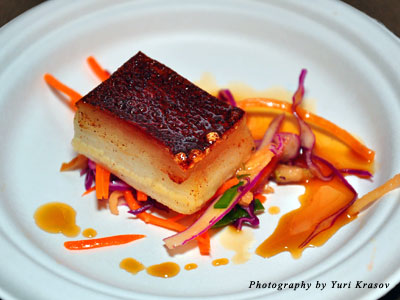 Since the National Pork Board dropped the slogan “the Other White Meat” in favor of “Pork. Be Inspired,” it’s a free-for-all in the fattening field. So if you agree with me that everything tastes better with bacon, go ahead, indulge in lard and marbling, forget lean, and be merry. Little-known medical research suggests that people with low cholesterol are prone to sadness as opposed to us cheerful carnivores.

Pork seemed to be the toast of the town this year at the beloved San Francisco culinary festival SF Chefs – both at the Grand Tasting Tent on Union Square and at the various satellite events. 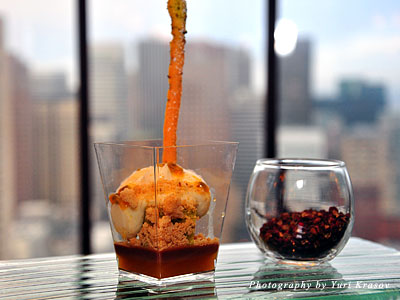 At the traditional Sugar and Spice party at the Westin St. Francis, David Lawrence of 1300on Fillmore presented braised short ribs with allspice and brown sugar, but we all know that without the porker, no spice or sugar would have made the cut. 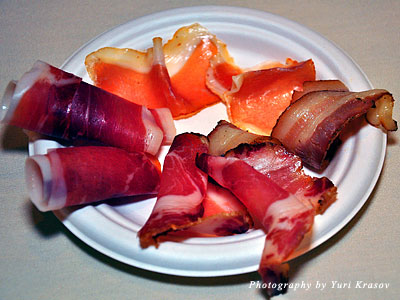 At the Talking and Tasting Pork seminar, Stephen Gerike of the National Pork Board and Herb Eckhouse of La Quercia, producer of artisan crafted meats from Iowa, introduced heritage breeds and the right way of “breeding, feeding, killing, and chilling” to assure pigs’ good acorn-fed life and gloriously delicious after-life.

There were four unique Tent events with scrumptious little tastes from a different group of chefs, bartenders and winemakers for each event. No human would be able to attend all of them without bursting at the seams, so please accept my partial report. 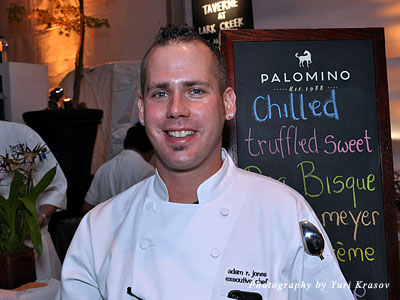 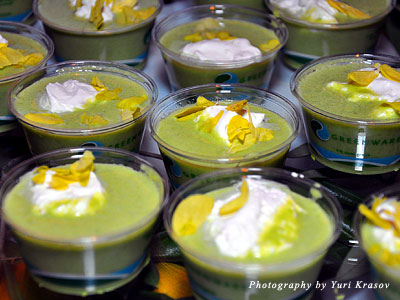 Scott Howard’s (Brick & Bottle) spicy ahi tuna parfait with avocado and wasabi cream lived up to its name – it was perfect. But so were eggplant caponatina with burrata by Ruggero Gadaldi (Beretta & Delarosa), crab cakes by Mark Dommen (One Market), Thomas McNaughton’s (Flour + Water) summer-squash salad with speck and sardine, and avocado and smoked paprika gazpacho sorbet by Adam Timney (Starbelly). There were also amazing chocolate treats by Angela Gong (Moss Room) among many other delicacies. 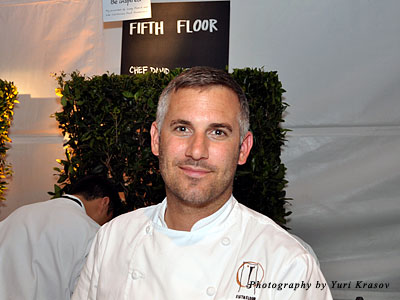 Lest we forget to be inspired by pork, David Bazirgan (Fifth Floor) created an inspired (and unforgettable) dish of suckling pig and foie gras cappellacci in Douglas fir consommé; Robbie Lewis (Bon Appetit Management Company) came up with pork and corn scrapple topped with a spiced strawberry; there was also excellent pork sausage by Dmitry Elperin (The Village Pub); pork rillette with green-tomato marmalade and smoked paprika by Gregory Short (Masa’s); pork and corn custard with bacon-rolled cherry by Tommy Halvorson (The Phoenix Supper Club); and shoyu ramen noodles with pork, cabbage, and bamboo shoots by Alex Morgan (Ozumo). 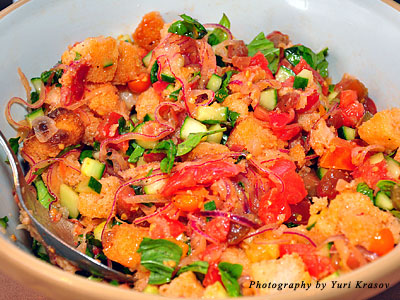 One beautifully simple dish attracted my attention by being equally delicious and easy to recreate in a home kitchen. Please enjoy an innovative version of tomato bread salad by Mark Gordon (Terzo & Roses Café): 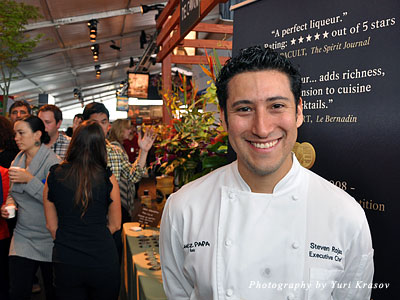