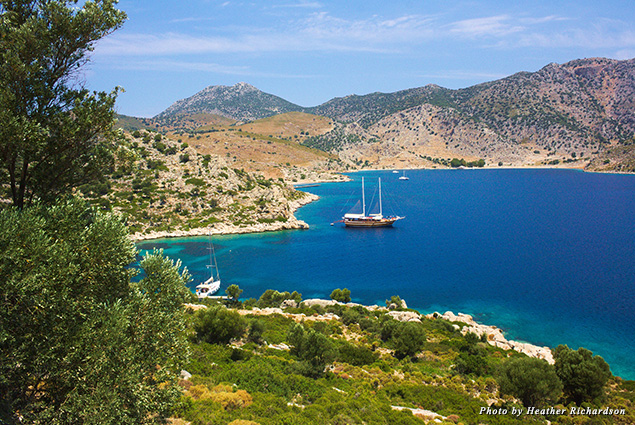 Emerging on deck after an uninterrupted night’s sleep, the warm sea breeze stroked my sun-darkened skin and my bleary eyes slowly focused in the soft, early-morning sunlight. Our handsome Turkish gulet was anchored in a small cove of azure-blue water, protected by towering limestone cliffs, rugged with deep gashes that no doubt inspired ancient tales of female fertility. Trees sprung out of the lower reaches of the cliff. A tiny, whitewashed church was the only building in sight, its structure half hidden by leafy trees with pink flowers. The occasional low clanging of goat bells could be heard as I poured myself a cup of steaming tea before morning yoga. 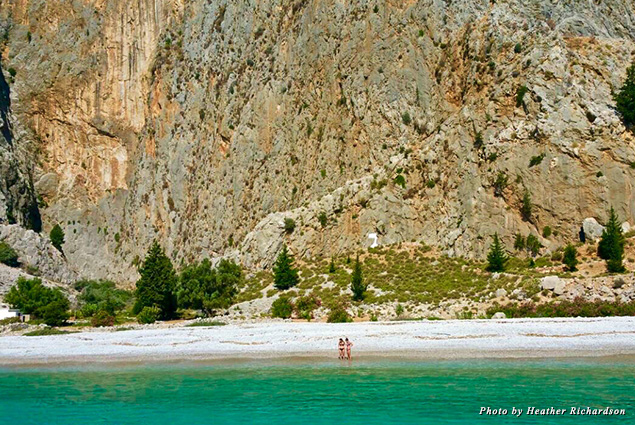 Kayadibi Beach was one of several stops on our one-week voyage from the Greek island Rhodes to the Turkish port town of Marmaris with Mediterranean Delights Fitness Voyage. Our vessel—the Muhtesem A—was a traditional gulet boat of polished wood, the striking red Turkish flag fluttering behind us as we cruised through the still, eastern waters of the Mediterranean Sea.

With eight double or twin en-suite cabins, the gulet has the capacity for 16 passengers plus a crew of four. The front deck by the bow was where we practised yoga twice daily and the back deck was where we ate all our meals around the communal dining table. Several couch areas and the sun-loungers on the top deck were where we spent most of our sailing time. Although the trip was billed as being a “fitness voyage,” it was far from a boot camp. The cruise can be as active as a passenger wants it to be, and all activities were optional—from swimming in the sea and hiking around castles dating back nearly 2,000 years to yoga and meditation sessions and games of backgammon. 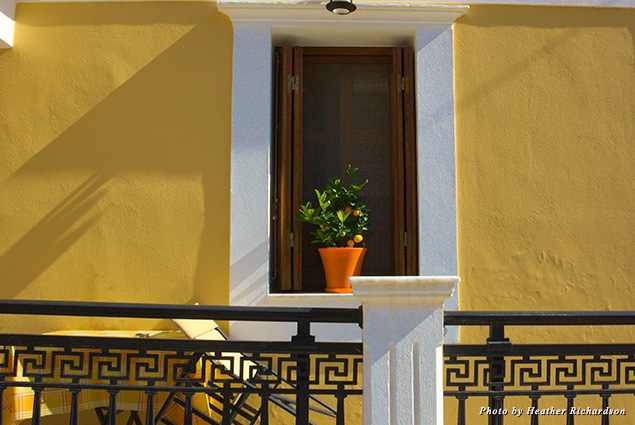 The combination of pre-breakfast stretching; sailing time, where one could simply stare at the horizon lost in thought; hikes with our guide, Ali, who has an encyclopaedic knowledge of Mediterranean history; diving into the cool, salty sea to swim to the shore; and evenings spent sipping wine and chatting on board our gulet was one that I found immensely restorative.

The boat was built by our captain, Aytekin, who came from a long line of seafarers; only his brother has stayed on land to run his bee farm, the produce of which we spread on our toast each morning. His other brother, a former wrestler called Adnan, worked in the kitchen on the boat, preparing healthy, fresh meals for us. The tahini with honey was a universal breakfast favourite, as was the dried version, halva, which we had for dessert on one evening. 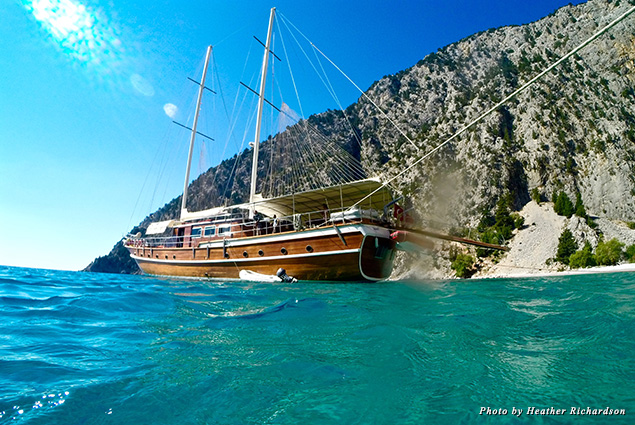 Aytekin told me about the one and only time he suffered seasickness—when he was seven years old—and the shot of seawater he was instructed to drink to combat it. It’s not a seasickness cure he would recommend; “very dangerous,” he warned me. His grandfather, now in his 90s, was one of the best sponge divers in the region, venturing 80 metres underwater in the old, cumbersome diving suits.

We met Aytekin’s grandfather later in the week when we were warmly welcomed to his home in the small Turkish town of Bozburan. His aunt, a round woman with a kind, smiling face and twinkly eyes, hosted lunch. We ate around a big table outside the whitewashed house, shaded from the midday sun by a network of vines. On the terrace, watching us devour the delicious spread of slow-cooked aubergines, courgette stew, and a mixture of rice, tomato, and mint encased in pumpkin flowers, sat our cook for the afternoon, the captain’s grandmother, her face deeply lined and her dark-eyed gaze intense. On our departure, she clasped hands with her guests and offered her cheek for a kiss. 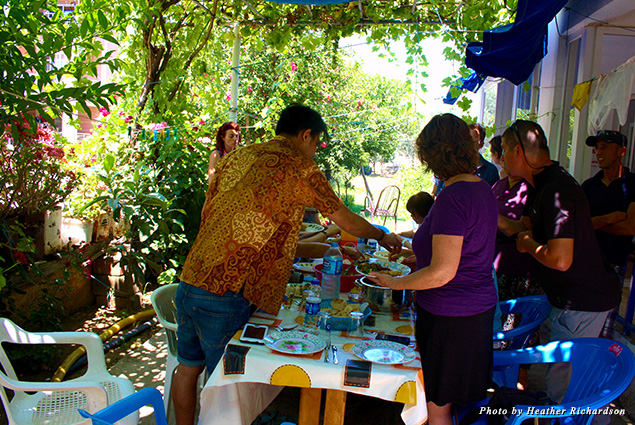 In contrast to this glimpse of local life, Symi harbour in Greece offered a different insight to the Mediterranean islands. Perhaps in keeping with the most common image of Greece, little stone houses painted white and pastel shades were stacked on the hillside around the harbour. Glittering yachts from countries including the Cayman Islands lined the port, sporting jet skis and young men in smart polo shirts busily polishing the gleaming railings. It’s not uncommon to spot the rich and famous in Symi, joining the less moneyed likes of me in browsing jewellery stores, which offer evil eye charms and chunky gold and silver cuffs and rings, or sipping chilled rosé wine at one of the street cafés that provided excellent people-watching opportunities. (We liked to play “guess the nationality” of our fellow tourists.) Later that night, our group bonded over throwing some ridiculous shapes in a bar, with the whole group—including the crew—getting whole-heartedly involved in the “YMCA.” 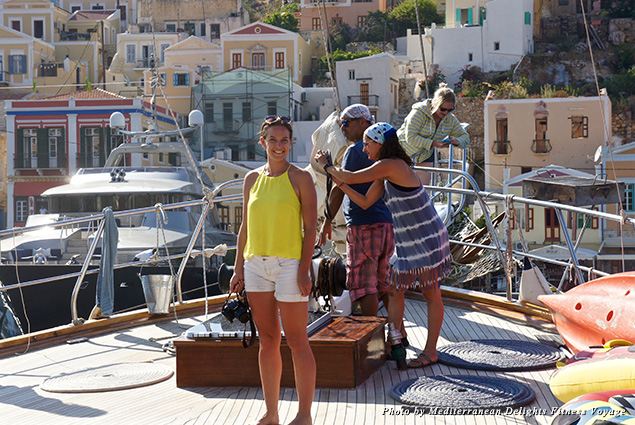 We were also taught to dance in a slightly more traditional manner with a belly-dancing lesson on the deck of our gulet. After tying jangling scarfs around our hips and sipping a glass of Champagne to loosen up, we learnt some basic steps, which inevitably culminated in twerking and violent shimmying not unlike a serious seizure. Fortunately one of our fellow passengers, a dance instructor from Florida, and a crewmember, Taner—a petite man with a smile that crinkled his entire face and dance moves to rival Beyoncé—showed us how it was done. 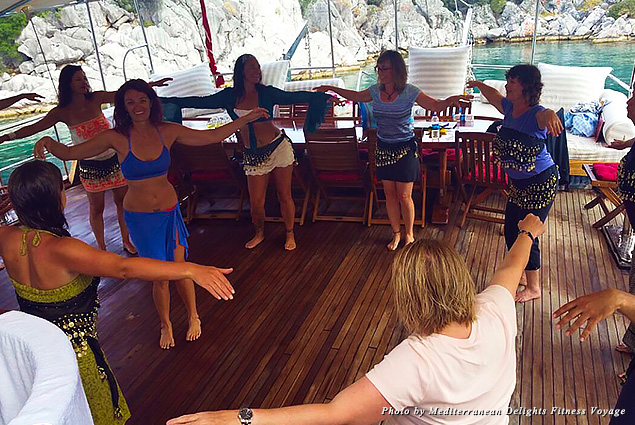 Aside from being a diva on the dance floor, Taner also used to work in a hammam, which was the final activity of the voyage at our last port of call, Marmaris. The youngest crew member, fresh-faced, 17-year-old Baruk joined us, but—as always, laughed the captain when we returned—he got too hot in the steam room and ended up just having a cold shower.

It was suffocatingly hot in the steam room. I was instructed to lie face down on the hot marble bench while an old man in a loincloth took to fiercely scrubbing the dead skin off my body using a loofah made of goatskin.

Once I was de-scaled, it was time to get me clean. Filling a plastic sack with bubbles, he blew into it, inflating the bag. He then brushed the bag over me and briskly washed me from head to foot, before helping me up from the slick surface and instructing me to sit next to one of the basins and free-flowing taps ringed by patterned tiles. Without further ado, he aggressively rubbed in soap into my hair before firmly taking hold of my head and pulling it back and then forward to unceremoniously drench me with several bowls of cool water.

Following the invigorating—if somewhat inelegant—experience, I was wrapped in white towels, including one around my head that made me look like a wintery Cleopatra, and led to an air-conditioned room to sip hot Turkish or apple tea from fluted shot glasses. I reflected on how relaxing and rejuvenating the week had been; ending the trip with the shedding of dead skin was a rather apt note on which to go home.