See the Sights and Enjoy the Arts in Downtown Los Angeles 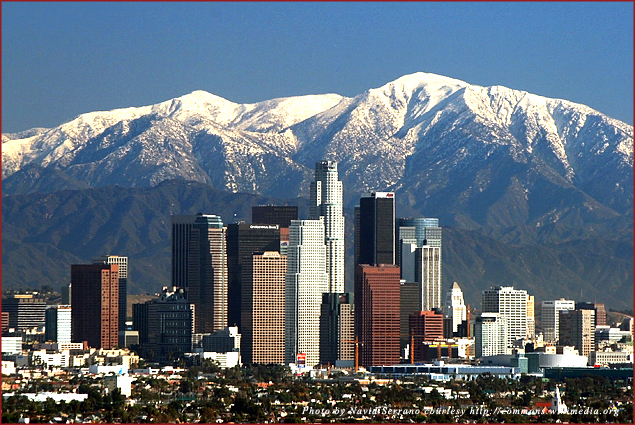 If you don’t think of downtown Los Angeles as a travel destination, you’re missing out – the area has undergone a revitalization in recent years, and is popping with cultural hotspots and a vibrant nightlife. Downtown is also rich with history – visit Chinatown, Little Tokyo, a classic Art Deco train station, and the site of the first European settlement in Los Angeles, all within a couple of blocks. It’s also a perfect base to explore the rest of LA – even without a car. 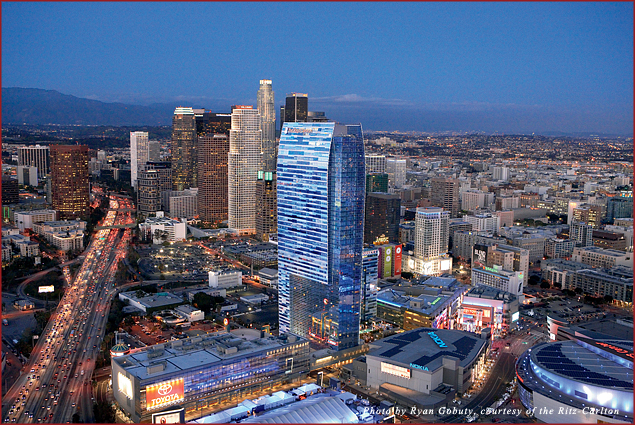 Take the Red Line train to Hollywood and beyond, or the Gold Line to Pasadena.

Take a day – or three – to check out downtown LA. It’s a perfect day trip, but the best way to enjoy all that the area has to offer is to check into a hotel and use it as a home base to explore its many treasures. Downtown LA has hotels for every budget. 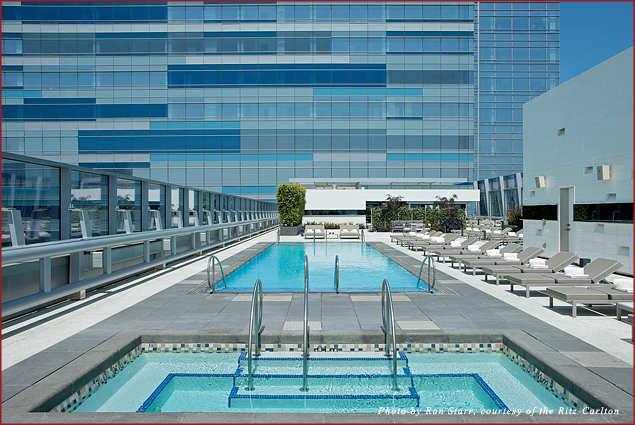 There are several luxury hotels downtown, but the Ritz-Carlton Los Angeles at LA Live is one of the finest. The hotel occupies floors 22 through 26 of a distinctive glass tower at LA Live – billed as Los Angeles’ version of Times Square – and features a rooftop pool and bar and a luxury spa.

The hotel offers 109 guest rooms and 14 luxury suites, including the 3,000-square-foot Ritz-Carlton Suite. The rooms and suites are beautifully appointed and include feather beds and duvets, 400-thread-count linens, plush towels and robes, and flat-screen TVs. 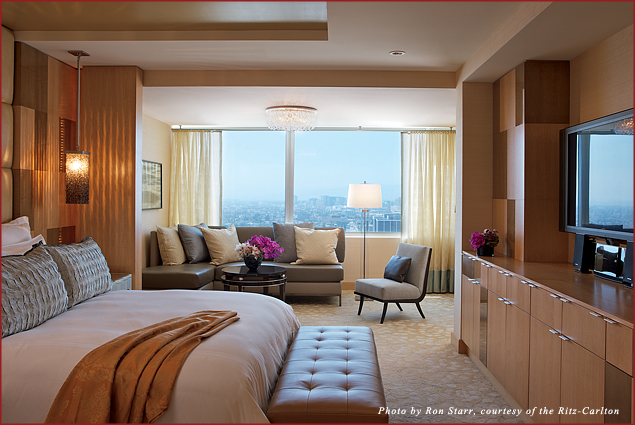 The Ritz-Carlton Los Angeles is known for exquisite service and impeccable attention to detail. From the moment you pull up in front of the glass doors, you’ll receive the full attention of its dedicated staff.

The views are breathtaking from every part of the hotel – the lights of Los Angeles are the glittering backdrop at night, and on clear days the hotel has a magnificent view of the mountains to the north. 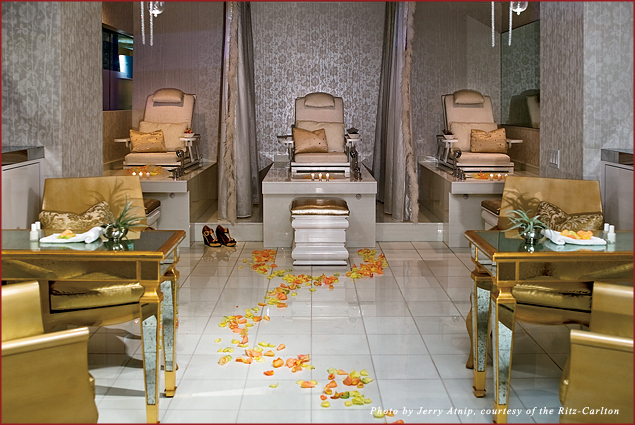 The full-service spa at the Ritz-Carlton is a serene 8,000-square-foot oasis in the heart of the city. Pop in for a quick trip to the steam room and relaxation suite, or indulge in a signature spa treatment such as the Champagne and Shimmer Ultimate Manicure and Pedicure, the Glowing Gold Facial, or the Champagne and Citrus Sugar Scrub. 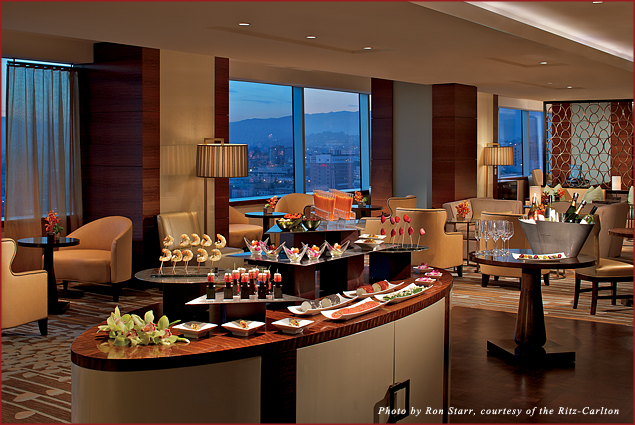 The Club Lounge on the 23rd floor will make you feel like a VIP – it’s a 3,400-square-foot space with a dedicated concierge and panoramic views of the city. The Club Lounge includes complimentary cocktails, beverages, and light food service throughout the day. The sumptuous food, impeccable service, and relaxed atmosphere will make you want to stay all day, but you’ve got things to do – downtown beckons. Here are a few of the things to see and do in downtown LA:

LA Live truly has something for everyone – it’s next to the Staples Center and includes the Nokia Theater, a 7,100-seat concert venue, and Club Nokia, a 2,300-seat venue. It’s also home to the Conga Room, the Grammy Museum, a movie theater, a high-end bowling alley, and bars and restaurants to appeal to every appetite. Nokia Plaza, the 40,000-square-foot open-air space lit by flashing electronic signs, offers some of the best people-watching in LA. 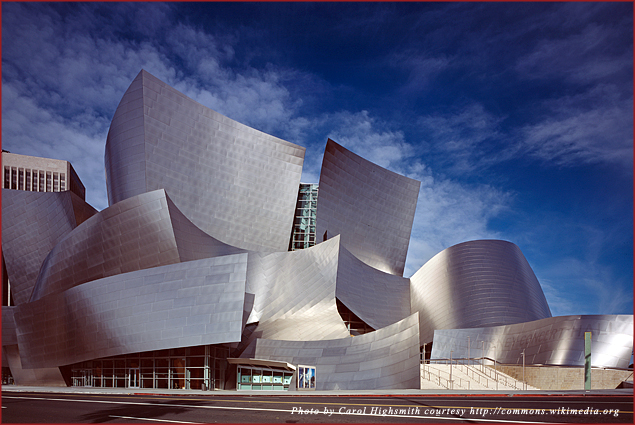 This iconic building designed by architect Frank Gehry opened in 2003. Its curved stainless-steel exterior is a treat for the eyes, and attending a performance in the concert hall – considered one of the most acoustically refined musical venues in the world – is a treat for the ears. Take a tour, or catch a performance of the Los Angeles Philharmonic led by conductor Gustavo Dudamel.

MOCA is the only museum in Los Angeles dedicated exclusively to modern art. It was established in 1979 and now has more than 5,000 pieces in its permanent collection. There are three facilities – on Grand Avenue near the Disney Concert Hall, The Geffen Contemporary in Little Tokyo, and the Pacific Design Center on Melrose a few miles from downtown.

You wouldn’t know it from the concrete and glass urban environment of downtown LA, but it’s where the first Europeans settled in the area in 1781 at El Pueblo de Los Angeles. Stroll down Olvera Street and enjoy its south-of-the-border atmosphere as well as shopping, Mexican food, and museums. 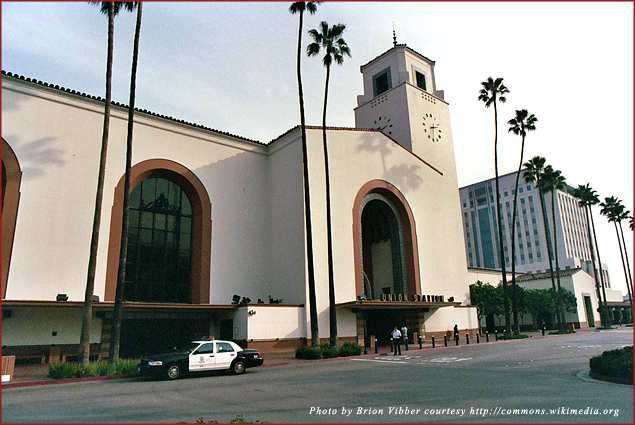 Union Station in downtown Los Angeles is more than just a train station – it’s considered the last of the great railway stations. If its terra cotta floors, inlaid marble, and travertine walls seem familiar, they should – Union Station is the backdrop for countless TV shows and feature films, including Blade Runner. The building is a graceful combination of Mission Revival, Dutch Colonial Revival, and Streamline Moderne styles. 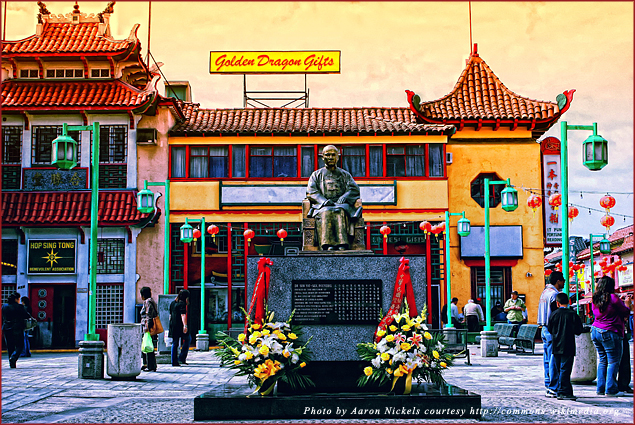 Chinatown is a neighborhood with both a rich history and a vibrant present. It’s a shopping and dining mecca, but there is so much more to see and do there, including galleries, museums, herb shops, acupuncturists, and walking tours. Check out the Chinese American Museum, and take time to wander the area’s many plazas and labyrinth alleys.

The Japanese are integral to the history of California and Los Angeles, and Little Tokyo was once a much larger residential hub. Now it’s a five-block area bordered roughly by First and Third streets to the north and south and Alameda and Los Angeles streets on the east and west.

Like Chinatown, it’s a shopping and dining paradise, and you can also find public gardens, sculpture, and the Japanese American National Museum.