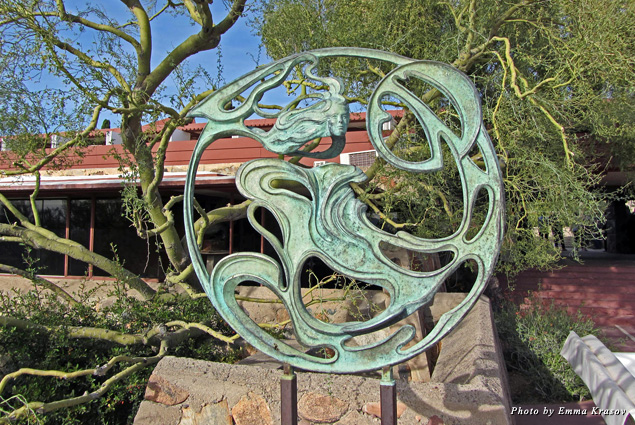 Scottsdale is a strange and beautiful hybrid flower of modern architecture, outrageous culinary treats, and Cactus League Spring Training with accompanying nightlife and wild entertainment—all in bloom as I type. Like a silk moth attracted to the Sonoran desert early blossoms, I flew to Scottsdale to worship my idol, Frank Lloyd Wright, at his Taliesin West but got entangled in a sparkling web of other earthly delights, scattered far and wide all around me. For a small city with about a quarter million population and scarcely a century of recorded history, Scottsdale, Arizona, is remarkably vibrant and rich with things to see and do. Small discoveries wait on every step.

From the slanted golden poles of the porte-cochère and the precious petrified wood pieces by the welcome desk to the WET rooftop swimming pool and the Shade cocktail bar, everything speaks to me, a weary traveler, and invites me to relax, unwind, and forget where and why I am supposed to go. I am at the first W Hotel in Arizona, located in downtown at the corner of Camelback and Scottsdale roads. 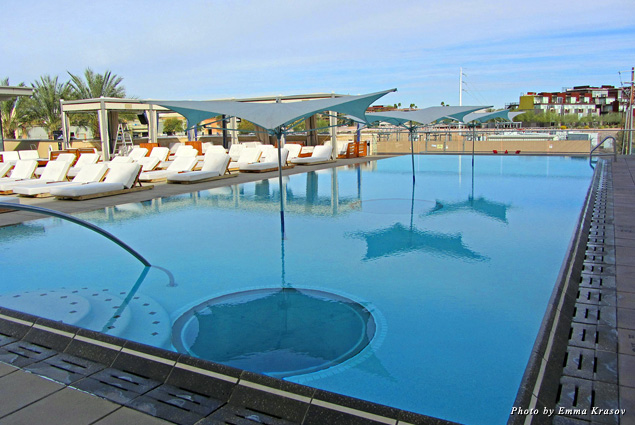 In my Wonderful Room, I check the view of Camelback Mountain from a floor-to-ceiling window, order room service for a quick refuel, and take a catnap on a luxurious bed before embarking on my afternoon adventures. The room looks sparkling clean and new, although the hotel was built several years back, in 2008.

W’s obsession with creative names puzzles me at first when I see a door marked “Talent Only,” but I later discover that “talent” in this case means “staff.” After that I quickly acquaint myself with the helpful Whatever/Whenever concierge service, Fit gym, Wired business center, and PAW, which stands for “pets are welcome.” I almost regret being a cat person and not owning a dog upon learning about W’s signature Yappy Hour and Doga (dog yoga) Social. 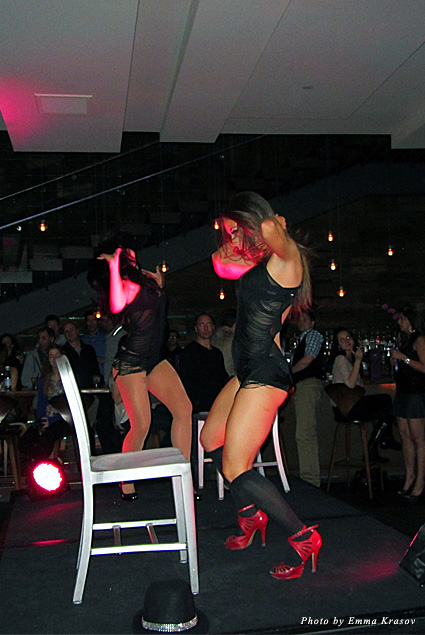 W Living Room, in lesser places known as a hotel lobby, lights up at night, turning into a music venue with guests akin to Kelly James, who comes specifically to perform during Spring Training season. Every Friday and Saturday, local and nationally known musicians entertain the public here, and every Thursday burlesque dancers tantalize the cocktail-sipping crowd with their ancient art of seduction.

Speaking of cocktails, W Scottsdale bar manager Nick Accardo is a master of his trade, creating some mean libations with unusual ingredients, such as George Clooney’s private tequila “Casamigos,” produced by the movie star and his friends Rande Gerber and Mike Meldman.

The Casamigos cocktail, called the Clooney, is only one on the list of Nick’s prized blends, such as my favorite spicy Heart’s on Fire, made of raspberry vodka, fresh jalapenos, fresh raspberries, lime juice, and simple syrup with a sugar rim.

Being smack in the middle of Scottsdale’s shopping, restaurant, and arts district, W is also just a brief walk away from Scottsdale Stadium, the longtime pre-season home of the San Francisco Giants, twice World Series Champions. Nearly 60 years of legendary baseball history comes alive here every March with the arrival of the league’s old teams and their new players.

An Arizona tradition since 1947, Spring Training baseball started back then with just two teams: the Cleveland Indians and the New York Giants. Today, 15 teams train in the Phoenix metropolitan area, including the Giants and the Arizona Diamondbacks.

Even for the fans of the San Diego Padres training in Peoria, the Oakland A’s in Phoenix, or the Chicago Cubs in Mesa, Scottsdale becomes a home base due to its vibrant nightlife. With the W serving as party central, swanky new nightclubs, such as Maya Day and Nightclub or the Mint Ultra Lounge, attract crowds of revelers with their state-of-the-art technological advances in light, music, food, and drink.

A Taste of Old Town Scottsdale

Put together by Destination Food Tours, a walking culinary tour of a small city with hundreds of good restaurants is no small affair. I met with a group of foodies and our guide, Zach Egedy, by the Scottsdale Historical Museum, located in the Little Red Schoolhouse in the heart of the Historic District. 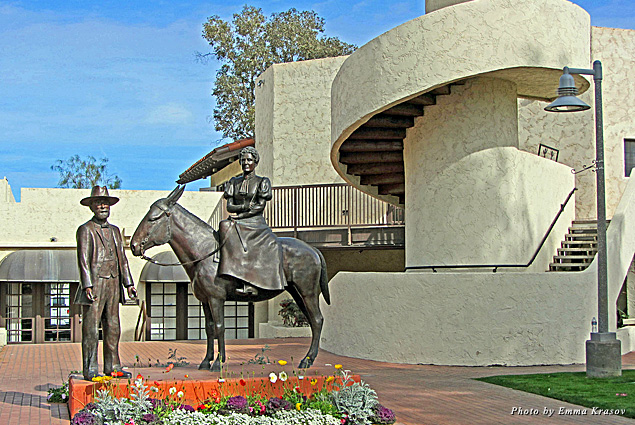 Our guide introduced us to a man behind the glory of Scottsdale, or rather to his bronze sculpture in the middle of the square. Winfield Scott, a United States Army chaplain who founded this blessed city in 1888 and originally called it Orangedale, is depicted holding the reins of his mule, Old Mud. His wife Helen sits on the mule, smiling under the blazing desert sun.

The courageous pioneer woman would surely have more reasons to smile in contemporary Scottsdale, which brims with high-end shopping, artisanal native jewelry shops, about 150 art galleries, and of course small, privately-owned ethnic restaurants that create a unique culinary profile of the Old Town.

On our food tour, we first stopped at The Mission, a new creation of the celebrity chef Matt Carter serving modern Latin cuisine with Spanish, Mexican, Central American, and South American influences. We indulged in skinny margaritas, house-made salsas, and tortillas topped with pulled pork.

Then we proceeded to Rusty Spur Saloon, which dubs itself “Scottsdale’s last real cowboy saloon.” Constructed in 1921, the building housed the Farmer’s State Bank of Scottsdale and opened as Rusty Spur Cafe in 1951; it is currently storing cold beer in a conveniently insulated bank vault. Here we had lunch that felt more like a night at the bar with chilled beer and live country western music.

Our next stop, Grimaldi’s Pizzeria, follows a longtime history of the original New York pizza first produced in Brooklyn in 1912 and baked in a coal-fired brick oven. Our cheese and pepperoni thin crust pie had a definite flavor of authenticity that according to the bearers of Grimaldi family tradition cannot be reproduced on gas or wood.

At Malee’s Thai Bistro, founded in 1987, our group is treated to a fragrant tom ka gai soup with coconut milk and fried spring rolls with house-made sweet and sour sauce.

At AZ88 we enjoy the artsy ambiance and the freshly baked key lime tart redolent of key lime juice.

Also included in our tour is a stop at a specialty shop called Outrageous Olive Oils and Vinegars—a true revelation of what those seemingly simple condiments can do. 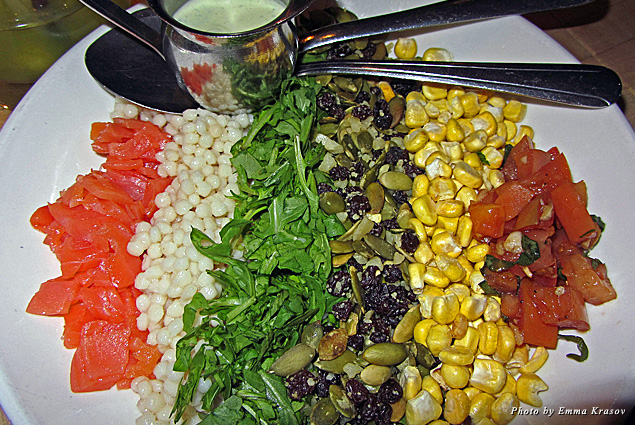 By the end of our food tour I thought I would not be hungry for another week, but that lasted only until I heard about Scottsdale’s most popular gastropub, Citizen Public House. The contemporary take on a traditional public house offers a strong cocktail list and award-winning meat and seafood plates. Everybody’s favorite on the menu is the Original Chopped Salad, made up of neat rows of colorful ingredients that vastly differ in tastes and textures.

Coming to Scottsdale in 1937 for its healing dry air, Frank Lloyd Wright built his winter home and an architectural school, Taliesin West, in the foothills of the McDowell Mountains among pale saguaro cacti and dusty-green palo verde trees. Using uneven boulders from the Sonoran desert (delivered by hand by his loyal apprentices) and creating lots of his favorite triangular forms in ocher and burnt sienna, he tried to mimic the outlines and colors of the surrounding ranges and planes—austere but hauntingly beautiful for a true nature lover. 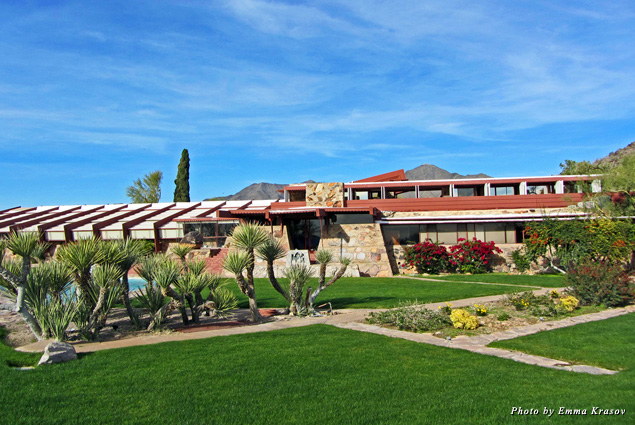 Currently a National Historic Landmark, Taliesin West preserves the architect’s studio, canvas-shielded for even lighting; a theater, where the small community of his students performed their own plays and musicals; a living room, with every detail of furnishings and décor designed by Wright; and private quarters with kitchen and bedrooms restored to their likenesses from 1959, the year Wright died. Set on 600 acres, the stark structures of Taliesin West made of stone, glass, and copper and interspersed with aquamarine pools, sparkling fountains, and dramatic sculptures retain their original charm, attracting visitors from around the globe. To live the legacy, I took a guided Insights tour—one of the many available daily—and spent two hours in sheer reverie listening to our knowledgeable guide talking about the genius architect.