Saratoga, California: A Jewel of a City 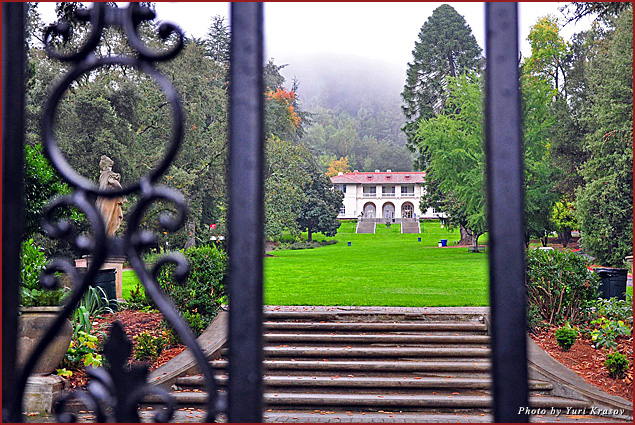 The city of Saratoga, found in the vicinity of Silicon Valley, is not your typical high-tech hub with drafty office buildings and organic fast food joints for lunching pros. In fact, it is not a high-tech hub at all. Saratoga is not an industrial valley town but rather a romantic, hilly retreat surrounded by mossy oak groves and glossy vineyards that turn from emerald to gold on the brink of winter. And when it comes to food be prepared to enjoy it as slowly as possible; the food, as well as the wine, is exceptionally good in Saratoga.

Hardly an hour drive away from San Francisco, Saratoga is a little-known weekend travel destination where all the major attractions are located within walking distance from one another along Big Basin Way. Plus, it is a pleasure to take short rides to more remote sites because of the amazing beauty of the verdant mountainous surroundings.

On our weekend trip to Saratoga my husband and I started at Villa Montalvo which was built in 1912 by the then US Sen. and San Francisco Mayor James Duval Phelan. Phelan built his summer residence in an Italian style suitable for the Mediterranean climate of California and surrounded the two-story airy building with gardens, lawns, flowerbeds, and even an outdoor theater.

Senator Phelan named his villa after Garci Ordonez de Montalvo, a Spanish novelist of the 16th century who was the first to use the word “California” in his fantastical fiction. To Montalvo, California was a paradise island populated by Amazons who rode gryphons and guarded their countless treasures. To Phelan, American California was a Spaniard’s dream come true and an incarnation of the terrestrial paradise he envisioned. The patriotic senator even wrote a poem and had it inscribed on his patio wall; the poem states, “…her name foretold, her gold a paradise for eager eyes. His dream came true for me and you.”

There is plenty to see with eager eyes at Villa Montalvo. Free and open to the public, the entrance to the site is at the end of a winding forest road adorned with contemporary art pieces from the resident Montalvo Arts Center. A great green lawn in front of the villa serves as a community picnic ground, at the foot of which lies the Italianate Garden surrounded by pyramidal Tuscan cypresses and rose bushes.

In the garden, there is an exquisitely preserved white marble statue depicting Adam and Eve, which Senator Phelan brought from Italy. 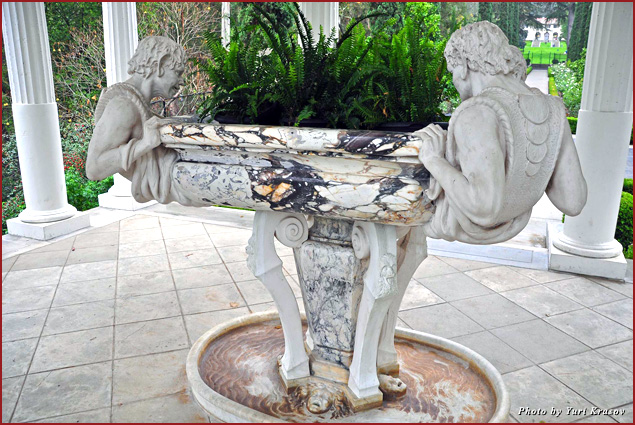 The garden also features a white-columned Love Temple, with a strange sculpture—formerly a fountain—in its center. The sculpture is a rectangular, colored marble basin that has been turned into a planter and is surrounded on four corners by macabre-looking satyrs who peer inside with their tongues stuck out. Underneath, a shallow fountain bed has a wave pattern and four distorted faces looking up from under the waves. Dumbfounded, I circled the construction trying to connect the dots. With the kind help from the Montalvo Arts Center’s historians I learned about the Love Temple’s fascinating history. 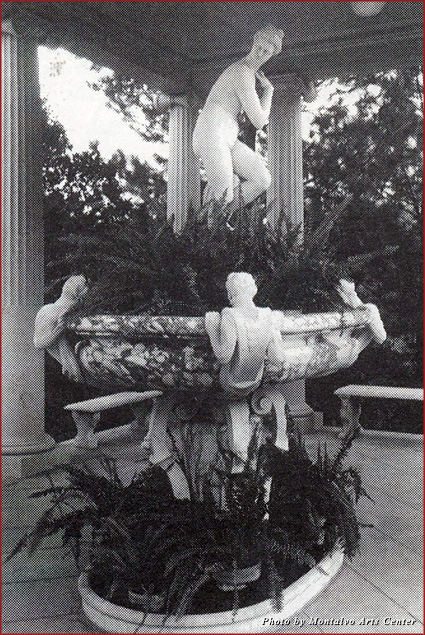 According to the experts, the decorative motif of the Love Temple once revolved around the Roman goddess Venus, whose statue stood in the center of the fountain. Below her were the faces of the four winds that blew Venus to shore after her birth. The original satyrs around the fountain were destroyed during the 1989 earthquake and replaced with the “much more ghoulish looking” versions on view today. By 1925, as shown in a dated historical photo, the fountain had been converted into a planter. At some point during the 1940s, the Venus statue was vandalized and removed (as was, unfortunately, much of the statuary on the grounds during that period).

In 1930, before he passed away, Senator Phelan left Villa Montalvo to the San Francisco Art Association as a charitable trust “to be used as far as possible for the development of art, literature, music, and architecture.” Today, according to his wishes, the Montalvo Arts Center implements a variety of public programs including musical and theatrical performances, visual arts exhibitions, artists’ residency, lectures, classes, and literary events. 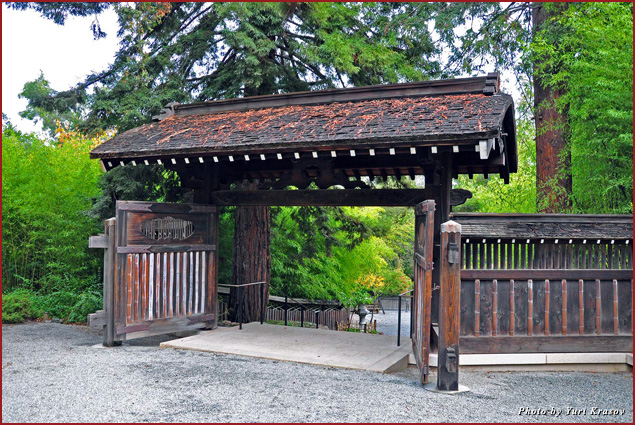 Our next stop was Hakone Estate & Gardens, which was established in 1917 by San Francisco arts patrons Oliver and Isabel Stine, making it the oldest Japanese garden in the Western Hemisphere. Designed by a descendent of the imperial gardening family and spread over 18 acres of mountainside covered with bamboo, red maple, and black pine, Hakone is a replica of Japanese samurai or shogun’s estate gardens where rocks, plants, ponds, and bridges are arranged in heavenly harmony.

Structures such as the Upper House, also known as the Moonviewing House, on a hill above the Moon Bridge and koi pond are built for quiet contemplation, Zen meditation, and tea ceremonies. In the layout and architecture of Hakone it is easy to see the difference between the Western attitude toward nature, one of conquest and domination, and the Eastern desire to blend with nature and appreciate everything that surrounds us. Stone lanterns next to gray stones, bamboo banisters in a bamboo grove, and wisteria blossoms hanging from an arbor made of dry wisteria trunks … everything here looks like part of a landscape, with the exception of the ancient colorful koi in the pond. 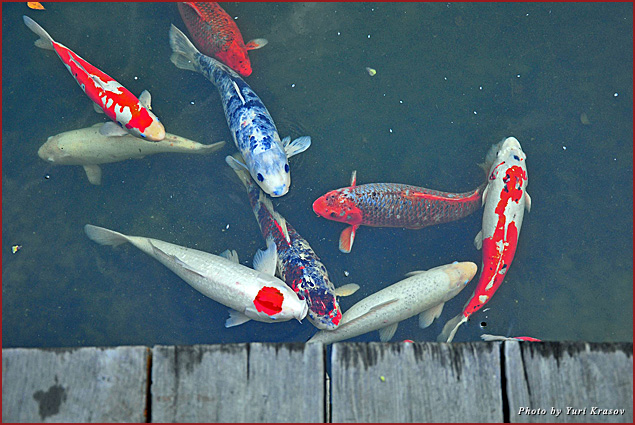 One fish looks like a blue-and-white Japanese porcelain vase, another like a silk kimono sleeve. The third one looks like the flag of Japan with a red round symbol of the rising sun upon its white head.

One of the prime landmarks by the National Trust for Historic Preservation, Hakone was a film site for the 2005 movie Memoirs of a Geisha. The estate and gardens continue to host multiple international, historical, and cultural events.

After an eventful and educational morning, we lunched at Bella Saratoga, an Italian restaurant located in a beautiful Victorian house. Bella Saratoga serves fresh California produce and seafood and is a favorite place for local, romantic dining. We felt very refreshed after consuming delectable bruschetta, polenta, and Caprese.

Our route next led us to Mountain Winery, founded in 1905 by Paul Masson, a famous French winemaker who is considered a father of California champagne. His name is still inscribed on the giant wine barrels that decorate the property. Excellent Chardonnay and Pinot noir produced here follow Masson’s original choice of grapes, but they are not the only attraction at the winery. 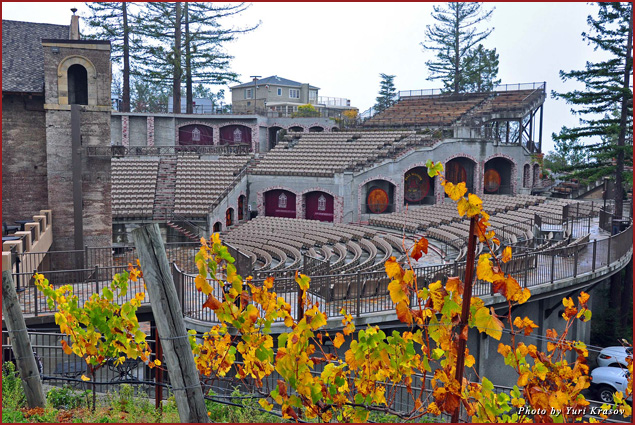 A major tourist destination, Mountain Winery boasts unparalleled views of the surrounding hills (and the San-Francisco skyline on a clear day) and hosts a world-famous seasonal concert series. Over the years, a hillside amphitheater built in 1958 has welcomed performers including Diana Ross, the Beach Boys, Donna Summer, Ray Charles, B.B. King, and Willie Nelson.

Inspired by the beauty of this place, celebrity photographer Ansel Adams once worked at Mountain Winery, and some of his artwork is on view today on the walls of an elegantly appointed tasting room inside the main building.

After all the walking on the Saratoga hills, we looked forward to our massage appointments at the award-winning Preston Wynne Spa, known for its skilled personnel and serene relaxing ambiance. Every masseuse at Preston Wynne is an expert in a particular kind of treatment so the list of services is long and varied and includes everything from an organic sugar scrub and detoxifying sea mineral wrap to a rose oil massage and warm seaweed back pack. Peggy Wynn Borgman, the spa founder, wrote a book titled “Four Seasons of Inner and Outer Beauty” dedicated to the rituals and recipes for well-being throughout the year. 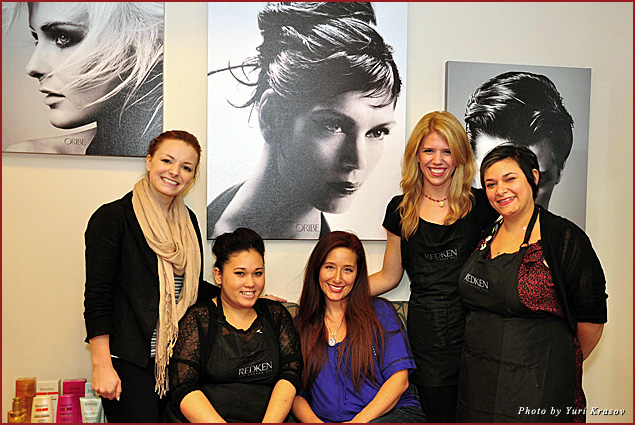 The hair salon next door, James Craig Hair Color & Design, impressed me with its friendly staff and the best scalp treatment and blowout I had in years. On a busy weekend afternoon, the salon’s youthful and efficient team of workers found the time to exchange jokes with the customers while transforming and improving their appearances.

Feeling beautiful and energized, I didn’t mind visiting more places and acquainting myself further with the city of Saratoga. At Cooper Garrod Estate Vineyard we tried some wonderful Viognier, Cabernet Franc, and signature Test Pilot blends from the estate grapes. We also took a good look at the gorgeous riding horses and ponies from the Garrod Farms Riding Stables.

At Cinnabar Winery we celebrated new releases of 2011 Grenach from Paso Robles, 2010 Tempranillo from Lodi, and 2009 Malbec from Clear Lake with the Alchemist Wine Society. We then ventured to Saratoga Chocolates where we enjoyed delicate truffles flavored with espresso and Kahlua, lime and mint, and cinnamon and cayenne. At Deja and Co Exquisite Jewels we got an eyeful of designer gems and a glass of champagne, which was offered to the shopping public on a weekend night.

Finally, by dinnertime, we walked to the Plumed Horse restaurant where chef/owner Peter Armellino tirelessly wows patrons with his outstanding creativity and sophistication. Our tasting menu began with a fresh tuna tartar topped with brioche toast, quail egg yolk, and black caviar, followed by a miniature presentation of black pepper and Parmesan soufflé and uni and Dungeness crab fondue. 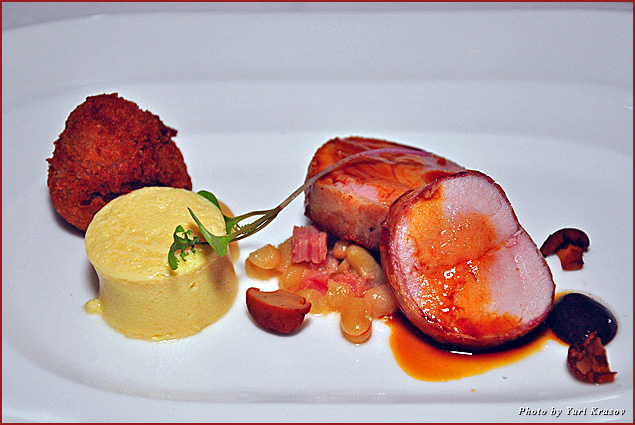 Rabbit loin, wrapped in bacon, was garnished with silky Gruyere and onion flan, while an antelope sausage came in a company of sweet potato puree and wheat berries. Pear sorbet with pomegranate seeds arrived before dessert to cleanse the palate. For a sweet finale, chocolate mousse shared a plate with whipped crème fraîche, port gelée drops, and coffee nibs. 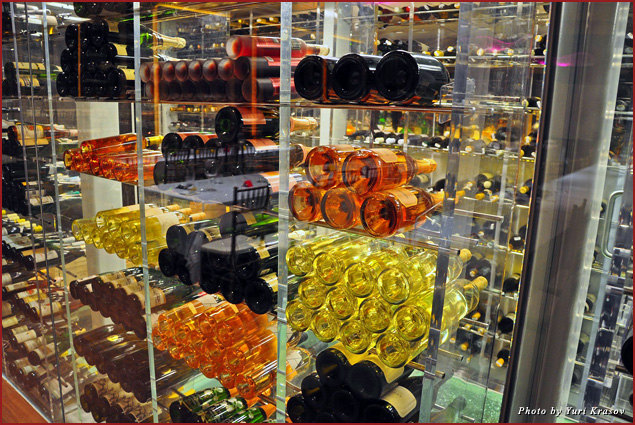 Our lavish feast was paired with delicate wines from the restaurant’s glass-walled wine cellar.

When we finished our state-of-the-art meal, it was dark and rather late. Good that our hotel, Saratoga Oaks Lodge, was just steps away from the restaurant on the same main drag as everything else in this blessed city. 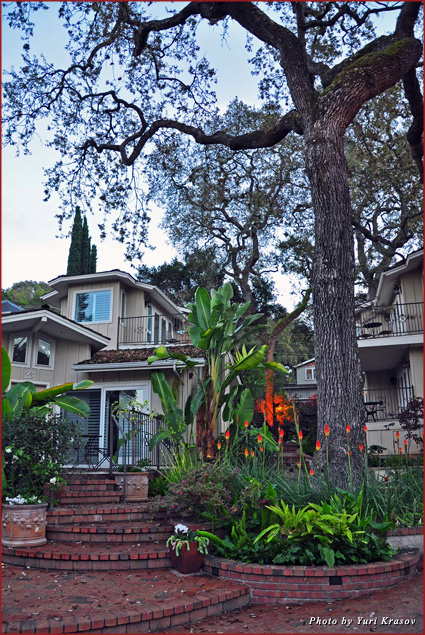 At the lodge, cozy cottages with all the modern conveniences snuggly nestled under century-old oaks formed a little quiet zone around a flowering courtyard. A living room with a fireplace, a kitchenette with a coffeemaker, and a very comfortable bed provided a good night sleep. In the morning, we picked up our freshly brewed coffee and pastries and fruit from the office and took our sweet time at breakfast on a terrace surrounded by potted banana plants and tropical flowers.