Santa Barbara—So Much to Do, So Little Time… 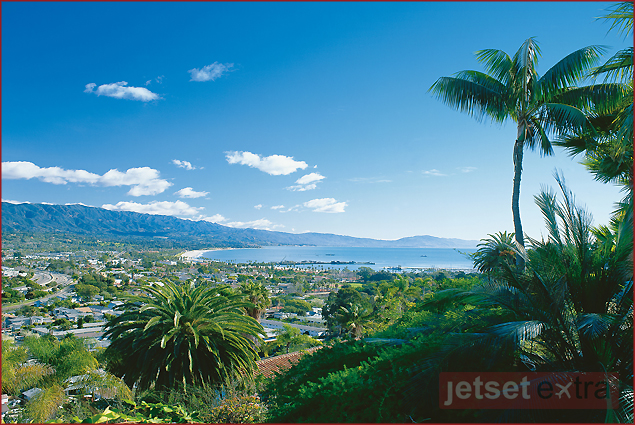 Santa Barbara, California, is known as the American Riviera. It’s only 90 minutes north of Los Angeles, but it feels like another world. It is the best place to get away, relax, and have fun with friends or that special someone.

Be sure to check out the extended Santa Barbara photo gallery

I had four days to attend the 26th Annual Santa Barbara International Film Festival and capture all the different things to do in Santa Barbara. Deciding what to cover was difficult, and my time there was limited, so I thought long and hard about what you would want to see vs. what you probably already know about. There are a million and one things to do in Santa Barbara, such as go wine tasting, see shows, hike along the Urban Wine Trail, go horseback riding or sailing along the beautiful coastline, view films at the annual Santa Barbara International Film Festival, and eat at any one of the great restaurants in town. I packed in as much as I could without killing the crew. Here is a taste of some of the great things we did and the people we met along the way. Don’t forget, if you go to any of the places we visited, mention that you saw them on Jetset Extra.

The Canary Hotel is at Carrillo and State streets, right in the middle of some great shopping and restaurants. This hotel is very simple on the outside, but its 97 rooms and suites are beautifully decorated – you’ll feel like you’re right at home. We were lucky enough to have a sit-down chat with General Manager Laura McIver. She told us all about the hotel and mentioned a few of her more well-known guests. She also told us about the great parties they host in their bar as well as what she likes to do around town. 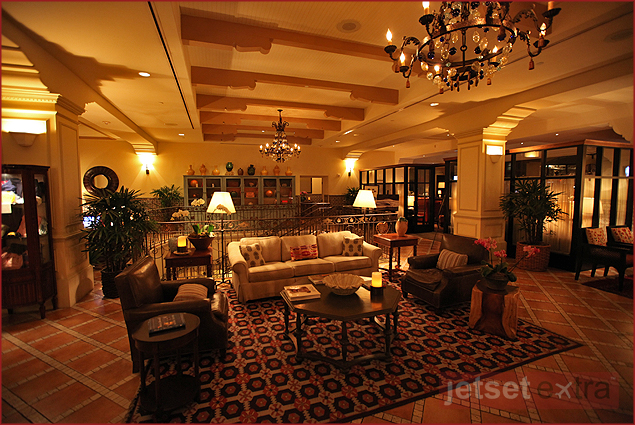 The Canary has a very special feature – The Perch. This rooftop spot is the ideal location for weddings or for lounging by the pool and enjoying 360-degree views spanning from the mountains to the Pacific Ocean. It’s also great for you early birds to watch the sunrise, or romantic couples who like to smooch while the sun sets.

In Depth: Read our full review of the Canary Hotel

WHERE WE ATE:
You will never starve in Santa Barbara – there are so many restaurants to choose from. You can go to Andersen’s Bakery for fresh pastries or Tupelo Junction ffor an amazing brunch. Any one of the restaurants along State Street is suitable for lunch or dinner. We decided to take a couple of side trips off State Street and visit two of the many great restaurants in town. First we headed down Cota Street to meet Gabi Barysch-Crosbie, owner of the Blue Agave Restaurant and Tequila Bar. The Blue Agave specializes in Oaxacan-style food and beautiful smoky mescal. You will not want to miss this place. Her chicken molé enchiladas were so delicious I wanted to lick the plate. The molé was dark, rich, and layered with some incredible flavors. This is the thing to order when eating here. 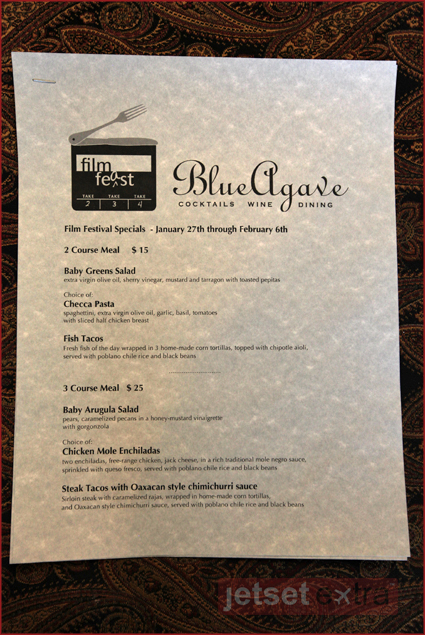 I had a crew of hungry people with me, so I was always thinking about the next place to eat. We headed to Seagrass on Ortega Street, where chef/owner Robért Perez talked with us about his restaurant, his family, and his food. Later that night we went back for dinner, and we have the pictures to prove it. The thing to order here is the Ahi Dog. This is one of those things you won’t want to miss. Think sushi on a stick, but with style. It’s an ahi sushi roll battered with cornmeal batter and deep-fried. Delish! 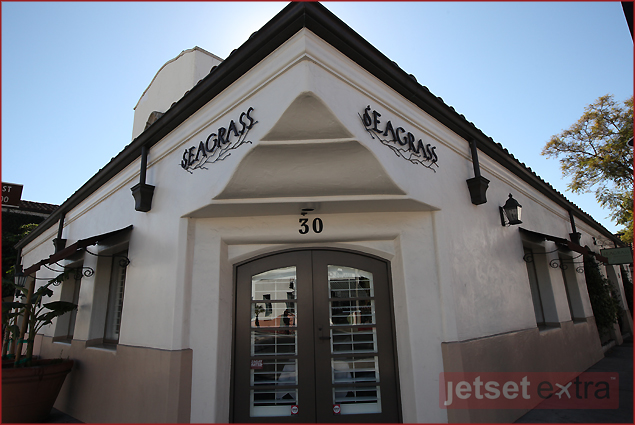 Gabi and Robért are affiliated with the Santa Barbara International Film Festival’s Film Feast. Participating restaurants create menus designed to get film buffs fed and out to their next film viewing. It is a great way for people attending the film festival to delicious food and still be a part of the festival. If you’re visiting Santa Barbara in January, be sure to plan your trip around the film festival. 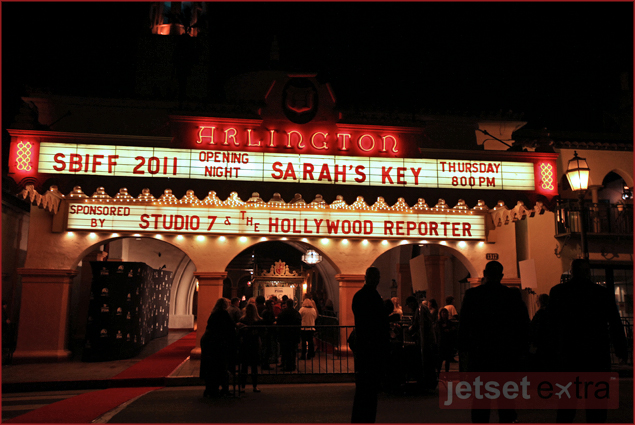 WHAT WE DID:
The 26th Annual Santa Barbara Film Festival
Every year, the Santa Barbara International Film Festival draws crowds that include Hollywood celebrities, producers, directors, indie film people, and their fans. We were lucky enough to attend the festival and participate in awards shows, red-carpet events, and many of the screenings of the 200 different films being shown throughout the 11-day festival.

Sunset Kidd Sailing Tour
Sailing is one of those things that you either love or like. If you love to sail, you are on the water as much as possible and could very well own your own boat. If you like sailing, you do what we did – you find someone with a boat who is willing to take you out on it. We met up with Captain Dennis of Sunset Kidd Sailing for a very romantic sunset sail. Captain Dennis loves sailing and has been doing it since he was 9 years old. He has encountered some very exciting weather in all the different boats he has owned through his life. Rest assured, you are in good hands when sailing with Captain Dennis. 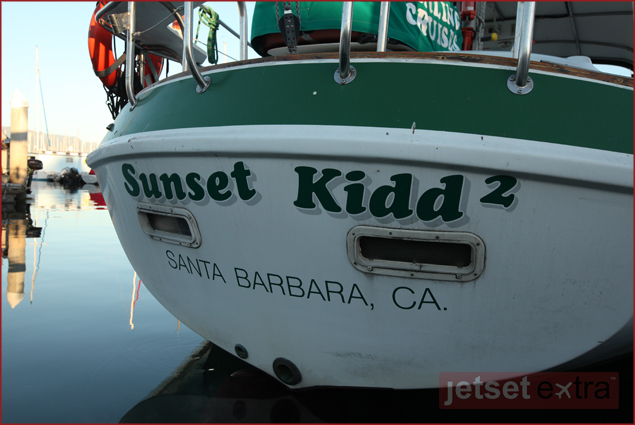 Sunset Kidd Sailing is a tour company that will take you and your guests on an excursion through the relatively calm waters of the Santa Barbara coast. You can see whales, dolphins, sea lions, seals, and if you are really lucky and single, you may see the very elusive Tiffany diamond. Yes ladies, if your guy is romantic at all, he will plan to take you out on a sunset cocktail cruise and propose. It happens all the time…

You will never have the same experience twice, as the water is always different and will determine how your trip goes. Sailing the scenic Santa Barbara coastline is incredible. Spending the day out on the water with Captain Dennis is something you don’t want to miss.

Circle Bar B Ranch:
Family and fun is the name of the game at Circle Bar B. We had a great day horseback riding and getting to know the gang at the ranch.

The leader of the pack is Jim Brown, owner of Circle Bar B. Jim, who is a fountain of knowledge about the ranch, sat down with us in the very same spot he and his lovely wife were wed. We were given a very colorful history lesson about his family and how the ranch has become what it is today.

Next in the lineup is Kathy (the jack of all trades) and her brother Pat. They run all of the day to-day business at the ranch. Kathy took some time out of her very busy day to tell us all about the amenities they offer to their guests.

Then there is Jack, the stable manager. Jack will entertain you while you are waiting for your ride to begin with great conversation and hilarious stories about being a cowboy. When you are mounted atop your horse, you will be led on your ride by one of the cowboys on staff at the ranch. If you remember, ask for Skinner! He is a real honest-to-goodness cowboy. Once you are up at Lookout Point, you will realize why they do this for a living. You can see from the mountains to the ocean. What a great day!