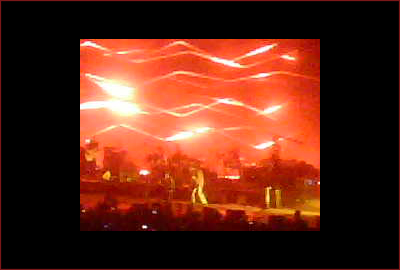 The Santa Barbara Bowl’s 2010 season is off to a rocking good start.

I was one of the lucky 4,565 Thom Yorke fans to have a ticket for his sold-out Atoms for Peace gig at the Santa Barbara Bowl, last Saturday. Ah-mazing! I can’t gush enough about how spectacular of a venue the Bowl is for live music, or how crazy talented Thom Yorke is, for that matter. (My friend Russ Spencer produced a documentary “Backstage at the Bowl” that captures the essence of the Bowl’s fabulousness perfectly, through interviews with artists who performed during the 2004 season.) And 4/17 was no exception. Fans—some who traveled from as far away as New York—definitely got their money and air miles worth! And were probably surprised at how easy the concert-going process is in Santa Barbara—the perks of small town living!

The Bowl is our rock Mecca, but we have some other outstanding venues for live music that set the stage for memorable performances year round. They all share a unique sense of place and have this same “easy-going” no hassles/parking headaches/long lines thing going for them.

If the Bowl is the “king” then The Granada is the “queen.” The elegantly restored historic theatre is the tallest building in town at eight stories, having survived the 1925 earthquake that leveled many structures. Since reopening in 2008 , after its multi-million dollar makeover, The Granada’s become Santa Barbara’s performing arts hub and home of the Santa Barbara Symphony, Opera Santa Barbara, State Street Ballet and many other local performing arts groups, as well as hosting touring artists and productions. The Granada takes on a completely different feel with every act. My favorite show so far was Monsters of Folk, which felt so perfectly intimate, lush and rich, in the 1,550 capacity theatre.

Just a block away from The Granada, The Arlington Theatre is also a visual delight, with a star-lit ceiling and mural-adorned walls. The major Santa Barbara International Film Festival events and screenings take place here, and UCSB’s Arts & Lectures series frequently holds events at the picturesque theatre. I’ve seen many rock shows here but my favorite stands as Eddie Vedder , when he was touring for his “Into the Wild” soundtrack album. I was sitting in the front row of the upper balcony, a heavenly perch from which to soak up the sounds of a modern rock god!

The Lobero Theatre is one of our smaller historic venues. Trivia buffs out there will appreciate this fact: the Lobero is California’s longest continually operating theater, dating back to 1873! Sings Like Hell is just one of the very cool local series based at the Lobero. I was completely charmed by Justin Townes Earle, who made a fan out of me when he came through in 2009 for a Sings Like Hell show.

I can’t leave SOhO out of the mix when raving about Santa Barbara’s live music venues. The restaurant and music club has live music nearly every night. And while it’s not historic or noteworthy in any design sense, it’s a winning venue to see a show. Talk about intimate. They showcase a mix of local bands and traveling acts. My personal highlights include Cat Power and Pinback.

So for you music fans out there, take note when your favorite bands and singers put Santa Barbara on their touring schedule, because it’s so worth the trip. And the locals will be kind to you- we’re a friendly bunch!