Russian to the Core, Onegin Opens 2012 Season at SF Ballet 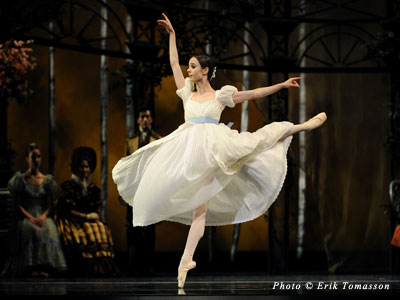 A love story where love does not conquer all, where lovers are not reunited for a happy ending, is so Russian – isn’t it? The pain, the suffering, the moral dilemma inevitably resolved in favor of self-sacrifice – isn’t that what makes the mysterious Russian soul so irresistible?

In the great Russian poet Alexander Pushkin’s 1833 novel in verse, Yevgeny (Eugene) Onegin, the protagonist is not exactly taken with the heroine, Tatiana Larina. At least, not at the outset of the story.

Immersed in romance novel reading, Tatiana longs for eternal love, but her youthful longing is wasted on “the superfluous man” – a beloved character of Russian writers of the period – rich, idle, bored, and overwhelmed by the matrimonial demands of the society matrons trying to set up their daughters.

It doesn’t change a thing that the deadbeat bachelor’s story unfolds between his teenage and early twenties years. 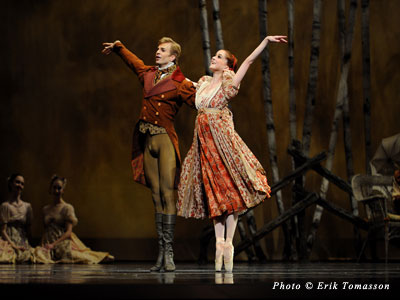 Olga Larina, her sister’s opposite, animated and high-spirited, is happily in love with Lensky, a young poet, whose outlook on life is much more wholesome and romanticized than that of his friend, Onegin.

The inevitable conflict between the opposites moves the story in verse, but what about the dance?

What is a choreographer’s challenge in conveying a story ridden with subdued passions, suppressed outbursts, inner tumult, and hidden drama?

Tchaikovsky’s music definitely helps, but the original composer’s “Yevgeny Onegin” was a classic opera, with its own inner mechanism of story and character development. Only parts of the opera music are used it the ballet, supplemented by fragments from other Tchikovsky’s pieces, arranged and orchestrated by conductor Kurt-Heinz Stolze at choreographer John Cranko’s request. 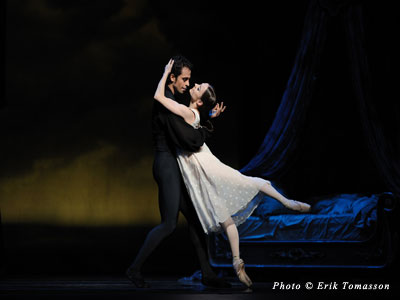 Cranko’s “Onegin,” originally staged in 1965, and premiering now at San Francisco Ballet, is driven by subtle yet extremely complex moves, like in Tatiana (Maria Kochetkova) and Onegin’s (Vitor Luiz) pas de deux in Tatiana’s dream; in a mind-boggling sequence of soloists’ grands jetes led by a fiery duo of Lensky (Gennadi Nedvigin) and Olga (Clara Blanco), or in the fascinating scene of the duel involving all four principals – Tatiana and Olga pleading with Lensky before the duel, Onegin an Lensky exchanging shots, Tatiana and Olga mourning. 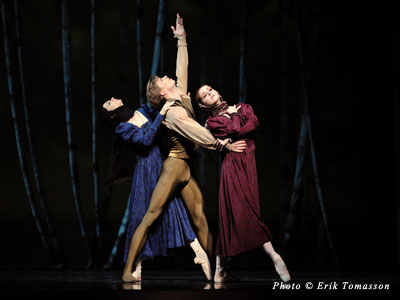 In between these sunburst moments there might be the slowness of action and not much theatrical excitement, but all in all Onegin is a thing of beauty.

Staged by Reid Anderson and Jane Bourne, with scenic design (touchingly using “Tatyana’s letter” in Pushkin’s handwriting) and costumes by Santo Loquasto, and lighting design by James F. Ingalls, “Onegin,” which opens the 2012 repertory season, is conducted by Martin West.

More information and the upcoming shows’ ticketing at their website.