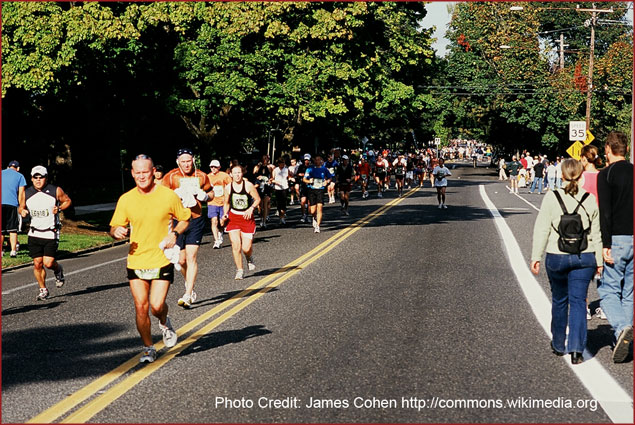 When Chris and I were training for the Portland Marathon in 2008, we quickly realized that Portland is a runner’s paradise. Oregon is oft-considered the distance-running capital of the country and the Portland area is home to Team Nike. This makes PDX a top-to-bottom running haven where you’ll as easily see world class athletes-in-training as motivated morning stroller-joggers.

Now, just because I mentioned a marathon does not mean we are hard-core runners. In fact, the opposite is true. We are hardly ever “in training”, and most often prefer short jaunts in the woods. However, when we moved to Portland in late 2007, Chris thought that training for the marathon would help us become better acquainted with the city. As is often the case, he was right.

The most accessible place to run in Portland is along the riverfront. On the West side of the Willamette is Tom McCall Park, where many of the city’s festivals are held, President Obama spoke when he was campaigning, and the marathon starts. The East side of the river is known as the Springwater Corridor. The paved trail runs from the downtown core 21 miles east into rural areas, ending in (aptly named?) Boring, Oregon (much further than we’ve ever explored on foot). The Willamette is crisscrossed with bridges, but the easiest for foot traffic are the Steel, the Hawthorne, and the Sellwood Bridge. Choosing which bridge to cross is best done depending on the desired length of run. A loop from the Sellwood Bridge to the Hawthorne is about nine miles, while the Hawthorne to the Steel is a much more manageable three.

One of the most wonderful parts of running along these paved pathways is the amenities. There are many water fountains and public restrooms, all in good repair, dotted along the course. There’s never a need to carry your own water, which always seems to throw me off balance. And we all know that running can shake things loose along the digestive tract. While these facilities are nice, the flatness of the course may be some peoples’ favorite part. However, I’d have to say that the very best thing is the view. Almost the entirety of the run is within view of the Willamette River and the path is often near or surrounded by trees as well.

Portland is quite a pretty place to live and it’s glorious to be able to run through its beauty with such ease.