Riding Dragons and Shooting Zombies at Pier 39 in San Francisco 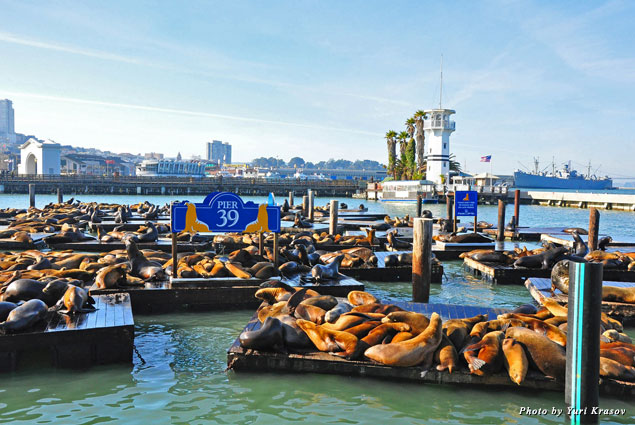 A long-kept secret is out: There are more locals than foreigners on Pier 39, a notorious tourist attraction boasting a number of iconic San Francisco landmarks, from historic seafood restaurants to resident sea lions.

The latest statistics show that 20 percent of visitors live in San Francisco and another 32 percent live in the greater Bay Area and California, so if you are one of them don’t be embarrassed by your longing for the many wonderful things on Pier 39. A weekend here can be quite amusing, not to mention delicious, even for those who won’t admit it’s a pure pleasure to feel like a tourist in your own city.

Arriving on a Saturday morning, my husband and I had lunch at Pier Market Seafood Restaurant. The restaurant has been serving fresh seafood for the last 30 years and has an award-winning clam chowder and mesquite grill and an impressive list of local California wines. 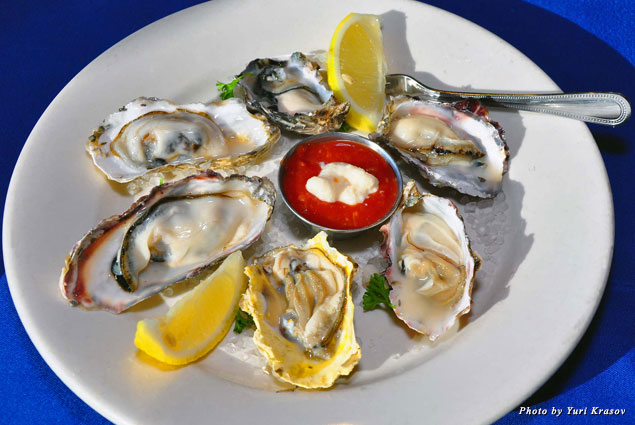 Freshly shucked oysters on the half-shell are simply served with lemon and seafood cocktail sauce with horseradish. And as every oyster lover knows, it’s the best way to consume those slippery bivalves.

Crab cocktail here is a real thing, too. White and coral-colored flakes of sweet Dungeness crab are piled up atop a lettuce leaf, as fresh, local, and seasonal as can be.

Stuffed to the gills, we couldn’t resist a house-made apple crisp—hot from the oven with caramel sauce and whipped cream—before we started exploring the pier for real. 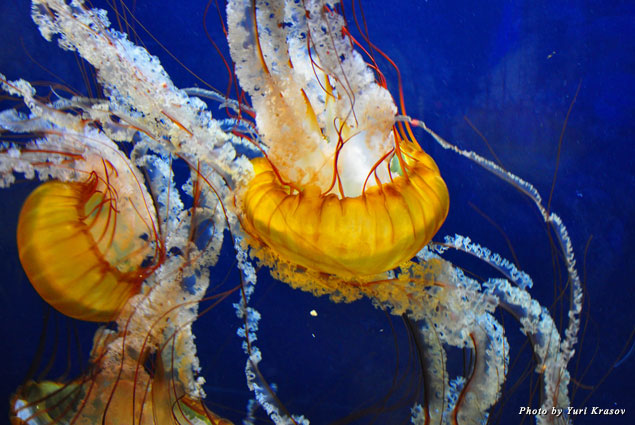 Among the attributes that make Pier 39 a world-class destination and the 13th most visited place on the planet are Aquarium of the Bay, two levels of boisterous boutique shops, street magicians, and musicians, and its close proximity to the recently re-opened Exploratorium, Blue & Gold Fleet bay cruises, rides on the Rocket Boat, and trips to Alcatraz Island.

Located at the water’s edge, the aquarium showcases 20,000 fascinating local bay dwellers. Multiple closed and open displays bring up close the amazing marine life beneath the surface of the San Francisco Bay and along its sandy shores. Sharks, bat rays, and sturgeons swim overhead in glass tunnels between the Octopus Exhibit and the Jellies Exhibit. Sea cucumbers and starfish populate the Touch Pool. River otters play hide and seek in and out of the water. Alcatraz and the Golden Gate Bridge views open up from the outdoor decks. 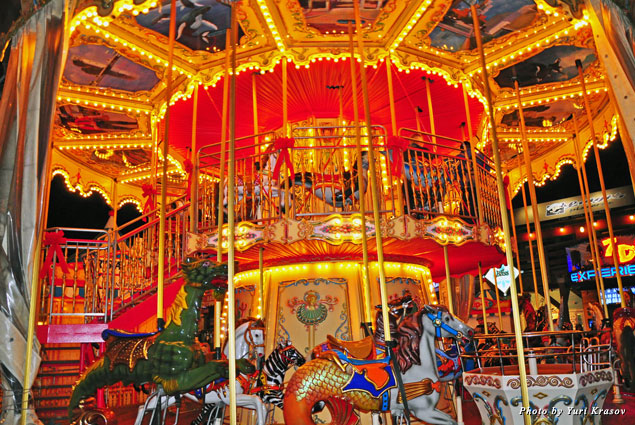 My personal recently discovered favorites are the San Francisco Carousel and the 7D Experience by the bay end of the pier.

Masterfully handcrafted in Italy, the carousel is painted in brilliant colors with the images of San Francisco icons—the Golden Gate Bridge, Coit Tower, Chinatown, Lombard Street, Alcatraz, and a colony of California sea lions at Pier 39. It is the only carousel that has artistic renderings of the city. Adorned with twinkling lights, the carousel features 32 riding animals ranging from horses and zebras to sea lions, dolphins, panda bears, and dragons.

Being a little more mature than the majority of carousel riders, brought in by their parents and grandparents, I nevertheless thoroughly enjoyed the ride accompanied by traditional organ music and the flashing images of Pier 39 promenade bustling with life.

The 7D Experience nearby combines the thrill of a rollercoaster and the excitement of a laser-blasting video game on a movie screen aided by the newest 3D technology, which creates a feeling of driving on a rainy night along a bumpy road, losing gravity while falling into a chasm, or flying through the air. The players, wearing 3D glasses and firing their weapons, compete in a variety of scenarios, such as defeating menacing robots in a Southwestern desert or shooting out zombies in a haunted cemetery. I was having so much fun falling, flying, and shooting that I still can’t understand how I could possibly be behind some 6 year olds in a final score! 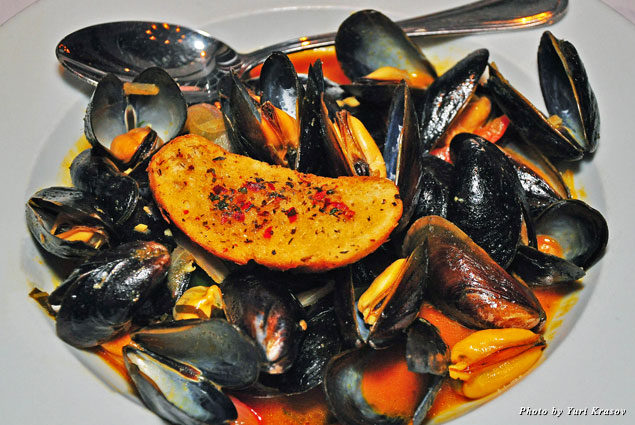 After a day of Pier adventures, we sat down to dinner at Fog Harbor Fish House Restaurant.

“Every meal served with a side of Golden Gate Bridge,” reads its slogan, and this is true. Gorgeous views of the bay are only rivaled by Fog Harbor signature cocktails, such as organic agave margarita, and a 100-percent sustainable seafood menu based on recommendations by the Monterey Bay Aquarium Seafood Watch Program.

Red curry steamed mussels in a coconut broth are a hit here, spiced up with garlic, onion, peppers, and herbs.

Fresh salmon is grilled to golden hues, and served on a bed of arugula with roasted corn, red peppers, fingerling potatoes, tarragon, and citrus butter. 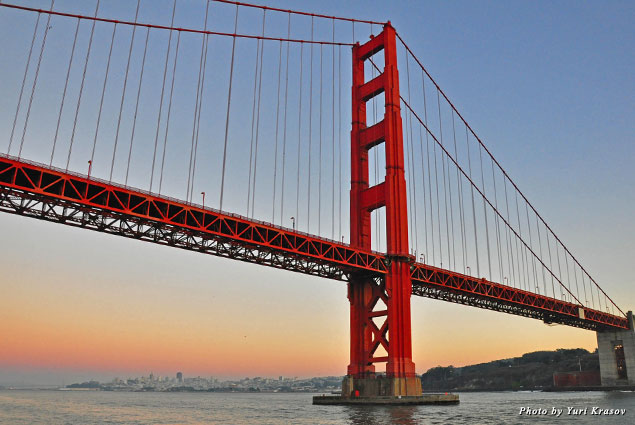 After dinner, we lined up in a company of other adventurers for a Blue & Gold Fleet bay cruise, which glides along the city shoreline, circles around Alcatraz Island, passes under both Golden Gate and Bay bridges, and literally sails into a sunset.

Even at night, the pier continues its non-stop entertainment program with street performers, different styles of music, and shops and restaurants open until the wee hours.

Happy but exhausted after a day of fun and games, we crossed the street to our hotel, Radisson Fisherman’s Wharf, with a fire pit in a palm tree-lined courtyard and a Sleep Number bed in our spacious room decorated with a dusky image of Golden Gate Bridge.

In the morning, we went back to Pier 39 for a fresh-brewed cup of coffee at Biscoff Coffee Corner and a leisurely Sunday breakfast at Wipeout Bar & Grill.

A California surf-themed restaurant, Wipeout has its own “beach” fire pit by the outdoor bar and is decorated with celebrity-signed surfboards and San Francisco-themed murals on the walls. 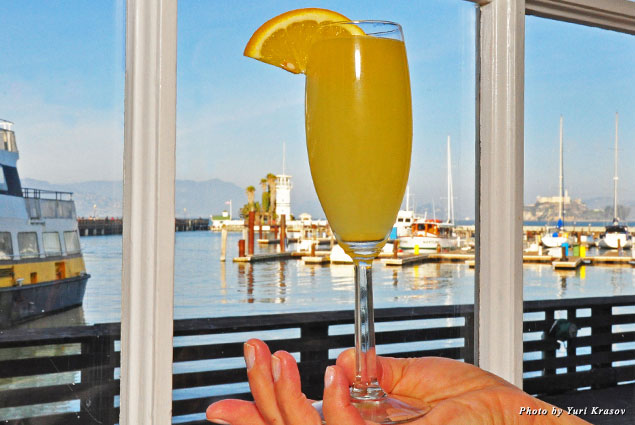 We had classic mimosas with a view and a solid “surfer’s” breakfast of steak and eggs and a Belgian waffle with whipped cream and strawberries.

All three restaurants we enjoyed on our Pier 39 outing—Pier Market Seafood Restaurant, Fog Harbor Fish House, and Wipeout Bar & Grill—are owned and operated by a prominent San Francisco family with a remarkable history.

Warren Simmons was the creator and developer of Pier 39, which opened in 1978, and his son, Scooter, daughter-in-law, Nancy, and grandchildren, Nicki and Ryan, now work in the businesses still owned by the family.

Three generations of Simmons are a part of San Francisco’s hospitality industry, striving to provide memorable experiences to the Pier 39 visitors and to preserve the beauty and bounty of the bay.

The family recently undertook a transition to the sourcing of sustainable ingredients for all seafood dishes in their restaurants with a general menu focus on seasonality, the use of local purveyors, generous portions, and non-tourist pricing.

Sourdough bread is baked on the premises in Simmons family restaurants, and desserts are made in house. Wine lists focus on California vintages, and cocktail lists focus on handcrafted classics and contemporary and signature creations.

The views of the bay, waterfront, and Pier 39 colony of sea lions from the restaurants’ windows are among the best in the city and highly appreciated by the local and out-of-town diners.