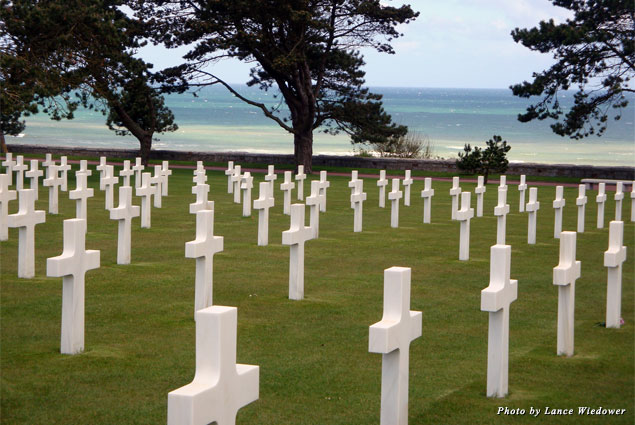 “Almost as soon as he left his plane, Private John Steele of the 82nd’s 505th Regiment saw that instead of landing in a lighted drop zone he was heading for the center of a town that seemed to be on fire. Then he saw German soldiers and French civilians running frantically about. Most of them, it seemed to Steele, were looking up at him. The next moment he was hit by something that felt ‘like the bite of a sharp knife.’ A bullet had smashed into his foot. Then Steele saw something that alarmed him even more. Swinging in his harness, unable to veer away from the town, he dangled helplessly as his chute carried him straight toward the church steeple at the edge of the square.” 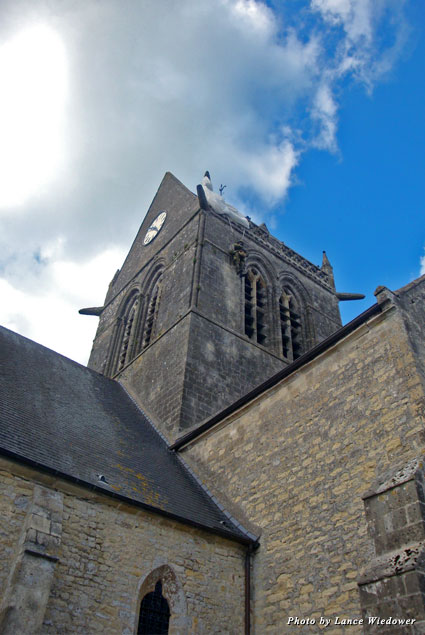 In the early-morning hours of June 6, 1944, Steele and thousands of other American and British paratroopers jumped into the unknown darkness of Normandy, France. The region, under occupation since France’s surrender to Germany in 1940, was heavily defended. Steele and other American paratroopers of the 82nd and 101st Airborne divisions at that moment were jumping into the western reaches of the Normandy battlefield to end that long four-year occupation. British-led paratroopers at the same moment were jumping some 100 kilometers to the east. The two were laying groundwork for what would be the largest naval assault in the history of warfare just hours later when nearly 7,000 ships would land thousands of fighting men and machines at sunrise on the five D-Day beaches code-named Sword, Juno, Gold, Utah, and Omaha.

Some drop zones were quiet; many paratroopers were dropped miles from their targets into flooded fields and would take hours to reach targets that needed to be secured that night. Others, such as Steele, found themselves falling helplessly into a heavily defended Sainte-Mère-Eglise, where a burning building in the village lit the sky. Sainte-Mère-Eglise, located just inland from what would forever be known as Utah Beach, became the first victory of that long day; it was the first village liberated in France.

Some 69 years later the road to Normandy is much easier than what is described by Cornelius Ryan in his book “The Longest Day,” which chronicles that historic day through the eyes of more than a thousand participants on both sides of the battle. Ferries from the United Kingdom are numerous if long. Guided tours and even day trips are available from Paris. But the easiest method into the region is by car from Paris, a comfortable three hours via modern toll roads.

A visit to the D-Day beaches and surrounding region easily could take a week if a visitor is interested in examining the numerous battlefields in the Norman hedgerows. In hindsight, that’s exactly what I’d like to do on my next trip; but we did manage to see some of the more important highlights of the American beaches and drop zones over parts of two days. 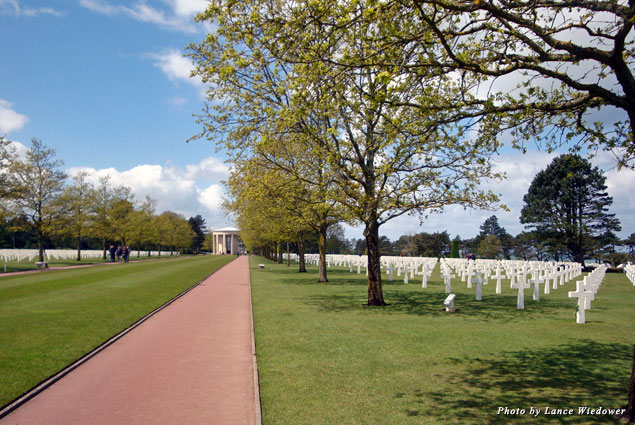 Upon arrival to the region when driving up from Paris the first American monument might be the most emotional: the American Cemetery at Omaha Beach. If you saw the movie “Saving Private Ryan” you probably recall the opening and ending scenes of the movie take place in the American Cemetery. It’s hard not to shed a few tears when watching the closing scene as the older version of Matt Damon’s character, Private Ryan, wonders aloud if he’s done enough with his life. There are thousands of unknown stories similar to that fictional account resting beneath the 9,387 tombstones of American military dead who lost their lives on D-Day and the days after. Whether one chooses to begin or end a trip to Normandy at the American Cemetery is an individual decision. We felt the beginning of the trip provided the best perspective for grasping the ultimate sacrifice made by the Greatest Generation on D-Day.

A visit to the cemetery begins at the welcome center with a good introduction to the battle. Watch the films or read some of the boards telling the stories of battle. Then exit to the rear of the building where views of the landing beach itself wait. 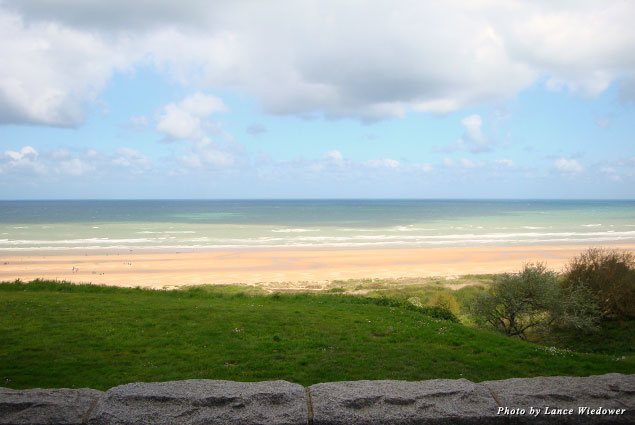 Looking at the beautiful stretch of sand leading from the English Channel it’s hard to imagine American soldiers being chewed up by German machine guns as they darted across the wide swath of sand. Take some time to wind down the trail leading from the bluff to the beach below. 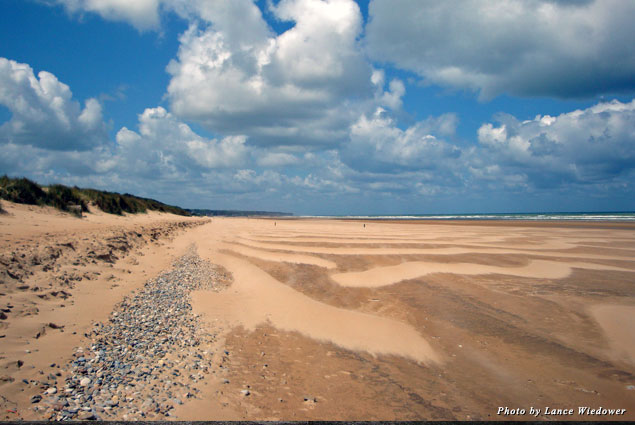 Once back up, the cemetery waits. The number is worth repeating: Here is the final resting place of 9,387 American military dead. There are other cemeteries in the region as well, honoring British and other Allies along with what is said to be a very moving German cemetery located near Bayeaux.

After spending time reflecting in the cemetery, drive west to observe one of the most harrowing challenges of that June 6 day, the US Army Rangers’ scaling of Pointe du Hoc. 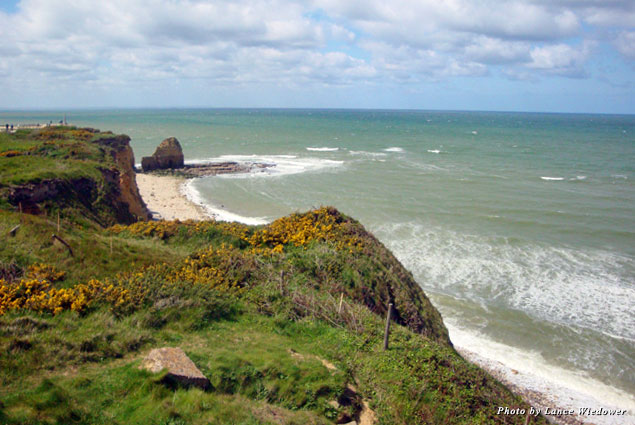 Sitting between Omaha Beach and Utah Beach, Pointe du Hoc is imposing and perfectly placed on the cliff overlooking the channel. It was believed the Germans had placed large guns there that, if put to use, could slaughter Americans landing to the west and east. Not only was the gun placement in a near-perfect position to defend the surrounding coastline, the high cliff would prove to be deadly for an invading force to attempt to scale. 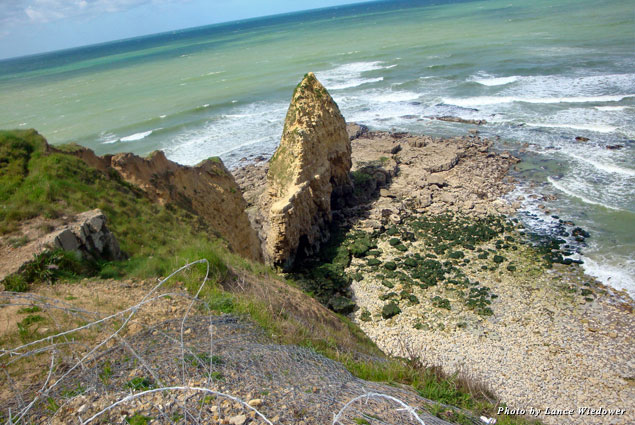 But that was the task that faced the Rangers, who scaled the 100-foot cliff only to find Germans waiting at the top. 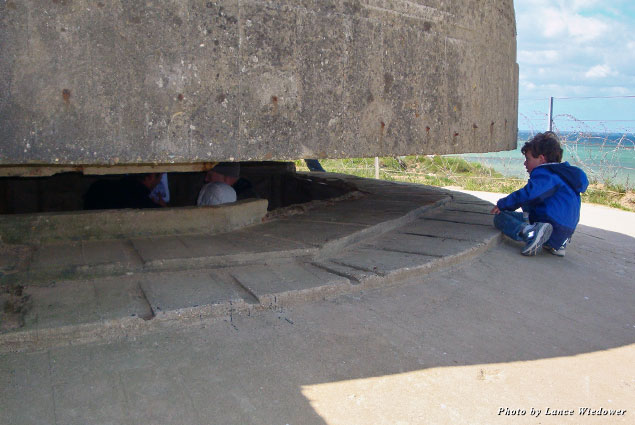 The American air forces did their part in softening the defenses at Pointe du Hoc, as seen with the numerous bomb craters that remain. 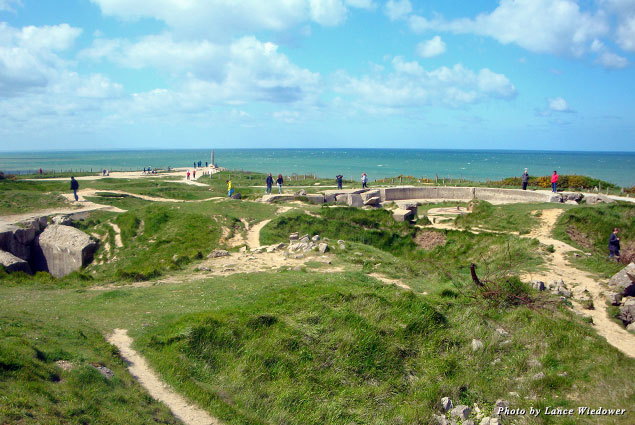 Younger visitors don’t understand the magnitude of the Normandy battlefields. But they do know how fun playing in the bomb craters can be. As we traveled with a 5-year-old, this proved to be the most fun part of the day.

Next up on the American experience tour is a 45-minute drive west to Utah Beach. The Musée du Débarquement at Utah Beach is open daily 10 a.m. to 6 p.m. at a minimal cost. There’s plenty to see here, but what excited me most was walking the wide beach and coming across random remnants of German bunkers and gun emplacements.

Utah Beach saw its own share of bloodshed, but it was relatively calm compared to the heavy loss of life at Omaha Beach. Utah Beach, in fact, was actually supposed to be about a mile away. But when the mistake was realized, General Theodore Roosevelt Jr.—the eldest son of the former president—made the decision to “start the war from right here.”

After walking around the beach and enjoying the museum, spend the night in the nearby Ivy House, a vacation cottage located within sight of Utah Beach. German soldiers once occupied the home while manning the nearby coastal defenses.

Day two of the journey can begin leisurely with a walk on Utah Beach before getting in the car for the nearly 30-minute drive through the hedgerows of Normandy toward Sainte-Mère-Eglise and the church steeple John Steele made famous. En route to the village, keep an eye posted for numerous memorials and monuments to various battles waged that long-ago day, including the Battle of Brecourt Manor, made famous in the second episode of the HBO hit series “Band of Brothers.”

Once parked in Sainte-Mère-Eglise, start out at the center of the village with its beautiful church and its replica of Steele hanging from the steeple. Inside, admire the stained-glass window created after the war to commemorate the village’s liberators.

After spending time learning about the heroics on the nearby landing beaches, consider visiting the Musée Airborne to get a better understanding of the war waged from the men who dropped from the sky.

Once finished in Sainte-Mère-Eglise, there are other options. Nearby in Carentan is the Dead Man’s Corner Museum. Or continue driving east to Caen, a city virtually destroyed from weeks of battle, and visit the Caen-Normandy Memorial Centre for History and Peace.

If time, the British landing beaches await. Just north of Caen is Memorial Pegasus, where the heroics of the British Airborne can be remembered. If familiar with “The Longest Day” you recall Major General Richard Gale’s orders: “Hold until relieved.” Gale and the 6th British Airborne Division held the Pegasus Bridge through the night, keeping German reinforcements from crossing the river and crushing the British beach landings.

You might also consider visiting the D-Day Museum at Arromanches, where in the distance in the channel one can still see what’s left of the artificial harbor built so the Allies could more quickly unload reinforcements and supplies.

It’s impossible to ever completely understand the sacrifice made by soldiers, sailors, airmen, French Resistance members, and the civilians of the region during that harrowing day. It is possible to appreciate it, something best done in the villages liberated in the early-morning hours; at the beaches codenamed Sword, Juno, Gold, Utah, and Omaha that still carry those names today; and at the cemeteries where thousands were laid to rest, such as the peaceful American Cemetery overlooking Omaha Beach.