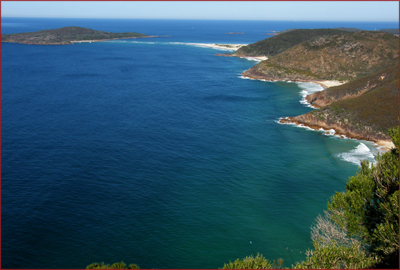 In 2005, I spent one day in Port Stephens, and at the time called it almost the best day of my life.

It was the first leg of a road trip between Wollongong and Brisbane, and we had camped near One Mile Beach that night. The next morning, as I crawled out of the tent, a koala crawled in front of it – the first time I’d ever seen one in the wild. We watched it – mesmerised – until we decided to walk to the beach. We had it to ourselves, save something that seemed to be stirring in the water. A flip of a distinctive large v-shaped tail told me it was a whale – also the first time I’d ever seen one. A pod of dolphins followed his playful swim up the coast. It was only 9.00, and it was already the luckiest day of my life.

Wary that my memories may be tinged with luck and nostalgia, we decided to return for a weekend. It was an unseasonably warm winter weekend, and truly felt like a getaway.

Our visit in August fell square in the middle of the northern whale migration, which runs from May to November through Port Stephens every year. During this time, an astounding 10,000 humpback and southern right whales migrate past its distinctive heads, which they use for navigation.

For a guaranteed spotting, we chose a whale watching tour, one of several operating out of the port’s main town, Nelson Bay. While cruises guarantee a sighting (or free return), so many whales use Port Stephens as a navigation point during their migration that they can often be spotted from lookouts or beaches. Our choice paid off, however, when we observed a humpback whale breaching. It was from a distance, but the spectacle – the mass – was simply magnificent. Spotting one of these massive and mysterious creatures is truly something everyone should experience – it’s pure magic. 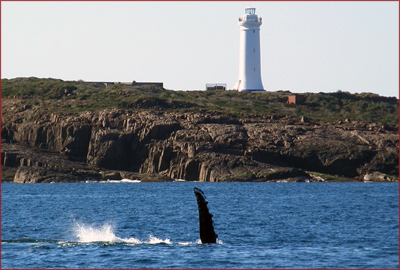 Day two, we decided to take advantage of more of Port Stephens’ natural wonders. We began with the famous Tomaree Heads walk, a half-hour climb overlooking the heads of Port Stephens. Green, once-volcanic mounds frame 360-degrees of coastal beauty, incorporating Shoal and Fingal Bay and the open sea. There is also what appears to be a spectacular walk to the Fingal Bay lighthouse, but any potential bushwalkers should be forewarned that the entire walk (there and back) must be completed at low tide in order to safely cross its delicate sand spit. We opted for a shorter walk and picnic at one of the lookouts on the mainland near Fingal Bay.

From Fingal Bay, we cut southwest toward Anna Bay, but had one important stop along the way; I had to see if there were still koalas near One Mile Beach. For an animal dangerously endangered, there are several healthy colonies throughout the Port Stephens region, including one along Gan Gan Road and One Mile Beach. We spotted one in a park adjacent to the beach entrance. To spot a koala, it’s best to know what to look for and what not to look for. During the day, you’ll only spot them sleeping, which usually happens curled in a ball in the highest limbs of the trees. Frankly, this means I usually look for their bums. Since koalas sleep for much of the day, observing them is more mesmerising than exciting. You can’t help but take an interest in the unique, lethargic, bear-like marsupial. They’re unlike anything else in the world, and you have more of a chance to spot a wild one in Port Stephens’ colonies than almost anywhere else in Australia. 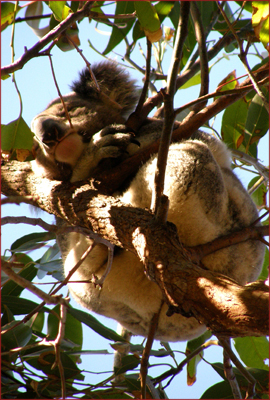 The final natural attraction on the day’s agenda was perhaps Port Stephens most famous. The Stockton Sand Dunes, on the peninsula’s southern shores, are the largest coastal sandmass in the Southern Hemisphere. There are many ways to explore the dunes, including by quad bike, dune buggy, horse, or even camel. However, one of the most popular is by sandboarding. I’ve been sandboarding elsewhere, but have to admit that nowhere matches the size and speed of Stockton Sand Dunes.

For the uninitiated, sandboarding consists of sliding (seated) down the face of a sand dune on a skinny board not unlike a snowboard. When you realise that Stockton’s dunes are more than 30 meters (90 feet) high, you also realise how exhilarating the fun can be. I use the term ‘fun’ intentionally; I’m vertigo-challenged, so if I can do it, almost anyone can. The steepness gives you speed, while the sand gives you a soft landing. It’s a safe thrill. We took a shuttle to the dunes, which allows you to stay as long as you please before returning on another shuttle. However, many operators also offer fixed-time tours that feature additional sites across the entire mass of the dunes. 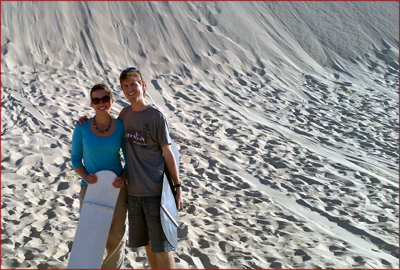 While the Port’s natural attractions were our personal highlights, there are several other food and hospitality options worth mentioning. With its coastal location, we were told ‘you can’t get bad seafood in Port Stephens.’ In our limited experience, this was true, and top-quality seafood doesn’t have to mean top-tier price. One of our favourite Aussie travel traditions is finding a good local fish ’n chip shop, buying it takeaway, then finding a lookout to enjoy dinner with a view (often joined by a bottle of local wine). In Port Stephens, we favoured Aussie Bobs fish ’n chips with views of Shoal Bay at dusk.

Also worth an honourable mention is Melaleuca Backpackers, where we spent our second night. While its name may suggest noisy youth, or dirty hostel, Melaleuca is anything but. They also offer camping and cabin accommodation, with full kitchen, barbecue, lounge and laundry facilities. The grounds and accommodation are Bali-inspired beauty, and well above average for a backpackers. The hosts are social and friendly, and there’s even a resident kangaroo who tried to find shelter in our tent when it began to rain that night. Worth the honourable mention.

In fact, much of Port Stephens is – from the wildlife (whales, koalas, kangaroos), to the scenery (spectacular Shoal and Fingal Bays), to the thrills (sandboarding, surfing). I’ll never forget the memories – or luck – of that first trip, but my second convinced me that it wasn’t pure nostalgia.

The Port Stephens region is 2 ½ hours north of Sydney via the F3 freeway, or 3 ½ hours to take the freeway to Gosford, then follow the more scenic road along the coast. Information on the range of accommodation and attraction options available for visitors is available of the Port Stephens tourism website.