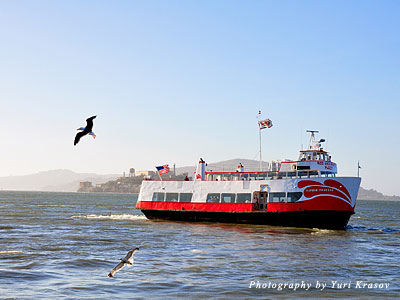 One of the staples of San Francisco sightseeing, SF Bay Sunset Cruise, just got better. The Bollywood Sunset Cruise, complete with an Indian cuisine buffet, music, and dancing, is a new addition to the well-loved repertoire of the historic Red and White Fleet. Already popular with city dwellers and their guests, the new joy ride sails past Alcatraz Island, Angel Island, Tiburon and Sausalito, and makes a spectacular loop under the Golden Gate Bridge – bright orange with a string of lights against the midnight-blue sky. 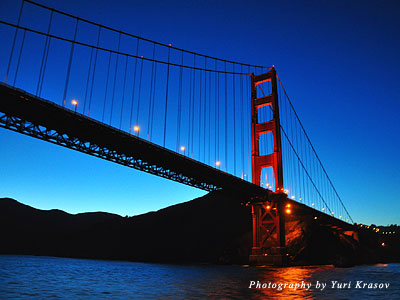 On the night my husband and I joined the fun, a San Francisco dance company, Cree8 Productions, presented Bollywood-style dances in beautiful costumes right in the middle of the passenger salon, in close proximity to the viewers. 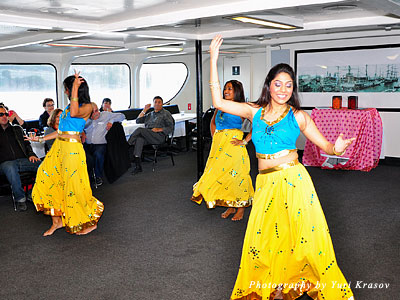 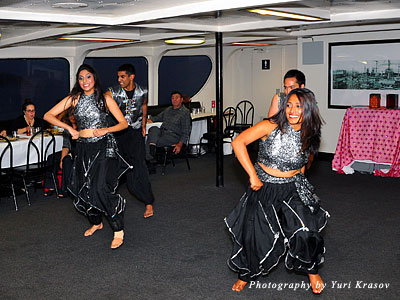 I spotted more than one passenger afterward trying to replicate the dancers’ energetic moves on the upper deck. Okay, okay, I was one of them, and yes, I think I can dance.

An abundant buffet was provided by Kasa Indian Eatery from the 18th Street in San Francisco, and offered all the good stuff to be served on a traditional metal plate.

Warm roti (flat bread), chicken tikka masala, Basmati rice, daal (lentils) and a variety of vegetables, salads, and spicy sauces were fragrant, appetizing, and satisfying without being overwhelming. The open bar was well-stocked with beer and wine; our captain insured a smooth ride, and the staff was excellent, as is always the case with Red and White Fleet. 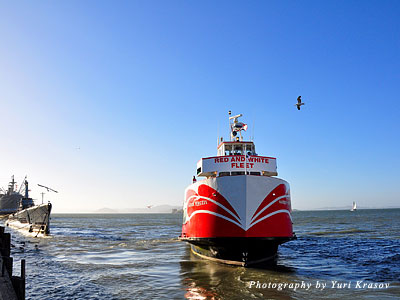 This family-owned historic company continues a wonderful tradition of the Golden Gate Bay Cruise, started as part of the Golden Gate International Exposition in 1939. Since then, a number of new cruises were added, including this year’s Bridge 2 Bridge Cruise, showcasing the City by the Bay in a 90-minute excursion. It promises to be the most popular one during the upcoming Americas Cup Races in 2012 and 2013. Both cruises are supplemented with audio recordings in twelve languages.

Red and White Fleet departs from Pier 43 1/2 at the end of Taylor Street on Embarcadero, San Francisco. More information at: 415-673-2900 or their website.