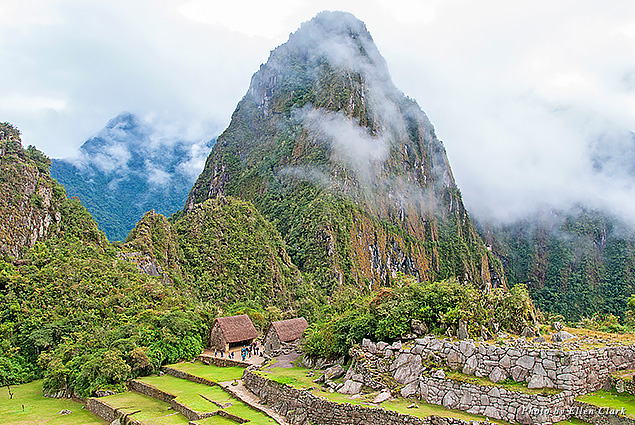 “You’re going all the way to Peru for only six days?” asked my less travel-mad friends. Well, yeah, Peru’s a fascinating country, and I’d have loved to go for a couple of weeks, but I wasn’t passing up the trip at a price I couldn’t refuse, even if it was a whirlwind itinerary.

A red-eye from Los Angeles deposited me in Lima at just about lunchtime, so my first stop was the Larco Museum restaurant. Al fresco dining under a canopy of hot pink bougainvillea while sipping pisco sours and eating scallops in the shell—what a way to start a quickie tour of Peru. 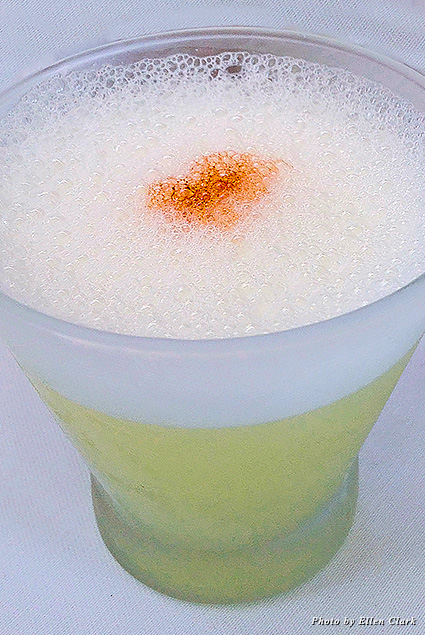 If you’ve never had a pisco sour, you’re in for a treat. It’s the unofficial national drink and is sour, sweet, ice cold, and dangerous. It is so refreshing and tasty and goes down so easily that it’s not hard to convince yourself it is benign. Have too many and you’ll find out differently. 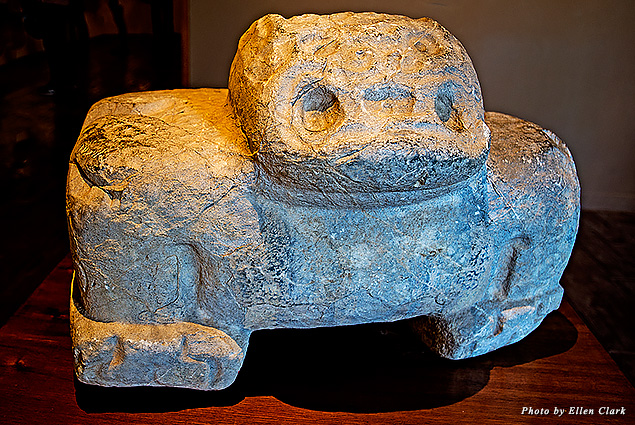 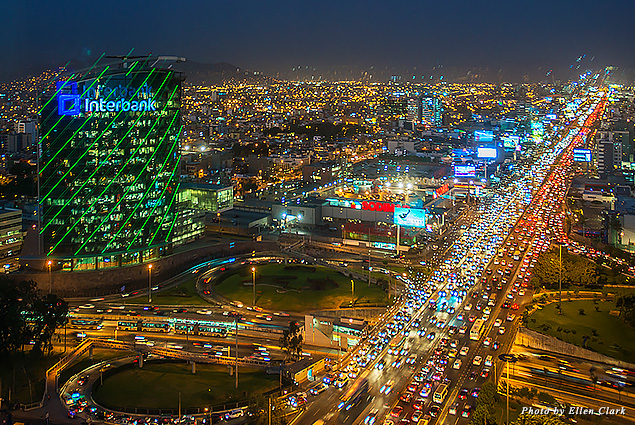 Lima traffic is legendary, and it’s especially bad at rush hour. My lofty room at the Westin Lima Hotel & Convention Center was the perfect place to see just how bad. I’m from Los Angeles—also legendary in the traffic department—but I think Lima could give LA a run for its money. Seeing the mass of cars at a virtual standstill, I opted for dinner at a restaurant close to the hotel and an early night. 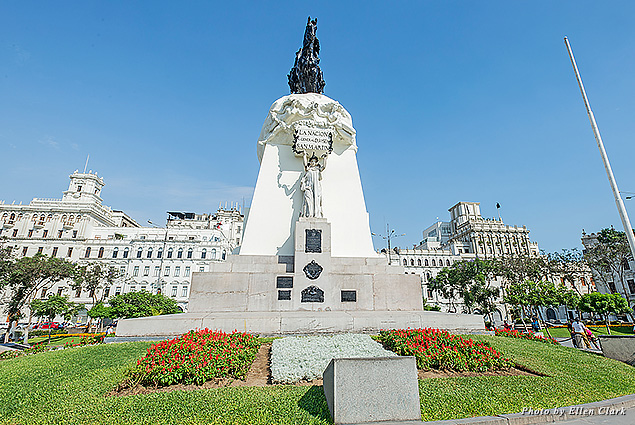 The next morning, I was off to see what Lima had to offer. I started at Plaza San Martin. A bustling place, it’s in the Historic Centre of Lima and its central monument pays homage to Peru’s liberator José de San Martin. The Historic Centre, a UNESCO World Heritage site, is Lima’s most visited area. There are pedestrian-only shopping streets and the Main Square where the Basilica Cathedral and many other impressive Spanish colonial style buildings are located. 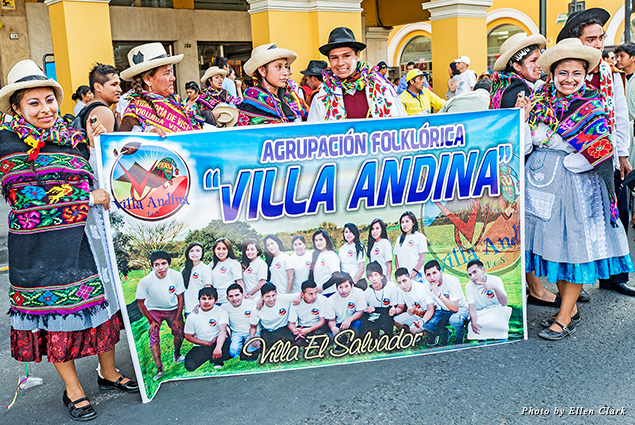 There is almost always some sort of celebration going on in the Historic Centre, and, sure enough, when I arrived at the Main Square, I found a parade in progress. I never did really grasp what it was for, but it was lively, the costumes were colorful, and it made for some great photo ops. 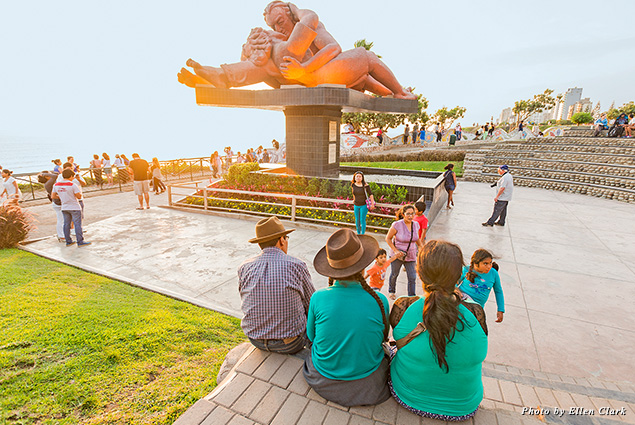 My last stop was to watch the sunset from a place called Love Park. Overlooking the Pacific Ocean in the upscale neighborhood of Miraflores, the park is surrounded by walls of mosaic tiles with romantic sayings and a huge statue of two lovers embracing.

My pre-dawn wake-up call wasn’t exactly welcome, but it was necessary to catch an early-morning flight to Cusco to meet up with Inca Rail, the train to Machu Picchu. 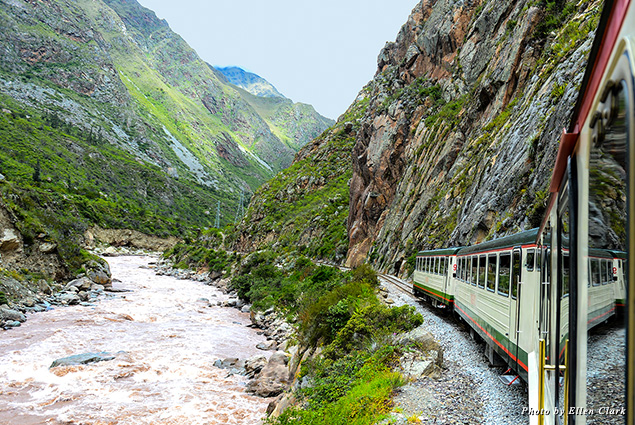 The train swung and swayed as it twisted through the fertile Sacred Valley. I fought like mad to stay awake, but my early morning was taking its toll and I dropped off more than once. Finally, we pulled into Aguas Caliente, the town that sits at the bottom of the hillside road that winds up to Machu Picchu. I grabbed my bags and walked past stalls selling souvenirs to the Inkaterra Machu Picchu Pueblo Hotel. 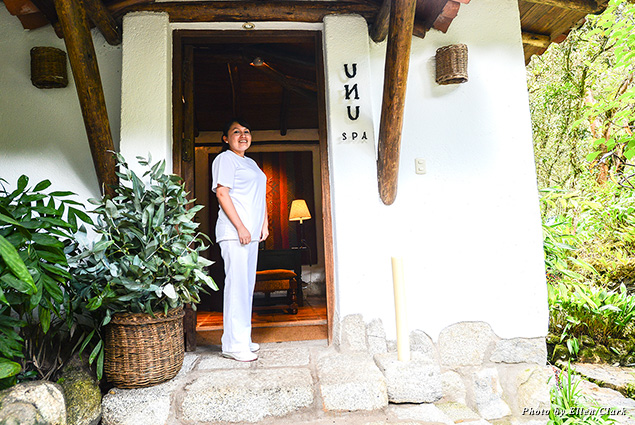 The hotel sits on 12 acres of lushly planted land with cottages sprinkled here and there connected by stone paths. Considering my early morning and jam-packed schedule, an afternoon at the spa sounded like a dandy idea. I opted for what was advertised as a uniquely Andean spa experience. This included a purification session in the hotel’s Andean sauna and various treatments using the famous Peruvian coca leaf, thought to help detoxify and improve the body’s circulation. It was sprinkling when I finished my treatment, which gave me a perfect excuse to take a short nap before dinner.

My original intention was to take the early bus to Machu Picchu in order to photograph the sunrise. However, one look out the window was all it took to figure out there would be no sunrise, since it was teeming with rain. So I opted for a leisurely breakfast instead, before heading up the mountain.

Rain or no rain, Machu Picchu was an impressive sight. And one of the benefits of less than ideal weather conditions was one of the world’s most famous sites was not crawling with tourists. It was hard for me to wrap my head around the fact that these impressive stone structures had been constructed more than six centuries ago. I wished I had more time to wander around the site, but my time was short and all too soon I was on the bus headed back down the hill to catch the train back to Cusco.

Cusco, a UNESCO World Heritage site, is a beautiful, historic city and definitely worthy of a longer stay. But on this whirlwind trip there was only time for a tantalizing preview. So, after an overnight and a brief morning tour, I was back at the airport headed for the Amazon.

My little stand-alone cottage surrounded by lush greenery and exotic brightly colored flowers at Inkaterra Hacienda Concepcion was perfect for my short stay in the exotic and mysterious Amazon. The property is adjacent to the lower Madre de Dios River region of Tambopata National Reserve at the edge of the rainforest. One of the lodge’s guides, Carlos, took us on a nature walk and acquainted us with the local flora and fauna while we watched chattering monkeys swing from the trees high above our heads.

After the walk, Carlos joined us for cocktail hour in the main lodge. While we sipped frosty pisco sours, he reviewed options for the next morning. A number of people opted for the four-mile hike to Sandoval Lake, which, we were warned, included a lot of mud. I’ve slogged through knee-deep mud before and had no interest in repeating the experience, so I opted for a canoe ride around the lodge’s small private lake where I could photograph exotic bird life. Boy was that the right choice. It turned out the hike was six miles, not four, and the mud was substantially deeper and gooier than advertised.

By afternoon it was raining, but that wasn’t going to stop me from my final Amazon adventure: taking the much talked about canopy walk. Dressed in a waterproof poncho, I climbed up one of the 115-foot observation towers and proceeded to cautiously navigate the seven swaying bridges, outfitted with special cables and lateral mesh, which hung suspended over the forest floor. Not much beats walking amongst the treetops in the Peruvian Amazon. It was a fitting finale to my whirlwind trip to fabulous Peru.

Luck, Llamas, and a Peruvian Shaman