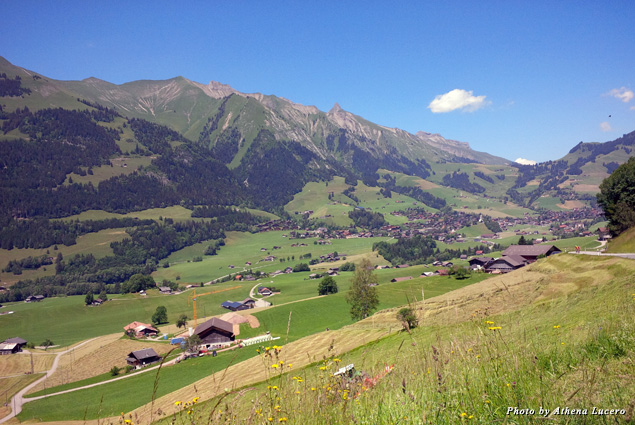 Three villages. Cheese making. Paper cut art. Roots. In a few words, this is Pays-d’Enhaut, the tranquil mountain region nestled in the pre-Alps of Switzerland’s canton Vaud. The region is north of Lake Geneva’s chic lakeside resorts, and its name is French for “the land up above.” A one-hour train ride from posh Montreux at the lake, life here is a world away where time, well, takes its time.

I happened upon this slice from the past while on a summer day trip to the village of Chateau d’Oex 3,143 feet above sea level to learn about the origin of its luxurious mountain cheese with a history that dates back to the 12th century (an official Cheese Train excursion is offered each year from December to April).

While discovering a fascinating cheese making tradition that hasn’t strayed much from ancient methods, I learned also about the rhythm of life around Pays-d’Enhaut. Its three main villages—Chateau-d’Oex, Rougemont, and Rossiniere—and a handful of smaller communes remain deeply connected to those earlier times when the people of this mountain region isolated during the Middle Ages pioneered what would become one of Switzerland’s main industries.

As the train rolled into the high country drop-dead landscapes of peaceful meadows, scattered forests, and towering rocky cliffs made me sigh. 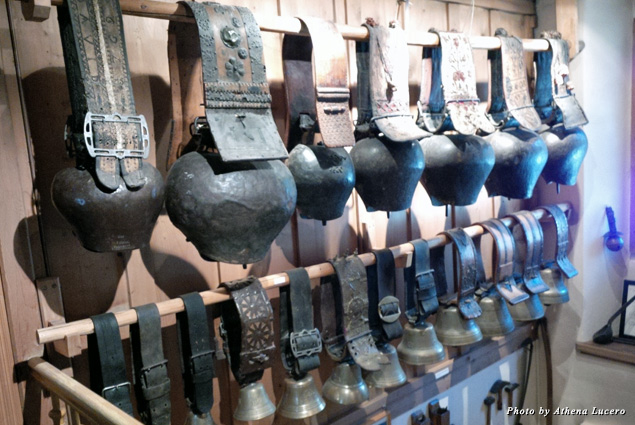 At the train station in Chateau–d’Oex, the largest village, I met up with Frederic Delachaux, director of tourism for Pays-d’Enhaut. Delachaux is a fifth generation descendant of the area, and I could not have had a more knowledgeable host to show me around this storybook-like land with a total population of less than 5,000 inhabitants.

“This valley was once covered completely by forests,” said Delachaux. “To make money, the people raised cows, made cheese, and delivered it by foot to the village of Vevey at the lake.” It was a good income, he said, and the cheese makers became very wealthy.

The thriving mountain community began building homes from wood cut in the pine forests, leaving behind the dramatic design of the countryside that took my breath away. With tools made by hand along with impeccable skills and craftsmanship, handsome chalets were constructed—and have stood the test of time. On a walk around the villages, ornately carved ancient chalets were the largest and most beautiful I had ever seen. 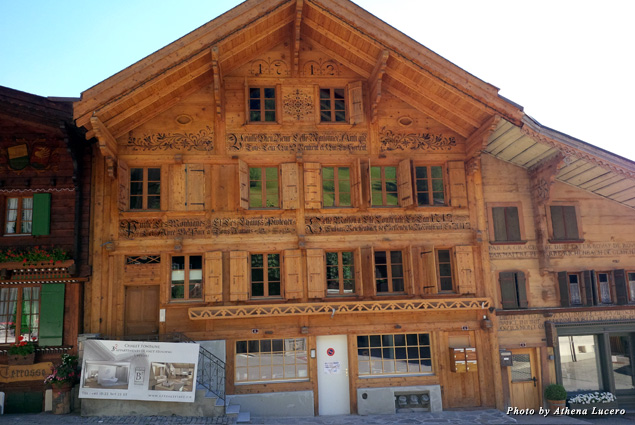 It was during the late 19th century that travelers from England and other parts of Europe started spending their holidays immersed in Lake Geneva’s natural beauty and healthy air of the Alps. They were curious, too, about the wonderful mountain cheese and took day trips on the GoldenPass railway to see where it was made.

That excursion from the past has been revived with the December 2013 launch of the Cheese Train on the GoldenPass Line. In an elegantly restored Belle Époque carriage with warm wood paneling, richly upholstered seats, and shiny brass fixtures, 21st century guests are treated to a bit of nostalgia during a three-part program that includes a tour of the cheese factory led by a master cheese maker, lunch in the rustic ambience of Restaurant Le Chalet (cheese fondue, of course), and a visit to the Museum of Old Pays-d’Enhaut, one of Switzerland’s most important folk art museums that opened in 1922. 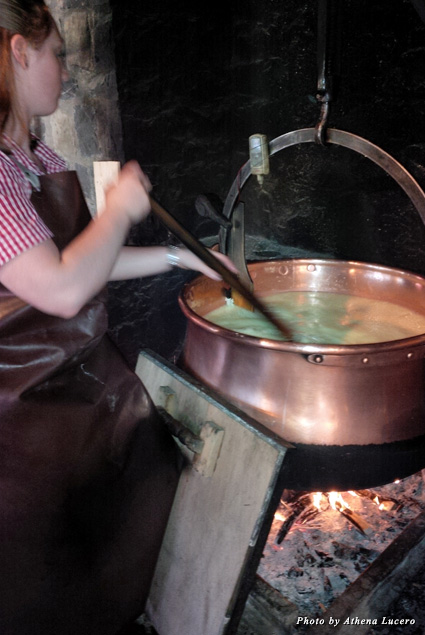 The ancient days of cheese making had begun as a prolific business, but with time came challenges. People in the flatlands at the lake eventually started making their own cheese, Delachaux explained, which killed the business in the mountains.

In 1932, a group of 30 determined farmers had the vision to breathe life back into the business of making the region’s beloved mountain cheese the way their ancestors did—in copper cauldrons and always, always over an open wood fire. Today, almost 70 families whose cheese making traditions have been passed down through the generations comprise the Cooperative of L’Etivaz, the hamlet of its origin.

Each May, in a ceremonial rite of summer, Simmental cows (indigenous to the region and one of the world’s oldest breeds of cattle dating back to the Middle Ages) leave the valley for the climb to alpine pastures, la poya, as high as 6,500 feet above sea level to graze all summer on a smorgasbord of grass, flowers, and herbs—violets, narcissus, purple clover, oregano, and cumin to name a few—the trademark recipe of what many call the “Patron Saint of Cheese” made only during the short summer season from the fresh raw milk of grazing cows, the key to its prized characteristics. 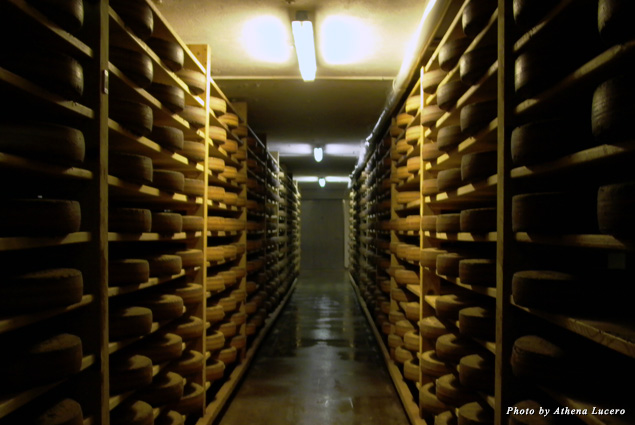 In alpine chalets cheese makers stir and separate the curd from the whey, then press the cheese. Several times a week they deliver the divine wheels—weighing from 45 pounds to more than 100 pounds each—down to the ripening cellars in the valley where they are pampered at least five months until maturity. First a bath in brine (to preserve and make the protective rind); then regularly turned and rubbed with salt (to sweat and enrich flavor); and finally, stored on raw spruce shelves (to achieve its fine texture, flavors, and soft ivory color).

Another L’Etivaz original is “old” cheese, or rebibes, aged for more than three years. This hard cheese with a pronounced taste is shaven into wafer-thin rolls, a favorite of cheese lovers to eat as a snack or to enjoy as an aperitif with wine.

Visitors can sample and purchase L’Etivaz cheese products as well as other locally made food and gift items at La Maison de L’Etivaz, the lovely shop next to the cheese cellars.

The farmers who brought back cheese-making traditions here never had to look back. Demand kept growing and ripening cellars expanded three times—in 1974, 1986, and 2005—to now store more than 20,000 wheels.

And while ancient methods of making L’Etivaz cheese are here to stay, the totally modern hi-tech ripening cellars use a robot that turns 600 wheels a day.

L’Etivaz cheese is exported, but not as widely as other Swiss cheeses, to specialty stores in only a few countries around the world. And the cheese is now protected. In 1999, it was the first Swiss product awarded Appellation d’Origine Controlee (AOC) accreditation to guarantee that the cheese comes from the unique terroir of L’Etivaz.

The story of this once-remote community all came together when I stepped into the mountain ambience of the Museum of Old Pays-d’Enhaut. Inside the rustic three-story wooden structure (once a private home) rooms are a treasure trove of relics and objets d’art that take guests back to a time when there was so much of it. 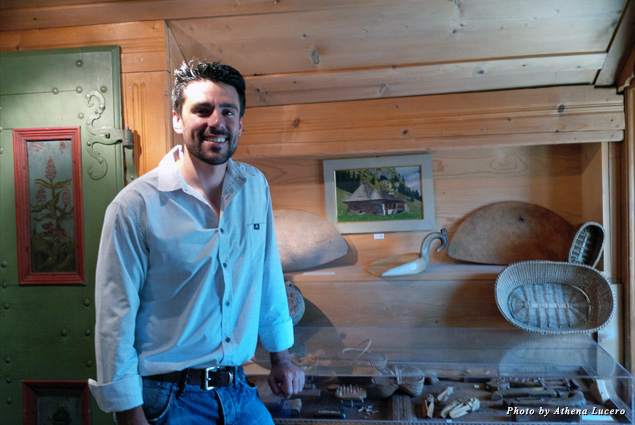 Displays of exquisite crafts made by hand and artifacts from the 14th century demonstrated the creative and technical skills of the hardworking townspeople, from fine furniture made with delicate inlays to ladle-shaped heirloom-worthy spoons carved from wood for each member of the family, a craft still unique to the region. 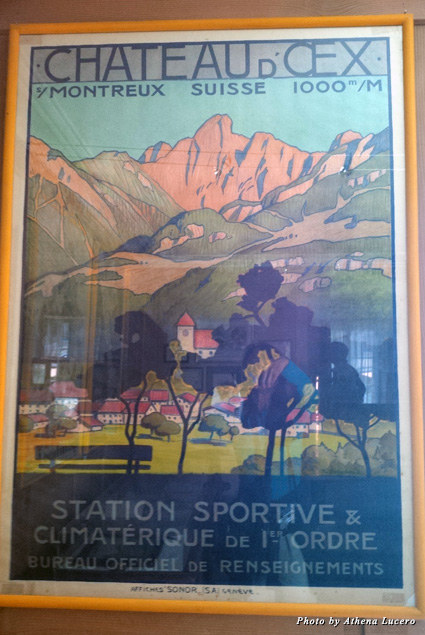 Even an 18th century love letter written laboriously in calligraphy caught my eye.  I couldn’t resist asking Delachaux to translate a tad. “Honourable beauty that my heart sighs, would dare tell you what my heart desires!” Now that made me blush.

But the centerpiece of the museum is the extraordinary exhibit of approximately 60 treasured paper cuts, or decoupage, as I had never seen the art form before.

What started as a hobby for Hans Jacob Hauswirth (1809-1871), the father of Swiss paper cut art, followed by Louis Saugy (1871-1953) evolved into an internationally renowned folk art, storytelling medium, and pictorial recordkeeping of day-to-day alpine life in Pays-d’Enhaut. 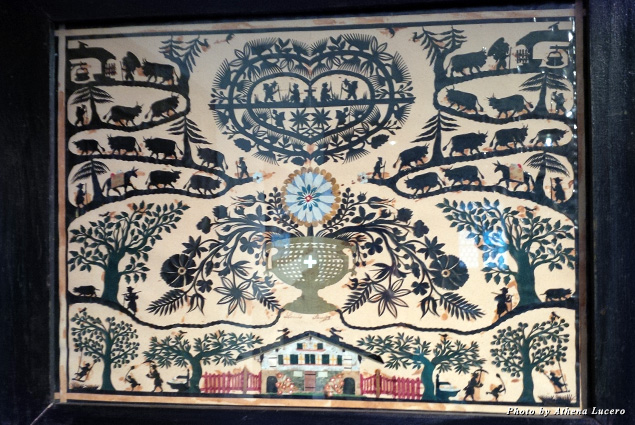 Like a child with her nose against the window of a candy store, I was both charmed and hypnotized by the symmetrical detail of whimsical scenes and characters achieved with folded paper, scissors, scalpels, plenty of skill, and unimaginable patience. Cows on their annual ascent to alpine pastures, cauldrons on wood fires, herdsmen, women, children, chalets, flowers, pine trees, and lots of hearts are common themes.

According to Delachaux, numerous paper cuts by Hauswirth and Saugy, the masters, depict real events and real people who lived in the villages and actual chalets that still stand today “…right down to the exact number of windows.”

Today, contemporary paper cut artists are as passionate as were the masters. Corinne Karnstadt started paper cutting in 2008 and is among the 10 decoupeurs, or paper cut artists, in the region who comprise l’Association Suisse des Amis du Decoupages Sur Papier. 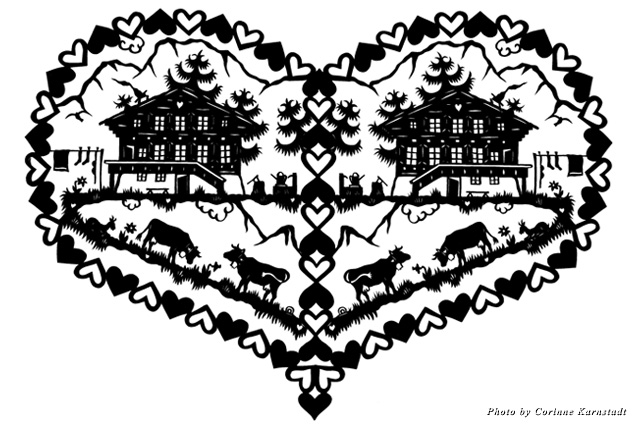 “The art of decoupage is really famous in my valley, and I always had loved it…. One day, I decided to try the art … and I’ve never stopped,” said Karnstadt who now teaches the craft.

Outside the museum paper cut art is highly desired and often commissioned for private collections. During dinner in Rossiniere that evening, Delachaux was eager to show me a pair of contemporary pieces at Les Jardins de la Tour, a lovely and discreet Michelin-starred restaurant owned by chef Patrick Gazeau and his elegant wife Barbara Schopfer. Inside the elegantly rustic dining room, I felt more like a guest in a private home that had no more than six tables.

We enjoyed aperitifs on the terrace then walked a few steps through the garden to the Balthus Chapel, the humble resting place of Balthus (as the French artist was known), one of the most renowned 20th century figurative painters who died in 2001 at the age of 92. The very private Balthus and his Japanese wife, the Countess Setsuko Klossowska de Rola, lived in the 300-year-old, 113-room Grand Chalet. Built in 1754, it is the largest chalet in Switzerland. The chapel is dedicated to the memory of Balthus with documentary films and reproductions of paintings, photographs, and personal letters.

Needless to say, our meal was divine. The course of raw filet of Fera (a rare indigenous fish from Lake Geneva) was not only visually beautiful, but also it represented everything about this valley—natural, authentic, uncomplicated. It was so, so delicious.

My lodging for the night was at the quintessential, comfortable, and cozy Hotel de Ville (any town this romantic and communal should have such an inn). I opened the small window of my room to admire the quiet view of the Church of Chateau d’Oex and simple storefronts—no shopping malls, no fast food, no supermarkets.

Just as the first tourists were attracted to Pays-d’Enhaut for its mountain scenery, the area still beckons lovers of the outdoors for hiking, cycling, skiing, hot air ballooning, and paragliding (Delachaux knows about this, too, as he was a former director of the hot air balloon festival and taught paragliding.)

Most of all, people come for the cheese.