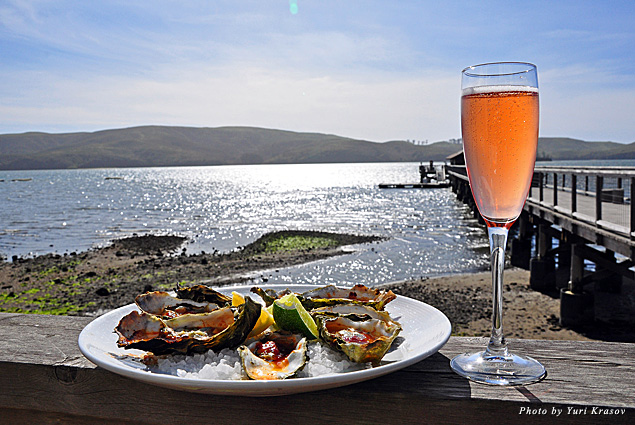 Freshly shucked with a wedge of lemon or grilled and smothered with barbeque sauce, oysters are a specialty at Nick’s Cove, which overlooks Tomales Bay. In Marshall, an unincorporated community in Marin County, California, where Nick’s Cove is located, everything pretty much rotates around oyster interests.

This tiny town, about an hour drive from San Francisco, has a population of 50 to 400, according to different sources, but on any day of the week it’s teeming with oyster lovers, sipping Schramsberg Mirabelle Brut Rosé and savoring bivalves in any nook and cranny of Nick’s Cove or along a 400-foot-long pier leading to a boat shack with a spectacular view of Hog Island. 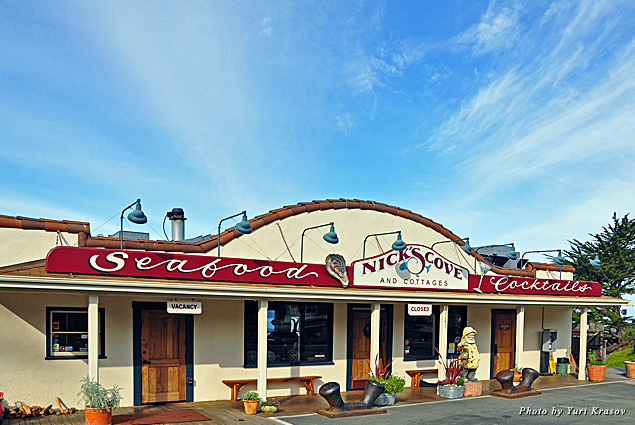 The oysters come from their own neat and clean beds in the bay; they can’t be any fresher than that. The waterfront restaurant, with a glass-covered patio, festively decorated mahogany bar, and impressive stone-plated fireplace, was completely renovated about six years ago and updated by new owners in 2011. 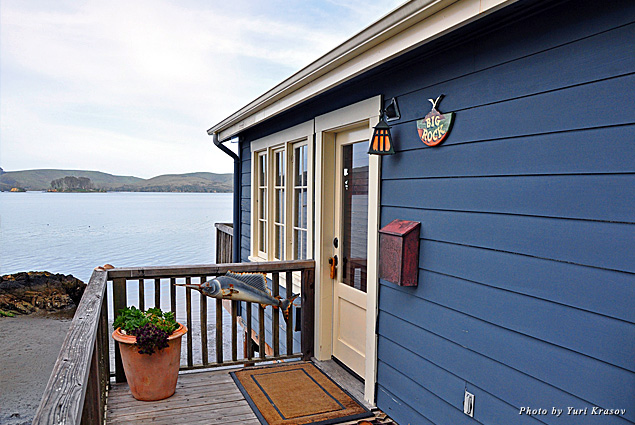 Nick’s Cove is one of the last remaining historical establishments continuously dedicated to the tourist trade, fishing, and sustainable agriculture since the early days of California travel. It got its name from a Yugoslavian immigrant named Nick Kojich, the original owner of the property, who was attracted to the similarity of Tomales Bay to the Adriatic Sea, with its mild winters and shallow waters. In the 1930s, Nick and Frances Kojich built several cottages on stilts over the water and opened a seafood restaurant.

The succession of subsequent owners—Andrew and Dorothy Matkovic, Alfred and Ruth Gibson—continued to improve the business, and it inevitably attracted travelers along California Highway 1, the most beautiful road in the country, which runs mostly along the Pacific coastline. The current owners of Nick’s Cove preserve the traditional architecture and historical ambiance of the cottages while perfecting the décor and adding modern amenities. 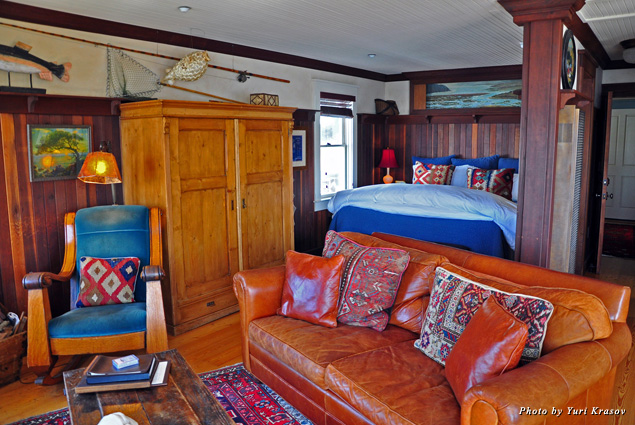 Staying at the Big Rock Cottage is like traveling back in time or being on a movie set of a period flick. The house is furnished with antique wooden furniture, a leather sofa, oriental rugs, and fishing paraphernalia. Hardwood floors and wall panels, mica light fixtures, a wood-burning oven, and, especially, a hammered copper bathtub and a wooden “commode” create an illusion that nothing has changed here since the Hollywood glamour epoch. However, this impression is deceptive; there is a heated marble floor in the bathroom, a contemporary temperature control throughout the house, and a nicely appointed kitchenette with a wet bar and all the necessities.

Internet, telephone, and television are also available, but it seems a travesty to use these amenities in a place such as this, where much better time would be spent watching egrets follow tides and ebbs in search of prey, contemplating a sunset through the wide dining room windows, or listening to the soft splashing sound of waves right underneath the floorboards. 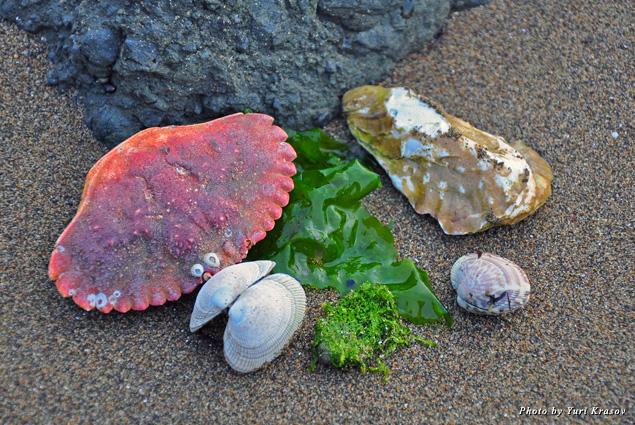 Big Rock Cottage has its own little beach, where all the treasures of flotsam and jetsam can be found, and it is a part of a duplex called Big Rock/Little Rock. Each of the adjacent bedrooms have their own bathroom and street entrance so the cottage can be rented for a big family or for two families with utmost comfort.

Dining at the Nick’s Cove Restaurant is an event in its own right. Executive chef Austin Perkins creates an amazing array of delectable treats using seafood from the bay and fresh produce from the surrounding Marin and Sonoma County farms. (It definitely helps being smack in the middle of the most sophisticated agricultural region.)

Raw Miyagi oysters from Tomales Bay don’t really need much adornment, but they surely benefit from champagne and shallot mignonette. 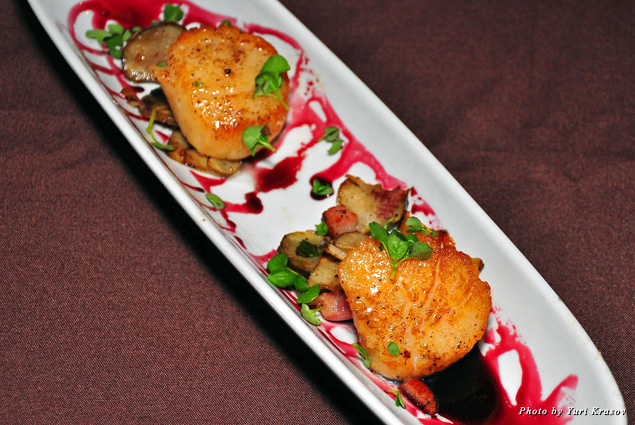 Rosotti Ranch goat meatballs are served in a little cast-iron cocotte, covered with melted leek tomato sauce and fine herbs. A good chunk of Columbia River white sturgeon is wrapped in Fra’Mani ham and topped with green garlic soubise on a bed of lacinato kale in piquillo pepper sauce. 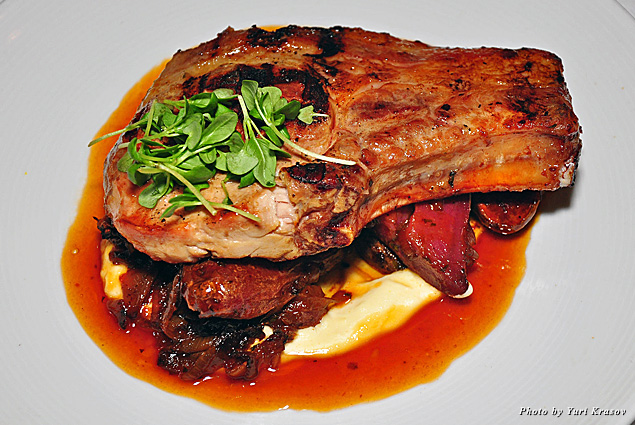 The menu changes often to accommodate chef Perkins’ creativity, the catch of the day, and seasonal markets, but most likely you won’t be disappointed with any of the available choices.

Among the seasonal desserts, created by the pastry chef Gillian Helquist, there might be a warm rhubarb upside down cake in a delicate round crust, served with a scoop of crème fraîche ice cream and light caramel sauce. 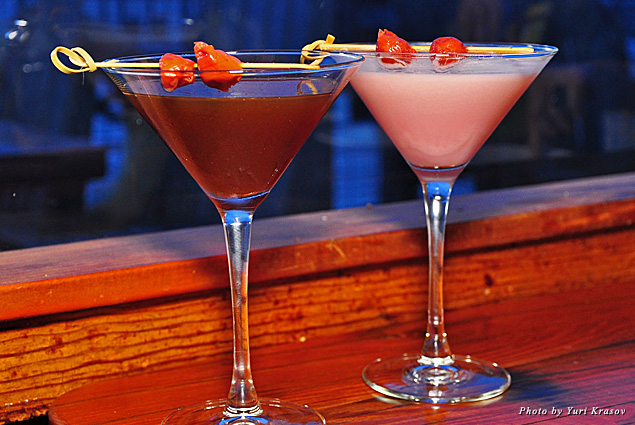 Long after the restaurant patrons finish their dinner, the bar area is alive—and for a good reason; a comprehensive wine, beer, and cocktail list keeps them coming back for more. Having a Marshall Manhattan (Breaking and Entering Bourbon, Anderson Valley Oatmeal Stout syrup) or a Pink Lady (Junipero gin, St. Germain, cherry juice, cream) while sitting at a table for two by a glass wall and looking out at the pier and boat shack in Christmas lights is a wonderful experience. For some reason, it’s never boring to be close to water….

To top the endlessly enticing stay at Nick’s Cove, a scrumptious breakfast for two is delivered to the cottage in the morning with the day’s edition of the San Francisco Chronicle.

Napa Valley’s St. Helena: Green Is Gold Geyserville, California, Is Worth a Visit