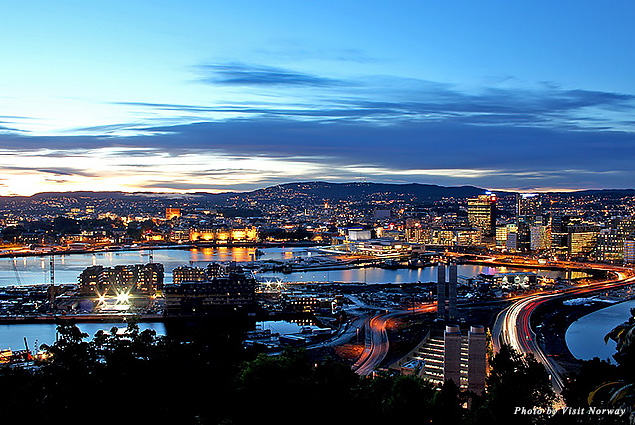 Mention European capitals and Oslo, Norway, doesn’t usually spring to mind. Except, perhaps, on December 10, when the Nobel Peace Prize is handed out in Oslo City Hall. But it’s precisely this lack of knowledge that makes visiting Oslo so spectacular. Once you spend a few days in this waterfront metropolis of 480,000, you’ll wonder what took you so long! I had the good fortune to visit Oslo in August, and I discovered it’s a fabulous city.

Oslo is cozy enough to walk to major attractions, of which there are dozens, from world-famous art—think The Scream by Edvard Munch—to 1,000-year-old Viking ships. It is chic enough to boast Europe’s newest and trendiest architecture, restaurants, and boutiques, and friendly enough to make you immediately feel at home (everyone I met spoke English and most had visited or have family and friends in Southern California, my home region). And it’s squeaky clean. There are simply no “fixer-uppers” in Oslo. Every building, whether ancient or new, is in mint condition. 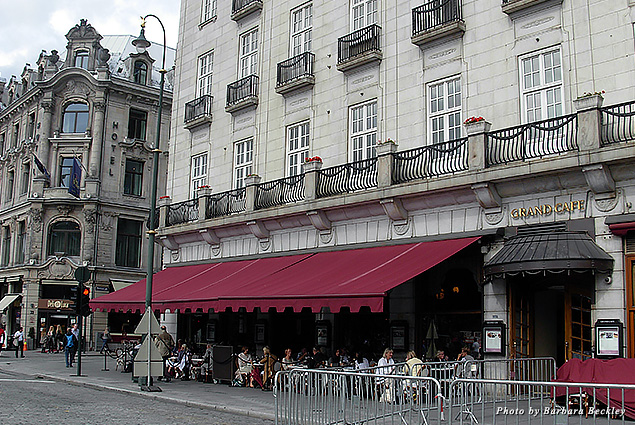 Being a Southern Californian, I’m not big on public transportation. But even I found getting from Oslo International Airport, located 30 miles outside the city, a breeze on the high-speed Flytoget Airport Express Train. After picking up my luggage, I simply rolled it a short way to the train, which is conveniently located inside the terminal. In 19 scenic minutes, I was strolling across the sunny Oslo Central Station plaza in the heart of downtown. My hotel, the Clarion Hotel Royal Christiania, was only a block away. The contemporary-style high-rise is perfectly positioned for sightseeing: surrounded by shops and cafés; within two blocks of Karl Johans Gate (Oslo’s main avenue), Oslo Cathedral, and Tjuvholmen, one of Europe’s most trend-setting new neighborhoods; and home to the ultra-chic Thief Hotel. 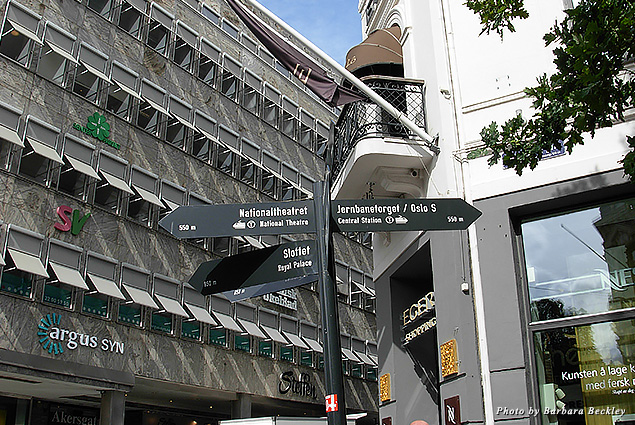 After settling in, it was time to explore the tree-lined streets. I sipped a cappuccino and people-watched from under the red brick arches of the Café Cathedral. Then I joined the throngs of tall, good-looking locals and tourists strolling along Karl Johans Gate. I stopped to watch the street performers and snapped photos of the lion sculptures standing guard outside the Parliament, the ionic columns on the National Theater, and the imposing Royal Palace, home to the reigning king and queen of Norway. Outside the posh Grand Hotel Oslo, where the Nobel Peace Prize banquet is held, a jazz band was giving a free concert. I was surprised at the group’s phenomenal Dave Brubeck and Benny Goodman renditions. I shouldn’t have been. It turns out the Oslo Jazz Festival is one of Europe’s oldest and best with stars from around the world. This was a promo for the August 10-15, 2015, gig. 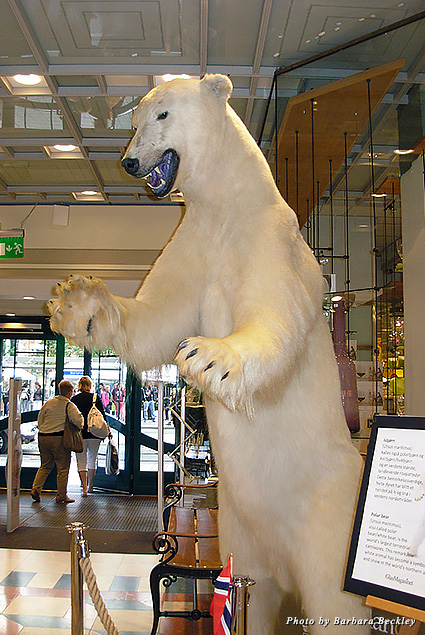 Stylish shops, of course, grabbed my attention. A taxidermy polar bear greeted me inside the Den Norske Husfliden store, known for traditional Norwegian products since 1891. I bought a reindeer fur seat mat. Reindeer fur is so thick Norwegians use the hides to sit on during hikes, picnics, and ski outings. Inside the UFF Underground basement boutique, I discovered wonderful vintage clothing, handbags, jackets, and even a few Norwegian national dresses (the intricate regional outfits worn on national holidays) from the 1960s and ’70s.

Dozens of museums were within easy walking distance. I used my Oslo Pass, which gives visitors free entry into more than 30 museums and free public transportation around town, to visit the Nobel Peace Center, the thought-provoking Astrup Fearnly Museum of Modern Art, the Museum of Architecture, the Ibsen Museum, the Holocaust Center, the Museum of Decorative Arts and Design, and the National Gallery, where I came face to face with The Scream. 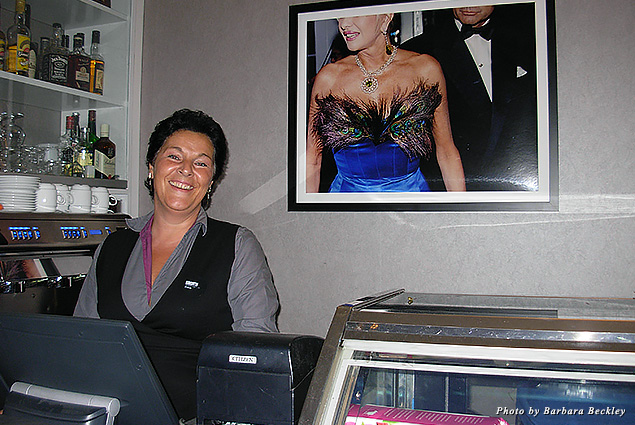 Returning to my hotel, I stopped for a wine in the sleek little lobby bar and was immediately mesmerized by the paparazzi photo behind the bar. It was vintage of two celebrities, a man and a woman. Maybe in Oslo? But it was cropped just below their eyes, so you weren’t sure who they were, even though their noses, smiles, and fashionably attired bodies looked famously familiar. I was reasonably sure it was Sean Connery. Or JFK. With Sophia Loren? Or perhaps Gina Lollobrigida. I never found out. But it sure sparked fun cocktail chatter.

For dinner, I joined the “in” crowd at Sjømagasin, a hip waterfront restaurant opposite the Thief Hotel in the Tjuvholmen district. As I waited to be seated, I saw three tall, blonde 20-somethings dressed in short-shorts and five-inch stiletto heels riding bicycles! Proof that Tjuvholmen is indeed Europe’s hippest piece of real estate. Inside, the restaurant’s contemporary open kitchen and floor-to-ceiling windows overlooking Oslo Fjord were a perfect match for fresh steamed blue mussels with white wine and chili, grilled sea trout with ginger, and glazed elderberries over vanilla ice cream. 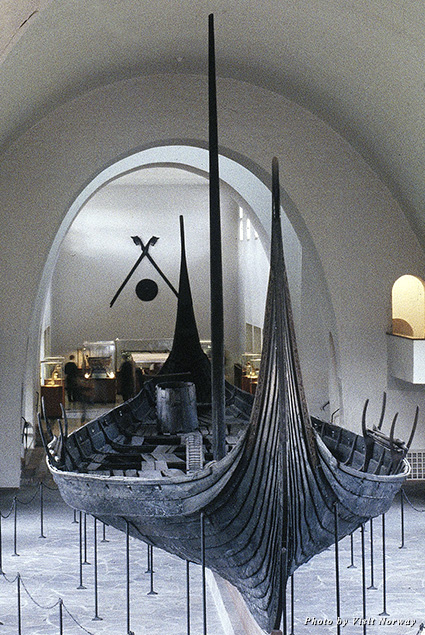 Oslo’s Viking history, world-class art, and record-setting sports came to life the next day on a guided van tour. Standing next to the massive Oseburg Viking ship—as pristine today as when it sailed the seas 1,100 years ago—was impressive to say the least. A docent told me that when it was unearthed in 1904, it was painted in bright colors. Unfortunately, the colors couldn’t remain during the ship’s preservation process. Today, it’s midnight black. The Oseburg is one of three Viking ships on display at the Viking Ship Museum. All were used as burial vessels for their noble owners. Being a woman, I was most pleased to learn the Oseburg contained the remains of two women, one 70ish and one 50ish. “Very powerful, wealthy women,” a docent declared.

From 800 to 1050 CE, Olso was a major Viking stronghold. Today, it’s Europe’s fastest growing metropolitan area and the leader in new architectural concepts. Viking ruins are being unearthed at record speed due to all the development. 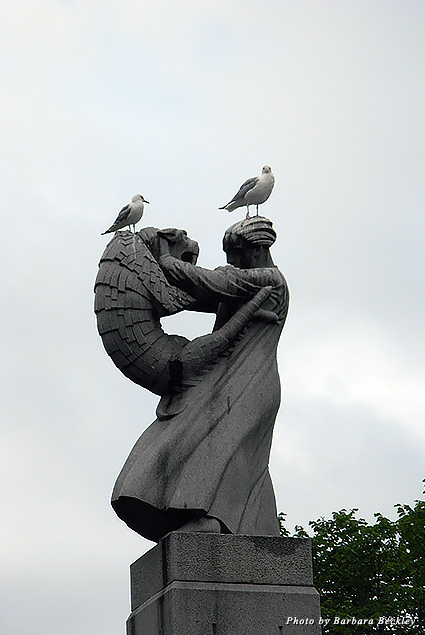 We’ve all seen it replicated in art displays and pictured in magazines—the Monolith by Gustav Vigeland (1869-1943) of interlocking nude figures rising to the sky. Seeing it in person at the Vigeland Sculpture Park (the world’s largest) within Oslo’s Frogner Park took my breath away. “Why nudes?” I asked our guide. “Because his works would never become dated by clothing styles.” More than 200 granite, bronze, and wrought iron works embody Vigeland’s life work. Comic relief from his portrayals of the human condition in all its emotions and stages was provided by the occasional sea gull perched atop a sculpted head. 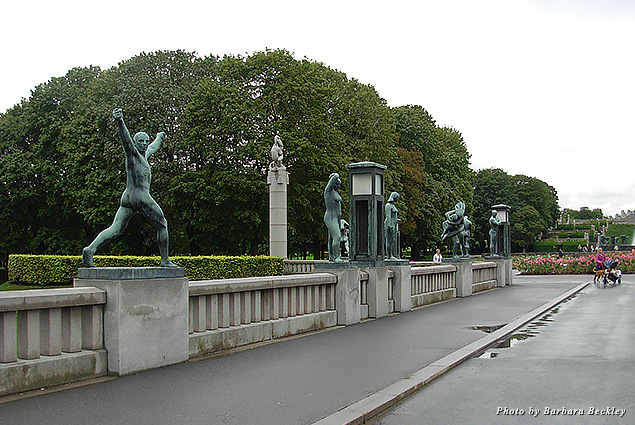 More surprises waited at the top of a posh hillside neighborhood overlooking the city and fjords. Here, the Holmenkollen Ski Jump, the world’s newest and most modern ski jump, rises more than 2,000 feet high and extends for more than 3,000 feet. Opened in 2010, it hosted the 2011 FIS Nordic World Ski Championships and will do so again in 2016. But it’s not just for winter thrills. I watched as joy riders zip-lined from the top to the bottom. Surely one of the most harrowing zip rides ever. 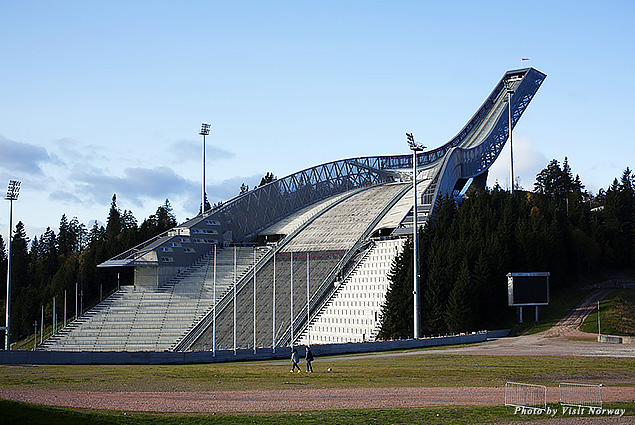 Not knowing Norway’s history provided an amusing moment of discovery, as I admired the statue of the late King Olav V, at age 80, cross-country skiing with his dog. It was a standard poodle! Perfectly puffed and coiffed and immortalized in bronze. Later in life, he and his poodle would take the streetcar up from the palace and ski into the woods, I learned. Well. My best girlfriend has a standard poodle. So I frantically searched the gift shops for mugs, T-shirts, or other memorabilia of the statue and poodle. Nothing—only a postcard of the statue, which she loved receiving once I returned home.

My final evening was spent perched above the city at the Ekeberg restaurant, a newly revamped hilltop icon. Inner Oslo Fjord, islands, high-rise buildings, and distant mountains spread out before me like a living map. No sports heroics were needed to get to this historic hangout; I took a taxi from my hotel and was there in five minutes. Built in 1927, the casually elegant restaurant is winning raves for its views and classic and modern cuisine.

I enjoyed the Jerusalem artichoke soup, olive-poached halibut and reindeer loin. And raised my glass to a perfect time in a perfect city.