Next to Normal: Welling With Emotions at SHN 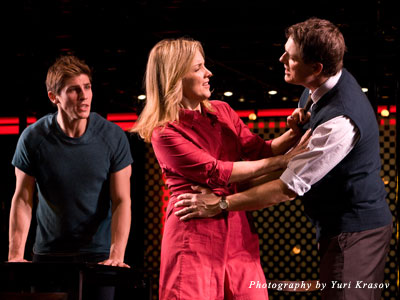 Forget the musical theater of yesteryear dwelling on love’s sweet struggles of boy-meets-girl. Next to Normal (music by Tom Kitt, book and lyrics by Brian Yorkey) brings on the sign of times.

Grief-induced mental disorder, psychiatric evaluations and treatments, and suburban family’s meltdown somehow elevate to the state of high art in this Tony and Pulitzer Prize-awarded rock musical, powerful enough to make grown men cry. Directed by Michael Greif and starring Alice Ripley (Diana), Curt Hansen (Gabe), Emma Hunton (Natalie), Jeremy Kushnier (Dr. Madden/Dr. Fine), Preston K. Sadlier (Henry) and Asa Somers (Dan) the show comes to San Francisco on its wildly successful national tour. Unorthodox lyrics and dialogs (“She was so high-spirited they banned her from the PTA,” or: “Most people who think they are happy are just stupid”) deliver unorthodox themes. Spouses are torn apart by a new kind of betrayal – for the sake of medical authority. “Superboy and the invisible girl” are vying for their mother’s attention in her dual-reality world. Her honest “I love you as much as I can” gives a new meaning to an ages-old theatrical exploration of freedom of love. An outstanding spectacle from beginning to end, Next to Normal features onstage band (conductor Bryan Perri), and exquisite set (Mark Wendland), costumes (Jeff Mahshie), lighting (Kevin Adams) and sound design (Brian Ronan). The show runs through February 20 at Curran Theatre, 445 Geary Street, San Francisco.