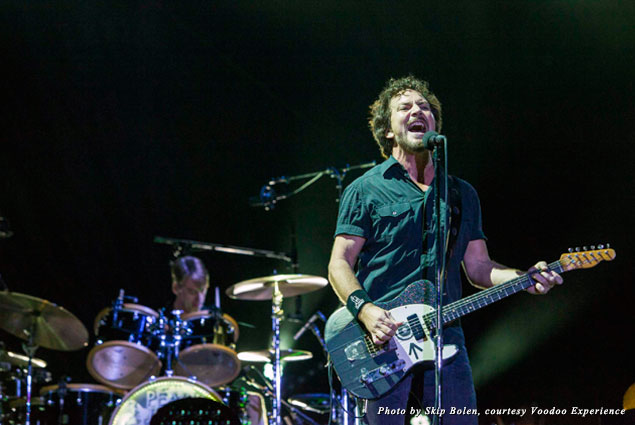 We came from all over the country (and the world) to “Worship the Music” at the 15th Annual Voodoo Music + Arts Experience in New Orleans, three days and nights chockablock with top performers, fascinating sculptural installations, and local culinary treats. We feasted on music, art, and everything from jambalaya to crawfish bread.

It all took place in NOLA’s City Park over the weekend of November 1 to 3, just after costumed revelers had filled the streets of the French Quarter for Halloween. In fact, costumes are a central part of Voodoo Fest, as the two celebrations always go hand in hand. So it was no surprise to see a sweet unicorn prance by, give a wave to Santa Claus, or suddenly feel we’d stepped into a scene out of “The Big Lebowski,” as the Dude, Walter, Donnie, and Jesus the bowler meandered past in the bright sunlight. Evenings (the fest goes from 11:30 a.m. to 11 p.m.) brought out the glowing hula hooping set, along with coats, gloves, and blankets as the temperature plummeted. It does get chilly in November in New Orleans! 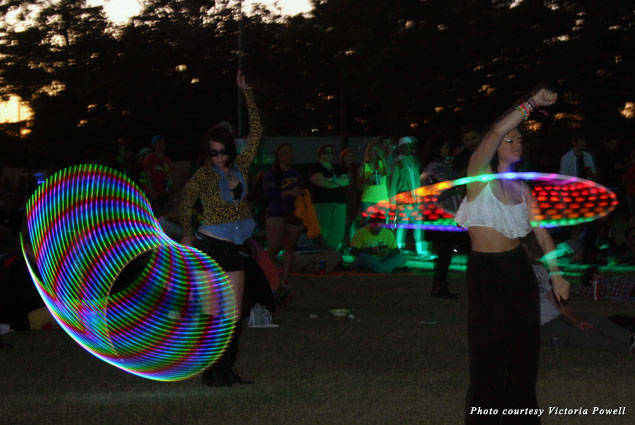 As the Friday shows began in the newly designated “festival” area of City Park, headlined on the main “Ritual” stage by Macklemore & Ryan Lewis and (later) Pearl Jam, the bad news about Voodoo’s new home quickly became painfully obvious. With four stages—“Le Plur,” “Flambeau,” and “Carnival” were the other three—all positioned extremely close to one another, the bleed of sound from one to the other was brutal. Especially since the Le Plur stage (which quickly became known as the “Rave” stage) was almost exclusively devoted to electronic dance music (EDM). With DJs such as Hello Negro, Boyz Noize, and Calvin Harris blasting out thudding baselines so deafeningly it made your teeth rattle, even Eddie Vedder and his Pearl Jam cohorts were hard pressed to shred their guitars loudly enough to overcome the wall of sound reverberating from that other stage. 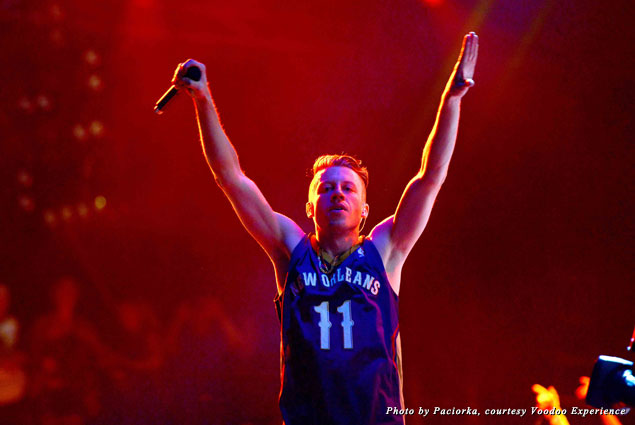 Over on the Flambeau Stage, up-and-coming, Seattle-based, blue-eyed soul/blues singer Allen Stone got in a terrific set that had a good-sized crowd boogying across the grass, but by the time local favorite Glen David Andrews hit the stage, he was drowned out by the Pearl Jam juggernaut going on literally right next door and so barely had any audience at all. Too bad, that, as the singer/trumpet player always puts on a lively, crowd-pleasing show with his signature funky, rockin’ beats that have a little bit of gospel thrown in, too. 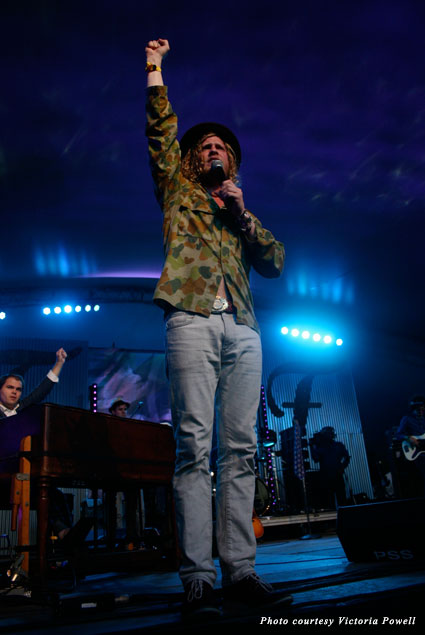 Saturday’s lineup was highlighted by a battle of electronica, as Trent Reznor’s Nine Inch Nails blasted out disjointed industrial sounds on the Ritual Stage while Afrojack attempted to break the sound barrier with a non-stop barrage of thumping house over at Le Plur. The dissonance reached a fever pitch at about 9 p.m., just as poor Billy Squier was trying to rock out all alone, with just his own electric guitar and a mic. The 1980s were good to the man who brought us the megahits “Everybody Wants You” and “The Stroke” back then; Voodoo Festival brought him to his knees as he turned his amp up to 11 and groused, “I know I can get louder than Nine Inch Nails!” But he couldn’t. 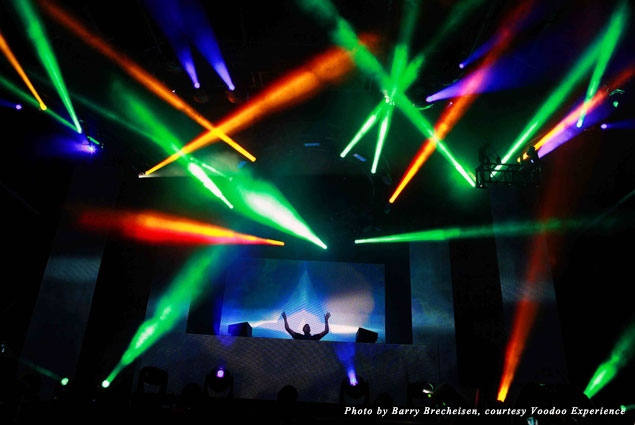 The ever-present thudding bass line kept on coming on Sunday, as rapper G-Eazy and then hip-hop indy rockers Matt & Kim brought their dissonant style to the main (Ritual) stage. Meanwhile, over at the ever louder and louder EDM-central stage—which was jammed all weekend with glazed-looking teenagers and millennials doing a perpetual, universal fist pump—Maxim (The Prodigy) and Beats Antique kept the thump-thump-thump at decibel levels as the gorgeous day waned. Over at the Carnival Stage, the Apache Relay tried to get their gentle folk-rock heard by the smattering of listeners, but that was a lost cause. 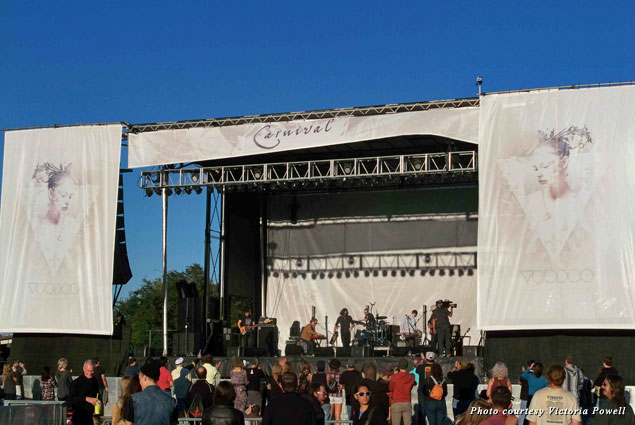 Happily, CC Adcock and the Lafayette Marquis came prepared: They lit up the Flambeau Stage with a raucous swamp rock set that had everyone dancing up a storm. But then the juggernauts descended on the Ritual Stage playing many of their fan favorites, as first Kid Rock and then the Cure cranked it up. They had to, for Bassnectar was true to his reputation, creating an ear-splitting thud that could literally be heard from miles away. Which meant that poor Dr. John and his all-star New Orleans band (Ivan Neville, George Porter Jr., Nicholas Payton, Smokey Johnson, Big Monk Boudreaux, etc.), who chose to play a set of quietly mournful, funky blues tunes, were completely drowned out in the battle of the (other) bands. 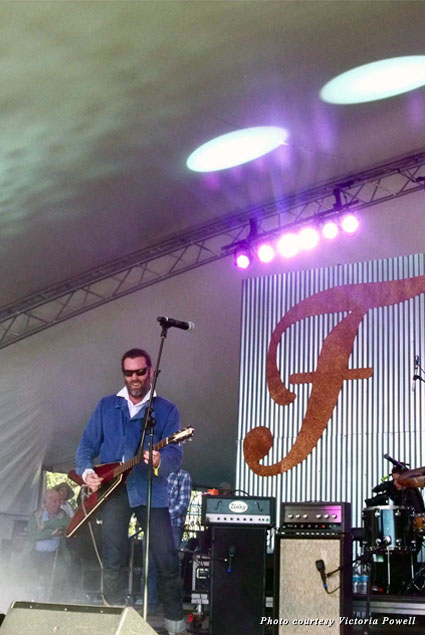 As the final day waned, festivalgoers rushed over to the incredible food booths, to grab one more plate of Drago’s famed charbroiled oysters or Miss Piggy’s delightful cochon de lait po’boy, then stopped and shopped inside the Voodoo “Church,” where branded merchandise reminded us all to “Worship the Music.” 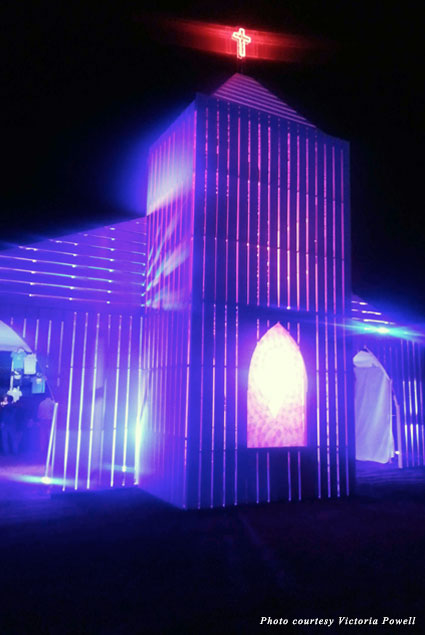 Which, of course, everyone who attended certainly does. But we just hope the organizers will remember next year to do just that, and thus find a way to make sure every band’s music gets the respect it deserves. That was woefully, sadly, not the case at the 2013 Voodoo Music + Arts Experience.

Take a Tour of Haunted New Orleans The Bourbon Orleans: One of New Orleans’ Best Hotels