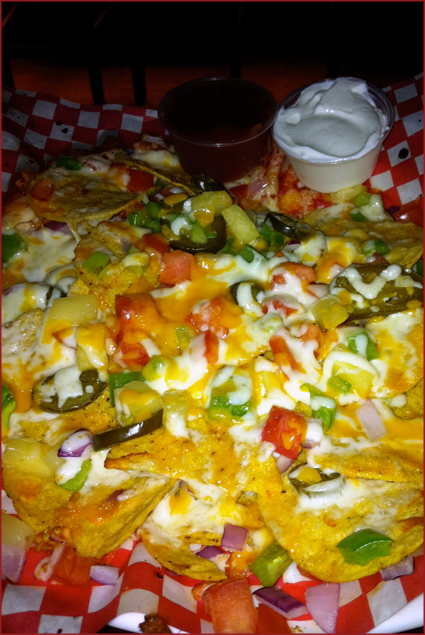 A couple weeks ago in late June, I filmed a commercial for Nova Scotia Tourism as part of the ‘My Nova Scotia’ campaign. On June 17th, I stood on the corner of Argyle Street across from Durty Nelly’s, in the same position for three hours…on two-foot-high apple crates. Yup, that’s 180 minutes without moving my lower body – which by the end was wrapped in a tarp to keep the wind off of my tender tootsies.

That was a pretty good move if you ask me. Two of my favorite (edible) things are melted cheese and a good bowl of chili. In the state I was in, a pile of chili topping a cheese-coated, salty corn chip was pure heaven. A bottle of beer made it all the more blissful.

When all was said and done and we wrapped shooting at 11 pm, all I could think about was a) a calf massage and b) nachos. By the time I dragged my tired carcass to Gatsby’s, I was ravenous and ready to storm the kitchen. Thankfully, my pal took matters into his own hands and ordered a platter of nachos and a bowl of meaty chili.

I feel as though I’d be doing With Bite readers a disservice if I didn’t say that the nachos were alright – I remember them being much better. They have all the good stuff: loads of cheddar and mozza cheese, red and green peppers, tomatoes, red onions, jalapenos and the addition of sweet pineapple if your palate so desires. I think I was just a tad underwhelmed because the cheese wasn’t thoroughly melted.

The chili was a pretty standard ground beef chili with the usual additions. The server was thoughtful enough to divide the portion into two smaller bowls – she knew where our heads were at. 🙂 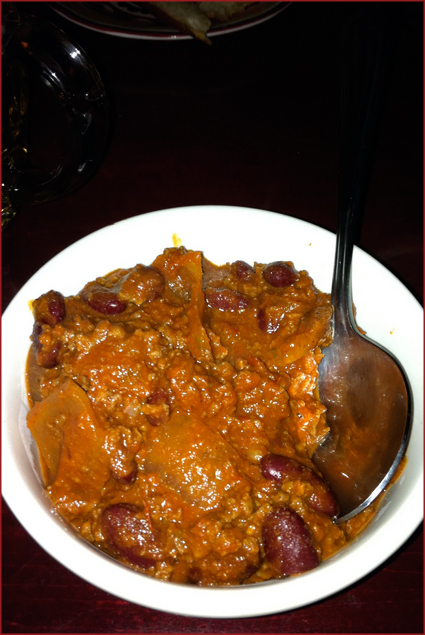 If this review sounds somewhat negative, it’s not my intention. Gatsby’s has consistently good pub fare, but it’s just that: Good. It’s not mind blowing, and it certainly isn’t gourmet, but it’s inexpensive, tasty fare that hits the spot just when you need it to.

When I’m in the mood for pub food and beer, Gatsby’s is pretty go-to, especially on Tuesdays when the apps are 1/2 priced. In addition to the ‘chos and chili, I’ve also had a tasty quesadilla and a nice bowl of mussels in a white wine-based broth.