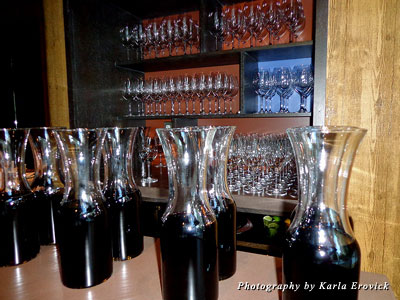 When I was invited to attend a Mystery Wine Dinner at Prospect in San Francisco, I was more than a little intrigued. Without knowing much about the evening’s activities, I was sure it would involve great food, interesting wine, and an evening of surprises. Upon arriving we were greeted and offered a glass of wine by our hostess Christie Dufault, sommelier for some of the highest-rated San Francisco restaurants, and the wine educator for the Culinary Institute of America. 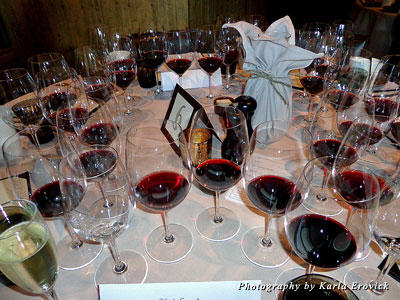 Eventually we were seated at round tables with five glasses of wine and given an overview of the evening, which was to include wine tasting and a multi-course meal. Most of the guests were extremely knowledgeable wine connoisseurs with very refined palates, honed from years of tasting. Under the circumstances it was difficult not to be a little intimidated, but I was up for the challenge. Our assignment was to work as a team to determine the country of origin, varietal of wine, and vintage. 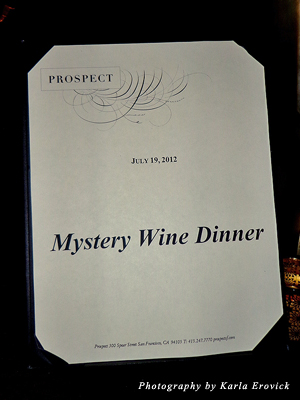 As we began to swirl, sniff, and sip the wines, the discussion became more animated. Not long after we began to unravel the mysterious wine, small bites to accompany the tasting were served. 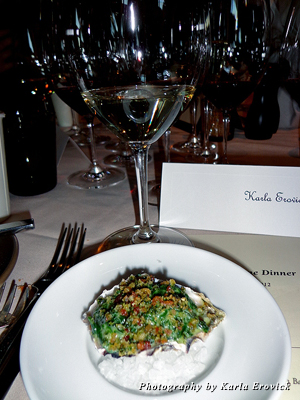 Our first course was an Oyster Rockefeller served with creamed spinach and breadcrumbs, which we decided paired with the white wine on the table, Wine “A.” The next course was a pan-seared scallop with corn pudding, red pepper beurre blanc, summer squash, and a crispy squash blossom and basil oil, which we also paired with Wine “A.” 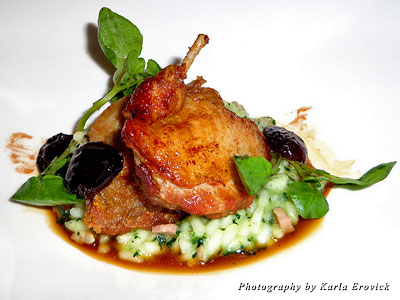 The next course, my favorite, was Wolf Ranch Quail with ham hock, cardanero risotto, mizuna, and watercress, with balsamic roasted big cherries and quail jus. We determined Wine “B” to be the right pairing and decided it must be a Pinot Noir. 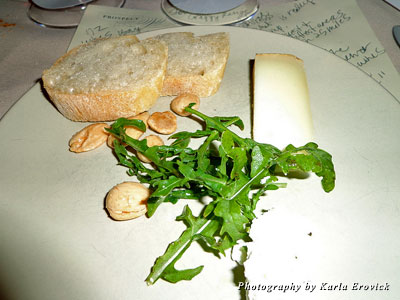 The fourth course was Snake River Farms Bavette served with haricot vert, potato fondant, and porcini mushroom jus, which we chose to accompany Wine “D,” which we believed to be a Super Tuscan. The final course consisted of a cheese plate of aged goat cheese and fresh chevre with arugala and marcona almonds. By this time, I had no idea which wine to pair with it, but really liked Wine “E,” which we decided was a Syrah.

There were three additional red wines to sample before our arduous task was complete. After a lengthy debate, we finally came to a consensus on the wine and felt confident in our choices. We believed most of the wine came from Europe, with only two from Northern California. When it came time for the reveal, much to our surprise, all of the wine came from the same winery – in New Zealand! Never in a million years would we have guessed that. 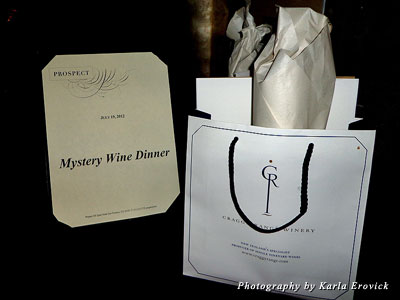 We finally had the opportunity to find out about the wines that had stumped us. Craggy Range Winery has been producing wine since 1999 with vineyards located in varying climates and geography, affording them the ability to produce a wide range of wine from their two production facilities.They utilize sustainable practices both in farming and the production of their wine. 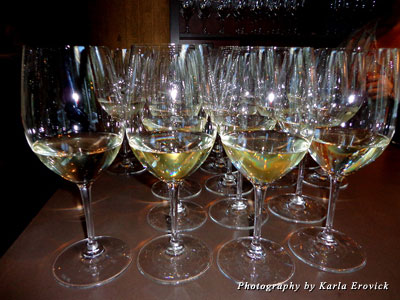 As the intriguing evening came to an end, guests happily chatted with the winemakers about the selection of wine. There was an overall feeling of contentment that came as a result of the  delicious meal, a wine adventure, and a mystery solved.