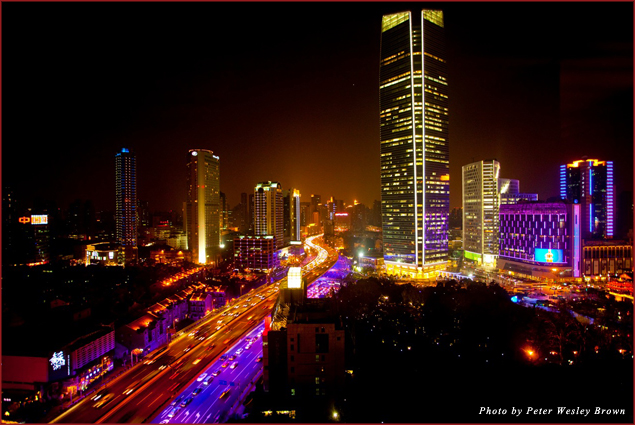 2012. The Year of the Dragon. It’s powerful, magical, mysterious, and energetic. It’s everything I want to be.

So it was natural to end up in Shanghai on a whim in February when the Chinese New Year was just ending. I had been on a whirlwind trip from Mexico to Miami to Milan and then to Shanghai. I was circumnavigating the globe with one Tumi carry-on bag (nothing new for me, although Milan and Shanghai weren’t exactly bikini weather, which is what was in the Tumi). Since I was going to be in the city for 10 days, I decided to try two different hotels in two different areas of the city: the ever-fabulous PuLi Hotel and Spa and its Design Hotels sister, The Waterhouse on South Bund.

Both a part of Design Hotels™, which represents and markets a curated selection of more than 200 independent hotels in over 40 countries across the globe, each was the complete opposite of the other. I was intrigued. More than a collection of hotels, the company is a collection of stories. Each property reflects the ideas of a visionary hotelier, an “Original,” someone with a passion for genuine hospitality and cultural authenticity, for thought-provoking design and groundbreaking architecture.

All “Originals” stand for the individual, aesthetic, and service-driven experiences that their hotels provide. Well, I was certainly an “Original,” so these were the spots to bed down for me.

When The PuLi (as it’s affectionately called) was described to me as an “urban resort,” I was sold. I love cities and I love resorts. What could be better? Designed to transport guests from their everyday lives into a world of luxury, combining traditional Asian charm with elegant contemporary design, The PuLi Hotel exceeded every expectation.

The 229-room property effortlessly combines the relaxation experienced in a resort escape with the excitement of a stay at an urban hotel. It’s no wonder that the intuitive team behind the hotel and spa is Urban Resort Concepts, a guest-centric hotel brand that promotes integrity of design and an understated elegance. I think I want to work for them. I speak their language. 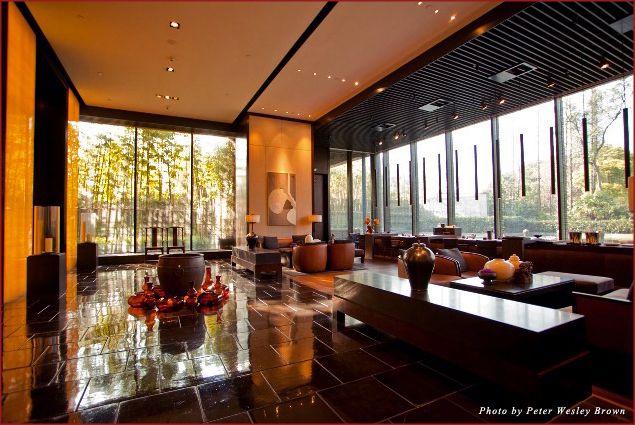 My guest room—well, let’s just say it was far larger than my TriBeCa apartment (not so difficult, actually). Style and substance was evident as I crossed over the threshold. It was comfortable and contemporary, with a definite nod to the past that never crossed the line to kitsch. Bose sound system, 32-inch LCD TV, lighting-fast wireless Internet, a Nespresso coffee machine and a rain shower. Heaven no matter where you are. 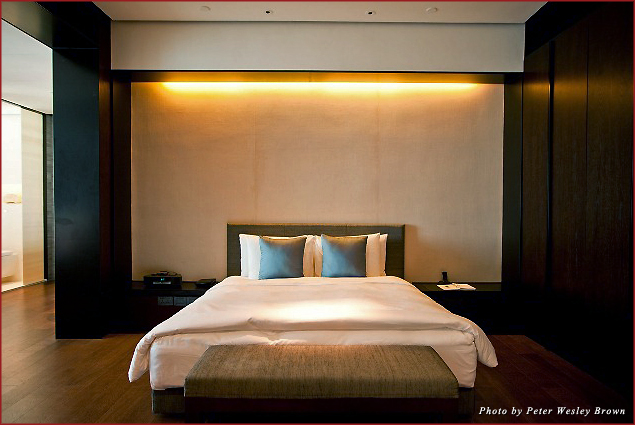 Being a Wanderlista, I dropped my bag and headed out the door. Choosing Level 3 on the elevator menu, I stopped in at their Anantara Spa, the first of its kind in Shanghai to be operated by this award-winning spa group.

The hotel’s distinctive sense of place was very much in evidence as I perused the treatment menu, took the tour though the facilities, and moved through the fitness area with the 25-meter lap infinity pool. My only regret was not having more time to indulge in the steam room and the experiential showers. 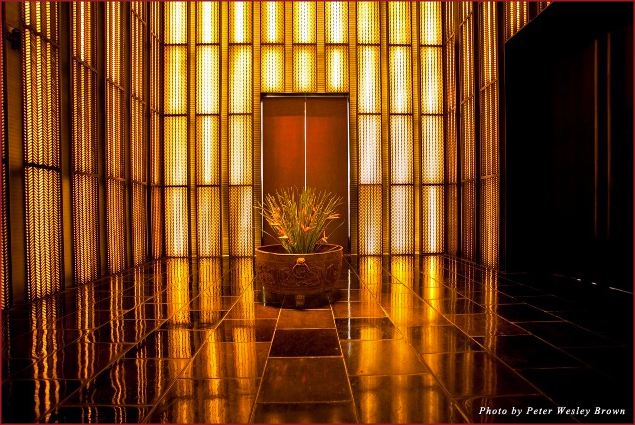 Back in the elevator, I pushed the button for Level 2, stopping in at Jin’An, the hotel’s signature 120-seat restaurant with a view as amazing as its menu. Dinner was tailor-made, picked from a menu that allows guests to explore, combine, and experience. I soon found out that breakfast would be an even more enticing event: I could choose from a buffet at the restaurant, en-suite service, or a breakfast-on-the-go, a priceless choice for global travelers who tackle the airways with a single carry-on. The night ended with a glass of bubbles at the very appropriately named Long Bar, 32 meters of wine and champagne by the glass.

The experience at The PuLi, located in one of Shanghai’s most beautiful and central areas overlooking the Jing’An Temple, is not only aesthetically bound. It is The PuLi’s incredible service philosophy, one that advocates going the extra mile for every guest, that really distinguishes this from other hotels I have visited in Asia.

Eager to embark on part two of my Shanghai Design Hotels™ experience, I headed to The Waterhouse at South Bund. Located next to Shanghai’s hottest cultural destination, The Cool Docks, The Waterhouse is a 19-room boutique hotel housed in what was once an unremarkable riverside building. Now, thanks to the Shanghai-based Neri and Hu Design and Research Office (NHDRO), it’s an extraordinary representation of the city’s cutting-edge design.

I have to absolutely agree with the description of a “disorienting yet refreshing spatial experience”—and I have quite the list of hotels to my name. Think being on the outside looking in, then being on the inside looking out. Hard to explain, but somehow the designers managed to blur the line between public and private without completely impinging on your privacy.

My room (Terrace Suite No 21) featured a deep concrete soaking tub, as well as a large walled terrace overlooking the internal courtyard. The hotel provides fluffy robes (nearly popped on a pair of pumps and headed down to the bar in mine) for swanning around in your room, plus lush bath amenities in Cultural Revolution-era factory-issued tin trays and cups. Furniture is a design fan’s fantasy, too, spanning contemporary offerings by Milanese maestro Antonio Citterio and pared-down Scandi pieces by Arne Jacobsen, Hans Wegner and Finn Juhl. 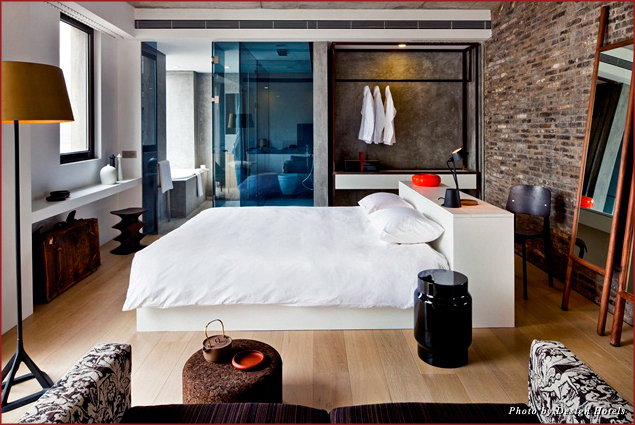 While the rooms fully reflect the polished gleam of Shanghai’s present, Table No. 1, the hotel’s casual restaurant, revels a bit more in the building’s industrial past. Communal-style tables of unfinished wood stand on grey brick floors; the main dining room and two private areas are actually in what was once a major shipyard.

The menu (consulted by Jason Atherton, the genius behind London’s Maze) is filled with dishes that embrace local cultures and traditions, sourcing local growers for the freshest ingredients. They also come in sharing portions, the better to encourage the informal dining experience. I became obsessed with the clams à la plancha starter, a tidy bowl of bacon-flecked razor shell clams in a deeply beautiful sea-salt flavored broth; it was an easy obsession. 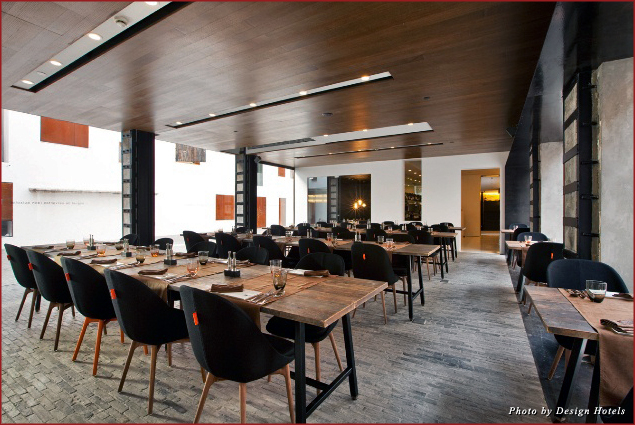 The Waterhouse at South Bund is actually made up of two buildings: the hotel, and a former warehouse converted into a multipurpose event space. With 743 square meters, it can hold up to 800 guests and has hosted high-profile affairs like the launch of International Home Décor and Design, the Shanghai Tang fashion show, and Hong Kong film director Wong Kar Wai’s A-list private bash. 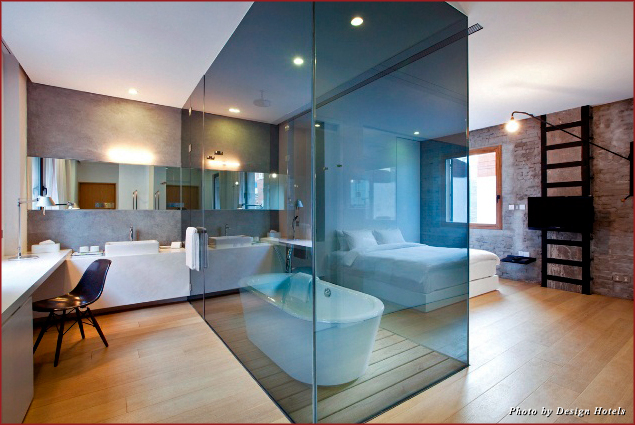 The hotel’s location was primo for me, minutes from the Shiliupu fabric market, where you can have your Dolce & Gabbana faves tailor-made for a fraction of Milan prices. It was a good thing I had only one carry-on, as the temptation of a new wardrobe was quite strong. 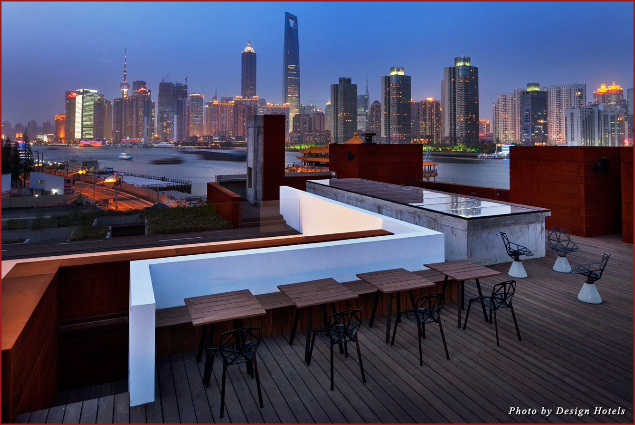 Ready to indulge in your own Shanghai musings?