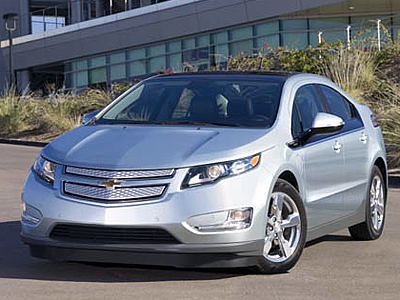 Sometimes in the life of a spiritual person come things that are really, really “of this world.” Things like “Mad Men,” chili-cheese fries, and now, Klout.

Klout is a potentially terrifying yet extremely awesome social media metric site that basically tells you how cool you are.

Not really.  Actually, it tells you how cool other people think you are by looking at many popular social media sites (not Pinterest, not yet, anyway) and aggregating how much you interact with others and how often you get reposted, retweeted, etc. Then it tells you, by giving you a score. A Klout score over 40 means you’re doing pretty well.  Klout score in the 70s? You’re probably the most influential person you know.

My Klout score hovers in the low 50s at the moment, which probably means I’m spending too much time in front of my new MacBook Air. Pause for a) geek moment and b) major gratitude to Greg for getting it for me.  I had been living in five-year-old computerland, which made things much too slow.

Why am I telling you all this? Because being a “valued member” of the Internet world of Klout comes with perks. And last weekend, Chevy loaned me a new electric Volt to try out. Let’s skip how cool the very idea made me feel.  I thought it was a great choice for someone who is woo-woo. It’s electric, uses up way less gas than regular cars, and it’s considered one of the most eco-friendly cars to drive.  Hopefully you, my faithful readers, will get something valuable out of my unbiased opinion.

The first thing I noticed was the plug. Yup, this one comes with its very own electrical outlet, and we plugged it into the garage (and when we got down to San Diego, in my aunt’s garage, too!)

They have charging stations all down the West Coast, at places like malls and gas stations, but since it takes at least four hours to charge (at 240 volts) and usually at least eight hours (at 120 volts) you’ve gotta be willing to hang out for a lot of hours. Suddenly, I was thinking of my car like my iPhone – leave it on overnight and then I’ll have the battery all day.

The electrical charge only gives you about 35 miles on the battery, and then it switches over to gas.  Unlike the recent hybrids, the gas drives the electric motor, but the only way to recharge the battery is to plug it back in; the engine doesn’t do the recharging for you.

This seems like a drawback in theory, but during the four days we put the Volt through its paces, the only thing we noticed was that we could get down and back from San Diego on about a third less gas than normal (we drive an Acura CL when companies aren’t giving us cars).

In fact, when we did go shopping – my cousin wanted a charcoal grill to go with his four gas grills (really) – we visited at least six stores over three hours and used no gas. None. Zero. And still had battery to spare.  That was pretty wonderful.  If you are a commuter with less than a 30 mile one-way trip and access to an electrical outlet, this would perhaps be the coolest thing since you learned to drive. 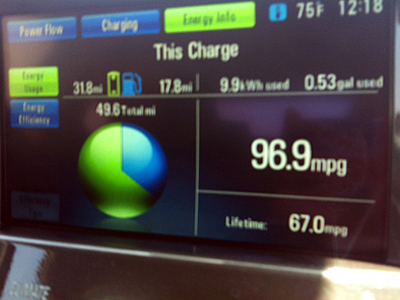 The car itself is beautiful. The back seats are comfortable and roomy, the hatchback has a window cut into it where the trunk normally starts, so you get extra rear visibility, and the car is the quietest thing I’ve been in, well, since taking a Prius out for a spin.

The dash features a large LCD screen (and a DVD player, presumably for catching up on Game of Thrones while stopped at red lights) that flips between the radio menu, energy output, and nav at the touch of a button.  It also offers you impromptu traffic reports whenever things start to slow, and an impressive backup camera mapping a wireframe of the car’s trajectory, whenever you pop it into reverse. Acceleration is good, and driving it is a silent dream.

Of course all this quiet got my math brain going. Sure the Volt only would raise my electric bill between $10-30 a month. But what about the big picture? The Volt’s sticker price is $40K (yes, you might be eligible to get up to $12K back in tax credits, but most of the woo-woo people I know run their own businesses, so they’re not exactly salaried).

If you save three-quarters of your gas bill a month, you might pocket around $2,500 a year in gas. So that could be four to six more years that you have to drive it until it saves you the difference between the Volt and the Prius (which is saving you a ton of gas in the meantime). Is this a fair comparison? I’m not sure. Driving a Jaguar, a Honda, or a Kia is a choice that has more to do with perception than reality.

All I know is that on Sunday morning, when I went out to pick up coffee, the neighbors were standing in the driveway across the street gawking. They asked me what kind of car the Volt was, and then absolutely cooed over it. I’ve never had that happen before, though Greg does get some nice compliments on the Acura. And this morning, I miss the Volt sitting in the driveway and not using any gas at all on trips of less than 35 miles.