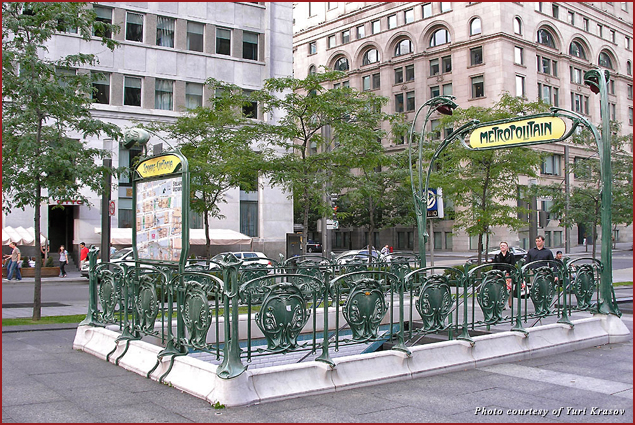 It didn’t look good, I knew it. I just opened wide to indulge in a juicy chunk of peach from a sample plate at the market when I heard a click of my husband’s camera. Oh well, I had to eat it up. Just a few hours remained til our flight home from Montreal. It was my last chance for that trigger moment that would bring back memories years after a trip ‘ a moment of pure enjoyment and appreciation for a newly discovered place that only travel can grant.

You know, Salvador Dali’s wife, Gala, cooked the couple’s pet rabbit into a stew when they were moving from Spain to France and weren’t allowed to take the animal along. When I first learned this fun tidbit of art history I was appalled…but not surprised. There are times when love is best expressed by devouring something. In my case, it was a yellow peach at Marche Jean-Talon. 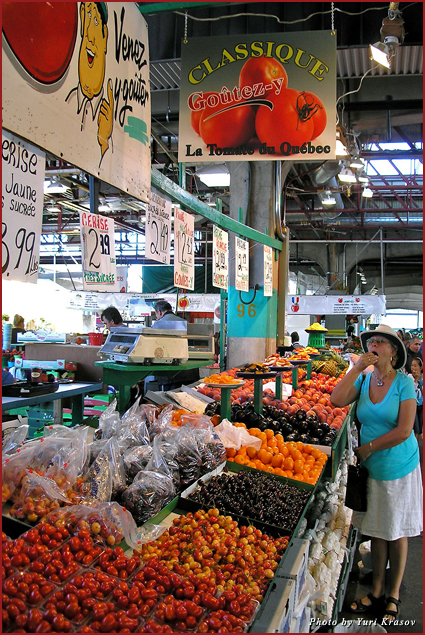 What brought me to the market was my insatiable curiosity about French cuisine and its intricate ways of influencing the very soul of an average gourmand. In two evenings in Montreal, we had two dinners prepared by French chefs ‘ at S Le Restaurant (Le Saint-Sulpice Hotel) and at Beaver Hall (Europea group). I asked Bernard L’Hote (executive chef) and Michael Cologgi at S Le Restaurant where did they get their ingredients, and they named the market. So, there I was, at the source of sorcery, so to speak. The counters were bursting with color, and the assortment of goodies went from fresh produce to canned foie gras and cognac infused rillettes in tiny glass jars. I knew that was a good start, but our scrumptious dinners from the previous nights had been so much more than that. 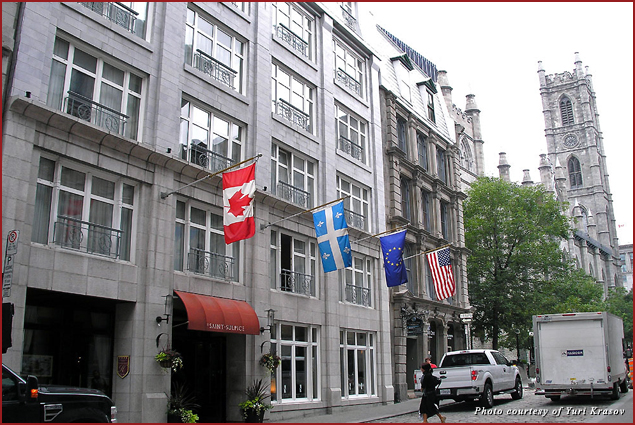 We stayed at Le Saint-Sulpice, the all-suites boutique hotel, located in the most charming part of Old Montreal, flanked by the Old Port on one side, and Rue Notre-Dame, with the 1829 namesake basilica on the other’ Saint-Sulpice is really special ‘ charming, cozy, and beautiful,’ said Diane Roch who works for the hotel… and we couldn’t agree more. Our suite was furnished like a modern dwelling where people live, not just stay, with a comfortable workstation, large screen TV, an inviting sitting area, and a compact kitchenette. From our balcony, we looked over a dining garden with flowers and a babbling fountain. And in a minutewe were off to dinner at the hotel restaurant, thankful for the opportunity to ‘eat in’, after a long journey. In the 1800s building, both the hotel and the restaurant carry on the charm of the past epoch, while conducting their business in a thoroughly modern manner ‘ efficient and accommodating. 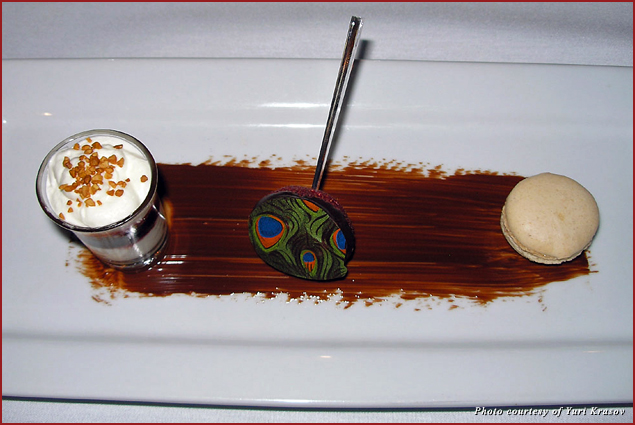 Our tasting menu started with a tomato gazpacho with snow crab puree, decorated with pea sprouts, elegantly served in a martini glass. Then tuna tartar (‘we get fresh tuna every 24 hours,’ said Laurent, our friendly waiter) was followed by a tender-flesh arctic char in carrot butter, succulent scallops in saffron sauce, decadent duck breast enhanced with fresh cilantro and radishes, and a veal chop delicately fried in clarified butter. A chocolate, praline, and macaroon dessert had a little peacock pattern, and a chocolate dipped strawberry on a side to better suit its name ‘ Palais Royal. Wonderful Arrogant Frog wines accompanied our meal, and energized us enough for a midnight walk around the old town.

Clean, safe,and civilized, Montreal is great for that old-fashioned joie de vivre of just walking hand in hand and breathing in its fragrant night air. We wandered across Place d’ Armes, looked at the statue of Paul de Chomedey de Maisonneuve, the founder of Montreal, and at the majestic Gothic Revival Notre-Dame. Then we walked past a temple-like building which appeared to be the Bank of Montreal, founded in 1817 ‘ the oldest banking institution in the nation, that has its own museum, and explored several narrow cobblestone streets around, glancing into gallery windows, abundant in this artistic part of town.

The next morning, a visit to a brand new spa, just steps from our hotel, was a revelation of sorts. First, we were reminded that SPA stands for Sanitas Per Aquam, which means health through water. Then, we learned that Scandinave Les Bains is the only spa in Montreal offering a relaxation method of the ancient Scandinavian baths with repeated cycles of contrasting temperatures water treatment. Designed by a reputable firm Saucier + Perrotte Architects, the facility is a site to behold, with marble and limestone floors, wooden ceilings, a pool and a waterfall wall. Combination bath/massage packages are appropriately named ‘Swedish,’ ‘Icelandic,’ ‘Baltic,’ and ‘Viking,’ and are offered along with Finnish sauna, hydro-jet bath, and eucalyptus steam bath.

For a quick lunch we stopped at Olive + Gourmando, following a suggestion from one of the knowledgeable locals. A super popular gourmet sandwich and pastry spot was crowded, but lively and friendly, with high communal tables and bar chairs, chatty young waitresses, and a hip pastry chef, Amy McKinnon, just leaving work after her 5 am morning shift.

Next on our tightly packed schedule was a tour of the city with a guide extraordinaire Ann Toth from Montreal City Tour Guides. We learned that those grand old buildings were made of gray limestone quarried right here in Montreal (one can still see perfectly preserved 400 million year-old fossils on city walls), that Victoria Station Art Nouveau Metropoliten sign was a gift from Paris, and that Raymond Mason used stratified polyester resin and polyurethane paint for his most photographed 1985 sculpture, Illuminated Crowd, in front of the downtown BNP Tower. Our guide told us that the majority of population in Montreal (the second largest French-speaking city in the world) knows more than two languages ‘ besides French and English people often use at home their native tongue. She speaks her native Hungarian, and also Spanish. Openness, diversity, and cultural exchange are prominent features of the contemporary metropolis, which is over 360 years old. We made a trip to the largest park in Montreal ‘ Mont-Royal, and looked at the gorgeous city from the top. 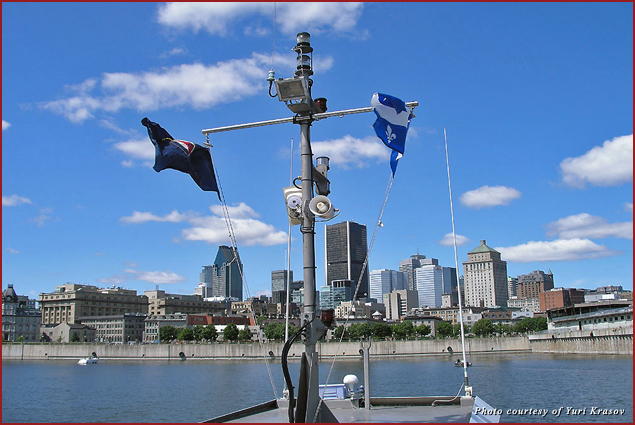 To admire it from another angle, the next morning we took a St. Lawrence River cruise with Croisieres AML, on a sunlit deck of Cavalier Maxim. Then, to take advantage of Montreal’s many annual festivals (more than weeks in a year), we got a couple of tix to Just For Laughs Festival, and thoroughly enjoyed Reverie, Simply Unspeakable ‘ a pantomime-based performance directed by Dexter Bullard with an incredibly talented cast.

Then there was still time for a Beaver Hall dinner, where Chef Executif Jerome Ferrer pulled his magic tricks with crispy duck confit wrapped in philo dough, pineapple and strawberry chutney atop heavenly seared foie gras, and some unparalleled tartar served Parisian-bistro style. A glass of Domaine Berenas Collines d’Oc 2005 from Southern France was probably just love potion, because after that I fell deeply, madly, truly in love with the city of Montreal.

That’s how I ended up trying to eat up a piece of it at the Jean-Talon market, hours before our departure. That was the moment not to be forgotten’ the trigger moment to keep for years, or’ until my next trip to Montreal.

10 Ways to Green Your Montreal Getaway