Montauk’s Sweet Beach Life: Heaven at the End of the World 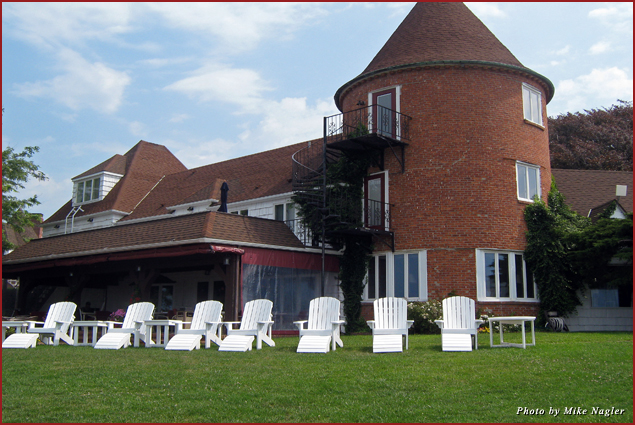 In California, where I’m from, we don’t know the power of the traditional summer vacation—the migration of souls, en masse, from the city heat and humidity to beaches and the casual land of time-off. On the West Coast, the summer air is cooler, there is no humidity, the nights cool off with a chilly fog, and we tend to vacation away from our own mild climate. But in New York—where the summer heat can be unbearable and the humidity can be drenching upon stepping outside the front door—the migration-escape is a much-needed respite. 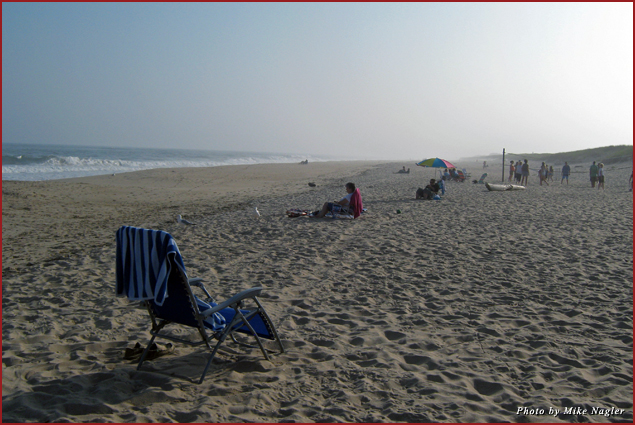 Montauk is the ultimate escape. At the far end of Long Island—it’s affectionately called ‘The End’—it still has its hippie-surfer roots, its fishing-village vibe, and its long-time locals. The breezes come up, even at the end of a hot day, and the evenings are mild and warm. The water—spectacular in its body-surfing, Pacific-like cresting waves—is a joy. There is a distinct feeling of an end-of-the-world peace. It’s a never-out-of-our flip-flops by day, groovy-music-and-food-scene by night—and the pace is just right.

The delicious thing about Montauk is its beaches—they stretch from end-to-end—city beaches, state beaches, hidden beaches, residential beaches—on both sides of the tiny peninsula. 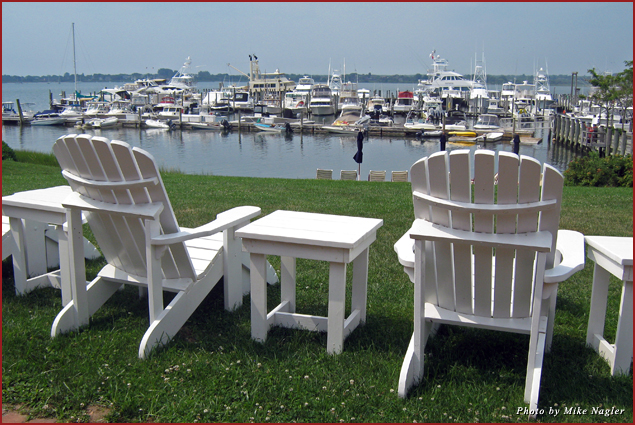 On our recent July visit, the town was just beginning to fill up with vacationers—the campgrounds were full, the inns were packed, and the hotels were full to the brim. The highway was at a crawl by Wednesday on the traverse out. (A good note is to try for midweek if you’re coming in mid- to late-summer.)

A few decades ago, when the stone’s-throw-away Hamptons were the end-all destination, Montauk was authentically downscale and still funky. Now it has found its hip sea-legs, and July and August definitely bring the Wall Street banker-turned-sometime-surfer, the expensive rental-house set, and the expansion of the Easthampton crowd—but just like New York City, it’s still a terrific mix. Montauk is still a place you can go and hang loose—lounge on the beaches by day, eat upscale or down at night, and sleep well all night long at your seaside inn. Families, couples, surfers, and locals all blend together for a beach-community feeling that’s open and inclusive. 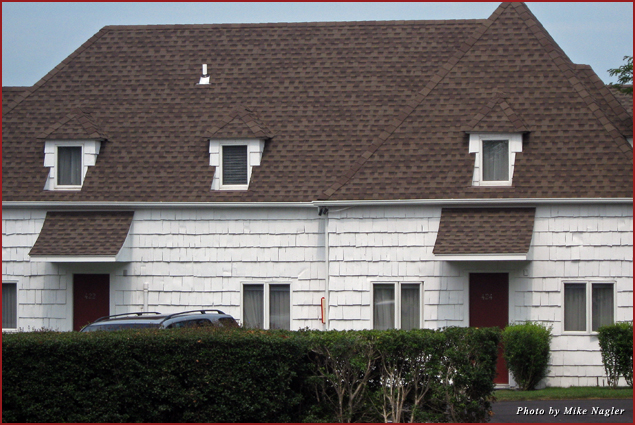 We flew into JFK from the West Coast and rented a car (you need one if you want to explore beaches). We hit the road directly, heading out on a Monday evening. The drive is two-and-a-half hours, so settle in and watch the scenery change from city to gritty suburb, to woodsy terrain, through the charming and beautiful Hamptons, and finally, out to the beaches. 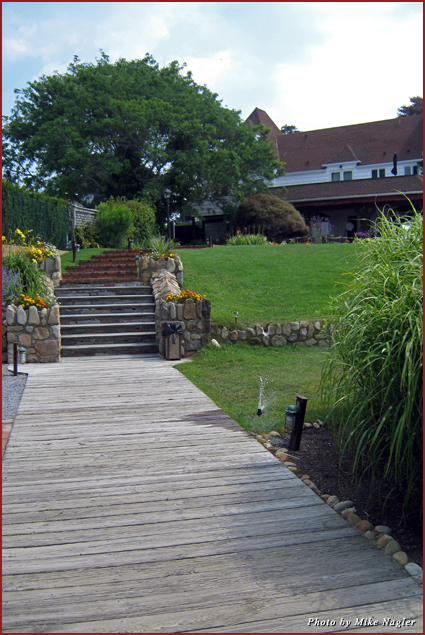 It’s obvious that many people make the trip to Montauk’s beaches every year, which means one thing to the novice east-coast traveler: reservations. Since we decided to make the trek just a month before our end-of-July destination date, we were scrambling to find something affordable. The inns were full. The beach motels were packed.

Finally, after a kind referral from a local friend, we found the Montauk Lake Club—a spectacular private inn and yacht club just northeast of town and close to the lighthouse. 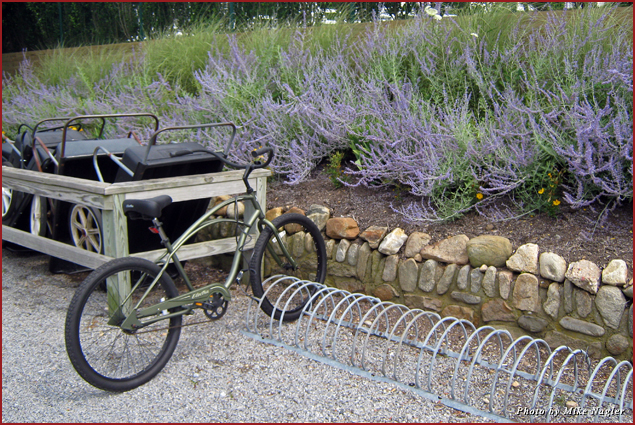 We were graciously given a midweek special, and for about $230 a night got a terrific, simple room in a spectacular locale. (If we had booked early—I’m guessing as early as last summer—we might have found one of the $125-$160 per night seaside inns available near the water and south of town, or a cheaper motel in town, but once we laid eyes on the Montauk Lake Club, we were thrilled to be there. It was worth every cent.) 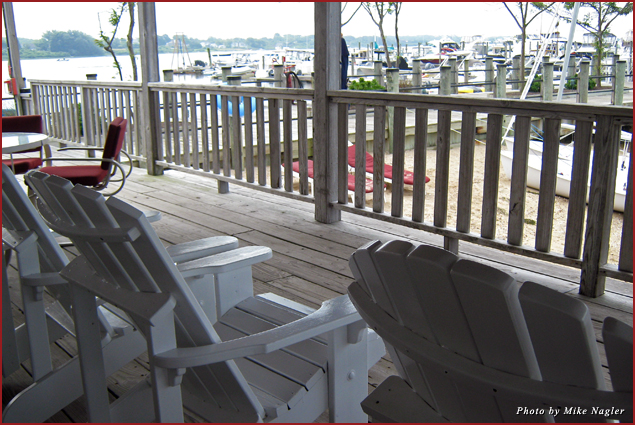 The Lake Club is situated on an inlet “lake” which flows in from the Atlantic’s Block Island Sound to the west—which essentially means that we were surrounded by water on all sides. The staff is sweet and attentive, the grounds are lush and beautifully attended (though the relentless use of leaf blowers in the morning is annoying), and the huge brick-surrounded, vine-covered pool is just steps away from the lake. 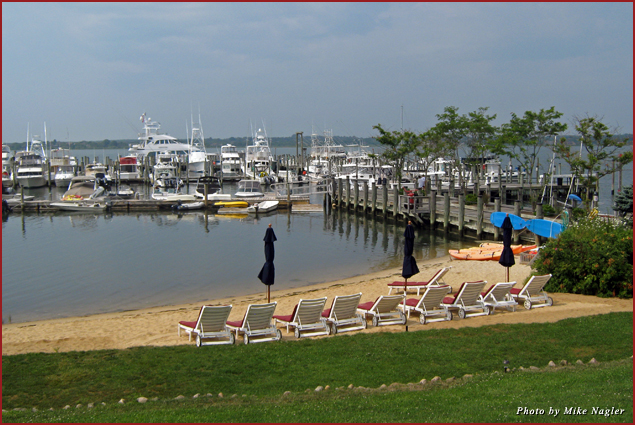 It is a special joy to have breakfast (continental, included) sitting on the stone porch overlooking the yacht harbor. It’s all sky and water, view and charm at the Lake Club. We felt like we were visiting another country—slow-paced, quiet, gracious, and rich with delicious scenery. 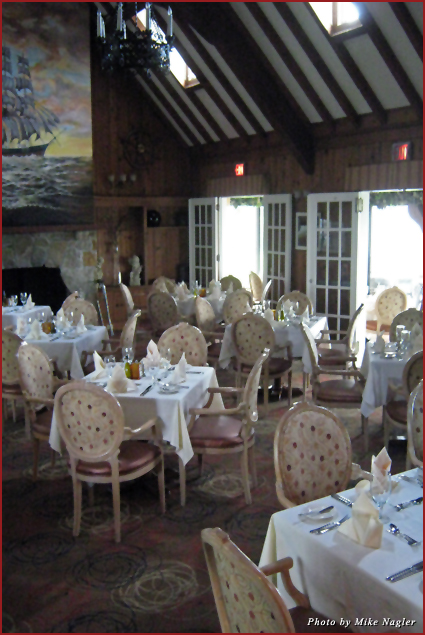 Wandering into town, Montauk showed itself to be all about its beaches. Wonderful! We quickly found the Sunset Surf Shack, just off the main drag within walking distance to the city beach and staffed by two lovely young women from Eastern Europe. We rented chairs and umbrellas there ($10 per chair, about $12 per umbrella) and headed out to lounge. On the way, we found the Continental Market for breakfast, with authentic South American specialties, and the Naturally Good Café just next door, with smoothies and organic treats. 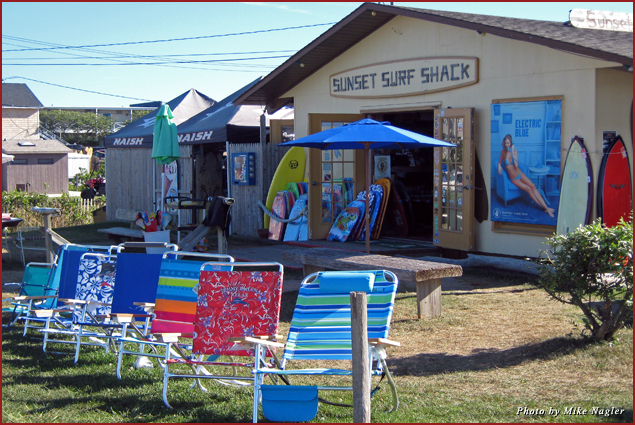 One of the first things we noticed as west-coasters was the deep level of local tans. On the northern Pacific coast it’s freezing in the summer, and no one who lives near a Northern California beach is brown. Here, there was a golden glow on skin from beach to beach—and it was a great throw-back to our college beach days, reminding us to give ourselves up to long, languishing hours with nothing to do.

Vacationers hang out at the beach, all day, with an umbrella, a chair, a good book, and buckets and shovels for the kids. It‘s relaxation at its finest, and the views and fresh air alone serve the soul like nothing else.

Our first state beach visit was to Hither Hills—just south of the town, and where our good friend Mitch has worked the lifeguard stand for summer after summer. It’s a beach with a good kick and strong undertow (one that will slam you to the watery turf just like the Pacific), and its vistas extend for miles down the coast.

We settled in and spent the whole day there, grabbing sandwiches, chips and beer for lunch at the local beach shack (about $18 for two). Fitted with full bathrooms and showers, the beach had everything we needed. (There’s a $10 fee to park for the day, with a general store and a playground for kids.)

Venturing out in the evening with our local friends Mitch and Alexis, we headed to the Inlet Café, just down the road from the Lake Club on East Lake Drive. For about $30, I had a 1-1/4 pound lobster in traditional east coast style with corn-on-the-cob, drawn butter, and baked potato. The scallops were also delicious. The view, looking out towards the sound, was phenomenal, and the cocktails were ample.

On day two we discovered “Gin Beach” just off to the side of the Inlet Café’s parking area. A much less populated beach, its breakwater provides a lovely little sheltered rocky-edged beach that’s a little cooler in temperature than the east side of the Montauk’s peninsula. (Parking pass required; get one from your hotelier if possible.)

For a more authentic, old-school repast, we found the Clam and Chowder House that night—not easy to find, in an old harbor off the side of the road. Restaurant food in town is all about fish, and pricing is on the upscale side, even in the funkier spots—unless you find a roadside “shack” like the Lobster Roll in Amagansett. ($12-20 on average.) Always clear about our finances on vacation, we set aside a fixed amount for dining and daytime food, and the preparation was worth it.

The next day was cloudy and rainy—a summer event we also don’t see much of on the West Coast—so we took the day and rambled into Easthampton. Lunch at Citarella, shopping at The Shoe Inn (the staff of which graciously mailed home an on-sale pair of shoes for me), and some hours in the local bookshop killed the morning, and by afternoon, when the clouds cleared, we were back at Hither Hills for a little more sun and a romantic sunset.

Dinner that night was a group of six at the Harvest—a beautiful setting with marsh-like views and a local garden from which comes many of the vegetables on the menu. The restaurant pricing ranges abut $22-40 per appetizer and $40 and up for entrees—but don’t be scared off: the portions are huge, so a family-style shared dinner for six, plus cocktails was just over an affordable $150.

The next morning we drove out to the old lighthouse on Montauk Point—the easternmost point in New York with a solitary, edge-of-the-world expanse stretching out to its eastern and northern sides. I could feel the land and the wind in another time—a time when ships came exploring and washed up against unknown and undiscovered continents.

Our favorite sunset was a spectacular Sunday night event at the local hangout, the Surf Lodge. The Lodge overlooks Fort Pond, and on the night we were there a local band played out on the deck, big pasha couches in the middle and rays of sun beaming down as the local color sang and played for us. The place has its roots in clapboard, and its earthy, quaint vibe of ‘hip” charmed us. So much about Montauk is deliberately charming—not accidental, and certainly scaled up for a savvy clientele—but the foundation that the whole town stands upon is still visceral, still sensually alive—fishing village, outpost, beach town, surfer-haven.

After less than a week in the sun-filled beach life of Montauk, we had found our heaven: the sun had tanned our skin, the views had soothed our minds, and the sea had unwound our souls. Montauk had brought us an unfurled, uncomplicated, easy, beautiful respite at the edge of the world. We’ll come back again and again.

Inlet Café
Take East Lake Drive all the way to the end of the road, restaurant is on your left

Take a Peek at the Panoramic View Resort and Residencies