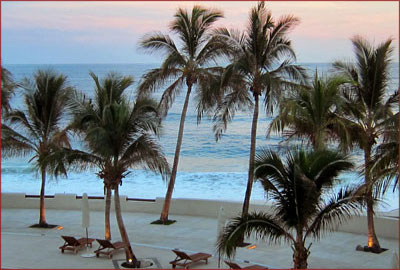 We decided to head to Cabo San Lucas, Mexico once again and see firsthand what the luxurious, romantic, and very private Marquis Los Cabos was all about. As we neared the resort, we noticed a beautiful and imposing fountain. We were told it represents the landing of the angels.

As the story goes, angels travel the sky, and if something catches their attention they land. If the surroundings match the beauty of their home, they will honor you with their stay. It is said that the serenity and peaceful beauty of Marquis Los Cabos have made it one of their favorite destinations.

Our magical adventure at Marquis Los Cabos had begun.

We settled into our grand master suite with spectacular views of the crystal blue waters of the Sea of Cortez, and went downstairs to meet Vania Castro, who walked us through the resort’s amenities. 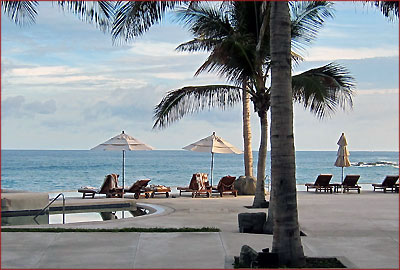 It was clear that the luxury resort was a retreat like no other.  Its 203 junior suites and 28 casitas are complemented with a 36-foot waterfall and more than four pools. An extensive art collection and specially commissioned oil paintings and bronze sculptures by leading Latin American artists are featured in each suite. 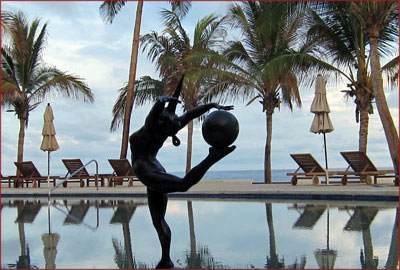 The resort is run by veteran hotelier Ella Messerli. Ella began her career with the Westin Camino Real Hotel in Mexico City, and has worked for industry leaders such as Las Brisas, the Mandarin Oriental, and the Inter-Continental in the United States and Latin America.

The day starts for guests of Marquis Los Cabos with a complimentary breakfast of coffee, fresh fruit, and a bread basket delivered to an alcove next to each door.

The resort features three restaurants headed by Chef Thierry Dufour, including the intimate Canto del Mar. Chef Thierry, who has a two-star Michelin restaurant in France, described his vision as “simple, elegant, with an exotic touch.” 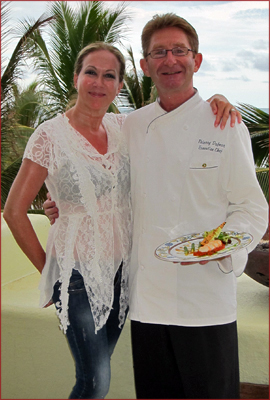 With a mischievous smile, he led us to the outdoor dining area. We could sense his excitement and joy at what was about to come. A gorgeous dining table set with elegant French flatware, fine crystal glasses, and gracefully hand-embroidered napkins awaited us.

Under his watchful eye, we enjoyed the second course, an enchanting-yet-savory “consommé de beouf.”

The third course and piece de resistance was a gastronomical delight. The juicy filet mignon with celestial flavors was fit for the gods.

The resort also features a 15,000-square-foot spa, which is one of the largest in Los Cabos, and features holistic treatments that use indigenous ingredients such as rare cactus oils, sea salt, and agave. Signature body treatments include the Tepezcohuite Relief – tepezcohuite was used by the Mayans to treat skin injuries. 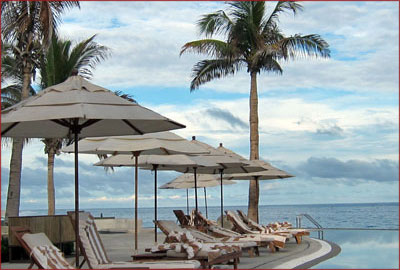 Even though it’s a luxury resort, Marquis Los Cabos is on the cutting-edge of the green hotel movement. It has its own desalinization plant which supplies the rooms with treated seawater, and a plant that processes wastewater which is then used in the gardens.

The rooms have energy controls which activate the electricity with the door key and automatically turn off the air conditioning if the balcony windows are opened. The resort uses an organic laundry detergent made of nopal (cactus), composts its organic waste, and has decreased its water usage by 60 percent.

The beach at Marquis Los Cabos is considered a protected turtle beach. Each year several turtles lay their eggs there. The eggs are safeguarded until they hatch.

The Marquis Los Cabos is a rare gem. The angels have found their paradise on earth.

Why Cabo San Lucas Is the Perfect Girls Getaway Destination